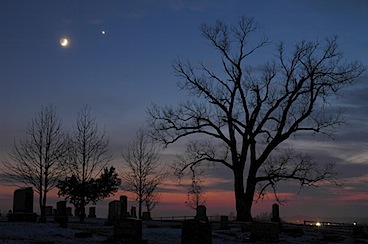 There will be fearful sights and great signs from heaven. (Luke 21:11)

IT was about two years ago that I first noticed it. We were standing on a hill at a monastery when I looked up, and there in the sky was a very bright object. “It’s just an aircraft,” a monk said to me. But twenty minutes later, it was still there. We all stood stunned, amazed at how bright it was.

Two years later, this object seems to be growing in brightness, and it has caught the attention of some astronomers. It is the planet Venus. It is usually brighter than other stars and planets. But there is something extra-ordinary about it now, and it’s become the buzz of many online forums. An 83 year old priest I know recently pointed it out to a few of his parishioners saying that he was watching it with interest. If someone who has been around that many years believes it to be unusual, perhaps there is something more than meets the eye.

Jesus tells us that there would come a time when the earth would reel and the cosmos respond when the Church was in apostasy. That is, nature itself, on earth and in the heavens, would respond to the depth of mankind’s sins. Is Venus, perhaps, part of these visible cosmic signs?

Because of it’s brightness, Venus has become known as either the “Evening Star” or the “Morning Star,” as (depending upon where it is in orbit) it heralds either the twilight, or the dawn. “Morning star” is a term familiar in Scripture. In the Old Testament, the 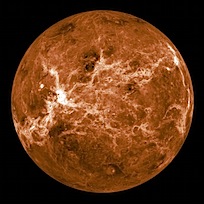 Church Fathers attribute this passage as referring to Satan:

How have you fallen from the heavens, O morning star, son of the dawn! How are you cut down to the ground, you who mowed down the nations! (Isaiah 14:11-12)

I have observed Satan fall like lightning from the sky.(Luke 10:18)

Instead of “morning star,” the Latin Vulgate uses the word “lucifer” which means “light-bearer.” The point here is that Satan is a fallen angel who at one time reflected the beauty of the Creator. I say this because Jesus Himself also bears this title:

I am the root and offspring of David, the bright morning star. (Rev 22:16)

Last year, I heard in my heart the Lord say,

First the Evening Star rises, and then the Morning Star.

Satan is being permitted to rise again, but this time, as a false light. He is rising against one who also bears the title of Morning Star—the one who replaced Lucifer’s glory in creation—the Blessed Virgin Mary. The Church Fathers have also given her the title “Morning Star” for she is “the woman clothed with the sun” (Rev 12:1), perfectly reflecting the light of Christ. She is the one who will extinguish this false light with her heel (Gen 3:15). Satan is rising as the Evening Star to herald the Night—the time of Antichrist. Mary and her offspring, however, will rise as the Morning Star to herald the Dawn, the rising of the Sun of Justice and the dawning of the Day of the Lord.

It is interesting to note that Venus’s orbit around the Sun, over an 8 year cycle as viewed from the earth, forms the pattern of a pentagram, which, of course, is a satanic symbol.

You may or may not have noticed the advertisement which came out in the Wall Street Journal and other publications around Christmas time. It spoke of one who is coming who is an answer to the world’s problems. His name is Lord Maitreya, known as the “new age” messiah. He is a character I believe we may need to take seriously since Scripture warns that there will be false prophets who not only claim to be Christ, but will produce false signs and wonders. This is what the article said:

Look now for the biggest miracle of all. In the very near future a large, bright star will appear in the sky visible to all throughout the world—night and day. Unbelievable? Fantasy? No, a simple fact. Around a week later, Maitreya, the World Teacher for all humanity, will begin his open emergence and—though not yet using the name Maitreya—will be interviewed on a major US television program. Awaited by all faiths under different names, Maitreya is the Christ to Christians, the Imam Mahdi to Muslims, Krishna to Hindus, the Messiah to Jews, and Maitreya Buddha to Buddhists. He is the World Teacher for all, religious or not, an educator in the broadest sense. Maitreya’s message can be summarized as “share and save the world”. He will seek to inspire humanity to see itself as one family, and to create world peace through sharing, economic justice and global cooperation. With Maitreya and his group working openly in the world, humanity is assured not only of survival but of the creation of a brilliant new civilization. —MarketWatch, LOS ANGELES, Dec 12, 2008

Is the star they are speaking of the “Evening Star,” Venus? It is worth noting that Albert Pike, who wrote Morals and Dogma, the ritualistic book for the Freemasons, often referred to how the Mason’s and/or Illuminati brotherhood planned their “events” around the orbit of Venus. These are the organizations which are recognized as co-ordinating (as best as humanly possible) a New World Order. Is it coincidence, then, that as world leaders across the globe are calling for a New World Order in the midst of economic chaos, that Venus is getting extraordinarily brighter?

This is not to say that Maitreya is the Antichrist. However, we are entering a period now when we are going to see many more false prophets, if not the False Prophet of Revelation, come onto the scene. Jesus also warned that there will be others who will claim to be the Messiah:

False messiahs and false prophets will arise, and they will perform signs and wonders so great as to deceive, if that were possible, even the elect. (Matt 24:24)

THE GOD OF THE UNIVERSE

So, how is Venus becoming brighter? The most obvious answer is that the closer Venus is to earth, the brighter it is. Also, Venus enters phases like the moon, and is presently closer to being full than crescent. However, this still doesn’t explain why Venus seems to be brighter than anyone can remember it…

Consider that the powers that be are, through current astronomy, able to know and predict the behavior of most objects in our galaxy. It would be very easy to manipulate this knowledge to coincide with a terrestrial event. For instance, the article above states that the “bright star will appear in the sky visible to all throughout the world—night and day.” On March 25th this year (on the Feast of the Annunciation), an extraordinarily rare event occurs when Venus will be seen in the twilight and in the morning. It will be seen both at night and at day. Again, my point is that we need to be aware that there are coming some very powerful false “signs and wonders” which are going to deceive many. Whether it is Venus or other planetary objects or even a comet, it is certain there are going to be more signs in the heavens.

But remember this: it is God’s universe. He is the Author of creation, not Satan. What happens in the universe is by God’s design, by His permission. Celestial events today were set in motion from the beginning of time. He is in complete control, though that control does permit the free will of men to reap what they have sown. This too He knew when He set the stars upon their course…

The very moment when the Magi, guided by the star, adored Christ the new king, astrology came to an end, because the stars were now moving in the orbit determined by Christ. —POPE BENEDICT XVI, Encyclical Letter, Spe Salvi, n. 5

There is a tsunami of deception coming. As I wrote in The Coming Counterfeit , I believe that after the Illumination (the Sixth Seal of Revelation), a False Prophet will paint this miracle of God’s mercy, not as a Divine encounter with Jesus, but an encounter with “the Christ within” (meaning we are all gods moving to a “higher plane of consciousness.”) Interesting that within occult circles, Venus is known as “the great light of illumination.” However, this is not the illumination of the Holy Spirit, but of the false light and Shining Darkness, Satan. The world is ripe for this deception.

In the very near future, people everywhere will have the opportunity to witness an extraordinary and significant sign, the like of which has been manifested only once before, at the birth of Jesus… this mysterious event is a sign, and heralds the beginning of Maitreya’s open mission… How will viewers respond? They will not know His background or status. Will they listen to and consider His words? It is too soon to know exactly but the following may be said: never before will they have seen or heard Maitreya speak. Nor, while listening, will they have experienced His unique energy, heart to heart. —www.voxy.co.nz, January 23rd, 2009

It is said that Maitreya will “telepathically” communicate to people who see him and that there will be many physical healings. Remember, however, that many sicknesses are demonic in origin, as the exorcists in the Church can attest to and the Gospel accounts reveal. It would be very easy for demons to simply “withdraw” creating the impression that people are healed, and that Maitreya is the Christ.

We don’t know really who this figure is. To draw any hard conclusions could distract us from other real deceptions. Perhaps Venus is simply another sign pointing to the need to be very vigilant, for events in the world are unfolding very quickly now. But standing by our side is the Blessed Mother, the true Star, to guide all those who enter the Ark of her Immaculate Heart to safe harbor. I’m wondering if those who posted that article in the Wall Street Journal knew that it was printed on the same day as the Feast of Our Lady of Guadalupe: Star of the New Evangelization?

Yes… God’s always a step ahead. We just need to make sure we’re in step with Him.