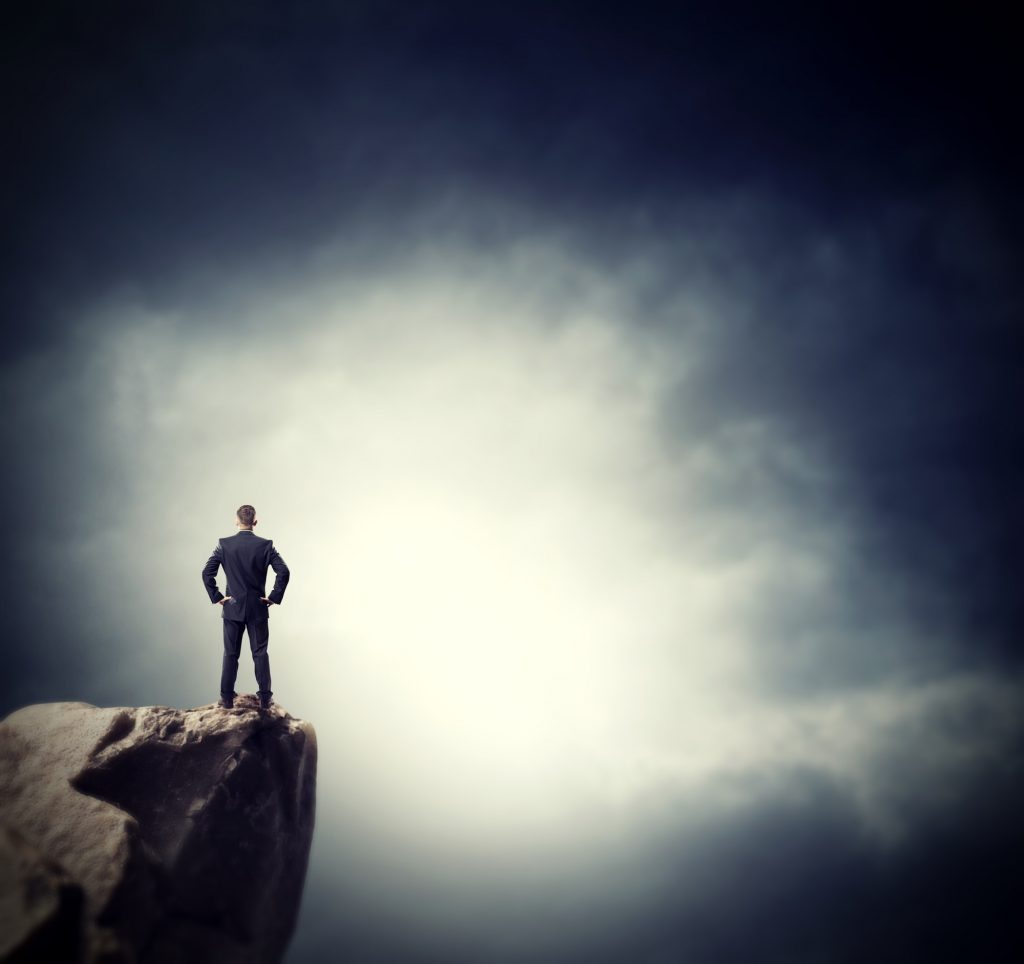 I am travelling to Rome this week to attend an ecumenical conference with Cardinal Francis Arinze. Please pray for all of us there that we may move toward that authentic unity of the Church that Christ desires and the world needs. The truth will set us free…

TRUTH is never inconsequential. It can never be optional. And therefore, it can never be subjective. When it is, the result is almost always tragic.

Hitler, Stalin, Lenin, Mao, Polpot and countless other dictators did not necessarily wake up one day and decide to eliminate millions of their population. Rather, they embraced what they believed was “the truth” regarding the best approach to the common good for their nations, if not the world. As their ideologies took form and they took power, they saw those who stood in the way as dispensable—unfortunate “collateral damage” in the building of their new paradigm. How could they have been so wrong? Or were they? And is their political opposites—capitalist countries—the answer?

BEHIND THE POLITICAL BATTLES

The battle between the “right” and the “left” today is no longer a mere disagreement on policy. It has now become a matter of life and death—a 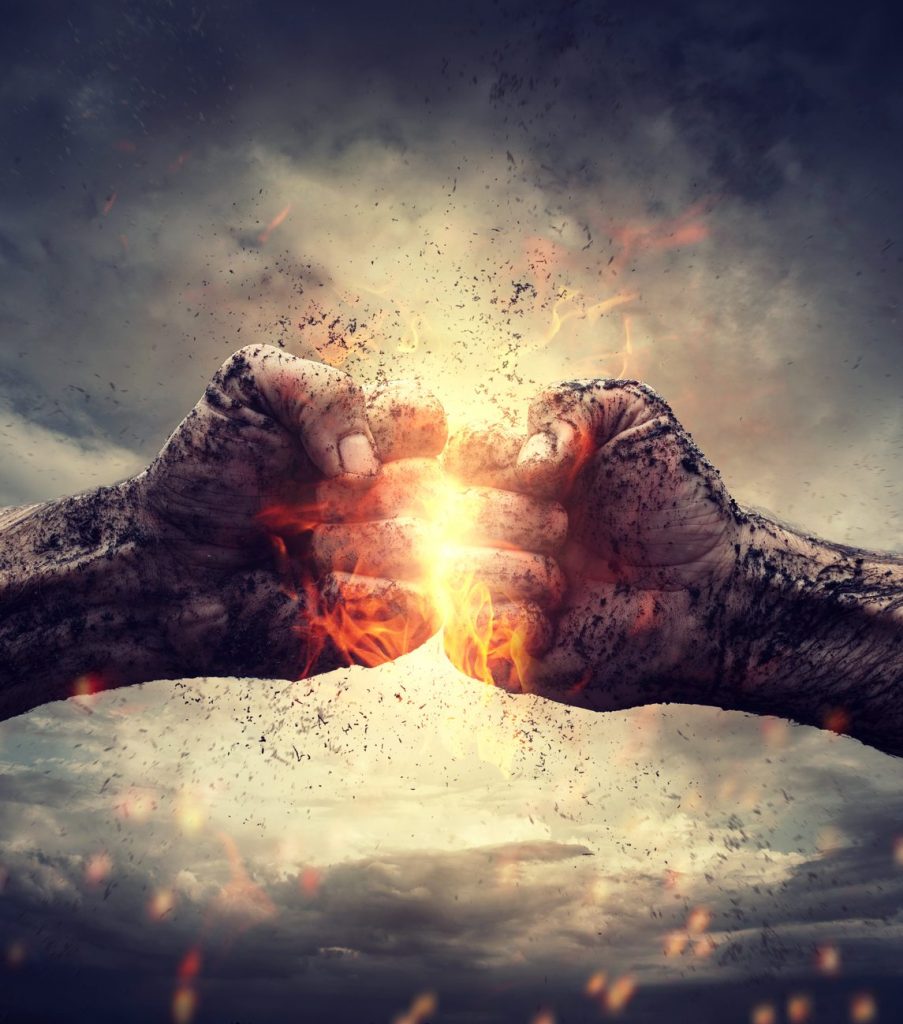 “culture of life” vs. a “culture of death.” We are just beginning to see the “tip of the iceberg” of the underlying tensions between these two visions of the future.

On an economic-political level, one can reduce the division ultimately between a capitalist versus a communistic world view. Capitalism takes the view that the markets and free enterprise should drive the economic prosperity, growth, and quality of life of a nation. The Communist viewpoint holds that the government should equally distribute the wealth, goods and services for a more just society.

The left increasingly holds that the right is wrong and vice versa. But could there be truth on both sides, and hence, the reason for such sharp division at this hour?

Communism, or rather, community-ism is a socio-political form of the early Church. Consider this:

All who believed were together and had all things in common; they would sell their property and possessions and divide them among all according to each one’s need. (Acts 2:44-45)

Isn’t this precisely what Socialist/Communist ideologues propose today through greater taxation and redistribution?  The difference is this: What the early Church accomplished was based on freedom and charity—not force and control. Christ was the heart of the community, not “dear 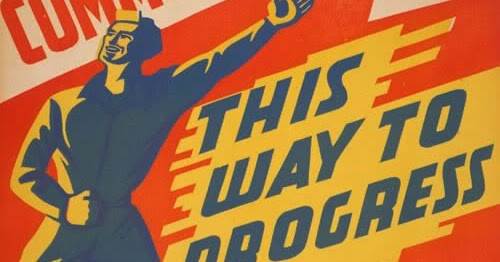 Leader,” as dictators are often called. The early Church was founded on a Kingdom of love and service; Communism is based on a kingdom of coercion and ultimately slavery to the regime. Christianity celebrates diversity; Communism imposes uniformity. The Christian community saw their material goods as a means to an end—communion with God; Communism sees the material as an end unto itself—a “utopia” whereby all men are materially equal. It is an attempt at “heaven on earth,” which is why Communism is always hand in hand with atheism.

In principle and in fact, materialism radically excludes the presence and action of God, who is spirit, in the world and above all in man. Fundamentally this is because it does not accept God’s existence, being a system that is essentially and systematically atheistic. This is the striking phenomenon of our time: atheism… —POPE ST. JOHN PAUL II, Dominum et Vivificantem, “On the Holy Spirit in the Life of the Church and the World”, n. 56; vatican.va

Even though the “idea” is the betterment of the “common good,” the truth of the human person and God Himself are neglected in the Communist’s vision. On the other hand, Christianity places the person at the center of the economy, whilst in Communism, the authoritarian leader becomes the center; everyone else is a mere cog or gear in the economic machine.

In a word, the Communist leader deifies himself.

Is Capitalism, then, the antidote to Communism? That depends. Human freedom can never be used toward a selfish end, in other words, it cannot lead to the individual deifying himself. Rather, the “free economy” must always be an expression of our solidarity with others that puts the welfare and benefit of the common good at the heart of economic growth.

If by “capitalism” is meant an economic system which recognizes the fundamental and positive role of business, the market, private property and the resulting responsibility for the means of production, as well as free human creativity in the economic sector, then the answer is certainly in the affirmative… But if by “capitalism” is meant a system in which freedom in the economic sector is not circumscribed within a strong juridical framework which places it at the service of human freedom in its totality, and which sees it as a particular aspect of that freedom, the core of which is ethical and religious, then the reply is certainly negative. —ST. JOHN PAUL II, Centesiumus Annus, n. 42; Compendium of the Social Doctrine of the Church, n. 335

So why do we see a literal revolution against Capitalism today? Because the “freedom” of individuals, corporations, and banking families has been 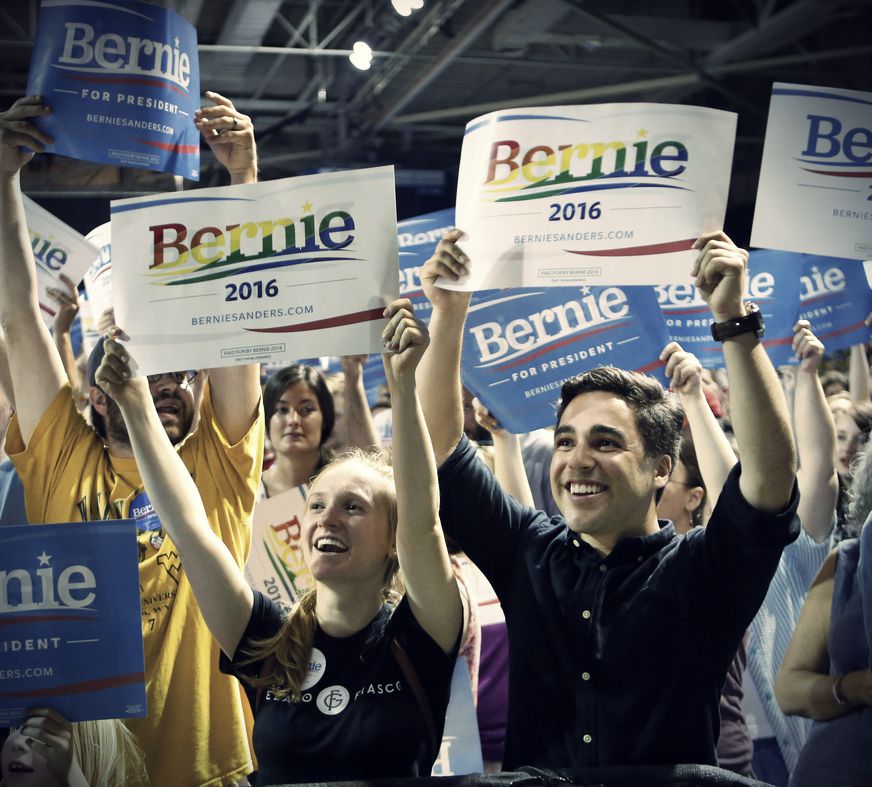 grossly misused to generate wealth either for themselves, their stockholders, or a handful of the powerful while creating a rapidly widening gap between the rich and the poor.

For the love of money is the root of all evils, and some people in their desire for it have strayed from the faith and have pierced themselves with many pains. (1 Timothy 6:10)

Today, the cost of living, education, and basic needs is so high, even in developed countries, that the future of our youth is bleak indeed. Moreover, the use of the “military complex”, the abuse and manipulation of the stock markets, the unchecked invasion of privacy by technocrats, and the unfettered pursuit of profit has produced a grotesque inequality within First World nations, kept developing nations in a cycle of poverty, and turned individuals into a commodity.

No pleasure is ever enough, and the excess of deceiving intoxication becomes a violence that tears whole regions apart – and all this in the name of a fatal misunderstanding of freedom which actually undermines man’s freedom and ultimately destroys it. —POPE BENEDICT XVI, On the occasion of Christmas Greetings, December 20th, 2010; http://www.vatican.va/

A new tyranny is thus born, invisible and often virtual, which unilaterally and relentlessly imposes its own laws and rules. Debt and the accumulation of interest also make it difficult for countries to realize the potential of their own economies and keep citizens from enjoying their real purchasing power… In this system, which tends to devour everything which stands in the way of increased profits, whatever is fragile, like the environment, is defenceless before the interests of a deified market, which become the only rule. —POPE FRANCIS, Evangelii Gaudium, n. 56

Here again, the essential truth of the dignity and intrinsic value of the human person has been lost.

…without the guidance of charity in truth, this global force could cause unprecedented damage and create new divisions within the human family… humanity runs new risks of enslavement and manipulation. —POPE BENEDICT XVI, Caritas in Veritate, n.33, 26

WHY WE ARE NOW ON THE PRECIPICE

Humanity is heading for the abyss of destruction that men have prepared by their own hands. Repent and return to Him who is your Sole and True Savior. Take care of your spiritual life. I do not want to force you, but what I say should be taken seriously. —Message of Our Lady Queen of Peace to Pedro Regis, Unaí / Minas Gerais, October 30, 2018; Pedro enjoys support from his bishop

So you see, there are indeed certain truths within Communism and Capitalism that the Church can affirm (to an extent). But when those truths are not rooted in the entire truth of the human person, they both, in their own way, become a “beast” that devours entire nations.  What is the answer?

The world is no longer willing to hear it, nor is the Church able to credibly present it. The answer lies in the social doctrine of the Catholic Church that is a 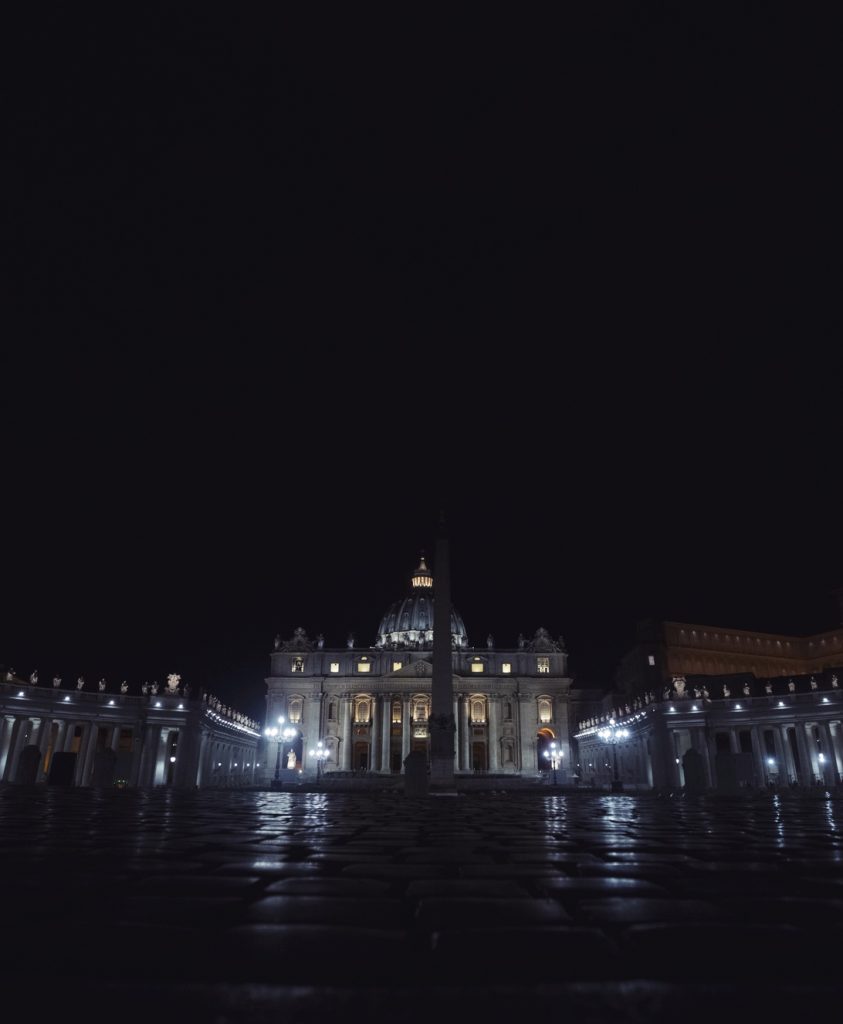 development from Sacred Tradition and the Gospel itself. The Church takes no economic/political position other than that of the truth—the truth of who we are, who God is, and our relationship to Him and one another and all that implies. From this comes the light to guide the nations to authentic human freedom, for all.

However, mankind now stands on a dangerous precipice overlooking an abyss. The Enlightenment period with all its “isms”—rationalism, scientism, evolutionism, Marxism, Communism, radical feminism, modernism, individualism, etc.—has slowly and steadily separated “Church from State”, effectively driving God from the public square. Moreover, vast portions of the Church herself, seduced by the spirit of the world, the embrace of modernism, and the revelation of sexual abuse by clergy, is no longer a credible moral force in the world.[1]cf. The Catholic Fail

It is a particularly serious sin when someone who is actually supposed to help people toward God, to whom a child or a young person is entrusted in order to find the Lord, abuses him instead and leads him away from the Lord. As a result, the faith as such becomes unbelievable, and the Church can no longer present herself credibly as the herald of the Lord. —POPE BENEDICT XVI, Light of the World, The Pope, the Church, and the Signs of the Times: A Conversation With Peter Seewald, p. 23-25

A Great Vacuum has been created that the nature of man begs to fill. Thus, a new beast is rising from the abyss, one that embraces the communal truths of Communism, the creative aspects of Capitalism, and the spiritual desires of mankind… but dismisses the intrinsic truth of the human person and the Savior, Jesus Christ. We have been warned, and I pray, prepared:

Before Christ’s second coming the Church must pass through a final trial that will shake the faith of many believers.The persecution that accompanies her pilgrimage on earth will unveil the “mystery of iniquity” in the form of a religious deception offering men an apparent solution to their problems at the price of apostasy from the truth. The supreme religious deception is that of the Antichrist, a pseudo-messianism by which man glorifies himself in place of God and of his Messiah come in the flesh. The Antichrist’s deception already begins to take shape in the world every time the claim is made to realize within history that messianic hope which can only be realized beyond history through the eschatological judgment. The Church has rejected even modified forms of this falsification of the kingdom to come under the name of millenarianism,especially the “intrinsically perverse” political form of a secular messianism. —Catechism of the Catholic Church, n. 675-676

We are now facing the final confrontation between the Church and the anti-Church, of the Gospel and the anti-Gospel, of Christ and the anti-Christ. This confrontation lies within the plans of divine providence. It is a trial which the whole Church… must take up… a test of 2,000 years of culture and Christian civilization, with all of its consequences for human dignity, individual rights, human rights and the rights of nations. —Cardinal Karol Wojtyla (JOHN PAUL II), from a 1976 speech to the American Bishops in Philadelphia

Capitalism and the Beast

Climate Change and the Great Delusion

The Fullness of Sin