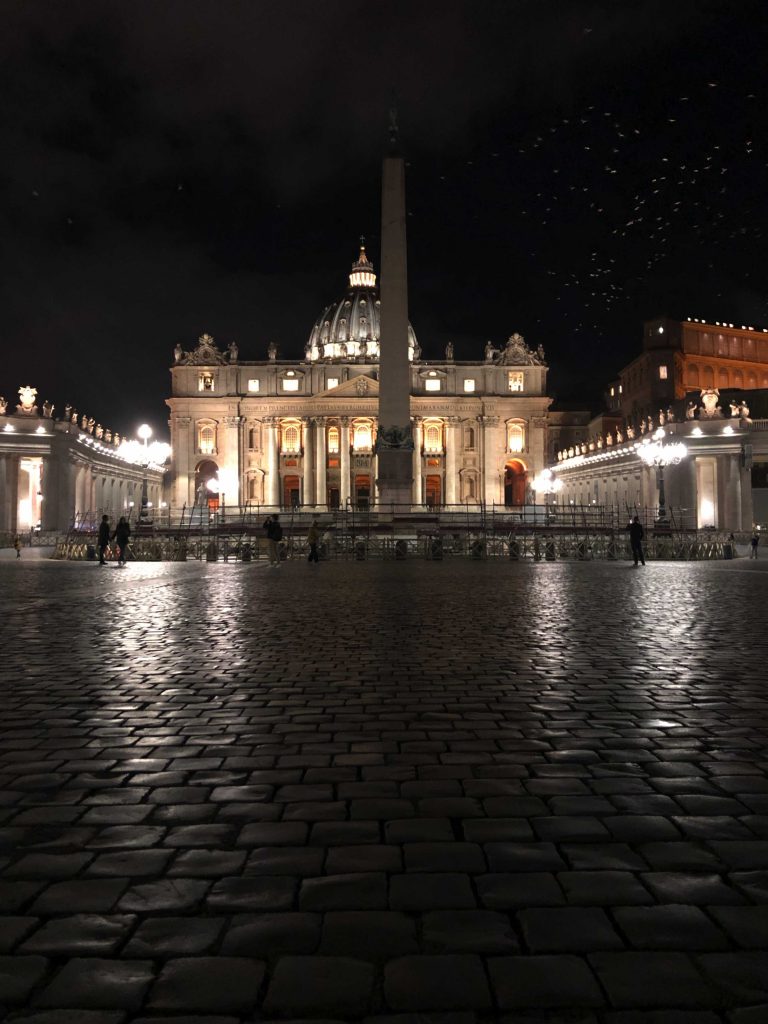 I arrived in Rome today for the ecumenical conference this weekend. With all of you, my readers, on my heart, I took a walk into the evening. Some random thoughts as I sat on the cobblestone in St. Peter’s Square…

STRANGE feeling, looking down on Italy as we descended from our landing. A land of ancient history where Roman armies marched, saints walked, and the blood of countless many more was shed. Now, highways, infrastructure, and humans bustling about like ants without the fear of invaders gives the semblance of peace. But is true peace merely the absence of war?

I checked into my hotel after a blazing fast cab ride from the airport. My seventy-year old driver drove a Mercedes with a howling rear differential and a seeming indifference that I am a father of eight children.

It was eleven in the morning when I dozed off. I woke up in the dark six hours later. A bit bummed that I blew the afternoon sleeping (and now I’m writing you past midnight here), I decided to traverse into the night. I walked over to St. Peter’s Square. There is such a peace there in the evening. The basilica was locked, with the last few visitors trickling out. Again, a hunger to be with Jesus in the Eucharist rose in my heart. (A grace. It’s all grace.) That, and the desire for Confession. Yes, the Sacrament of Reconciliation—the single most healing thing a human being can encounter: to hear, by God’s authority through His representative, that you are forgiven.

I sat down on the ancient cobblestone at the end of the piazza and pondered the curved colonnade that extended from the basilica.

The architectural design was intended to represent the open arms of a mother—Mother Church—embracing her children from all over the world. What a beautiful thought. Indeed, Rome is one of the few places on earth where you see priests and nuns walking by from all over the world and Catholics from every culture and race. Catholicus, from the Greek adjective καθολικός (katholikos), means “universal.” Multiculturalism is the failed secular attempt to duplicate what the Church has already achieved.  The State uses coercion and political correctness to create a sense of unity; the Church simply uses love.

Yes, the Church is a Mother. We cannot forget this underlying truth. She nurtures us at her breast with the grace of the Sacraments and she raises us in truth through the teachings of the Faith. She heals us when we are wounded and encourages us, through her holy men and women, to ourselves become another likeness of Christ. Yes, those statues atop the colonnade aren’t just marble and stone, but people who lived and changed the world! 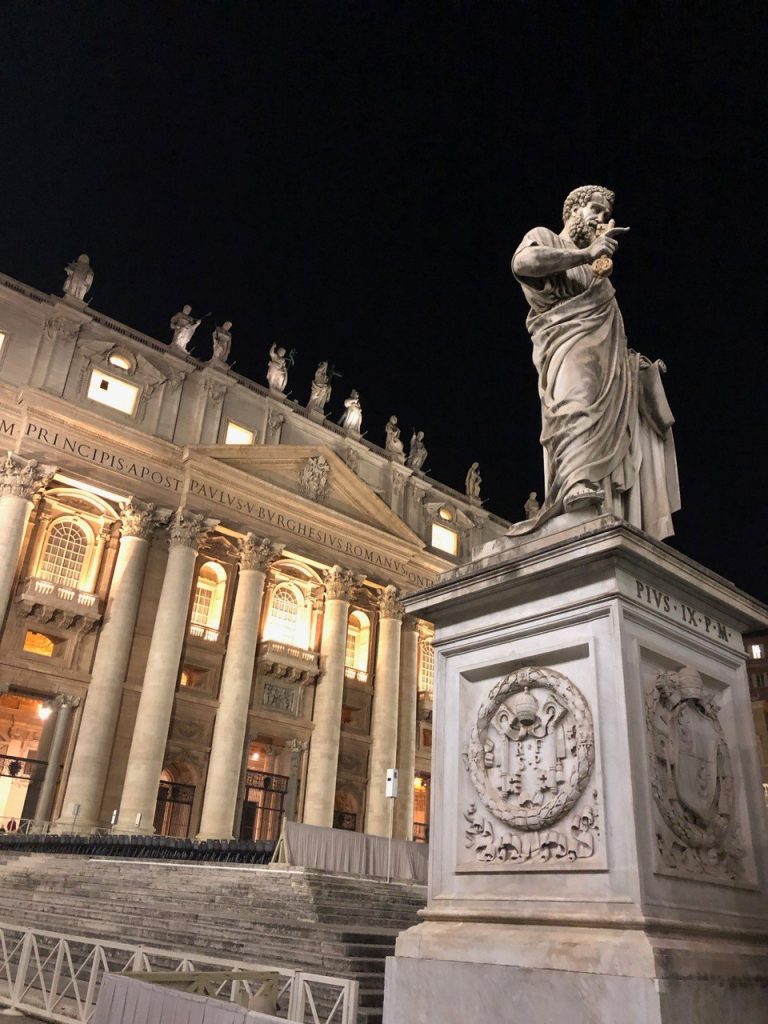 Yet, I feel a certain sadness. Yes, the sexual scandals hang over the Roman Church like billowing storm clouds. But at the same time, remember this: every single priest, bishop, cardinal, and pope alive today will not be here in a hundred years, but the Church will. I took several photos such as the ones above, but in each instance the figures in the scene were changing, yet St. Peter’s remained unchanged. So too, we may equate the Church with only the characters and actors of this present moment. But that is only a partial truth. The Church is also those who have gone before us, and certainly, those who are coming. Like a tree whose leaves come and go, but the trunk remains, so too, the trunk of the Church always remains, even if it has to be pruned from time to time.

Piazza. Yes, that word makes me think of pizza. Time to find supper.

An elderly beggar (at least he was begging) stopped me and asked for a coin for a little bit to eat. The poor are always with us. It’s a sign that humanity is still broken. Whether in Rome or Vancouver, Canada, where I’d just flown from, there are beggars on every corner. In fact, while in Vancouver, my wife and I were astonished at the number of people we encountered who were roaming the streets like zombies, young and old, aimless, destitute, despairing. As shoppers and tourists passed by, I’ll never forget the voice of a gaunt man sitting on the corner, crying out to every passerby: “I just want to eat like all of you.”

We give what we can to the poor, and then we eat ourselves. I stopped at a small Italian restaurant not far from the hotel. The food was delightful. I pondered how wonderful human beings are created. We are as distant in our being from the animals as the moon is from Venice. Animals rummage and eat what they can find in the state they find it, and don’t think twice. Humans, on the other hand, take their food and prepare, season, spice, and garnish it turning raw ingredients into a joyful experience (unless I’m cooking). Ah, how beautiful is human creativity when it is used to bring truth, beauty, and goodness into the world.

My Bangladesh waiter asked how I enjoyed the meal. “It was delicious,” I said. “It brought me a little closer to God.”

I have a lot on my heart tonight… things that my wife Lea and I are discussing, practical ways that we want to help you, our readers. So this weekend, I am listening, opening my heart to the Lord and asking Him to fill it. I have so much fear there! We all do. As I heard someone say recently, “Excuses are just well thought out lies.” So in Rome, the Eternal City and heart of Catholicism, I come as a pilgrim asking God to give me the grace I need for the next phase of my life and ministry with what time I have left on this earth.

And I will carry all of you, my dear readers, in my heart and prayers, especially when I go to the tomb of St. John Paul II. You are loved.