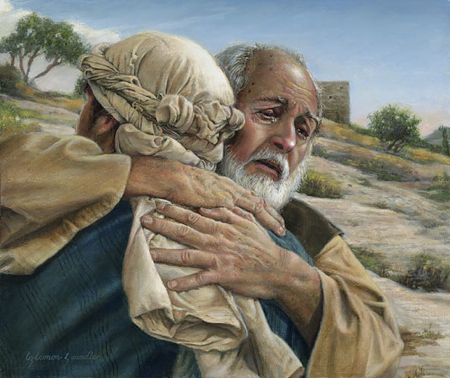 THE so-called “illumination of conscience” referred to by saints and mystics is sometimes called a “warning.” It is a warning because it will present a clear choice for this generation to either choose or reject the free gift of salvation through Jesus Christ before a necessary judgment. The choice to either return home or remain lost, perhaps forever.

Our generation is very much like the prodigal son. We have asked for our share of the Father’s estate—that is, our power over life, so as to do with it what we want.

The younger son gathered all he had and took his journey into a far country, and there he squandered his property in loose living. (Luke 15:13)

During the son’s self-willed exile, we know what the father was doing. When the boy eventually returned home, his father saw him coming from a long distance… that is, the father was always watching, waiting, and anticipating the return of his son.

Eventually the boy went bust. His lifestyle of illusory freedom produced, not life, but death… as we have produced with our “liberties” a culture of death.

But not even this reality propelled the boy home.

When he had spent everything, a great famine arose in that country, and he began to be in want. (v. 14)

I am reminded at this point of the story of Joseph in the Old Testament. Through dreams, God warned him that there would be seven years of abundance followed by seven years of famine. So too, Pope John Paul II declared the Great Jubilee in the year 2000—a celebration in anticipation of a feast of graces. I personally look back at these past seven years and see that they have been an extraordinary time of grace for myself, my family, and many others through the ministry of Jesus.

But now, I believe the world is on the threshold of “famine”—perhaps literally. But we must see this with spiritual eyes, the eyes of a loving Father in Heaven who desires that all should be saved.

The father of the prodigal son was wealthy. When famine struck, he could have sent envoys to search for his son. But he didn’t… he wouldn’t. The boy left of his own accord. Perhaps the father knew that this hardship would be the beginning of the son’s return… and our heavenly Father knows that spiritual famine produces spiritual thirst.

But pride is a wicked thing! Even the famine did not immediately turn the boy homeward. It wasn’t until he was hungry that he began to look homeward:

When he came to himself he said, `How many of my father’s hired servants have bread enough and to spare, but I perish here with hunger! I will arise and go to my father, and I will say to him, “Father, I have sinned against heaven and before you… (v. 17-18)

The world likely will not look Homeward until it recognizes its famine of the soul, perhaps through an “illumination.” This generation has become extremely blind to its sinfulness, yet, where sin abounds, grace abounds all the more. If this generation appears to be lost, let us remember that the Father is all the more longing for it to be found.

While he was yet at a distance, his father saw him and had compassion, and ran and embraced him and kissed him. (v.20)

THE DOOR OF MERCY

I believe this is the “door of Mercy” which St. Faustina spoke of—an opportunity that God will grant the world before it will be purified the hard way. A loving warning, you could say… a last opportunity for many sons and daughters to run home, and live under the safety of  His roof—in the Ark of Mercy.

Satan’s logic is always a reversed logic; if the rationality of despair adopted by Satan implies that because of our being ungodly sinners we are destroyed, the reasoning of Christ is that because we are destroyed by every sin and every ungodliness, we are saved by the blood of Christ! —Matthew the Poor, The Communion of Love, p. 103

Be confident, because a lack of confidence is the worst ingratitude. If you have offended him it does not matter! He always loves you; believe in his love and do not fear. He is always anxious to forgive. O what a Jesus! If he allows temptations, it is to make us humble. What can prevent you from loving him? He knows your misery more than anyone else and he loves you thus; our lack of confidence hurts him, our fears wound him. “What was Judas’ disgrace?” Not his treason, not his suicide, but “not having believed in the love of Jesus.” Jesus is God’s pardon… I hope that he may never find in you the coldness of mistrust and ingratitude. —Ven. Concepcion Cabrera de Armida; wife, mother, and writer in Mexico c. 1937