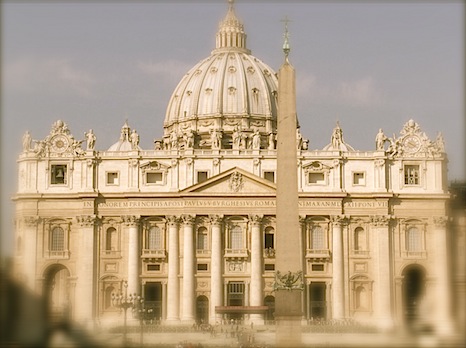 IT was Pentecost Monday of May, 1975. A prophecy was given in Rome in the presence of Pope Paul VI by a layman little known at the time. Ralph Martin, one of the founders of what is known today as the "Charismatic Renewal," spoke a word which seems to be drawing ever closer to fulfillment.

I saw Ralph when I was a child at a "Fire Rally" in Saskatchewan, Canada. I was maybe nine or ten years old. When he finished a talk, he had to immediately leave to catch a flight home. I remember feeling as though the power of the Holy Spirit had left the room with him.

His books later dotted my parents shelves with titles such as A Crisis of Truth and Is Jesus Coming Soon? I was more interested in sports and music at the time than in reading such heady titles. But I heard my parents talk about of them when I was a teenager, and came to realize that Ralph was truly a prophet in our times as his words unfolded around us.

I met Ralph in the 1990’s at another conference. 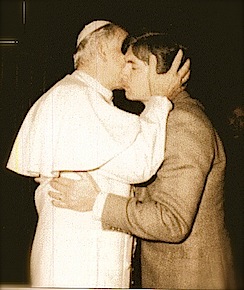 I can’t remember exactly what we spoke about, but I was moved by his attention to my questions. After all, he had met the pope, and I was just a kid from the middle of "Nowhere", Canada. But that meeting was a preface to an interview I would later conduct with Ralph when I produced my first documentary ("What in the World is Going On?") for a Canadian television network. I was examining from a secular viewpoint the strange "signs of the times" occurring in society and nature, and it included a segment where I interviewed various Christian denominational leaders. Knowing Ralph’s gift for perceiving what the Spirit is saying to the Church, I chose him to represent the Catholic viewpoint.

He said two things which I used in the piece. The first was:

There has never been such a falling away from Christianity as there has been in the past century. We are certainly a "candidate" for the Great Apostasy.

The second was that God is going to give the world an opportunity to turn back to him. (Was he speaking of the so-called "Illumination?")

Given all I’ve said above, I don’t know why I "missed" his prophecy of 1975. I do recall seeing something of it somewhere, but only vaguely. When I read it just recently, I was struck by how the events unfolding in the Church and the world appear to be confirming it more and more. (In my own written reflections, which are similar to Ralph’s, I have worked very hard to follow carefully the Tradition of the Church, using private and public prophecy to illuminate it further. I confess that I have often struggled with doubts about my mission to the point of wanting to run in terror, afraid that I could be leading souls astray. In this regard, I continue to turn everything over to God, hoping that my work may help a soul here or there to be better prepared for these days of change.) It is a tremendous encouragement when I see such men and women as Ralph Martin whom God has raised up throughout the centuries to prepare and guide us through these times.

This is as powerful a word today as I imagine it was on the day when it was uttered under the gaze of the Holy Father. I hear it now with urgency, as though it were indeed on the very threshold:

Because I love you, I want to show you what I am doing in the world today. I want to prepare you for what is to come. Days of darkness are coming on the world, days of tribulation… Buildings that are now standing will not be standing. Supports that are there for my people now will not be there. I want you to be prepared, my people, to know only me and to cleave to me and to have me in a way deeper than ever before. I will lead you into the desert… I will strip you of everything that you are depending on now, so you depend just on me. A time of darkness is coming on the world, but a time of glory is coming for my Church, a time of glory is coming for my people. I will pour out on you all the gifts of my Spirit. I will prepare you for spiritual combat; I will prepare you for a time of evangelism that the world has never seen…. And when you have nothing but me, you will have everything: land, fields, homes, and brothers and sisters and love and joy and peace more than ever before. Be ready, my people, I want to prepare you…

Yes, it is important to hear this again because I believe the time of preparation is nearly over.

A PROPHET FOR OUR TIMES

Wondering what Ralph’s latest book is? It’s called, The Fulfillment of All Desire, perhaps one of the best collections on Catholic spirituality available—a veritable textbook on the "how to" of becoming a saint, taking together the best of mystical theology which has been deposited over 2000 years. Indeed, seminaries are beginning to use the book in the formation of future priests. While Ralph has made no such claim, I believe this book is also prophetic. It explains implicitly what will be occurring exponentially within the Church during the Era of Peace when the Body of Christ will grow into "full stature"—into mystical union with Jesus Christ so as to become a "spotless and unblemished" Bride (Eph 5:25, 27) prepared to receive her Bridegroom at the end of time.

When I called Ralph sometime last year, I asked what the Spirit was saying to him regarding the times. I was surprised at first to hear him say that he wasn’t really following what was going on but was more focused on his work in teaching these things of the interior life to seminarians and students.

Yes, Ralph, you are still teaching.

Watch the series: The Prophecy at Rome where Mark unfolds this prophecy line by line, setting it in the context of Scripture and Tradition.