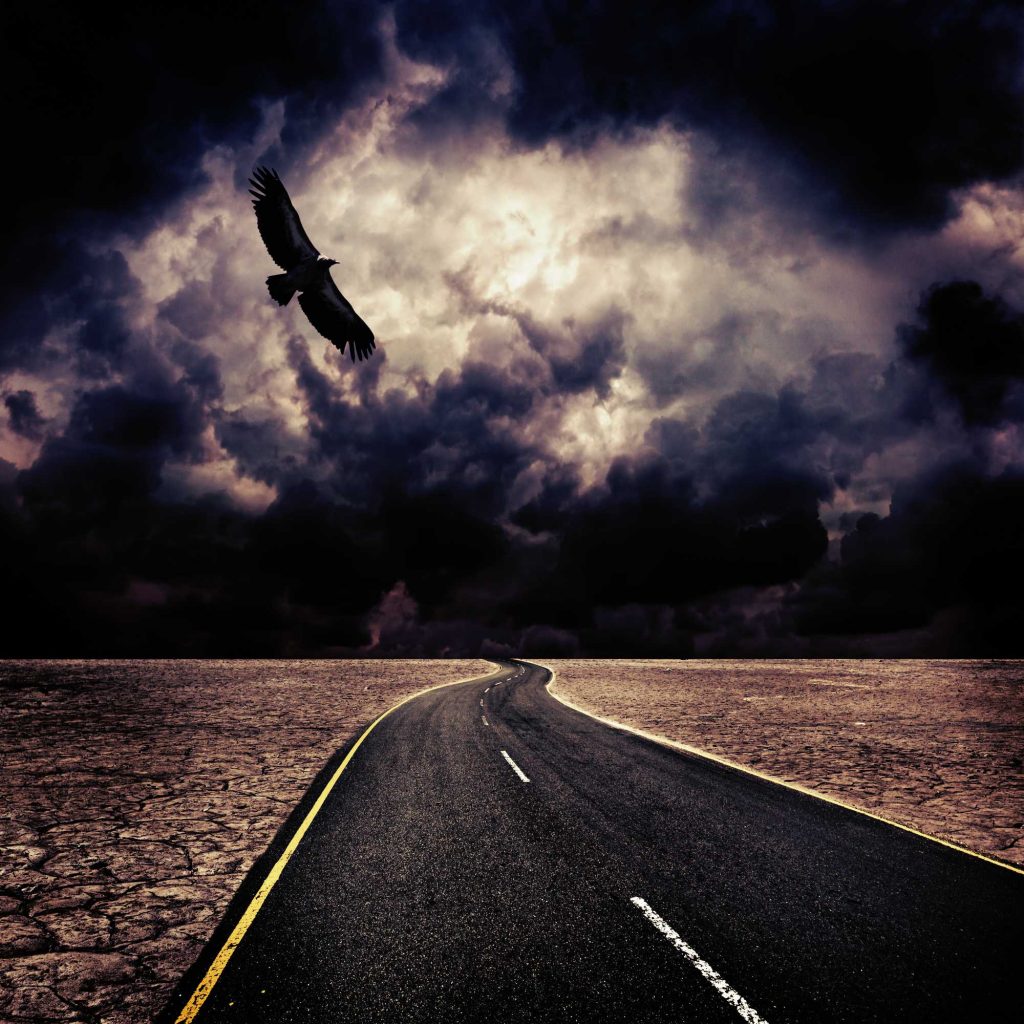 A Voice Crying Out in the Desert

ST. PAUL taught that we are “surrounded by a cloud of witnesses.” [1] As this new year begins, I wish to share with readers the “little cloud” that surrounds this apostolate through the relics of the Saints that I have received over the years—and how they speak to the mission and vision that guides this ministry…

I was praying before the Blessed Sacrament in my spiritual director’s private chapel when words, seemingly outside of myself, rose up in my heart:

I am giving you the ministry of John the Baptist.

As I pondered what this meant, I thought of the words of the Baptist himself, words in today’s Gospel:

I am the voice of one crying out in the desert, ‘Make straight the way of the Lord’… 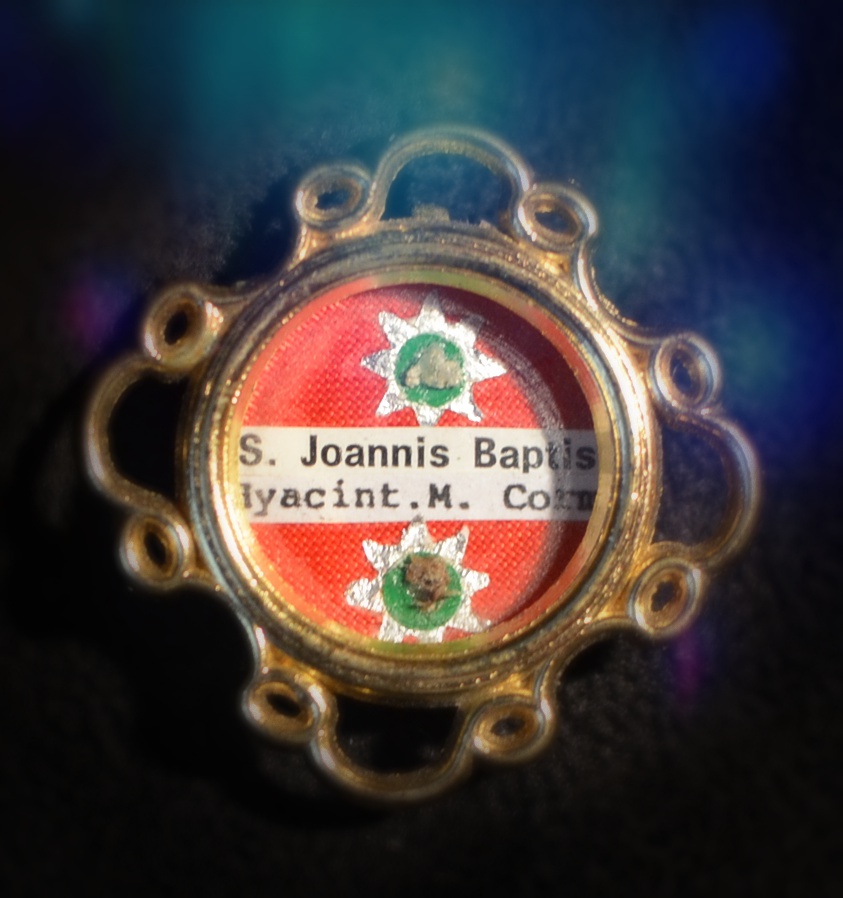 The next morning, there was a knock at the rectory door, and then the secretary called for me. An elderly man stood there, his hand extended after our greeting.

“This is for you,” he said. “It is a first class relic of John the Baptist.”

The ultimate meaning of this would unfold in the years ahead as the exhortation of St. John Paul II to us youth in 2002 would become a central theme of this apostolate:

This invitation, he later noted, would be marked by the need for both faithfulness to the Holy Father and Christ’s Church, and a certain martyrdom in stepping forward in a prophetic way to announce the coming Dawn.

Perhaps it is no coincidence, then, that there was a second relic enclosed with John the Baptist, that of the Polish martyr St. Hyacinth. He was known as the “Apostle of the North”. I live in Canada… and my grandfather is Polish.

And then that elderly man placed another first class relic into my palm that moved me no less: St. Paul the 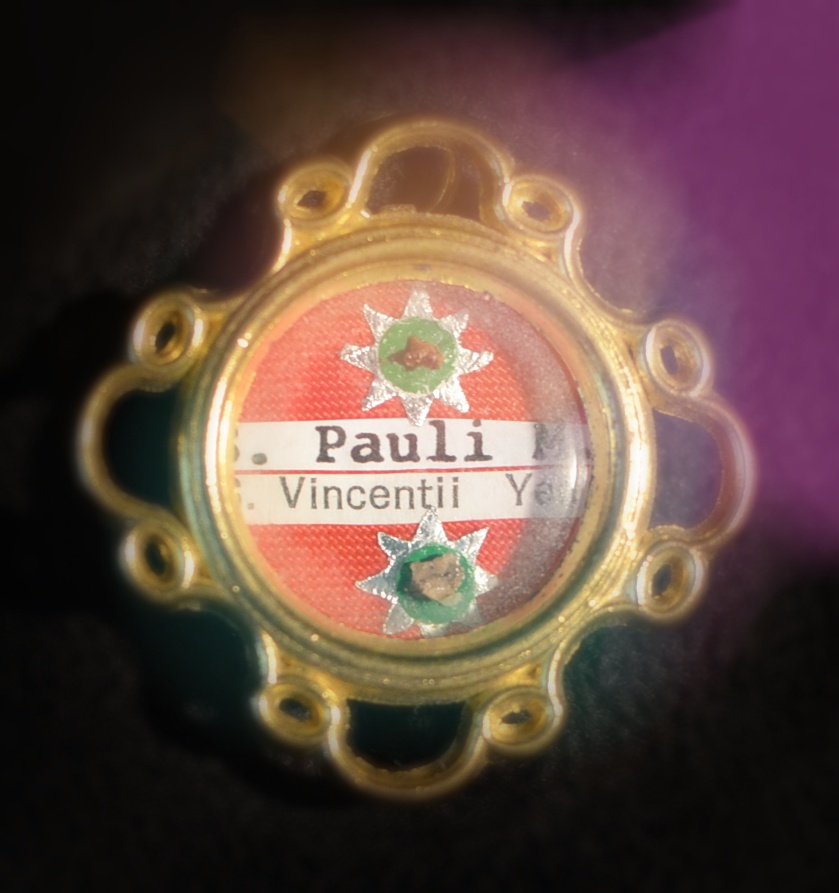 Apostle. A source of constant inspiration for me, Paul’s words inform and shape the warp and woof of my ministry, which is part of the “new evangelization” frequently invoked by his namesake, St. John Paul II.

John Paul II asked us to recognize that “there must be no lessening of the impetus to preach the Gospel” to those who are far from Christ, “because this is the first task of the Church”. Indeed, “today missionary activity still represents the greatest challenge for the Church” and “the missionary task must remain foremost”. —POPE FRANCIS, Evangelii Gaudium, n. 15; vatican.va

Beneath the fragment of St. Paul is a lesser known martyr, St. Vincent Yen, who lived in the early 19th century. Like Paul and the Baptist, he too was beheaded for the sake of the Gospel. How can one not recall the words of Our Lord:

Whoever wishes to save his life will lose it, but whoever loses his life for my sake and that of the gospel will save it. (Mark 8:35)

If the “new evangelization” is to prepare the world for “the coming of the sun who is the Risen Christ”, then Divine Mercy is the heart of the message at this hour.

Right from the beginning of my ministry in St. Peter’s See in Rome, I consider this message [of Divine Mercy] my special task. Providence has assigned it to me in the present situation of man, the Church and the world.  —POPE JOHN PAUL II, November 22, 1981 at the Shrine of Merciful Love in Collevalenza, Italy

The context was given to St. Faustina to whom Our Lady said:

…as for you, you have to speak to the world about His great mercy and prepare the world for the Second Coming of Him who will come, not as a merciful Savior, but as a just Judge. —Divine Mercy in My Soul, Diary, n. 635

A third relic I received from the man that day was of St. Faustina. A year or two later, my spiritual director would say 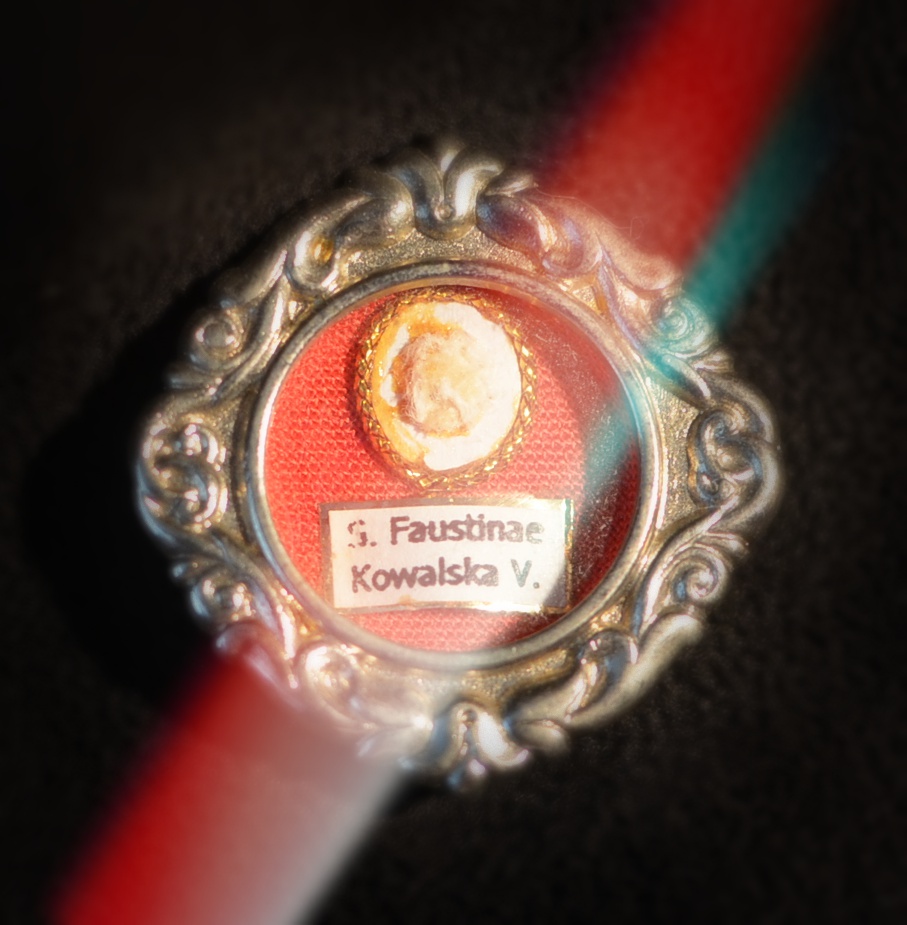 to me, “You are to preach with the Catechism in one hand, and the diary of Faustina in the other!”

This was underscored when I was invited to speak at a community in Upper Michigan. Sitting to my right was an elderly priest. Twice during the retreat that day, he asked me to visit him in his hermitage on top of a cliff. His name was Fr. George Kosicki, one of the “fathers of Divine Mercy” who helped to translate and footnote the Diary of Faustina. Someone from the community drove me to his hermitage where Fr. Kosicki handed me all the books he had written and said, “From now on, I will call you ‘son’.” He gave me his blessing, and we parted ways.

When I arrived at the bottom of the mountain, I turned to my driver and said “Wait a minute. Bring me back there.” Fr. George greeted us again on the porch.

“Are you passing the “torch” of Divine Mercy to me?”

“Yes, of course! I don’t know what it looks like, but just go with it.”

With that, he took a first class relic of St. Faustina into his hands and blessed me a second time. I descended the mountain in silence, pondering these things in my heart.

I am prolonging the time of mercy for the sake of [sinners]. But woe to them if they do not recognize this time of My visitation… Before the Day of Justice, I am sending the Day of Mercy… write, tell souls about this great mercy of Mine, because the awful day, the day of my justice, is near. —Jesus to St. Faustina, Divine Mercy in My Soul, Diary, n. 1160, 1588, 965

Being a “watchman” for Christ means standing on the Wall of Reality. It isn’t sugarcoating the precarious times we live in, nor is it obscuring the hope that lies beyond.

We cannot hide the fact that many threatening clouds are gathering on the horizon. We must not, however, lose heart, rather we must keep the flame of hope alive in our hearts. For us as Christians the true hope is Christ, the Father’s gift to humanity… Only Christ can help us build a world in which justice and love reign. —POPE BENEDICT XVI, Catholic News Agency, January 15th, 2009

While preaching in Toronto, Canada several years ago, a man who has collected and preserved hundreds of relics approached me. “I prayed about which relic to give you, and I felt it should be this one.” I opened 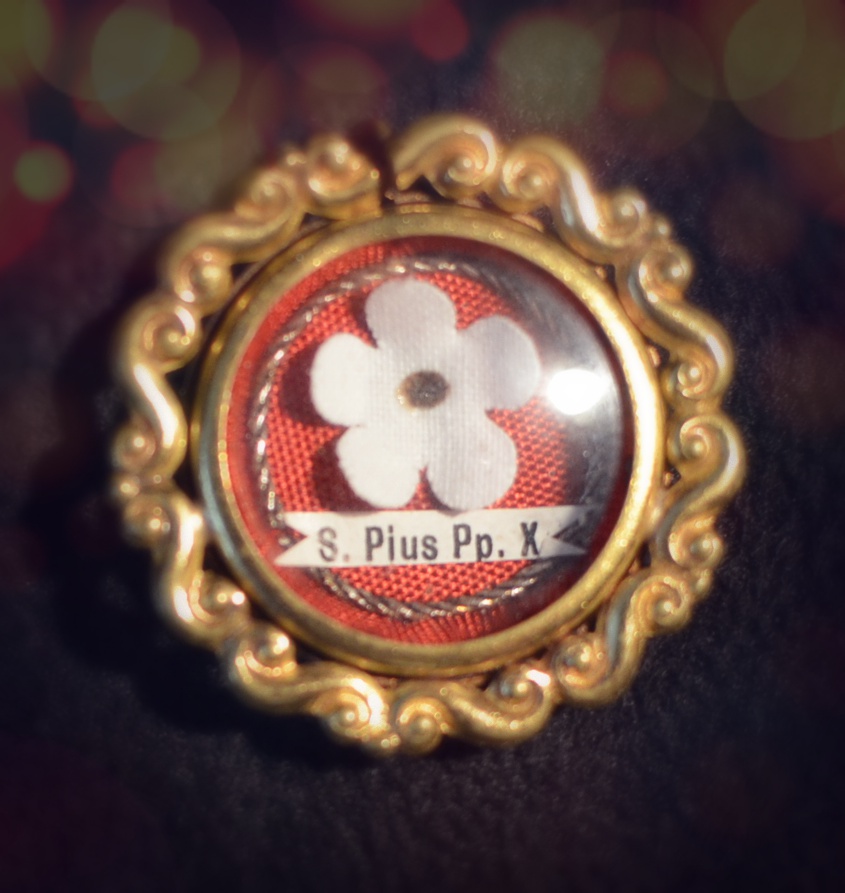 a little reliquary case, and inside was a bone fragment of Pope St. Pius X. I immediately knew the significance.

St. Pius X is one of the few popes in the last century to explicitly interpret the “signs of the times” as possibly including the appearance of Antichrist whom he felt could already be on earth (see Antichrist in Our Times). This is a subject that remains a great mystery, but one that seems to be coming ever more into focus. For when taking all the words of the popes, Our Lady, and the mystics of the past century into account, and placing them into the teachings of the Church Fathers along with the “signs of the times,” a picture emerges of a Great Storm that includes the likelihood that an Antichrist will appear before we will realize “a world in which justice and love reign” (see Is Jesus Really Coming?). In a word, we are approaching the Day of the Lord.

Whoever denies the Father and the Son, this is the antichrist. (Today’s first reading)

PREPARING THE WAY OF THE LORD

Knowledge of our times, or even knowledge of Our Lord’s mercy and love are not enough. We need to believe and receive these words, internalizing them through faith. It implies that, with great care and even haste, we must build our lives on the solid rock of God’s Word, even as the world continues to erect its illusions on the shifting sands of relativism, which will inevitably collapse. 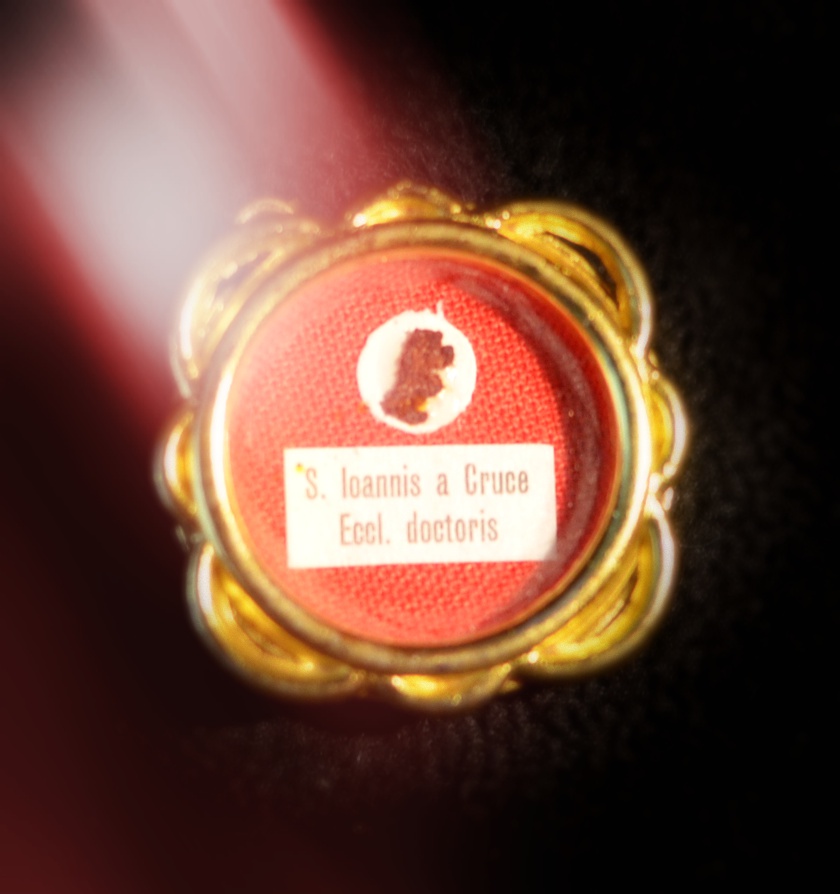 Thus, my relic of St. John of the Cross bears a great significance, since it was he who expounded most beautifully upon the importance of the interior life: a life of prayer and self-renunciation that involves the purification of the senses and the soul in preparation for union with the Creator.

And thus, I try to constantly stress to my listeners the need for a consistent and intense prayer life. In 2016, I completed a forty day retreat for my readers based in part on a simple summary of St. John of the Cross’ writings. Indeed, wherever Our Lady is appearing in the world today, she is calling her children back to her Son through a life of prayer. For it is prayer, says the Catechism, that “attends to the grace we need.” [3]

In closing, I recall the day I was sitting across a table from Monsignor John Essef in Paray-le-Monial, France. It was there that Jesus appeared to St. Margaret Mary, revealing His Sacred Heart to the world… the prologue to the message of Divine Mercy.

Msgr. Essef was the spiritual director of Mother Teresa; was himself directed by St. Pio; and is directing my own spiritual director. I was quite elated to learn this since I had felt St. Pio’s presence very strongly at the beginning of this writing ministry some twelve to thirteen years ago. Later, someone would, again, place a relic in my 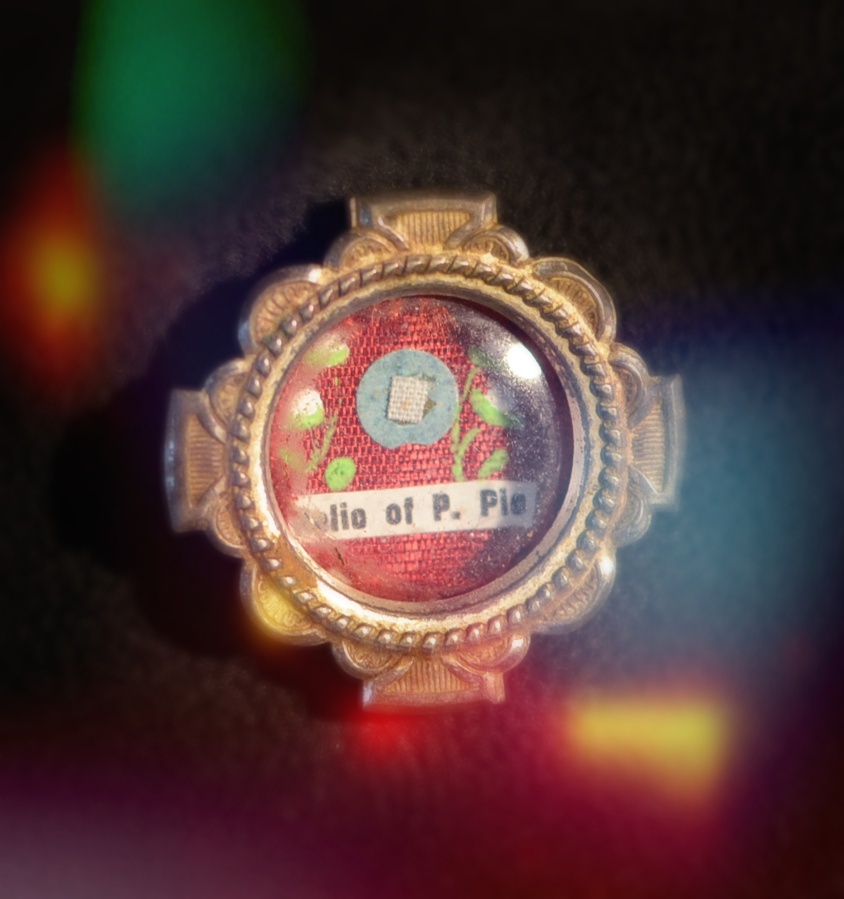 hand, this time of Pio of Pietrelcina.

So, that day in France, I shared with Msgr. Essef the closeness that I felt with St. Pio, who died the year I was born. Msgr. said nothing as he stared intently into my eyes for what seemed a very long time. Then he leaned forward, raised his finger, and with the boldness that St. Pio was renowned for, exclaimed: “He is to be your first spiritual director, and Fr. Paul your second!”

I end with this story because, in some indirect way, St. Pio is probably touching all of you who are reading this. No, not probably. He and all the saints are with us in a very close way since we are all the “body of Christ.” Yes, they are closer to us now then they were in life because, through the Mystical Body of Christ, our union is even more real, more sublime.

And so make a point of invoking the intercession of the Saints this year, most especially Our Blessed Mother. In this Final Confrontation, we have an army behind us, ready, willing, and waiting to assist us by their prayers and the special graces they have merited through the Cross of Christ, on our behalf.

What will the years ahead bring us? What will man’s future on earth be like? We are not given to know. However, it is certain that in addition to new progress there will unfortunately be no lack of painful experiences. But the light of Divine Mercy, which the Lord in a way wished to return to the world through Sr. Faustina’s charism, will illumine the way for the men and women of the third millennium. —ST. JOHN PAUL II, Homily, April 30th, 2000

This apostolate depends upon your generosity more than ever.
Thank you, and bless you!