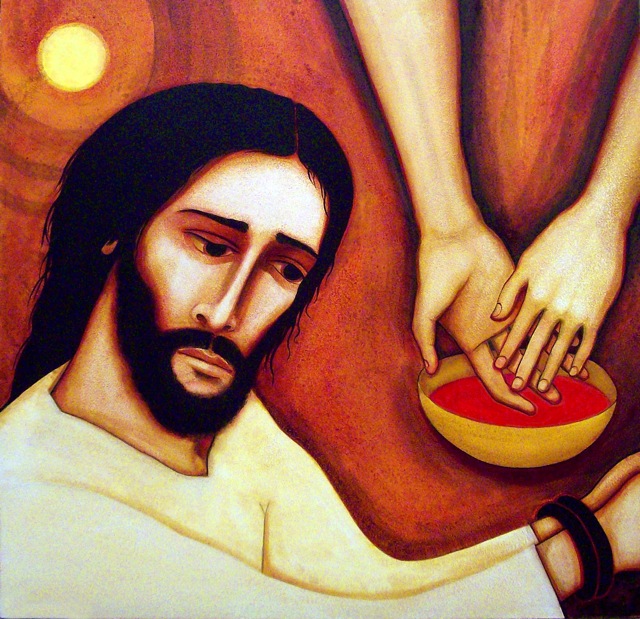 “Jesus is condemned to death by Pilate”, by Michael D. O’Brien

Indeed, the Lord GOD does nothing without revealing his plan to his servants, the prophets. (Amos 3:7)

The Lord sends the Two Witnesses into the world to call them to repentance. Through this act of mercy, we see again that God is love, slow to anger, and rich in mercy.

Do I indeed derive any pleasure from the death of the wicked? says the Lord God. Do I not rather rejoice when he turns from his evil way that he may live? (Ezek 18:23)

Lo, I will send you Elijah, the prophet, before the day of the LORD comes, the great and terrible day, to turn the hearts of the fathers to their children, and the hearts of the children to their fathers, lest I come and strike the land with doom. (Mal 3:24-25)

Elijah and Enoch will warn that terrible evil will be unleashed upon an unrepentant world: the Fifth Trumpet… for the wages of sin is death (Rom 6:23).

In this passage, we read that a “star that had fallen” was given the key to the abyss. Recall that it is to the earth that Satan is cast by Michael and his angels (Rev 12:7-9). And so this “king of the abyss” may be Satan, or perhaps the one in whom Satan manifests—Antichrist. Or is the “star” a reference to a religious apostate? St. Hildegard, for instance, held that the Antichrist will be born from the Church, and attempt to parody the great events at the end of Christ’s life, such as His death, Resurrection, and Ascension into heaven.

They had as their king the angel of the abyss, whose name in Hebrew is Abaddon and in Greek Apollyon. (Rev 9:11)

Abaddon (meaning “Destroyer”; cf. John 10:10) lets loose a plague of diabolic stinging “locusts” which have the power, not to kill, but to torment all those who do not have the seal of God on their foreheads. On a spiritual level, this sounds very much like the “deceiving power” which God permits to delude those who have refused to believe the truth (see 2 Thess 11-12). It is a deception permitted to let people follow their darkened hearts, to reap what they have sown: to follow and even worship the Antichrist who personifies this deception. However, they now follow in fear.

On a natural level, the locusts are given a description by St. John comparable to that of an army of helicopters—swat teams?

The sound of their wings was like the sound of many horse-drawn chariots racing into battle. (Rev 9:9)

The evil which the Two Witnesses warned about was a reign of fear: a global and absolute Totalitarianism headed by Antichrist, and enforced by his False Prophet.

St. John writes that, aside from the rise of Antichrist, there also comes one whom he later describes as “the false prophet.”

Then I saw another beast come up out of the earth; it had two horns like a lamb’s but spoke like a dragon. It wielded all the authority of the first beast in its sight and made the earth and its inhabitants worship the first beast, whose mortal wound had been healed. It performed great signs, even making fire come down from heaven to earth in the sight of everyone. It deceived the inhabitants of the earth with the signs it was allowed to perform… (Rev 13:11-14)

This beast has the appearance of someone religious, but who speaks “like a dragon.” It sounds like the “high priest” of the New World Order whose role is to enforce worship of the Antichrist through a single world religion and an economic system which binds to him every man, woman, and child. It is possible this False Prophet appears throughout the entire Seven Year Trial, and has a large role to play in the Apostasy, acting as it were, as the “tail” of the Dragon. In this regard, he too is a “Judas,” an antichrist. (See the Epilogue regarding the identity of the False Prophet and the possibility of another antichrist after the Era of Peace).

As far as the antichrist is concerned, we have seen that in the New Testament he always assumes the lineaments of contemporary history. He cannot be restricted to any single individual. One and the same he wears many masks in each generation. —Cardinal Ratzinger (POPE BENEDICT XVI), Dogmatic Theology, Eschatology 9, Johann Auer and Joseph Ratzinger, 1988, p. 199-200; cf (1 Jn 2:18; 4:3)

Presumably, the False Prophet also counters the miracles produced by the Two Witnesses:

It performed great signs, even making fire come down from heaven to earth in the sight of everyone. (Rev 13:13)

His satanic rituals, and those who practice it with him, helps bring about this deceiving power upon the earth like a plague of “locusts.”

Many false prophets will arise and deceive many; and because of the increase of evildoing, the love of many will grow cold. (Matt 24:1-12)

Is not the absence of love the worst torment? It is the Eclipse of the Son, the eclipse of Love. If perfect love casts out all fear—perfect fear casts out all love. Indeed, those who were stamped with the “image of the beast’s name” were forced to do so, no matter their rank: “small and great, rich and poor, free and slave” (Rev 13:16).  Perhaps this helps us understand better the Fifth Trumpet (also called “the first woe”) which alludes to a diabolical evil which ultimately manifests in the form of wicked men and women who enforce the rule of Antichrist through fear, much the way it was henchmen who carried out Hitler’s evil intentions.

THE CONDEMNATION OF THE CHURCH

Then Judas Iscariot, one of the Twelve, went off to the chief priests to hand him over to them. (Mk 14:10)

According to some of the Church Father’s, the Two Witnesses will eventually confront Antichrist who will hand them over to death.

When they have finished their testimony, the beast that comes up from the abyss will wage war against them and conquer them and kill them. (Rev 11:7)

And thus will unfold the last half of Daniel’s week, “a 42 month” reign in which Antichrist sets out to “desolate the world.” The Antichrist’s betrayal will lead to Christianity itself brought before the courts of the world (Lk 21:12), symbolized by Pontius Pilate. But first, the remnant will be tried in the “court of opinion” among the members of the Church who have apostasized. The Faith itself will be on trial, and among the faithful will be countless people falsely judged and condemned: The chief priests, elders, and scribes—Christ’s fellow members of the Temple—mocked and spat upon Jesus, raising all kinds of false accusations against Him. Then they asked Him:

So too, the Body of Christ will be condemned for not acquiescing to the New World Order and its “religious” tenets which are opposed to God’s moral order. The Russian prophet, Vladimir Solovev, whose writings Pope John Paul II praised, said that “Antichrist is a religious imposter” who will impose a vague “spiritualism.” For rejecting it, the true followers of Jesus will be mocked and spat upon and excluded as was Christ their Head. The voices of accusation will mockingly ask them if they belong to the Messiah, to His moral teachings on abortion and marriage and whatever else. The Christian’s answer is what will draw out the wrath and condemnation of those who have rejected the Faith:

Then Jesus was blindfolded. They struck Him and yelled:

Indeed, the Two Witnesses will blow the final trumpet. The eclipse of truth and love prepares the way for “the second woe,” the Sixth Trumpet.

Jesus said to those disciples whom He sent out two by two:

Whoever will not receive you or listen to your words—go outside that house or town and shake the dust from your feet. (Matt 10:14) 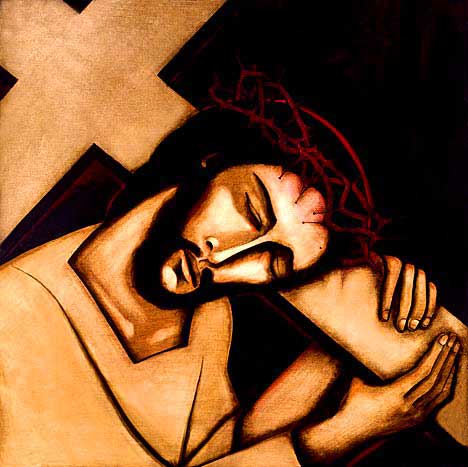 The Two Witnesses, seeing that the world is following after the False Prophet and Beast, resulting in unparalleled lawlessness, shake the dust from their feet and sound their last trumpet before they are martyred. It is the prophetic warning that war is the fruit of a culture of death and fear and hatred which has gripped the earth.

The Sixth Trumpet is blown, releasing the four angels who are bound at the banks of the river Euphrates.

Perhaps these troops are released to carry out Antichrist’s brutal plans to “reduce” the population of the earth and thus “save the environment.” Whatever their purpose, it seems to be in part through weapons of mass destruction: “fire, smoke, and sulfur.”  Most certainly, they will be commissioned to seek out and destroy the remnant of Christ’s followers, beginning with the Two Witnesses:

When they have finished their testimony, the beast that comes up from the abyss will wage war against them and conquer them and kill them. (Rev 11:7)

Then the Seventh Trumpet is blown signaling that God’s mysterious plan has been fully implemented (11:15). His plan of mercy and justice is reaching its peak, for even the chastisments thus far have not procured repentance in the nations:

The rest of the human race, who were not killed by these plagues, did not repent of the works of their hands… Nor did they repent of their murders, their magic potions, their unchastity, or their robberies. (9:20-21)

God’s justice is now to be poured out in full through the Seven Bowls which are mirror images of the Seven Trumpets. In fact, the Seven Trumpets contain within them the Seven Seals which in turn are mirror images of the ‘labor pains’ Jesus spoke of. Thus we see the “spiral” of Scripture unfolding on deeper and deeper levels through the Seals, Trumpets, and Bowls until the spiral reaches its pinnacle: the Era of Peace followed by the final upheaval and return of Jesus in glory.  It is interesting that following this trumpet, we read next of the appearance of the “ark of His covenant” in the temple, the “woman clothed with the sun… in pain as she labored to give birth.” We have cycled to this point again, perhaps as a divine signal that the birthing of the Jews into the Church is at hand.

The Seven Bowls bring God’s plan to its final stages…