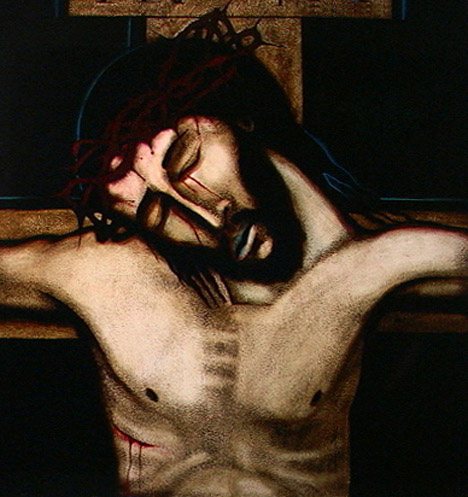 AS we continue to follow the Passion of the Body in relation to the Book of Revelation, it is good to recall the words we read at that book’s beginning:

Blessed is the one who reads aloud and blessed are those who listen to this prophetic message and heed what is written in it, for the appointed time is near. (Rev 1:3)

We read, then, not in a spirit of fear or terror, but in a spirit of hope and anticipation of the blessing which comes to those who “heed” Revelation’s central message: faith in Jesus Christ saves us from everlasting death and grants us a share in the inheritance of the Kingdom of Heaven.

THE most significant event of the Seven Year Trial is not the rise of Antichrist, but the abolition of the Holy Mass, which will have cosmic consequences:

All the wrath and indignation of God yield before this offering. —St. Albert the Great, Jesus, Our Eucharistic Love, by Fr. Stefano M. Manelli, FI; p. 15

Without the Holy Mass, what would become of us? All here below would perish, because that alone can hold back God’s arm. —St. Teresa of Avila, Ibid.

Without the Mass, the earth would have already been destroyed by the sins of men many ages ago. —St. Alphonsus de’ Liguori; Ibid.

And recall again the prophetic words of St. Pio:

It would be easier for the world to survive without the sun than to do so without the Holy Mass. —Ibid.

The absence of Christ’s Eucharistic presence on earth (except where Masses are said in secret) unleashes terrible evil, not only within hearts, but within the cosmos itself. With the “crucifixion” of the Church, the Mass will nearly cease throughout the world except in hidden places. The perpetual sacrifice will be abolished publicly worldwide, and all underground priests hunted. Y et, as Jesus promised at the beginning of the book of Revelation:

In this regard, there is a deeper message in the two miracles of the multiplication of loaves which occurred in the wilderness where there was no food. On the first occasion, the Apostles collected 12 wicker baskets full of left-over fragments of bread. On the second occasion, they collected 7 baskets. After asking the Apostles to recollect these miracles, Jesus asks them:

The twelve baskets represent the Church, the twelves apostles (and twelves tribes of Israel) while seven represents perfection. It is as if to say, “I will look after my people, I will feed them in the desert.” His providence and protection are not lacking; He knows how to care for His Bride.

The hour of the Church’s Triumph and the chaining of Satan will coincide. God’s imminent victory over evil comes about in part through the Seven Bowls—the wrath of God.

Fire will fall from the sky and will wipe out a great part of humanity, the good as well as the bad, sparing neither priests nor faithful. The survivors will find themselves so desolate that they will envy the dead. The only arms which will remain for you will be the Rosary and the Sign left by My Son. Each day recite the prayers of the Rosary. —Approved message of the Blessed Virgin Mary to Sr. Agnes Sasagawa , Akita, Japan; EWTN online library.

God will send two punishments: one will be in the form of wars, revolutions, and other evils; it shall originate on earth. The other will be sent from Heaven. —Catholic Prophecy, Yves Dupont, Tan Books (1970), p. 44-45

With the rise of Antichrist, the door of the Ark, which has remained open, is about to be shut, just as Noah’s ark was not sealed until after “seven days.” As Jesus said to St. Faustina:

The Seven Bowls (Rev 16:1-20) appear to be the literal fulfillment of the events spiritually paralleled in the first four trumpets, the schism. In all probability, they describe a comet or other celestial object passing between the earth and the sun. The Bowls are the just responses to the rebellion which has consumed the world, and to the blood of the holy ones 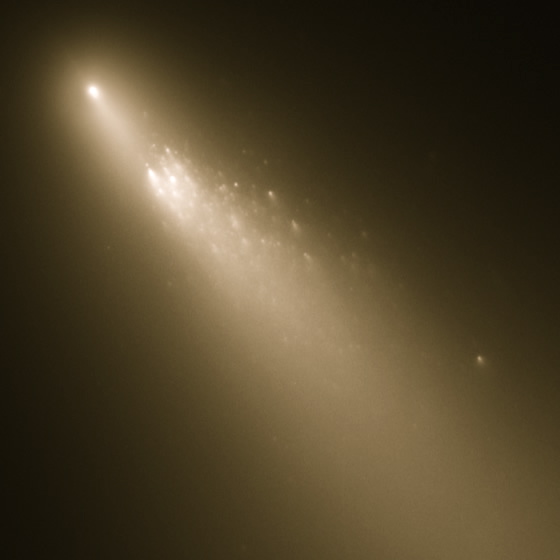 which is being shed. They comprise the third and final woe which will purify the earth of all wickedness.

There will be signs in the sun, the moon, and the stars, and on earth nations will be in dismay, perplexed by the roaring of the sea and the waves. People will die of fright in anticipation of what is coming upon the world, for the powers of the heavens will be shaken.(Luke 21:25-28)

We will see this object approaching the earth. It may break into many parts (as has happened with recent comets entering our solar system; see above photo), and strike the earth in various pieces—like the elements within the first four trumpets. As the Dragon’s tail swept over the Church, the tail of debris of this object will sweep over the earth, sending a “burning mountain” into the ocean, a rain of “hail and fire” upon the land, and “wormwood” or poisonous gases into the rivers and springs.

By its tremendous pressure, the comet will force much out of the ocean and flood many countries, causing much want and many plagues. All coastal cities will live in fear, and many of them will be destroyed by tidal waves, and most living creatures will be killed, even those who escape from horrible diseases. For in none of those cities does a person live according to the laws of God. —St. Hildegard (12th century), Catholic Prophecy, p. 16

The first angel went and poured out his bowl on the earth. Festering and ugly sores broke out on those who had the mark of the beast or worshiped its image. (Rev 16:2)

Theologian Fr. Joseph Iannuzzi speculates that those who received the mark of the beast will be stricken with festering, ugl y sores caused by ‘coarse-comet ash’; those protected by God will not. Those who have taken “the mark” suffer this torment.

A powerful wind will rise in the North carrying heavy fog and the densest dust by divine command, and it will fill their throats and eyes so they will cease their savagery and be stricken with great fear. Before the comet comes, many nations, the good excepted, will be scourged by want and famine… —St. Hildegard (12th century), Divinum Operorum, St. Hildegardis, heading 24

It is known that comets contain a red dust that some scientists believe to be tholins, which are large organic carbon molecules. The Second and Third bowls turn the sea “to blood,” killing marine life and destroying rivers and springs due to the red dust of the comet. The Fourth Bowl appears to describe the effects of the comet upon the atmosphere, causing the sun to appear to burn brighter, scorching the earth. Indeed, was there not a grave warning in the “miracle of the sun” witnessed by tens of thousands at Fatima, when the sun pulsated and appeared to fall toward the earth? The Fifth Bowl seems to follow from the fourth: the earth burning from the effects of the scorching heat, the sky filling with smoke, plunging the Beast’s kingdom into utter darkness.

Likely a consequence of the Fifth, the Sixth Bowl dries up the river Euphrates and releases demonic spirits so as to lure the kings of the East into assembling at Armageddon.

Armageddon… means “Mountain of Megiddo.” Since Megiddo was the scene of many decisive battles in antiquity, the town became the symbol of the final disastrous rout of the forces of evil. —NAB footnotes, cf. Rev 16:16