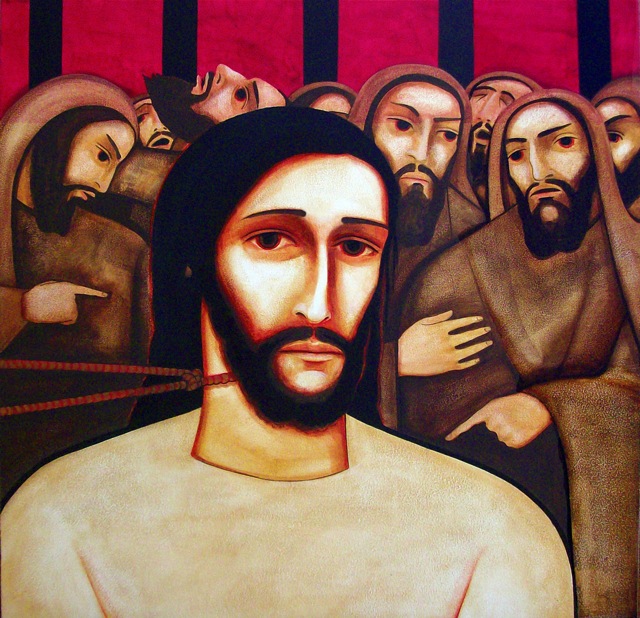 THERE is coming a time when the Church will imitate her Lord in the face of her accusers, when the day of debating and defending will give way to The Silent Answer.

THE ECLIPSE OF TRUTH

I wrote recently about the coming Revolution. Many simply cannot believe this is possible. But what we think and what we see are two different things: the signs of the times are all around us. Whether it is a Miss USA candidate standing up for traditional marriage, or the Holy Father exposing the lie about condoms, the response is increasingly unrestrained. One of the greatest signs, at least in the case of the Holy Father, is that he is increasingly being flogged by fellow bishops and priests. I think of Our Lady of Akita whose message, ironically, Pope Benedict approved himself when he was Prefect of the Congregation for the Doctrine of the Faith:

The work of the devil will infiltrate even into the Church in such a way that one will see cardinals opposing cardinals, bishops against bishops. The priests who venerate me will be scorned and opposed by their confreres… — Our Lady of Akita, Third and last message, October 13th, 1973;www.ewtn.com/library/mary/akita.htm

As far back as the 1990’s, I produced a two-part mini-documentary for a newscast exposing the fact that condoms do little to prevent the sexually transmitted diseases of Chlamydia and Human Papilloma Virus (which is linked to cervical cancer) since these are transmitted through touch. Furthermore, there is substantial evidence that condoms actually lead to an increase in sexual activity, exacerbating the AIDS epidemic:

There is a consistent association shown by our best studies, including the U.S.-funded ‘Demographic Health Surveys,’ between greater availability and use of condoms and higher (not lower) HIV-infection rates. —Edward C. Green, Director of the AIDS Prevention Research Project at the Harvard Center for Population and Development Studies; LifeSiteNews.com, March 19th, 2009

But the days are here and coming where the evidence matters little; where truth is subjective; where history is rewritten; where the wisdom of the ages is mocked; where reason is replaced by emotion; freedom displaced by tyranny.

In one of my very first writings, I wrote: 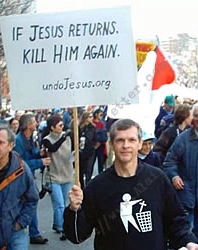 The intolerance of “tolerance!” It is curious how those who accuse Christians of hatred and intolerance are often the most venomous in tone and intent. It is the most obvious—and easily over-looked hypocrisy of our times.

Jesus prophesied these days at the very beginning of His ministry:

And this is the verdict, that the light came into the world, but people preferred darkness to light, because their works were evil. For everyone who does wicked things hates the light and does not come toward the light, so that his works might not be exposed. (John 3:19-20)

THE TIME OF TIMES

Once again, brothers and sisters, we should not be afraid to call evil by its name, recognizing that we are living in an extraordinary battle, what Pope John Paul II called “the final confrontation.” The immensity of this battle was underscored again by Bishop Robert Finn of the diocese of Kansas City-St. Joseph.

As I speak a word of encouragement today I also want to tell you soberly, dear friends, “We are at war!” …today’s issues bring “an intensity and urgency to our efforts that may rival any time in the past.” —April 21st, 2009, LifeSiteNews.com

Bishop Finn acknowledged that the war is often between members of the Church itself.

The “battle between believers,” who claim a certain “common ground” with us, while at the same time, they attack the most fundamental tenets of the Church’s teachings, or disavow the natural law—this opposition is one of the most discouraging, confusing, and dangerous. —Ibid.

Or disavow the central message of the Gospel itself? The sitting Chairman of the German Episcopal Conference, Archbishop of Freiburg, Robert Zollitsch, recently said,

Christ “did not die for the sins of the people as if God had provided a sacrificial offering, like a scapegoat.” Instead, Jesus had offered only “solidarity” with the poor and suffering. Zollitsch said “that is this great perspective, this tremendous solidarity.” The interviewer asked, “You would now no longer describe it in such a way that God gave his own Son, because we humans were so sinful? You would no longer describe it like this?“, Monsignor Zollitsch responded, “No.” —LifeSiteNews.com, April 21st, 2009

Discouraging, confusing, dangerous. Nonetheless, we need to speak the truth while it is time for speaking truth, even if, says Bishop Finn, “it means we might get scolded at times by those who want us to speak less.”

Satan and the enemies of life would love for you and I to crawl into a hole and remain silent. This is not The Silent Answer I am speaking of. For whether we speak or whether we are silent, our lives must shout the Gospel of Jesus Christ through either our words or our deeds; through the proclamation of truth or the witness of love… a love that triumphs. Christianity is not a religion of philosophical babble but the Gospel of transformation where those who believe in Jesus, who turn from a life of sin, and follow in the footsteps of the Master, are “transformed from glory to glory” (2 Cor 3:18) through the power of the Holy Spirit. This transformation should be visible to the world in all that we are and do. Without it, our witness is sterile, our words powerless.

If Christ’s words remain in us we can spread the flame of love that He kindled on earth; we can bear aloft the torch of faith and hope with which we advance towards Him. —POPE BENEDICT XVI, Homily, St. Peter’s Basilica, April 2nd, 2009; L’Osservatore Romano, April 8th, 2009

Perhaps Pope Benedict signaled the days of Silent witness approaching when, in his trip to Africa, he echoed the simplicity with which the Apostles in their days of persecution approached the world:

I am leaving for Africa aware that I have nothing to propose or give to those whom I shall meet except Christ and the Good News of his Cross, a mystery of supreme love, of divine love that overcomes all human resistance and even makes forgiveness and love for one’s enemies possible. —Angelus, March 15th, 2009, L’Osservatore Romano, March 18th, 2009

As the Church enters her own Passion, the day will come when The Silent Answer will be all there is left to give… when the Word of Love will speak for and through us.

…we will not be swayed from our path, though the world seduce us with its smiles or try to terrify us with naked threats of its trials and tribulations. —St. Peter Damian, Liturgy of the Hours, Vol. II, 1778