THE NOW WORD ON MASS READINGS
for Thursday, January 29th, 2015 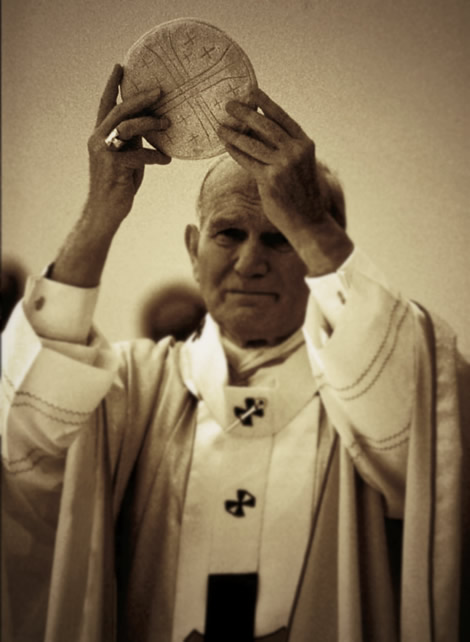 THE Old Testament is more than a book telling the story of salvation history, but a shadow of things to come. The temple of Solomon was but a type of the temple of Christ’s body, the means by which we could enter into the “Holy of holies”—the very presence of God. St. Paul’s explanation of the new Temple in today’s first reading is explosive:

…through the Blood of Jesus we have confidence of entrance into the sanctuary by the new and living way he opened for us through the veil, that is, his flesh…

As Jesus expired on the Cross, Luke records that “the veil of the temple was torn down the middle.” [1]cf. Luke 23:45 The veil is what separated the People of God from the inner sanctuary of God’s presence in the Holy of holies. Thus, Jesus’ body and blood becomes the means by which we enter into the presence of God, into full communion with the Father—a communion which was ruptured in the Garden of Eden.

What is explosive in this revelation is that Christ meant it literally.

I am the living bread which came down from heaven; if any one eats of this bread, he will live for ever; and the bread which I shall give for the life of the world is my flesh… (John 6:51)

And lest His listeners think that Jesus did not mean this literally, He goes on to say:

For my flesh is true food, and my blood is true drink. Whoever eats my flesh and drinks my blood remains in me and I in him. (John 6:55-56)

The verb “eats” used here is the Greek verb trogon which means to “munch” or “gnaw”. The meaning was so clear to Christ’s listeners that St. John records in 6:66 of his gospel that “as a result of this, many of his disciples returned to their former way of life and no longer accompanied him.” Yes, 666 still symbolizes apostasy today, a rejection of Christ crucified, which is re-presented at each and every Sacrifice of the Mass.

Now, so that His Apostles would know precisely the means by which souls could enter into “the sanctuary” after His death, Jesus inaugurated the Last Supper—the first “Mass” where two things happened. First, He declared that the bread and wine He was holding in His hands was both His flesh and blood:

…the Lord Jesus, on the night he was handed over, took bread, and, after he had given thanks, broke it and said, “This is my body that is for you. Do this in remembrance of me.” In the same way also the cup, after supper, saying, “This cup is the new covenant in my blood. Do this, as often as you drink it, in remembrance of me… (1 Cor 11:23-25)

Second, He commanded the Apostles to eat it:

“Take, eat; this is my body.” And he took a cup, and when he had given thanks he gave it to them, saying, “Drink of it, all of you, for this is my blood of the covenant, which is poured out for many for the forgiveness of sins.” (Matt 26:26-28)

What is remarkable here is that Jesus had not died yet, and yet He declared that what the Apostle’s were consuming “is” being poured out for many. Here, we see that Christ in His divine nature was already making present the Sacrifice of His life, which in eternity extends to the beginning of time until the end of human history. If Jesus was able to make His Sacrifice present at the Last Supper, then most certainly, after His death and resurrection, He is able to make that Sacrifice present again through those to whom He commmanded to “do this in remembrance of me.” That is, through the sacramental priesthood. Indeed, we do not re-crucify Christ at the Mass, but make present what was accomplished once and for all at Calvary. It is as though we are literally present again at the Last Supper and Calvary, or rather that the latter is made present to us. The Mass, then, is the supernatural event on earth in which the inner sanctuary of the Father’s heart is opened and we are able to enter through reception of the Body and Blood of Jesus.

Oh, how incredible is this truth, unchanged for 2000 years! Indeed, you will find nowhere in the first thousand years of Christianity anyone disputing the Real Presence of Christ in the consecrated bread and wine. Disbelief in the Eucharist, then, is a clear sign of the spirit of antichrist present in the world.

Let this truth stir your heart again, Christian. Let the Mass become for you the Summit of every day, if possible (what could be more important?). As Paul says in today’s first reading, “We should not stay away from our assembly…” And, he adds:

…let us approach with a sincere heart and in absolute trust, with our hearts sprinkled clean from an evil conscience and our bodies washed in pure water.

A person should examine himself, and so eat the bread and drink the cup. For anyone who eats and drinks without discerning the body, eats and drinks judgment on himself. (1 Cor 11:28-29)

As David asks in today’s Psalm, “Who can ascend the mountain of the Lord? Or who may stand in his holy place?”

He whose hands are sinless, whose heart is clean, who desires not what is vain. He shall receive a blessing from the Lord, a reward from God his savior…

Sounds like this is a fairly big deal. Indeed, the “blessing” Jesus wants to bestow upon us through the Eucharist is eternal life. [2]cf. John 6:54 Jesus says in today’s Gospel, “To the one who has, more will be given…” So let us hasten in humility to the next Mass and stand with Our Lady once again at the foot of Calvary. How incredible it is that we can enter into the Father’s presence through the Body and Blood of Jesus, and know with certainty as the taste of bread and wine lingers upon our tongue, that we have the assurance that, in Christ, we will “live forever”…