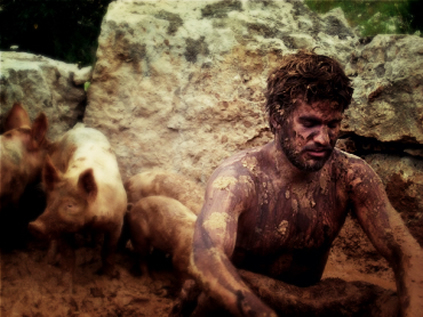 The Jews understood what it meant for the prodigal son in today’s Gospel to have been amongst the pigs. It would have made him ritually unclean. In fact, the progidal son would have been considered despicable, not only for his sins, but most especially for handling the Gentile’s pigs. And yet, Jesus tells us that while the prodigal son was still a long way off…

…his father caught sight of him, and was filled with compassion. He ran to his son, embraced him and kissed him. (Today’s Gospel)

This would have been astonishing to Jesus’ Jewish listeners, for the father, in touching his son, made himself ritually unclean.

There are three things that need to be pointed out in this story that parallels the love of God the Father for us. The first is that the Father runs to you at the first sign of your return to Him, even if you are still a long way off from being holy.

Not according to our sins does he deal with us… so surpassing is his kindness toward those who fear him. (Today’s Psalm)

He “touches us” through the Incarnate Son’s flesh.

The second thing is that the father embraced the prodigal son before the boy made his confession, before the boy was able to say, “I am not worthy…” You see, we often think that we have to be holy and perfect before God will love us—that once we go to Confession, then God will want me. But the Father throws His arms around you even now, dear sinner, for one reason alone: you are His child.

…nor height, nor depth, nor any other creature will be able to separate us from the love of God in Christ Jesus our Lord. (Rom 8:39)

The third thing is that the father does let his son make his little confession in which the boy feels utterly unworthy of his sonship. But the father cries out:

Quickly, bring the finest robe and put it on him; put a ring on his finger and sandals on his feet.

You see, we need to go to Confession. It is there that the Father “quickly” restores the dignity and blessings proper to a son and daughter of the Most High.

The fruit of this sacrament is not only the forgiveness of sins, necessary to those who have sinned. It ‘brings about a true “spiritual resurrection”, restoration of the dignity and blessings of the life of the children of God, of which the most precious is friendship with God’ (Catechism of the Catholic Church, n. 1468). It would be an illusion to want to strive for holiness in accordance with the vocation that God has given to each one of us without frequently and fervently receiving this sacrament of conversion and sanctification. —POPE JOHN PAUL II, Address to Apostolic Penitentiary, March 27th, 2004, Rome; www.fjp2.com

God wants to do this! As Jesus said to St. Faustina in a heart wrenching revelation:

The flames of mercy are burning Me—clamoring to be spent; I want to keep pouring them out upon souls; souls just don’t want to believe in My goodness. —Divine Mercy in My Soul, Diary, n. 177

There is someone reading this who is covered in the pig-slop of sin, reeking with the stench of guilt, crushed by the weight of their fault. You are the one that the Father is running to this very moment…

Who is there like you, the God who removes guilt and pardons sin for the remnant of his inheritance; Who does not persist in anger forever, but delights rather in clemency, and will again have compassion on us, treading underfoot our guilt? You will cast into the depths of the sea all our sins. (First reading)