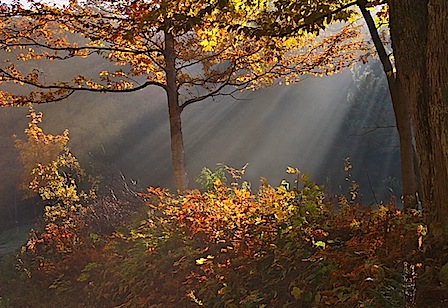 IN the Spring of 2006, I received a very strong word that is in the forefront of my thoughts these days…

With the eyes of my soul, the Lord had been giving me brief "glimpses" into the various structures of the world: economies, political powers, the food chain, the moral order, and elements within the Church. And the word was always the same:

The corruption is so deep, it must all come down.

The Lord was speaking of a Cosmic Surgery, down to the very foundations of civilization. It seems to me that while we can and must pray for souls, the Surgery itself is now irreversible:

When foundations are being destroyed, what can the upright do? (Psalm 11:3)

Even now the ax lies at the root of the trees. Therefore every tree that does not produce good fruit will be cut down and thrown into the fire. (Luke 3:9)

At the end of the six thousandth year, all wickedness must be abolished from the earth, and righteousness reign for a thousand years [Rev 20:6]… —Caecilius Firmianus Lactantius (250-317 A.D.; Early Church Father and ecclesiastical writer), The Divine Institutes, Vol 7.

Creation operates by, and is a product of God’s order:

You have arranged all things by measure and number and weight. (Wis 11:20)

He is the very "glue" of all created things:

All things were created through him and for him. He is before all things, and in him all things hold together. (Col 1:16-17)

When man begins to toy with God’s order, and furthermore reject the very "glue" of that order, creation itself begins to come apart. We see this all around us today as our oceans begin to die, various land and sea animals begin to inexplicably disappear, bee populations diminish, weather patterns become more erratic, and plagues, famine, heat waves, droughts, flooding, and wind, ice, and hail storms ravage countrysides more frequently.

Conversely, if sin can affect creation, so too can holiness. It is in part this holiness, to be revealed in the children of God, which all of creations waits for.

For creation awaits with eager expectation the revelation of the children of God; for creation was made subject to futility, not of its own accord but because of the one who subjected it, in hope that creation itself would be set free from slavery to corruption and share in the glorious freedom of the children of God. We know that all creation is groaning in labor pains even until now… (Rom 8:19-22)

The Church prays and hopes for a day when the Spirit will come and "renew the face of earth." When He comes in a Second Pentecost to usher in an Era of Peace, creation will also be renewed to some degree—this, according to the understanding given us by the Early Church Fathers of that "thousand year" period of peace (Rev 20:6):

And it is right that when creation is restored, all the animals should obey and be in subjection to man, and revert to the food originally given by God… that is, the productions of the earth. —St. Irenaeus of Lyons, Church Father (140–202 A.D.); Adversus Haereses, Irenaeus of Lyons, passim Bk. 32, Ch. 1; 33, 4, The Fathers of the Church, CIMA Publishing Co.; (St. Irenaeus was a student of St. Polycarp who personally knew the Apostle John and learned from him, and was later consecrated bishop of Smyrna by John)

Because the chastisement that is coming from Heaven will reduce much of the infrastructure to dust, mankind as a whole will return to living off the land once again.

Thus says the Lord GOD: When I purify you from all your crimes, I will repeople the cities, and the ruins shall be rebuilt; the desolate land shall be tilled, which was formerly a wasteland exposed to the gaze of every passer-by. "This desolate land has been made into a garden of Eden," they shall say. (Ez 36:33-35)

Creation, reborn and freed from bondage, will yield an abundance of food of all kind from the heaven’s dew and the fertility of the earth. —St. Irenaeus, Adversus Haereses

The earth will open its fruitfulness and bring forth most abundant fruits of its own accord; the rocky mountains shall drip with honey; streams of wine shall run down, and rivers flow with milk; in short the world itself shall rejoice, and all nature exalt, being rescued and set free from the dominion of evil and impiety, and guilt and error. —Caecilius Firmianus Lactantius, The Divine Institutes

Recall again from Part I the Jewish festival Shavuoth:

The food eaten on this day shall symbolize milk and honey [a symbol of the promised land], and is made up of dairy products. —http://lexicorient.com/e.o/shavuoth.htm

The description of a land flowing with "milk and honey" is symbolic here as it is in Sacred Scripture. The "paradise" to come is mainly a spiritual one, and in some ways, it will attain to a higher degree of union with God than Adam and Eve enjoyed. That is because, through Christ’s death and resurrection, our relationship with the Father is not only restored, but we ourselves have become a new creation capable of sharing in God’s own glory (Rom 8:17). Thus, in reference to Adam’s sin, the Church cries out in joy: O felix culpa, quae talum ac tantum meruit habere Redemptorem ("Oh happy fault, which gained for us so great a Redeemer!")

During the Era of Peace, before the end of time, Our Lord himself said that the Gospel would be preached to the ends of the earth:

This gospel of the kingdom will be preached throughout the world as a witness to all nations, and then the end will come. (Matt 24:14)

The Gospel is first and foremost a Gospel of life. Man will still toil, but his work will be fruitful. His means will be simplified, but peace will be his reward. Childbirth will still be painful, but life will flourish:

These are the words of Isaiah concerning the millennium: ‘For there will be a new heaven and a new earth, and the former will not be remembered nor come into their heart, but they will be glad and rejoice in these things, which I create… There shall no more be an infant of days there, nor an old man that shall not fill up his days; for the child shall die a hundred years old… For as the days of the tree of life, so shall be the days of My people, and the works of their hands shall be multiplied. My elect shall not labor in vain, nor bring forth children for a curse; for they shall be a righteous seed blessed by the Lord, and their posterity with them. —St. Justin Martyr, Dialogue with Trypho, Ch. 81, The Fathers of the Church, Christian Heritage; cf. Is 54:1

If the Church is living in the Divine Will, then it will be living the "theology of the body" when the creative and conjugal acts of married love will universally reflect not only the Will of God, but the Holy Trinity itself, as God intended these acts to be and do.

In the above quote from St. Justin Martyr, he is not referring to the "new heavens and new earth" that will appear after the end of t
ime, but rather to a new era to come when "Thy kingdom come, thy will be done on earth as it is in Heaven." How can the face of the earth not be renewed in some fashion when the Creator Spiritus comes? With Satan and his legions chained in the abyss, with man respecting and using creation as God intended, and by the life-giving power of the Holy Spirit, creation will experience a new freedom.

Both Sacred Scripture and the Church Fathers refer to a time on earth when the rebellion of nature against man will seem suspended. Says St. Irenaeus:

All the animals who use the products of the soil will be at peace and in harmony with one another, completely at man’s beck and call. —Adversus Haereses

Then the wolf shall be a guest of the lamb, and the leopard shall lie down with the kid; The calf and the young lion shall browse together, with a little child to guide them… The baby shall play by the cobra’s den, and the child lay his hand on the adder’s lair. There shall be no harm or ruin on all my holy mountain; for the earth shall be filled with knowledge of the LORD, as water covers the sea… (Isa 11:6, 8-9)

Even the cosmos may be re-ordered due to the cosmic upheaval which man’s sins brought upon him:

Pope John Paul asserts that this renewal of creation is merely the fruit of God’s Kingdom at last embraced:

Again, it is hard to know how much of what the Church Fathers spoke of is symbolic of a spiritual renewal on earth, and how much is literal. What is certain is that God’s justice will prevail. It is also certain that Heaven and the perfection of all creation will not come until time ceases.

Since man always remains free and since his freedom is always fragile, the kingdom of good will
never be definitively established in this world.  —Spe Salvi, Encyclical Letter of POPE BENEDICT XVI, n. 24b

Pope John Paul II no doubt knew of this coming era as it was also promised by our Lady of Fatima as a "period of peace." A few years after his election to the seat of Peter, he said:

May there dawn for everyone the time of peace and freedom, the time of truth, of justice and of hope. —POPE JOHN PAUL II, Radio message during the Ceremony of Veneration, Thanksgiving and Entrustment to the Virgin Mary Theotokos in the Basilica of Saint Mary Major: Insegnamenti di Giovanni Paolo II, IV, Vatican City, 1981, 1246; The Message of Fatima, www.vatican.ca

We appear to be crossing into those days. Yes, cross-ing. The sufferings of this present time will not compare to the time of peace which God will grant His Church—a tremendous foretaste of the eternal joys of Heaven awaiting earth’s faithful pilgrims. It is this we must set our eyes upon, and pray like never before that we will take as many souls with us as possible into the "promised land."

Only at the end, when our partial knowledge ceases, when we see God "face to face", will we fully know the ways by which—even through the dramas of evil and sin—God has guided his creation to that definitive sabbath rest for which he created heaven and earth. —Catechism of the Catholic Church, n. 314