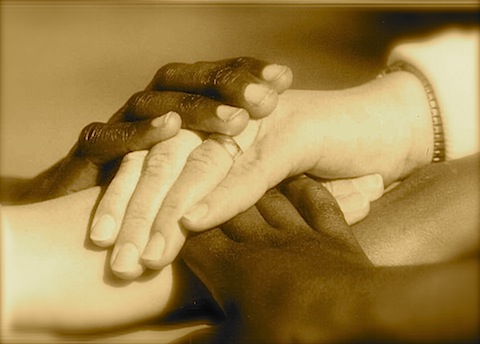 We must use every means and exert all our energy to bring about the utter disappearance of the enormous and detestable wickedness so characteristic of our time—the substitution of man for God; this done, it remains to restore to their ancient place of honor the most holy laws and counsels of the Gospel…—POPE PIUS X, E Supremi “On the Restoration of All Things in Christ”,Oct 4th, 1903

THE “Age of Aquarius” anticipated by new agers is merely a counterfeit of the true Era of Peace to come, an era spoken of by the Early Church Fathers and several pontiffs of the past century:

When it does arrive, it will turn out to be a solemn hour, one big with consequences not only for the restoration of the Kingdom of Christ, but for the pacification of… the world. We pray most fervently, and ask others likewise to pray for this much-desired pacification of society. —POPE PIUS XI, Ubi Arcani dei Consilioi “On the Peace of Christ in his Kingdom”, December 23, 1922

Scripture and Magisterial teaching confirm that within time, that is, “the fullness of time,” all things will be “restored” in Christ, a work won on the Cross, and being perfected in history (cf. Col 1:24).

God planned in the fullness of time to restore all things in Christ. —Lenten Antiphon, Evening Prayer, Week IV, Liturgy of the Hours, p. 1530; cf. Eph 1:10

Let there be revealed, once more, in the history of the world the infinite saving power of the Redemption: the power of merciful Love! May it put a stop to evil! May it transform consciences! May your Immaculate Heart reveal for all the light of Hope! —POPE JOHN PAUL II, The Message of Fatima, www.vatican.va; Insegnamenti di Giovanni Paolo II, VII, 1 (Vatican City, 1984), 775-777

What then will this restoration look like in the Era of Peace?

At the end of this era, God will effect a purification of the earth through an unprecedented outpouring of the Holy Spirit. Fr. Joseph Iannuzzi, in his theological treatise on the Era of Peace, writes:

From man to beast, from galaxies to planets, all creation will experience an outpouring of grace, a “new Pentecost,” that will set it free from its slavery to corruption. —The Splendor of Creation, Rev. Joseph Innanuzzi, p.72

The Jewish feast, which Pentecost coincides with and fulfills, is called Shavuoth.

The feast is both seen upon as a festival of grains, and as a commemoration of the giving of the Law on Mount Sinai… God is praised in the synagogue, which is decorated with flowers and fruits. The food eaten on this day shall symbolize milk and honey [a symbol of the promised land], and is made up of dairy products. —http://lexicorient.com/e.o/shavuoth.htm

Note that it is a “festival of grains” when the “first fruits” are gathered. So too, the Era of Peace begins with the “first resurrection” of the saints who “had not worshipped the beast or its image nor had accepted its mark on their foreheads or hands” (Rev 20:4-6; see The Coming Resurrection.) This “festival” is also a celebration of the great harvest reaped through Divine Mercy before the end of the age.

GIVING OF THE LAW

One of the main features of Shavuoth is the commemoration of the “giving” of the Law. In the New Testament, the “Law” is summed up in this: to love one another (John 15:17). The Church is now entering corporately into the “dark night of the soul” (see Wedding Preparations). When she emerges from this purification, she will enter an age of unprecedented mystical union with God and neighbour, an age of love.

The time has come to exalt the Holy Spirit in the world… I desire that this last epoch be consecrated in a very special way to this Holy Spirit… It is His turn, it is His epoch, it is the triumph of love in My Church, in the whole universe. —Jesus to Venerable Conchita Cabrera de Armida, Conchita, Marie Michel Philipon, p. 195-196

The love of God is this: to keep His commandments. And this will be the gift to the Church during the new epoch: to live in union with the Divine Will of God thus fulfilling the words of Christ, that the Father’s “will be done earth as it is in heaven.” It will be possible through the power of the Holy Spirit, purifying and illuminating the Church, drawing her into greater and greater degrees of union and perfection.

Ah, my daughter, the creature always races more into evil. How many machinations of ruin they are preparing! They will go so far as to exhaust themselves in evil. But while they occupy themselves in going their way, I will occupy Myself with the completion and fulfillment of My Fiat Voluntas Tua (“Thy will be done”) so that My Will reign on earth—but in an all-new manner. Ah yes, I want to confound man in Love! Therefore, be attentive. I want you with Me to prepare this Era of Celestial and divine Love… —Servant of God, Luisa Piccarreta, Manuscripts, Feb 8th, 1921; excerpt from The Splendor of Creation, Rev. Joseph Innanuzzi, p.80, with the permission of the Archbishop of Trani, overseer of Piccarreta’s writings.

The symbol par excellence of this union of the will of man with the Divine Will is that of the “Two Hearts” of Jesus and Mary. Keeping in mind that the Blessed Mother is a symbol and prefigurement of the Church, the Triumph of 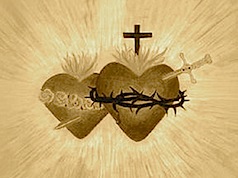 Our Lady is to bring her children of all nations into the divine union she shares with her Son, symbolized by the flames of the Holy Spirit (of Love) which leap from both Hearts. What she has, we will become, through her.

The Mother of God is a type of the Church in the order of faith, charity and perfect union with Christ… Seeking after the glory of Christ, the Church becomes more like her exalted Type, and continually progresses in faith, hope and charity, seeking and doing the will of God in all things… —Lumen Gentium, Second Vatican Council, n. 63, 65

Her Triumph, then, is for the Church to ascend to her heights as the Mediatrix, Co-redemptrix, and Advocate of all graces for the whole world. What a triumph this will be when the Church, the true Mother that she is, spreads her wings over the four corners of the earth, and becomes the maternal sacrament of love for every culture and nation, not just in hope, but in reality. That is the day when we will have crossed the threshold of hope from the era of faith into the era of love.

The praise of God in the “synagogue” is symbolic of the praise which will ring out from all the nations in worship of Jesus in the Blessed Sacrament. Christ will not reign on earth in the flesh, except in His Eucharistic Body and in His Church, which will become One “temple,” according to Jesus’ prayer for unity of all believers (John 17:21) that “Christ may be all and in all” (Col 3:2). I believe St. Faustina was given a glimpse of this unity, which will come about after the Church passes through the “pillars” of the Two Hearts (see Pope Benedict and the Two Columns.) In a vision, she saw herself and another person planting two pillars on the ground with the Divine Mercy Image suspended in between them.

In an instant, there stood a large temple, supported both from within and from without, upon these two pillars. I saw a hand finishing the temple, but I did not see the person. There was a great multitude of people, inside and outside the temple, and the torrents issuing from the Compassionate Heart of Jesus were flowing down upon everyone. —Diary of St. Maria Faustina Kowalska, Divine Mercy in My Soul, n. 1689; May 8, 1938

Even though we seen signs of decay all around us; even though serious prophetic warnings of chaos and destruction have been issued to the world and are beginning to unfold… in the end, the Church will triumph. Good will prevail over evil. However, if there is to be union with God, the human will—in order to be redeemed—must undergo the form of the Redemption, that is, the Cross. The human will, patterned after Christ’s “yes” to the Father in Gethsemane, must accept all the uncertainties, darkness, temptations, torments, and trials of its own Passion in order to experience the Resurrection. This is precisely what St. Paul taught:

Have among yourselves the same attitude that is also yours in Christ Jesus, who, though he was in the form of God, did not regard equality with God something to be grasped. Rather, he emptied himself, taking the form of a slave, coming in human likeness; and found human in appearance, he humbled himself, becoming obedient to death, even death on a cross. Because of this, God greatly exalted him… (Phil 2:5-9)

When this time of tribulation is over, there will be an “exaltation” of God’s People, a Resurrection day of rest in an age of peace. It will be a time when the survivors of this present era will experience the joys of the saints beyond what any generation has ever experienced. It will not be an end to death, nor even of sin, since the radical gift of free will still be operative. Neither will it be the false utopia promised by the New Age movement where man and technology, in a marriage of wickedness, attempt to create a “new Adam” and “new Eve.” Rather, it will be a time of exalted holiness when the Kingdom of Heaven will reign on earth in the saints.

While St. Augustine says that “the joys of the saints, in that Sabbath, shall be spiritual, and consequent on the presence of God,” the planet itself may also enter a renewal of its “flower and fruits.” More on that in Part II…

Recently, our webcast studio and shop were damaged by high winds. The repairs costs to the roofs are $3400.  We ended up paying out of pocket since it would have been more expensive to make an insurance claim. At a time when our ministry is already squeezing juice out of the orange, it was an unexpected “blow.” We are grateful to those who are able to help us financially.