THE NOW WORD ON MASS READINGS
for Tuesday, December 13th, 2016
Opt. Memorial of St. John of the Cross 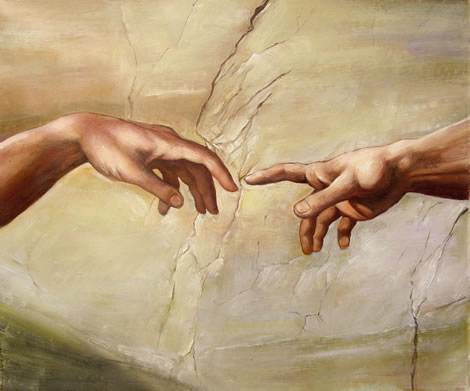 From the Creation of Adam, Michelangelo, c. 1511

Somehow, after thousands of years of salvation history, the suffering, death and Resurrection of the Son of God, the arduous journey of the Church and her saints through the centuries… I doubt those will be the Lord’s words in the end. Scripture tells us otherwise:

By myself I swear, uttering my just decree and my unalterable word: To me every knee shall bend; by me every tongue shall swear, saying, “Only in the LORD are just deeds and power. Before him in shame shall come all who vent their anger against him. In the LORD shall be the vindication and the glory of all the descendants of Israel. (Today’s first reading)

God’s Word will be vindicated. His promises will be fulfilled: creation will be renewed, although not perfectly until the end of human history. But within time, the Scriptures speak of a triumph of Christ in which His peace and Gospel will reach the ends of the earth.

Kindness and truth shall meet; justice and peace shall kiss. Truth shall spring out of the earth, and justice shall look down from heaven. (Today’s Psalm)

Wisdom will be vindicated. The following was first published December 18th, 2007…

THE VINDICATION OF WISDOM

Posted in HOME, MASS READINGS, THE ERA OF PEACE.