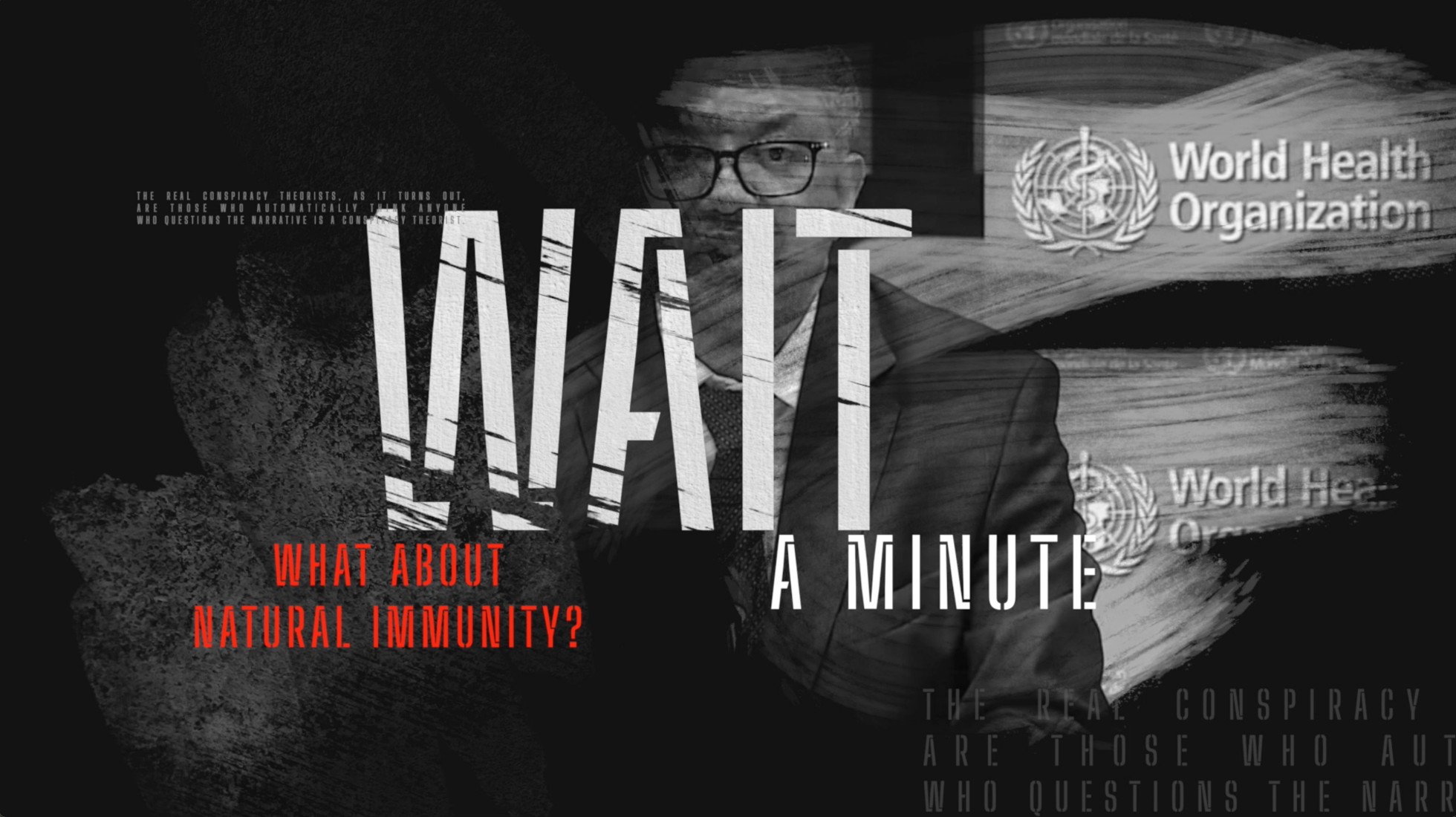 AFTER three years of prayer and waiting, I am finally launching a new webcast series called “Wait a Minute.” The idea came to me one day while watching the most extraordinary lies, contradictions and propaganda being passed off as “news.” I often found myself saying, “Wait a minute… that’s not right.”

That’s no more true than this past year. As a former television editor and journalist, I have never seen the kind of propaganda we have today, either in content or scale. It is so widespread, so pervasive, that when you talk to the average person about what is really going on, they often look at you like you just questioned whether water is wet. And their well-thought-out response? “Oh, that’s conspiracy theory.” Of course, that condescending and dismissive moniker has done more damage to critical thinking than perhaps any others — usually followed by other shaming phrases like “anti-vaxxer, anti-choice, anti-masker, climate-denier, etc.” as though these are somehow rational arguments in themselves.

Massive brainwashing, on a scale that has dwarfed the bewitching that ensnared common Germans in World War II, has taken place on a global scale.[1]cf. The Strong Delusion Even the popes recognized this happening over a century ago,[2]cf. Why Aren’t the Popes Shouting? long before Tweets and Facebook.

There is another explanation for the rapid diffusion of the Communistic ideas now seeping into every nation, great and small, advanced and backward, so that no corner of the earth is free from them. This explanation is to be found in a propaganda so truly diabolical that the world has perhaps never witnessed its like before. It is directed from one common center. —POPE PIUS XI, Divini Redemptoris: On Atheistic Communism, Encyclical Letter, March 19th, 1937; n. 17

We are now living the end-game of this successful indoctrination:

It’s a disturbia. It’s maybe a group neurosis. It is something that’s come over the minds of people all over the world. Whatever is going on is going on in the tiniest island in the Philippines and Indonesia, the smallest little village in Africa and South America. It’s all the same — it’s come over the entire world. —Dr. Peter McCullough, MD, MPH, August 14th, 2021; 40:44, Perspectives on the Pandemic, Episode 19

What the last year has really shocked me to the core about is that in the face of an invisible, apparently serious threat, rational discussion went out of the window… When we look back on the COVID era, I think it will be seen as other human responses to invisible threats in the past have been seen, as a time of mass hysteria.  —Dr. John Lee, Pathologist; Unlocked video; 41:00

One of the greatest clues to whether you’re reading propaganda or not is whether the article, news story, or “fact-checker” in question begins by attacking the person rather than their arguments. Some of the most brilliant scientists and doctors in the world are being treated like clowns because they have dared to contradict the narrative. Brave doctors have had their licenses revoked, scientists and professors have been deplatformed, and common citizens have been fired from their jobs — all of them for putting the truth before their careers. They are truly the heroes and martyrs of our time when, heartbreakingly, the Church has by and large fled or remained silent (yes, this is Our Gethsemane).

Jesus said that Satan is a liar and the father of lies — a murderer from the beginning (John 8:44). It’s a simple but effective modus operandi that has worked since the Garden of Eden: lie to ensnare, ensnare to destroy. We are seeing this programme unfold again, this time on a global scale… and it’s truly stunning to see how deceptive and successful it has been. As a former journalist, I feel a certain duty, then, to try to pierce this darkness with the light of truth, even though I am but a small voice crying out in the wilderness.

Many years ago, as I stared out into the night sky, unemployed, desperate to provide for my family, the Lord spoke quietly into my heart:

I am asking you to be faithful, not successful.

A priest said to me this past year, “There’s nothing I can do. What’s coming is coming, and I’ll deal with it then.” I replied, “But Fr., it’s not a matter of whether we can turn this tide around — and I’m certain that what must come will come — but it’s the witness we give in the fight. We may not win the battle, but we might inspire someone else to become the next martyr or saint who will touch a million lives… like Saints John de Brébeuf or Maximillian Kolbe.”

Martin Luther King Jr. once said, “Our lives begin to end the day we become silent about things that matter.”

Truth is not merely theological treatises or Scriptural passages. The whole economy of truth runs through creation, the sciences, natural law and man’s conscience — down to the smallest detail. Like the sun’s rays from which nothing escapes, the Divine Will has left nothing untouched by divine genius.

In Wisdom is a spirit
intelligent, holy, unique,
Manifold, subtle, agile,
clear, unstained, certain,
Not baneful, loving the good, keen,
unhampered, beneficent, kindly,
Firm, secure, tranquil,
all-powerful, all-seeing,
And pervading all spirits,
though they be intelligent, pure and very subtle.
For Wisdom is mobile beyond all motion,
and she penetrates and pervades all things by reason of her purity. (Wisdom 7:22-23)

Hence, even a certain truth about the world, how something works, why it works… is a tiny shaft of divine light that somehow sets us free as creatures made in the imago Dei. How many men fell in love with science in bygone eras because, through it, they seemed to pull back the veil that conceals the Creator, just a little bit more. But today, medicine and the sciences have become as lost and disconnected from their divine origin as the ancient Babylonians who thought they could build a tower to the heavens[3]cf. The New Tower of Babel instead of simply looking to the One created them.

For they search busily among his works,
but are distracted by what they see,
because the things seen are fair.

But again, not even these are pardonable.
For if they so far succeeded in knowledge
that they could speculate about the world,
how did they not more quickly find its Lord?
(Wisdom 13:1-9)

That said, I have struggled deeply at times wondering if I, too, am distracted but in other ways. What has helped me immensely in my discernment lately has been the flood of letters from around the world, from scientists, priests, and laity alike, encouraging me to keep going.

And so, with that, I have launched this new webcast series called Wait a Minute (and created a category in the sidebar for easy access). These are short, direct webcasts intended to pierce the lies, contradictions and propaganda. This will also allow me the ability to focus my writings on the more crucial truths: our relationship with God and continued spiritual preparation for the end of this era.

Before I present my first webcast in this series below, let me say how much I appreciate and need your prayers. The spiritual warfare preceding this webcast, as well as my documentary Following the Science? (which now has over a million views!) is intense and at times immobilizing. Please, if you could, offer a bead or two or your rosaries for this ministry.

Wait a Minute – What About Natural Immunity

The following webcast is, to me, addressing perhaps the greatest battlefront against the powerful health technocracy that has all but crushed freedom. As you’ll see, the outright dismissal of our God-given natural immunity and ability to fight disease — and subsequent idolization of “The Vaccine” — is really an attack on God himself.

The Lord’s question: “What have you done?”, which Cain cannot escape, is addressed also to the people of today, to make them realize the extent and gravity of the attacks against life which continue to mark human history… Whoever attacks human life, in some way attacks God himself. —POPE JOHN PAUL II, Evangelium Vitae; n. 10

The World Health Organization redefined the definition of herd immunity last year saying it no longer includes immunity through natural infection. But wait a minute…