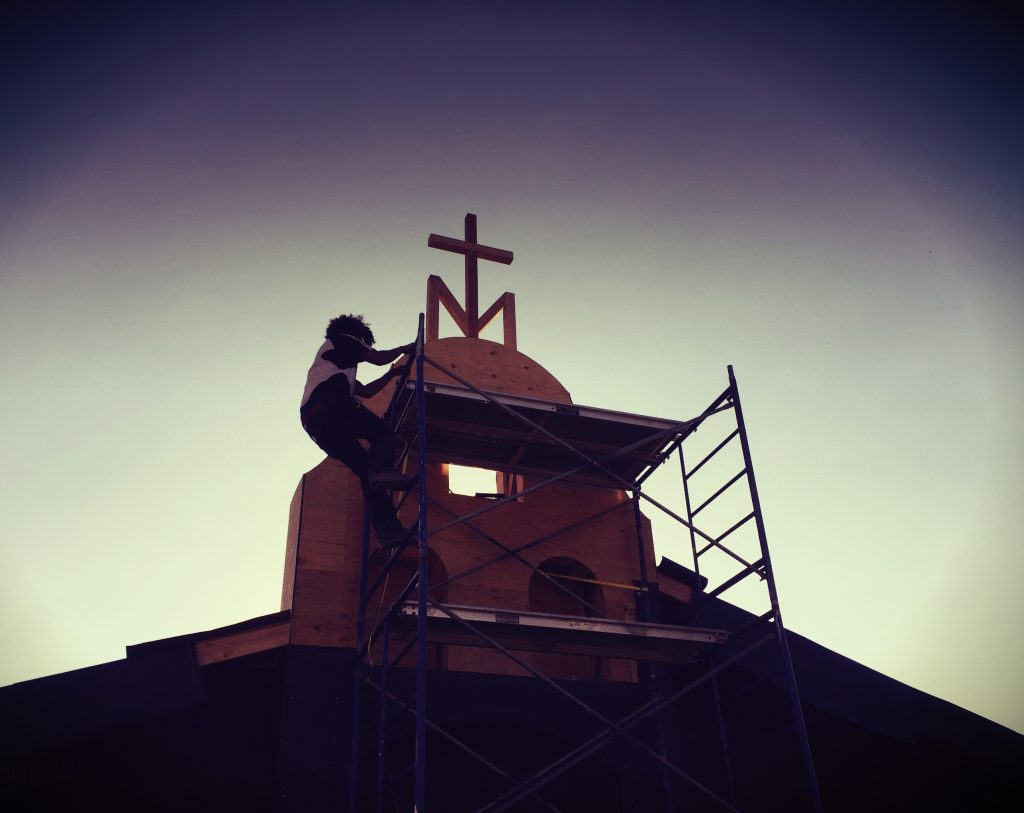 IT was to be our last Mass at the Monastery before my daughter and I would fly back to Canada. I opened my missalette to August 29th, the Memorial of The Passion of Saint John the Baptist. My thoughts drifted back to several years ago when, while praying before the Blessed Sacrament in my spiritual director’s chapel, I heard in my heart the words, “I am giving you the ministry of John the Baptist.” (Perhaps this is why I sensed Our Lady call me by the strange nickname “Juanito” during this trip. But let’s remember what happened to John the Baptist in the end…)

“So what do you wish to teach me today, Lord?” I asked. My answer came a moment later as I read this brief meditation from Benedict XVI:

The task set before the Baptist as he lay in prison was to become blessed by this unquestioning acceptance of God’s obscure will; to reach the point of asking no further for external, visible, unequivocal clarity, but instead, of discovering God precisely in the darkness of this world and of his own life, and thus becoming profoundly blessed. John, even in his prison cell, had to respond once again and anew to his own call for metanoia… ‘He must increase; I must decrease’ (Jn 3:30). We will know God to the extent that we are set free from ourselves. —POPE BENEDICT XVI, Magnificat, Monday, August 29th, 2016, p. 405

Here was a profound summary of the past twelve days, of what Our Lady was teaching: you need to be emptied of self in order to be filled with Jesus—who is coming. [1]cf. Dear Holy Father… He is Coming! Our Lady 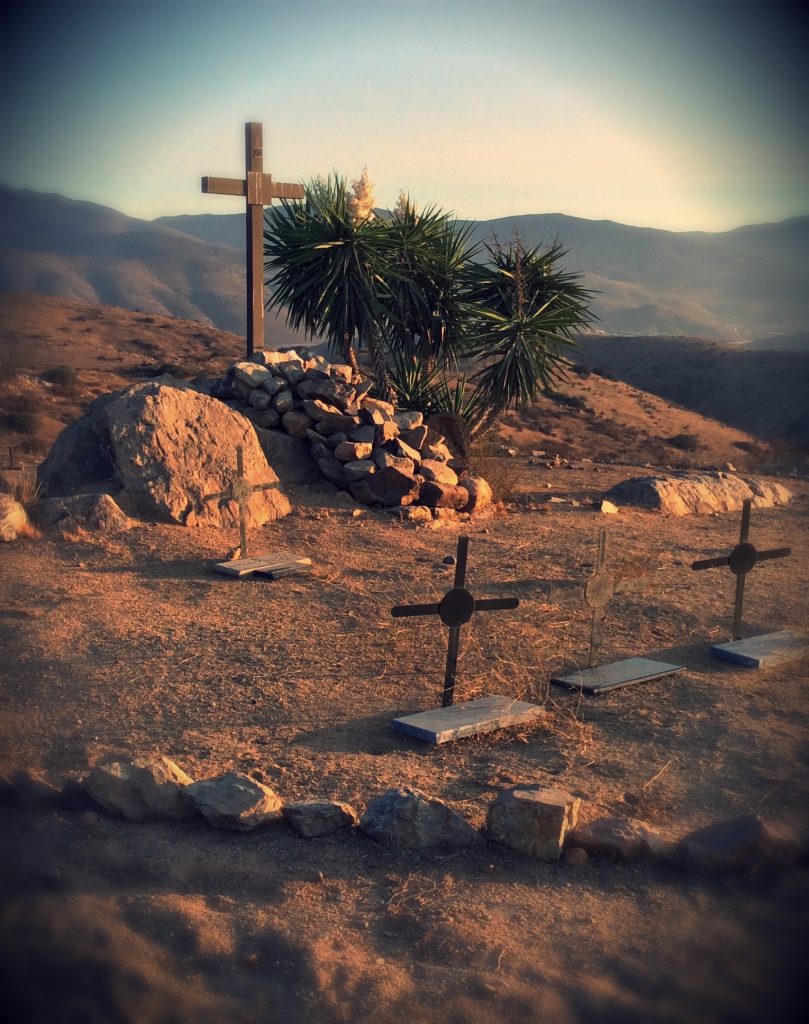 was saying that we must deeply and deliberately live what she is teaching: the path of self-annihilation—and to not be afraid of this.

Indeed, since that day, something has “shifted” in my own life. The Lord is providing more and more crosses to bring about this self-annihilation. How? By opportunities to renounce my “rights”, to renounce my way, my privileges, my desires, my reputation, even my desire to be loved (since this desire is often tainted with ego). It is a willingness to be misunderstood, thought of poorly, to be forgotten, set aside, and unnoticed. [2]One of my favourite prayers is the Litany of Humility.  And this can be painful, even frightening, because it truly is the death of self. But here is the key to why this is really not a terrible thing at all: the death of the “old self” coincides with the birth of the “new self”, the image of God in whom we are created. As Jesus said:

For whoever wishes to save his life will lose it, but whoever loses his life for my sake will save it. (Luke 9:24)

Yet, there is an incredible context to all this—one that we are so privileged, so blessed to be living in at this hour. And it is that Our Lady is preparing a small remnant (and it is only small because few are listening) for a special blessing, a special gift that, according to the approved messages of Elizabeth Kindelmann, has never been given as such “since the Word became Flesh.” But in order to receive this new gift, we need to essentially become copies of her.

Servant of God Luis Maria Martinez, the late Archbishop of Mexico City, put it this way:

…a new love, a new possession, demands a new surrender, more generous, more trustful, more tender than ever. And for such a surrender a new forgetfulness is necessary, one full and perfect. To rest in the Heart of Christ is to submerge and lose oneself in Him. For these celestial attainments the soul must disappear in the ocean of oblivion, in the ocean of love. —from Only Jesus by Sr. Mary St. Daniel; cited in Magnificat, September, 2016, p. 281

St. Teresa of Calcutta used to say that suffering is the “kiss of Christ”. But we might be tempted to say, “Jesus, stop kissing me!” That is because we 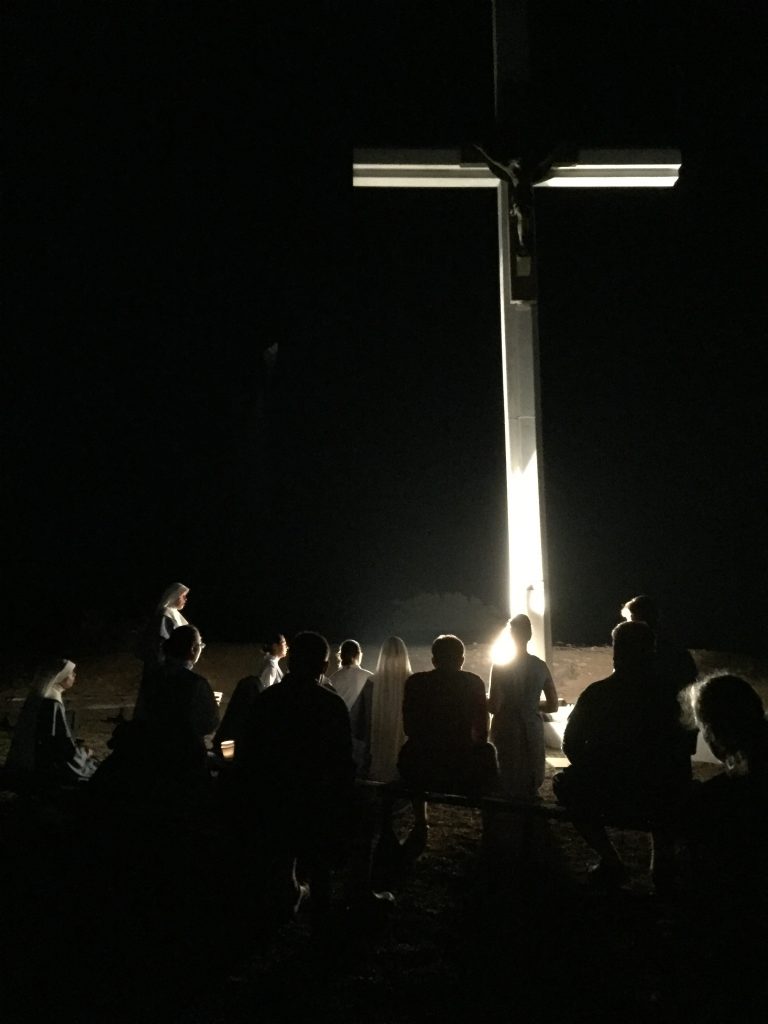 misunderstand what this means. Jesus does not permit suffering to come our way because suffering, in itself, is a good. Rather, the suffering, if embraced, annihilates all that is “me” so that I can have more of “Him.” And the more I have of Jesus, the happier I will be. That is the Christian’s secret to suffering! The Cross, when accepted, leads to a deeper joy and peace—the opposite of what the world thinks. That is the wisdom of the Cross.

The message of Our Lady in these “end times” is so incredible, so nearly incomprehensible, that the angels both tremble and rejoice at it. And the message is this: through our consecration to Mary (which means to become copies of her trust, humility, and obedience), God is going to make each faithful soul a new “City of God.”

Such was the message again of the first reading that day:

The word of the Lord came to me thus: Gird your loins; stand up and tell them all that I command you. Be not crushed before them; for it is I this day who have made you a fortified city… They will fight against you, but not prevail over you. for I am with you to deliver you, says the Lord. (Jeremiah 1:17-19)

The City of God. This is what each of us is to become through Our Lady’s 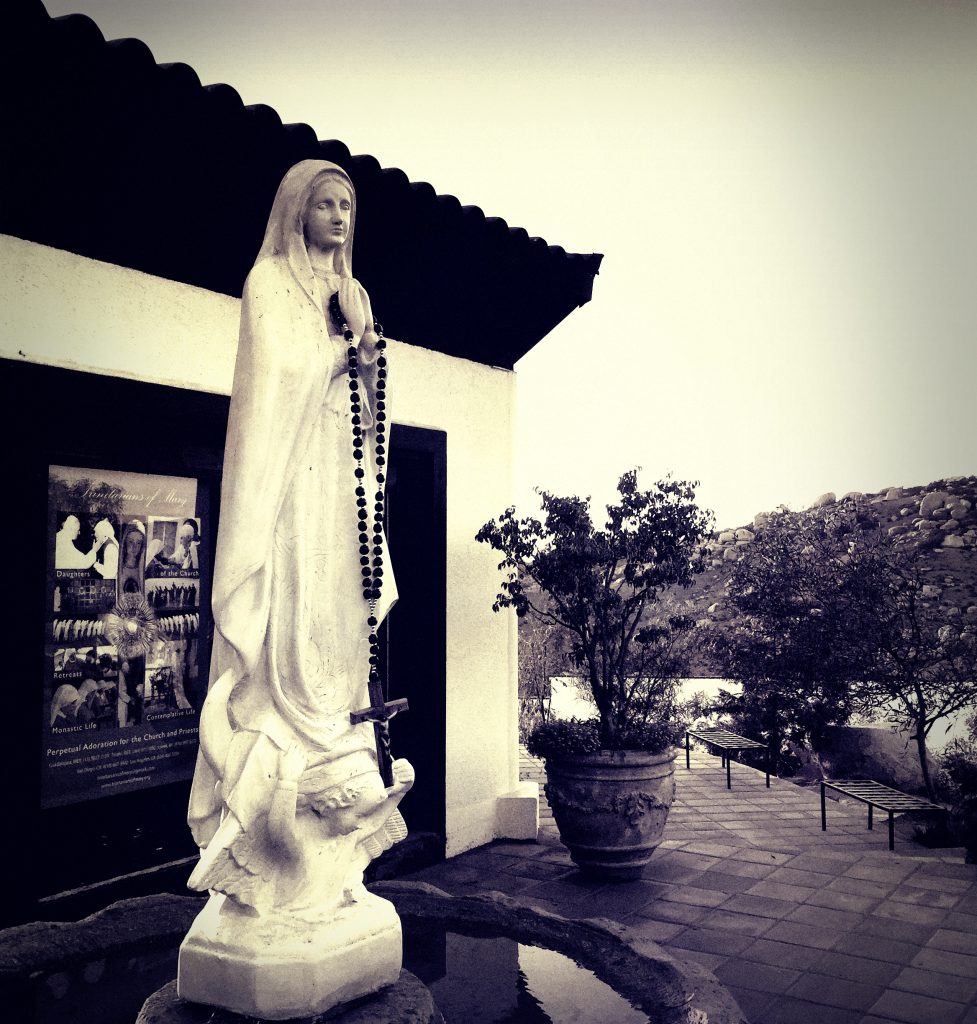 triumph. It is the final stage of the Church’s journey of purification to make her a pure and unblemished Bride so as to enter into her definitive state in Heaven. The Blessed Virgin Mary is a “prototype”, “mirror” and “image” of what the Church is, and is to become. Listen carefully to the prophetic words of St. Louis de Montfort, for I believe they are beginning to be fulfilled now in our midst:

The Holy Spirit, finding his dear Spouse present again in souls, will come down into them with great power. He will fill them with his gifts, especially wisdom, by which they will produce wonders of grace… that age of Mary, when many souls, chosen by Mary and given her by the most High God, will hide themselves completely in the depths of her soul, becoming living copies of her, loving and glorifying Jesus.

We are given reason to believe that, towards the end of time and perhaps sooner than we expect, God will raise up people filled with the Holy Spirit and imbued with the spirit of Mary. Through them Mary, Queen most powerful, will work great wonders in the world, destroying sin and setting up the kingdom of Jesus her Son upon the RUINS of the corrupt kingdom which is this great earthly Babylon. (Rev.18:20) —St. Louis de Montfort, Treatise on True Devotion to the Blessed Virgin, n. 58-59, 217

This is why, during my time at the monastery, those words from Ephesians that God has given us “every spiritual blessing in the heavens” came alive to me. [3]cf. Ephesians 1:3-4 They are an echo of the words spoken to Mary at the Annunciation: “Hail, full of grace.”

The expression “full of grace” points to that fullness of blessing mentioned in Paul’s Letter. The Letter further implies that “the Son”, once and for all, has directed the drama of history toward the blessing. Mary, therefore, who gave birth to him, is truly “full of grace”—she becomes a sign in history. The angel greeted Mary and from then on it is clear that the blessing is stronger than the curse. The sign of the woman has become the sign of hope, leading the way to hope. —Cardinal Ratzinger (BENEDICT XVI) Mary: God’s Yes to Man, p. 29-30

Yes, the sign of the Woman clothed in the sun has become the “sign of the times.” And thus, as St. John Paul II taught…

Mary thus remains before God, and also before the whole of humanity, as the unchangeable and inviolable sign of God’s election, spoken of in Paul’s Letter: “In Christ he chose us… before the foundation of the world… He destined us… to be his sons” (Eph 1:4,5). This election is more powerful than any experience of evil and sin, than all the “enmity” which marks the history of man. In this history Mary remains a sign of sure hope. —Redemptoris Mater, n. 12

…which is why he continually exhorted us to “be not afraid!”

THE JOURNEY HOME… AND BEYOND

My time at the monastery was a living experience of Christ’s words in John’s Gospel: 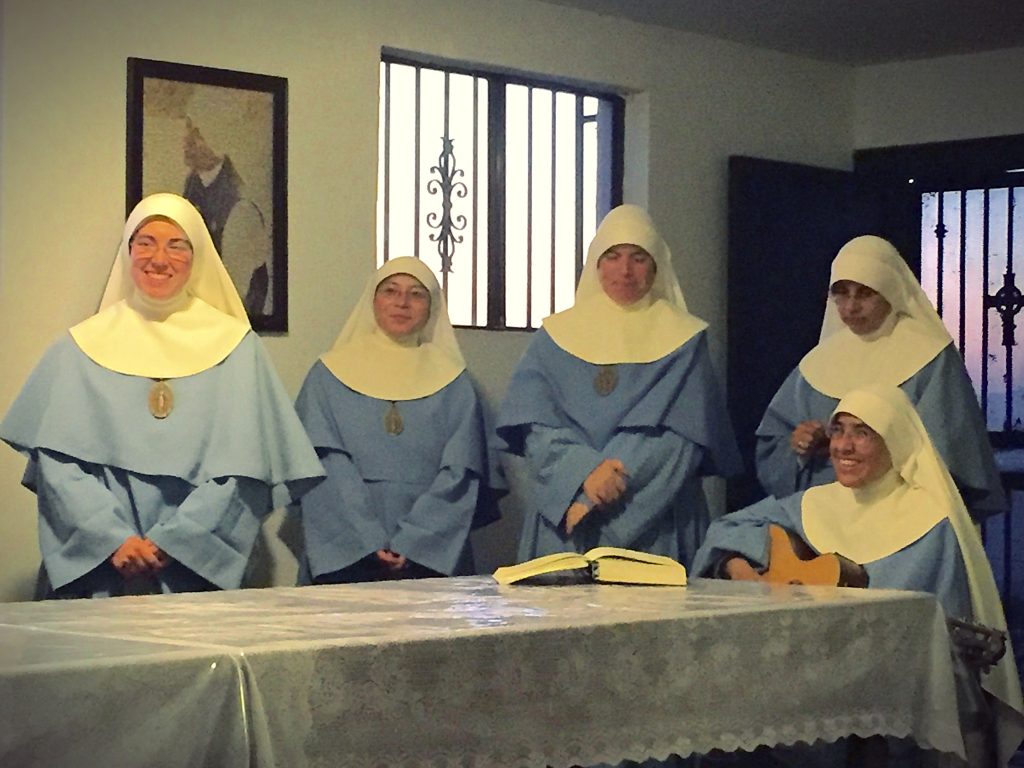 I drank from these waters on so many levels, from different souls and experiences. But now, Jesus is saying that you and I must prepare ourselves to become these living wells of grace—or be swept away in the satanic deluge that is sweeping through our world, dragging many souls to perdition. [4]cf. The Spiritual Tsunami

No sooner had I left the monastery than I began to feel the gravity of the flesh, the weight of the world in which we live. But it was precisely in that reality that I saw, for one last time, a parable of everything I’d been taught…

On our way back to the airport, we approached the Mexican/U.S. border in a long line of cars. It was a hot, humid afternoon in Tijuana when even the air conditioning could barely cut through the stifling heat. Moving alongside our vehicles was the common site of vendors peddling everything from cookies to 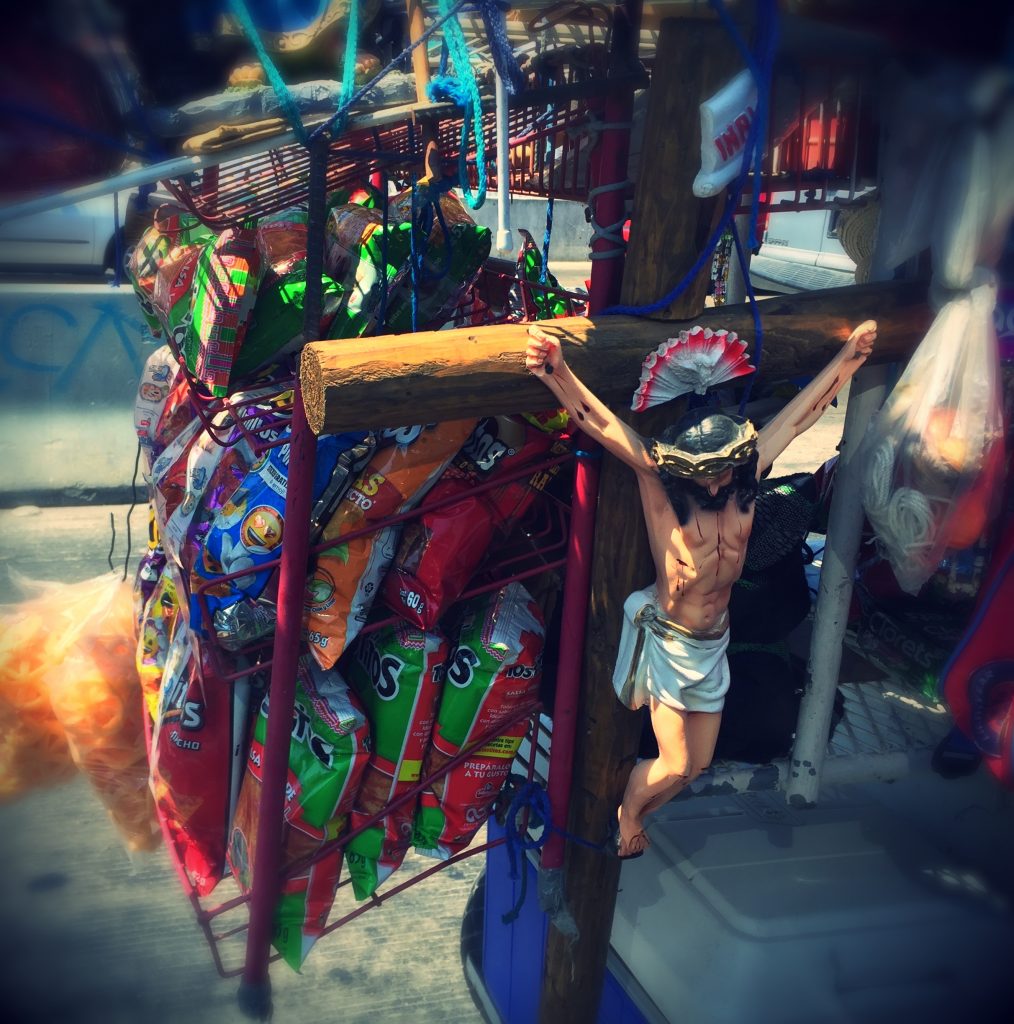 crucifixes. But from time to time, a panhandler would pass through the vehicles hoping for a coin or two.

As we were about to pass through the border, a man in a wheelchair appeared several cars ahead. His arms and hands were so severely handicapped as to almost render them useless. They were tucked in beside his body like wings such that the only way he could maneuver between the cars in his wheelchair was with his feet. I watched as he awkwardly scrambled across the hot pavement under the burning midday sun. Finally, a van window opened, and we watched as someone placed some money into the poor man’s hand, put an orange at his side and stuffed a bottle of water into his shirt pocket. 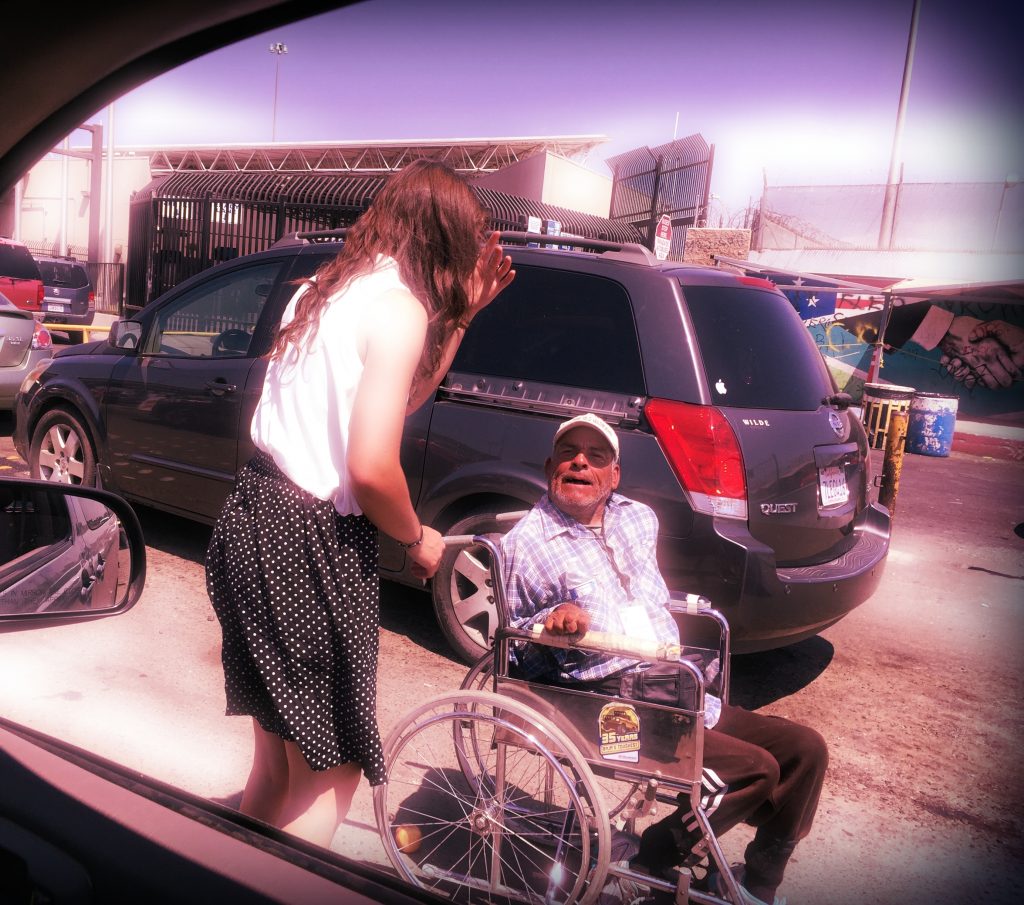 Suddenly, my daughter left our vehicle and headed toward this crippled man, who was still several vehicles ahead of us. She reached out and touched his hand and spoke some words to him, and then put something into his pocket. She returned to our van where the rest of us, watching all this unfold, sat in silence. As the car line proceeded, we eventually caught up to the man. When he was right beside us, the door flung open again, and my daughter walked over to him once more. I thought to myself, “What on earth is she doing?” She reached into the man’s pocket, took out the water bottle, and began to give him a drink.

For the last time in Mexico, tears would fill my eyes as the old man grinned ear to ear. For she was loving him to the last drop, and he, for a moment, found refuge in the City of God.

Thank you for supporting this apostolate.

[+]
Posted in HOME, THE ERA OF PEACE, WHERE HEAVEN TOUCHES.