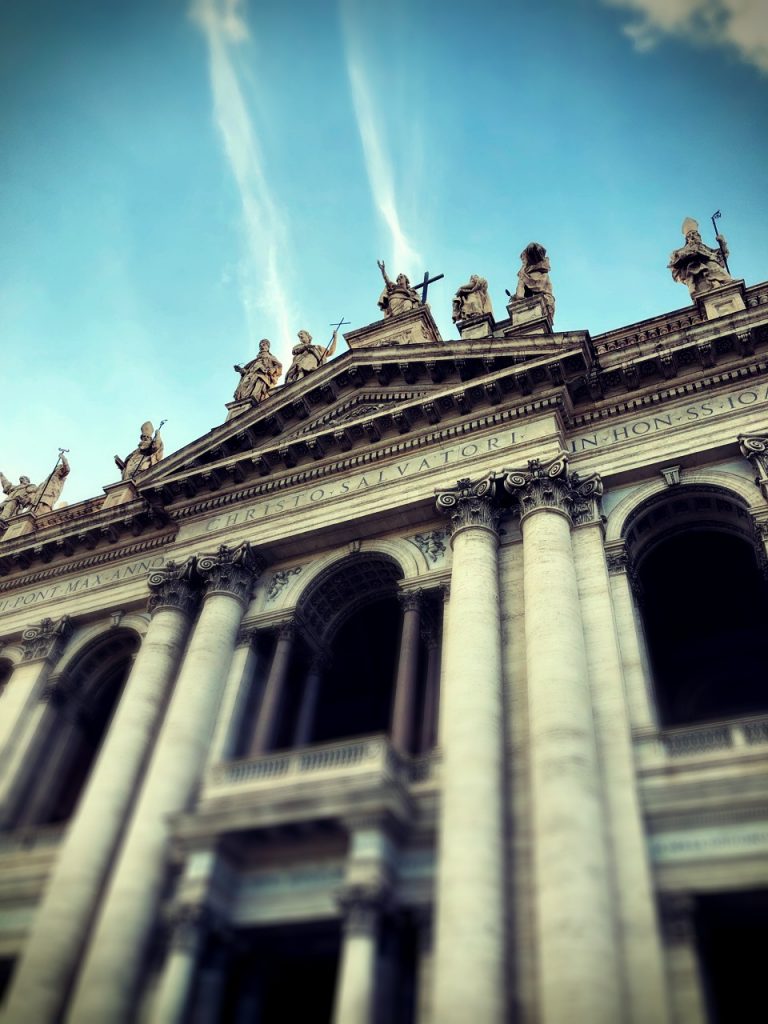 AFTER writing you last night, I managed only three hours of rest. Even the dark Roman night couldn’t fool my body. Jet lag wins again.

The first bit of news I read this morning left my jaw on the floor due to its timing. Last week, I wrote about Communism vs. Capitalism,[1]cf. The New Beast Rising and how the Church’s social doctrine is the answer to a proper economic vision for the nations that puts people before profit. So I was pretty excited to hear that, as I was landing in Rome yesterday, the Pope was preaching on this very subject, putting the Church’s social doctrine in the most accessible terms. Here is but one tidbit (the whole address can be read here and here):

If there is hunger on earth, it’s not because there is a lack of food! Rather, because of the demands of the market, sometimes it is destroyed; it’s thrown away. What is lacking is a free and farsighted entrepreneurship, which ensures adequate production, and solidary planning, which ensures an equitable distribution. The Catechism says again: “In his use of things man should regard the external goods he legitimately owns not merely as exclusive to himself but common to others also, in the sense that they can benefit others as well as himself” (n. 2404). All wealth, to be good, must have a social dimension… the true meaning and purpose of all wealth: it stands at the service of love, freedom and human dignity. —General Audience, November 7th, Zenit.org

After breakfast, I walked to St. Peter’s Square hoping to attend Mass and make a confession. The lineups into the basilica were huge though—crawling. I had to pull the plug as we had a tour of St. John Lateran (the “Pope’s church”) starting in a couple of hours, and I wouldn’t make that if I stayed.

So I took a walk along the shopping area near the Vatican. Thousands of tourists meandered past designer name stores as honking traffic whizzed by on crowded streets. Who says the Roman Empire is dead? It only has a facelift. Instead of armies, we have been conquered by consumerism.

Today’s first Mass reading: “I even consider everything as a loss because of the supreme good of knowing Christ Jesus my Lord.” How the Church needs to live these words of St. Paul. 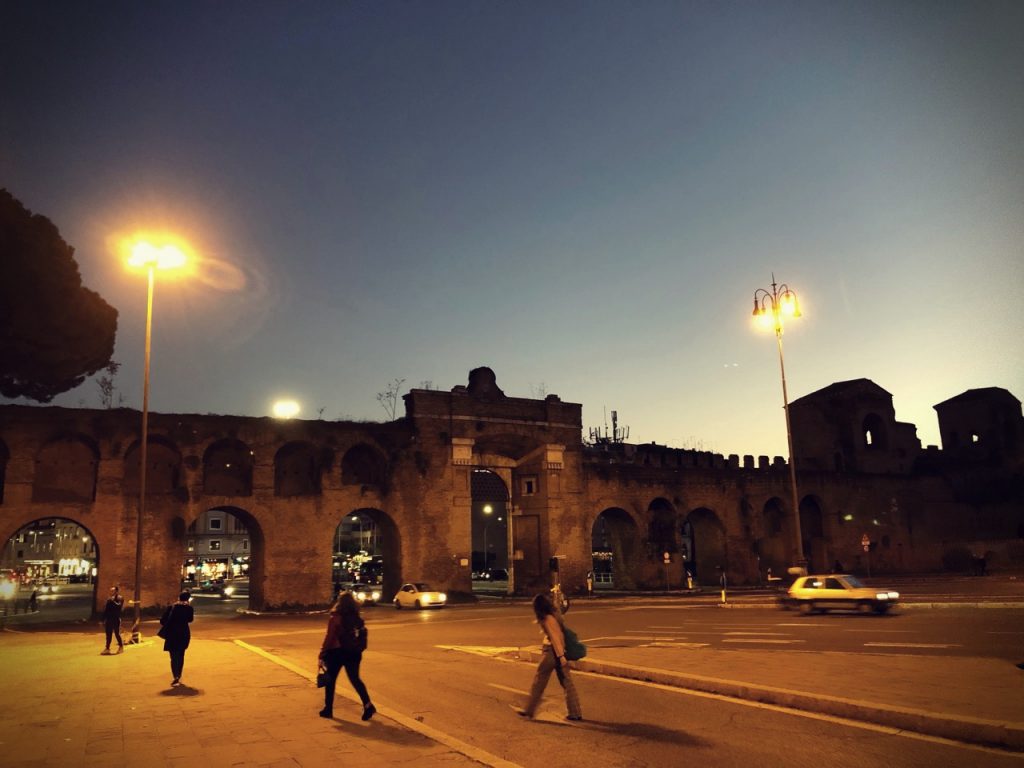 A small group of us who are attending the ecumenical conference this weekend piled into taxis and headed off to St.
John Lateran. Tonight is the vigil of the Feast of that basilica’s dedication. Only a couple of hundred yards away is the ancient wall and main archways that St. Paul passed through on foot 2000 years ago. I love Paul, my favorite biblical writer. To be standing on the ground that he walked is hard to process.

Inside the church, we passed by the reliquaries of St’s Peter and Paul where fragments of their skulls have been preserved for 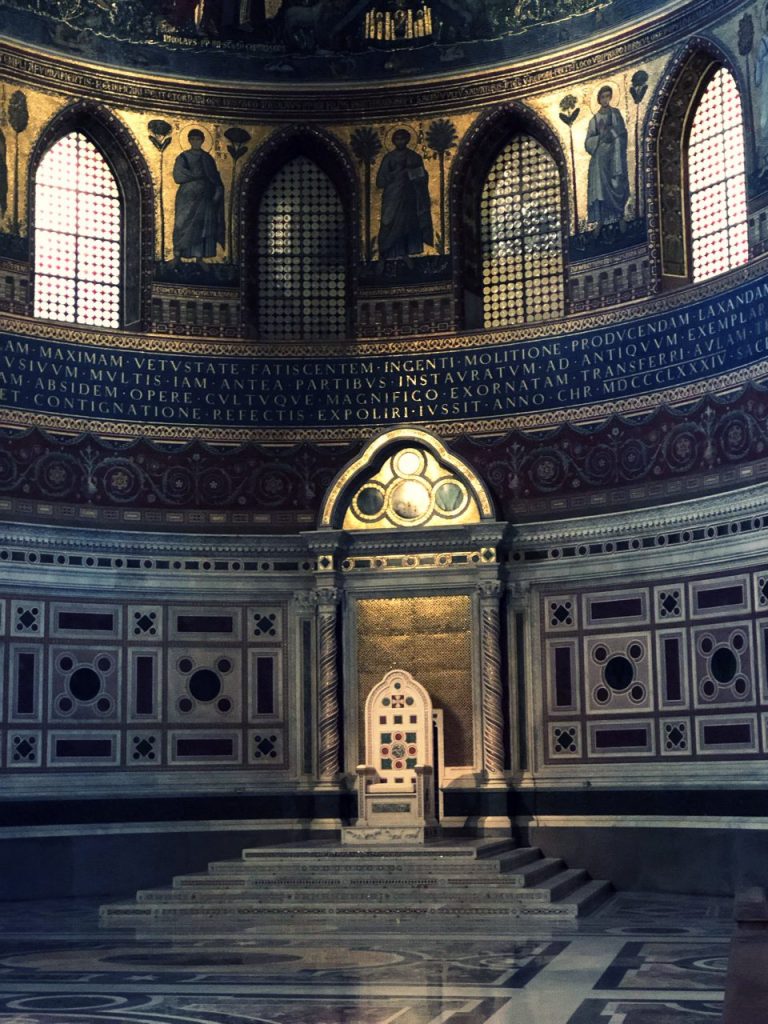 veneration. And then we came to the “chair of Peter”, the seat of authority of the Bishop of Rome who is also the chief shepherd over the Universal Church, the Pope. Here, I am reminded once again that The Papacy is not One Pope. The office of Peter, created by Christ, remains the rock of the Church. It will be so until the end of time.

Spent the rest of the evening with Catholic apologist, Tim Staples. Last time we saw each other, our hair was still brown. We talked about aging and how we have to always be prepared to meet the Lord, especially now that we’re in our fifties. How the words of St. Peter ring true the older one gets:

All flesh is like grass and all its glory like the flower of grass. The grass withers, and the flower falls, but the word of the Lord abides for ever. (1 Pet 1:24-25) 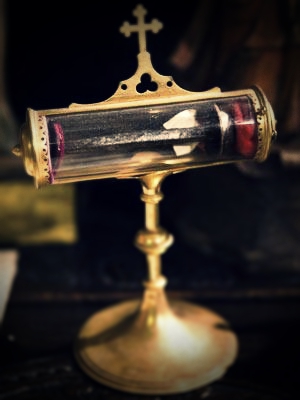 brought the relics of the Passion of Lord from the Holy Land. Two thorns from Christ’s crown, a nail that pierced Him, the wood of the Cross and even the placard that Pilate hung upon it, are preserved here. As we approached the relics, a sense of overwhelming gratitude came upon us. “Because of our sins,” Tim whispered. “Jesus have mercy,” I replied. The need to kneel overcame us. A few feet behind me, an elderly woman quietly wept.

Just this morning, I felt led to read the epistle of St. John:

In this is love, not that we loved God but that he loved us and sent his Son to be the expiation for our sins. (1 John 4:10)

Thank you Jesus for loving us, always.

Over supper, Tim and I talked a lot about Pope Francis. We shared the scars we both have from having defended the papacy against the very public and often inappropriate attacks upon the Vicar of Christ, and thus, upon the unity of the Church herself. It’s not that the Pope has not made mistakes—it is his office that is Divine, not the man himself. But it is precisely because of this that frequently rash and unfounded judgments against Francis are out of place, as much as undressing one’s own father in the public square would be as well. Tim referenced Pope Boniface VIII, who wrote in the fourteenth century:

Back at my hotel this evening, I read today’s homily at Santa Casta Marta. The Pope must have been anticipating my conversation with Tim:

Bearing witness has never been comfortable in history… for witnesses — they often pay with martyrdom… To witness is to break a habit, a way of being… to break, to change… what attracts is the testimony, not only the words…

Instead of “trying to resolve a situation of conflict, we murmur in secret, always in a low voice, because we don’t have the courage to speak clearly…” These murmurs are a “loophole for not looking at reality.” —General Audience, November 8th, 2018, Zenit.org

On judgment day, Christ will not ask me if the Pope was faithful—but if I was.