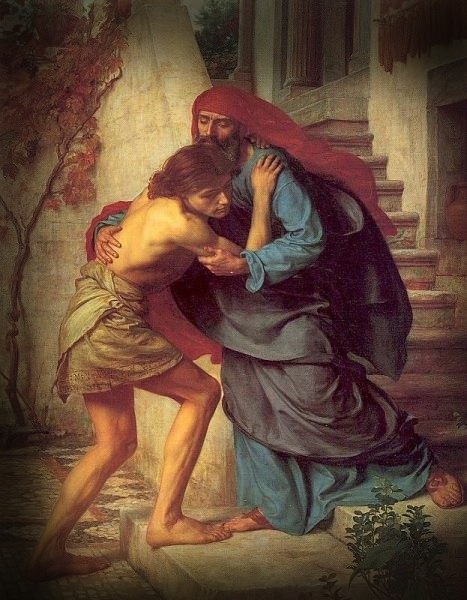 THERE is much on my heart to write and speak about in the days ahead that is serious and important in the big scheme of things. In the meantime, Pope Benedict continues to speak lucidly and candidly about the future the world faces. It is no surprise that he is echoing the warnings of the Blessed Virgin Mary who, in her person, is a prototype and mirror of the Church. That is, there should be a consistency between her and Sacred Tradition, between the prophetic word of the body of Christ and her authentic apparitions. The central and synchronous message is one of both warning and hope: warning that the world is on the very precipice of disaster due to its present course; and hope that, if we turn back to God, He can heal our nations. I want to write more about Pope Benedict’s powerful homily given this past Easter Vigil. But for now, we cannot underestimate the seriousness of his warning:

And thus, the world has arrived at The Prodigal Hour: a period of both hope and warning…

This morning in prayer, I sensed the Father say:

My child, brace your soul for the events which must take place. Do not be afraid, for fear is a sign of a weak faith and impure love. Rather, trust wholeheartedly in all that I will accomplish upon the face of the earth. Only then, in the “fullness of night,” will My people be able to recognize the light… —diary, March 15th, 2011; (cf. 1 John 4:18)

It is not that God wants us to suffer. He never created us for suffering. Through sin, mankind has brought suffering and death into the world… but through the Cross of Jesus, suffering can now be used as an instrument of purification and correction to bring about a greater good: salvation. When mercy fails to convince, justice will. 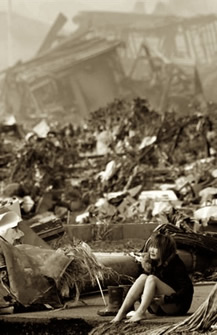 The tears flow readily when one begins to ponder the suffering taking place in Japan, New Zealand, Chile, Haiti, China, etc. where terrible earthquakes have struck. But then, as I minister to souls throughout the world in my travels and correspondence, there is another suffering taking place in nearly every region, but especially in Western cultures. It is the sorrows from a spiritual earthquake which began with the errant philosophies of the Enlightenment period —ultimately shaking faith in God’s existence—and that has swept like a moral tsunami through our times.

That first tsunami is now receding, leaving in its wake the carnage of a “culture of death,” where even the value of a human life is now openly debated, openly attacked, openly killed—and then such actions openly celebrated as a “right” by the truly deaf and blind prodigal sons and daughters of our times.

And so, The Prodigal Hour has come. For it is impossible for a humanity that has turned upon itself to survive. And thus, the environment, resources, freedoms, and peace of the nations are at stake. Could the Holy Father have been any clearer in his most recent encyclical letter?

…we must not underestimate the disturbing scenarios that threaten our future, or the powerful new instruments that the “culture of death” has at its disposal. To the tragic and widespread scourge of abortion we may well have to add in the future— indeed it is already surreptiously present — the systematic eugenic programming of births. At the other end of the spectrum, a pro-euthanasia mindset is making inroads as an 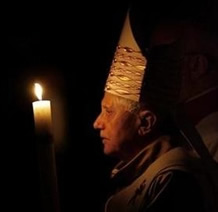 equally damaging assertion of control over life that under certain circumstances is deemed no longer worth living. Underlying these scenarios are cultural viewpoints that deny human dignity. These practices in turn foster a materialistic and mechanistic understanding of human life. Who could measure the negative effects of this kind of mentality for development? How can we be surprised by the indifference shown towards situations of human degradation, when such indifference extends even to our attitude towards what is and is not human? What is astonishing is the arbitrary and selective determination of what to put forward today as worthy of respect. Insignificant matters are considered shocking, yet unprecedented injustices seem to be widely tolerated. While the poor of the world continue knocking on the doors of the rich, the world of affluence runs the risk of no longer hearing those knocks, on account of a conscience that can no longer distinguish what is human. —POPE BENEDICT XVI, Caritas in Veritate “Charity in Truth”, n. 75

The shaking of nature, one could say, is the consequence of the shifting and separation between the spiritual and moral tectonic plates; for creation and morality are intrinsically tied to one another: [1]Rom 8:18-22

The deterioration of nature is in fact closely connected to the culture that shapes human coexistence: when “human ecology” is respected 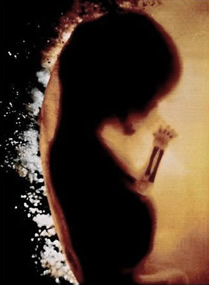 within society, environmental ecology also benefits. Just as human virtues are interrelated, such that the weakening of one places others at risk, so the ecological system is based on respect for a plan that affects both the health of society and its good relationship with nature… If there is a lack of respect for the right to life and to a natural death, if human conception, gestation and birth are made artificial, if human embryos are sacrificed to research, the conscience of society ends up losing the concept of human ecology and, along with it, that of environmental ecology… Herein lies a grave contradiction in our mentality and practice today: one which demeans the person, disrupts the environment and damages society. —POPE BENEDICT XVI, Ibid. n. 51

AN “ILLUMINATION” IS NEEDED

But what will it take for humanity to “wake up” from the perilous direction we are headed? Apparently, a lot more than what we’ve seen. We have blown our “inheritance”—that is, we have spent our free will on developing a world without God that has led to democracies without justice, economies without balance, entertainment without restraint, and pleasures without moderation. But even as we sit morally bankrupt (and the widespread destruction of marriages and families 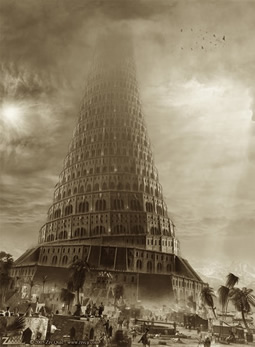 is evidence of this), it has not been enough to correct the consciences of humanity. No… it appears there must also come a “famine“ and then a great stripping and breaking of a pride [2]see The New Tower of Babel that has set itself against God our Father. Not until the nations are up to their knees in the pig slop of self-made destruction, it seems, will they be capable of receiving an illumination of conscience. And hence, the Seven Seals of Revelation must be definitively broken in order that the merciful justice of God—that is, letting us reap what we’ve sown [3]Gal 6:7-8—bring about an awareness of just how far we have fallen from grace.

And so, the night must fall; the darkness of this new paganism must take its course. And then, only then, it seems, will modern man be capable of distinguishing the “light of the world” from the “prince of darkness.”

BRACING THE SOUL… FOR GRACE

Ultimately, this is a message of hope: that God will not allow mankind to utterly destroy itself. He is going to intervene in a most sovereign and beautiful way. The coming Illumination of Conscience, perhaps what is called the “Sixth Seal” of Revelation, is going to be an opportunity for the prodigal sons and daughters to return home. Rather than descending upon the world in wrath, the Father will run to whomever will begin the journey home, and welcome them, no matter how grave or lost a sinner they have been. [4]cf. The Coming Revelation of the Father

While he was yet at a distance, his father saw him and had compassion, and ran and embraced him and kissed him. (Luke 15:20)

Wherever I minister, I constantly encounter parents whose children have left the Church. They are broken-hearted and afraid that their children will be lost for eternity. This, I’m sure, is the case for many of you who are reading this now. But listen carefully…

When the LORD saw how great was man’s wickedness on earth, and how no desire that his heart conceived was ever anything but evil, he regretted that he had made man on the earth, and his heart was grieved. So the LORD said: “I will wipe out from the earth the men whom I have created… I am sorry that I made them.” But Noah found favor with the LORD. (Gen 6:5-8)

Noah was the only righteous soul God could find—but He saved Noah and his family. [5]see also The Coming Restoration of the Family

Go into the ark, you and all your household, for you alone in this age have I found to be truly just. (Gen 7:1)

So, those of you whose children, siblings, spouses, etc. have fallen away from the faith: be like Noah. You be the righteous one, living in fidelity to God’s Word and interceding and praying on their behalf, and I believe God will grant them the opportunity and the graces to—like the prodigal son—come home, [6]see The Coming Restoration of the Family before the last half of the Great Storm passes over humanity: [7]see The Prodigal Hour

I shall get up and go to my father and I shall say to him, “Father, I have sinned against heaven and against you I no longer deserve to be called your son; treat me as you would treat one of your hired workers. (Luke 15:18-19)

But this Prodigal Hour is not the beginning of a new Era of Peace—not yet. For we also read in the parable of the Prodigal that the elder son was not open to the Father’s mercy. So too, many will also refuse the grace of the Illumination which will thus serve to either draw souls into God’s mercy, or leave them in the darkness. The sheep will be sifted from the goats, the wheat from the chaff. [8]cf. The Great Purification Thus, the stage will be set for “the final confrontation” between the powers of Light and the powers of darkness. [9]cf. Living the Book of Revelation  It is this encroaching darkness which Pope Benedict has been warning our generation about in his prophetic teachings.

Thanks for helping to keep this ministry afloat!