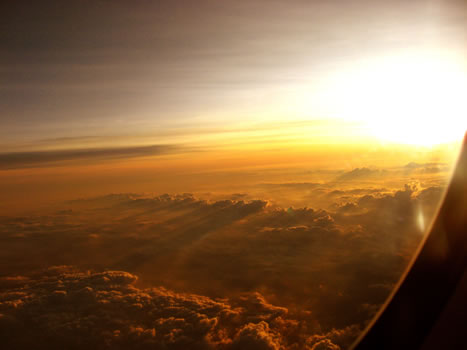 THIS morning, on the first leg of my flight to California where I’ll be speaking this week (see Mark in California), I peered out the window of our jet at the ground far below. I was just finishing the first decade of the Sorrowful Mysteries when an overwhelming sense of futility came over me. “I am just a mere speck of dust on the face of the earth… one of 6 billion people. What difference could I possibly make??….”

Then I suddenly realized: Jesus also became one of us “specks.” He too became just one of the millions who lived on earth at that time. He was unknown to most of the population of the world, and even in His own country, many did not see or hear Him preach. But Jesus accomplished the Father’s will according to the Father’s designs, and in so doing, the impact of Jesus’ life and death has an eternal consequence that extends to the very ends of the cosmos.

As I looked down at the dry prairies beneath me, I felt that many of you may also be going through a similar temptation. In fact, I’m certain a vast majority of the Church is going through what I call the “useless” temptation. It sounds a bit like this: “I am just too insignificant, too ungifted, too little to make a difference in the world.” As I thumbed my tiny Rosary beads, I sensed that Jesus underwent this temptation too. That one of the deepest sorrows of Our Lord was the knowledge that His Passion and Death would be greeted in generations to come, especially ours, with great apathy—and that Satan mocked Him for this: “Who really cares about Your suffering? What is the use? People reject You now, and they will then… why bother going through all this?”

Yes, Satan whispers these falsehoods even now in our ears… what’s the use? Why go through all these efforts to spread the Gospel when so few want to hear it, and even fewer respond?  You are making little difference. Hardly anyone is paying attention. What’s the use when so few care? Your efforts, sadly, are so useless….

The truth is, most of us will die and soon be forgotten. We will have impacted only a circle of a few or perhaps more. But most of the earth’s population will not even realize that we lived. As St. Peter writes:

All mankind is grass and the glory of men is like the flower of the field. The grass withers, the flower wilts, but the word of the Lord endures forever. (1 Pet 1:24)

Here now is another truth: that which is also done according to the word of the Lord has an enduring impact. This is particularly true when one is a member of Christ’s mystical body, and thus you participate in the eternal and universal act of Redemption when you live and move and have your being in Him—when you are united to His holy will. You may think that the cup of coffee you give up for souls is a small thing, but in reality, it has eternal repercussions that, frankly, you will not fathom until you enter eternity. The reason is not because your sacrifice is so great, but because it is joined to the Great and Eternal Act of Christ, and thus, it takes on the power of His Cross and Resurrection. A pebble may be tiny, but when it is cast into the water, it causes ripples across the 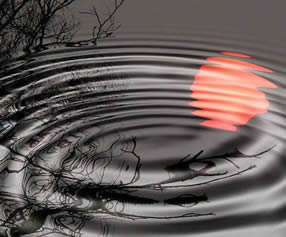 entire pond. So too, when we are obedient to the Father—whether it is doing the dishes, rejecting a temptation, or sharing the Gospel—that act is cast by His hand into the great ocean of His merciful love, causing ripples throughout the universe. Because we may not fully understand this mystery does not negate it’s reality and power. Rather, we should enter with faith upon each moment with the same “Fiat” of Our Blessed Mother who often did not understand God’s ways, but pondered them in her heart: “May it be done to me according to your Word.” Ah! So simple a “yes”— so great a Fruit! With each “yes” you give, my beloved friends, the Word takes on flesh once again through you, a member of His mystical body. And the spiritual realm reverberates with God’s eternal love.

One more proof that even your smallest acts have value—whether seen or unseen—is that, because God is love, when you act in love, it is the eternal God working through you to one degree or another. And nothing He does is “lost.” As St. Paul reminds us,

The greater and more pure your love in the Fiat of the moment, the greater the repercussions of your act throughout eternity. In that regard, the act itself is not so important as the love with which it is done.

Yes, love is never lost; it is never a little thing. But in order for our works of love to become pure fruit of the Spirit, they must be born of the mystical mother of humility. Too often, our “good works” are motivated by ambition. Indeed, we genuinely want to do good, but secretly, perhaps even imperceptibly in the heart, we want to be known for our good works. Thus, when we are not met with the reception we desire, when the results aren’t what we expect, we buy into the “useless temptation” because, “…after all, people are just too stubborn and proud and ungrateful and don’t deserve all these good efforts, and all the money, resources, and time wasted, etc….”

But that is a heart motivated by self-love instead of a love that gives to the end. It is a heart more concerned with results than obedience.

I remember working directly under a Canadian bishop during the Year of the Jubilee. I had great expectations that the time was ripe for the Gospel and that we would reap a harvest of souls. Instead, we could barely scale the double-lined wall of apathy and complacency that greeted us. After merely 8 months, we packed our bags and headed homeward with our four children, a fifth on the way, and nowhere to go. So we piled into a couple bedrooms in my inlaw’s farmhouse and stuffed our belongings in the garage. I was broke… and broken. I took my guitar, laid it in the case, and whispered out loud: “Lord, I’ll never pick this thing up again for ministry… unless you want me to.” And that was that. I began to look for a secular job…

Digging through boxes one day only to find our belongings covered in mice droppings, I wondered aloud why God had seemingly abandoned us. “After all, I was doing this for You, Lord.” Or was I? Then the words of Mother Teresa came to me: “God has not called me to be successful; He has called me to be faithful.” That’s difficult wisdom to abide by in our results-driven Western culture! But those words “stuck,” and they remain more relevant to me than ever. What matters is that I am obedient out of a heart of love… and the results might be utter failure. I often think of St. John de Brebeuf who came to Canada to evangelize the Indians. In return, they skinned him alive. How’s that for results? And yet, he is honored to this day as one of the great martyrs of modern times. His faithfulness inspires me, and I’m sure many, many others.

Eventually God did call me back into ministry, but now it was on His terms and in His way. I was terrified by then to do anything for Him, since I had been so presumptuous in the past. Like Mary, I’m sure the angels had to whisper to me a thousand times: “Do not be afraid!” Indeed, like Abraham, I had to lay down my plans, my ambitions, my hopes and my dreams upon the altar of God’s will. Of course, I thought that was the end. But, when the moment was right, God provided a “ram” for me in the brambles. That is, He wanted me now to take up His plans, His ambitions, His hopes and His dreams, and they would be expressed to me in the way of the Cross that is His Holy Will.

And so, we must be little like Mary. We must “do everything He tells you” with humility and love. I have received several letters in the past 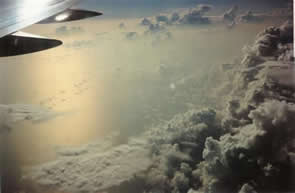 few days from parents and spouses who don’t know what to do with family members who have abandoned the faith. They feel helpless. The answer is to keep loving them, praying for them, and don’t give up.You are planting seeds and dropping pebbles in the pond of God’s will with ripple effects that you most likely will not feel or perceive. That is the time to walk by faith and not by sight. Then you are truly living out the spiritual priesthood of Jesus as you love and obey like Him, “even unto death.”

That is, you are leaving the results to Him which, I assure you, are anything but “useless.”

Come to him, a living stone, rejected by men but approved, nonetheless, and precious in God’s eyes. You too are living stones, built as an edifice of spirit, into a holy priesthood, offering spiritual sacrifices acceptable to God through Jesus Christ… I urge you therefore, brothers, by the mercies of God, to offer your bodies as a living sacrifice, holy and pleasing to God, your spiritual worship. (1 Pet 2:4-5; Rom 12:1)