THE NOW WORD ON MASS READINGS
for February 11th, 2014
Opt. Mem. of Our Lady of Lourdes 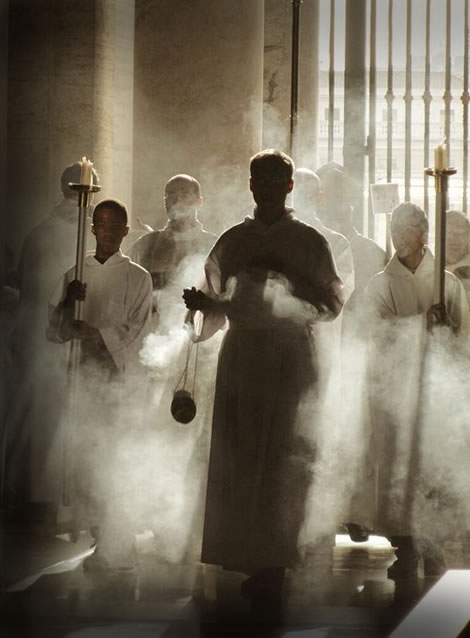 EVERY morning, it’s the same ritual for millions of people: have a shower, get dressed, pour a cup of coffee, eat breakfast, brush teeth, etc. When they come home, it’s often another rhythm: open the mail, change out of work clothes, start supper, etc. Furthermore, human life is marked by other “traditions”, whether it is setting up a Christmas tree, baking a turkey at Thanksgiving, painting one’s face for game-day, or placing a candle in the window. Ritualism, whether it’s pagan or religious, seems to mark the life of human activity in every culture, whether it is that of neighbourhood families, or that of the ecclesial family of the Church. Why? Because symbols are a language unto themselves; they carry a word, a meaning that conveys something deeper, whether it is love, danger, memory, or mystery.

That is why it is often surprising to hear fundamentalists at times condemn Catholics, claiming that our worship is “empty rituals” and “human traditions” that Jesus Himself condemned. But did He?

You disregard God’s commandment but cling to human tradition… How well you have set aside the commandment of God in order to uphold your tradition!

A more careful examination of Christ’s words indicate that He was not condemning human tradition, but those who place human traditions, laws, or demands before God’s will expressed in the commandments. In that sense, it is true: those who think that it is simply enough to show up at Mass every Sunday, light some candles, ring some bells… but then live like they want from Monday to Saturday ignoring God and neighbour—they too are putting rituals before relationship, customs before commandments. For, “faith of itself, if it does not have works, is dead.” [1]cf. Jam 2:17 Likewise, those who treat devotions and rituals like a cosmic vending machine (if I do this, I get this) forget that it is “by grace you have been saved through faith, and this is not from you; it is the gift of God.” [2]cf. Eph 2:8

You nullify the word of God in favor of your tradition that you have handed on.

But that does not mean that the rich symbolism and rituals in and of themselves are therefore wrong. The Church is first and foremost a family—a family whose forefathers were the Jews. It is from them that liturgical symbols were drawn, from the incense, to candles, to vestments, to the very use of a building as a place of gathering. These are the family traditions. Jesus said,

Christianity draws its ancient richness from the Old Testament; it does not abolish it. Suddenly, the symbols in the Torah take on a new meaning. Jesus becomes the “lamb” who takes away the sins of the people; His is the blood symbolized in the sacrifice of Moses; the Temple becomes the body of Christ, both His earthly and mystical body; the menorah symbolizes the “light of the world” set upon a lampstand in the New Testament; the manna in the desert is a precursor to the Bread of Life, etc. The early Church did not do away with these symbols but discovered their new meaning. Thus, sacred symbols and traditions became a way of pointing to the transcendent, to the mystery of Emmanuel— “God with us.”

This is how we are to understand the sacred symbols, art, and architecture of the Church. It is the same expression of wonder at the splendor of God that Solomon also felt as in today’s first reading when he had built the temple:

Can it indeed be that God dwells on earth? If the heavens and the highest heavens cannot contain you, how much less this temple which I have built!

How much greater then is our desire to express creatively through symbols that God still dwells with us! I remember a little community in former Yugoslavia that I visited several years ago. There were several refugee families living in shacks with tin walls and torn curtains for window coverings. [3]cf. How Cold Is It in Your House? They were so poor! And yet, in agreement with the parish priest, they all insisted that a little church be built. It was a beautiful expression of both their love for God and God’s love for them. At first, one is a bit taken aback at the marble floors, beautiful art, and ornate Tabernacle wondering if that wouldn’t have been money better spent on housing. But their hearts were beating in time with Solomon’s: Can it indeed be that God dwells on earth?

Last, we cannot forget that it was Christ Himself who instituted many traditions: “Do this in memory of Me”, He said at the Last Supper. “Go therefore and baptize”, He said, which included the baptismal ritual that He himself participated in. He drew symbols in the ground as the adulteress was about to be stoned (written words); He mixed spittle into clay to put upon the eyes of a blind man (sacramentals); He washed the Apostle’s feet (rituals); He consecrated both bread and wine (sacraments); and He used symbolism constantly in the parables He told each day (liturgy of the word). Jesus was the master of creating traditions! Is not the Incarnation the most powerful symbol of them all?

Yes, the Incarnation becomes the reference point for all our traditions. God entered into time; He entered into the warp and woof of human life. He therefore raises up in His divine nature all that is human; all that we do in truth, beauty, and goodness becomes itself incense rising to the Heavenly Father.

No, not only did Jesus not condemn traditions, but those Traditions pertaining to faith and morals He commanded us to follow.

I praise you because you remember me in everything and hold fast to the traditions, just as I handed them on to you. (1 Cor 11:2)

So then, brothers, stand firm and hold to the traditions that you were taught by us, either by our spoken word or by our letter. (2 Thess 2:15)

Let us note that the very tradition, teaching, and faith of the Catholic Church from the beginning, which the Lord gave, was preached by the Apostles, and was preserved by the Fathers. On this was the Church founded; and if anyone departs from this, he neither is nor any longer ought to be called a Christian… —St. Athanasius (360 AD), Four Letters to Serapion of Thmius 1, 28

Spiritual Food for Thought is a full-time apostolate.
Your support is much needed! Thank you.