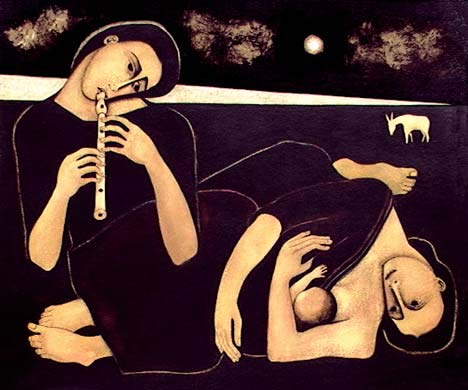 Joseph, Mary, and the Christ Child camp in the desert at night as they flee to Egypt.
The stark surroundings accentuate their plight,
the danger they are in, the darkness of the world.
As the mother nurses her child, the father stands watch and plays gently on a flute,
the music soothing the Child to sleep.
Their entire life is founded on mutual trust, love, sacrifice,
and abandonment to divine providence.  —Artist’s notes

WE can now see it coming into view: the edge of the Great Storm. Over the past seven years, the image of a hurricane is what the Lord has used to teach me about what is coming upon the world. The first half of the Storm are the “labor pains” that Jesus spoke of in Matthew and what St. John describes in more detail in Revelation 6:3-17:

You will hear of wars and reports of wars; see that you are not alarmed, for these things must happen, but it will not yet be the end. Nation will rise against nation, and kingdom against kingdom; there will be famines and earthquakes from place to place. All these are the beginning of the labor pains… (Matt 24:6-8)

In Revelation, there is a chronology that St. John witnesses in a vision which begins with global violence, impacted economies, plagues, famine, persecution… etc. It begins, again, with the dissolution of global peace: 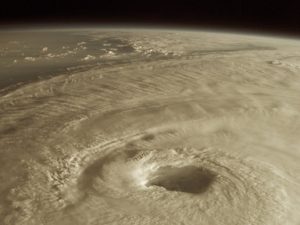 When he broke open the second seal… Another horse came out, a red one. Its rider was given power to take peace away from the earth, so that people would slaughter one another. And he was given a huge sword. (Rev 6:3-4)

As the nations continue to converge upon the Middle East with their armies and navies, it is reasonable to wonder if we are not quickly approaching the definitive opening of the Second Seal. With global economies so fragile, any kind of disruption could send currencies into a tailspin—which is inevitable regardless due to the massive debt incurred, particularly by Western nations. What I feel compelled to write for certain is that there is so little time left, and that we are to prepare for great changes that will affect every aspect of our lives. We may in fact be weeks away from major events… that, according to analysts of many colors, economic, political, and yes, mystical. Once the Great Storm hits, changes in the world will be swift, irreversible, and will conclude with the Triumph of the Two Hearts. [1]cf. The Seven Seals of Revolution How long this Storm lasts, only Heaven knows. Most certainly, our prayers play a major role in delaying, mitigating, or perhaps in some regions, even cancelling certain chastisements that are now coming. May the following words, written on May 25th, 2007, be of comfort and sttrength for your soul…

As I drove into the sunset last night, I sensed the Lord saying,

I will be your refuge.

I sense His deep love and concern for us… that we do not cave into fear as we watch the world continue its exponential plunge into lawlessness.

I have made provisions for you!

Great change is coming, but for those who trust in Him, we needn’t be afraid at all. Think of the Apostles before Pentecost. They were in the upper-room, shaking in fear of the authorities. But after Pentecost, they were so filled with courage that they faced their persecutors, converting many to Christ. And when they were scourged for their faith in Him, they found it an occasion, not for running in fear, but for rejoicing in the Lord.

Make no mistake: this rejoicing did not well up from emotional hype, but from within. It was supernatural.

The strength they received from the Spirit enabled them to hold firmly to the love of Christ, facing the violence of their persecutors unafraid.  —St. Cyril of Alexandria, Liturgy of the Hours, Vol II, p. 990

God did not give us a spirit of cowardice but rather of power and love and self-control. (2 Tim 1:7)

I believe that with the Eye of the Storm, there will come a tremendous outpouring of the Holy Spirit. There will be an infusion of power and love and self control, of holy confidence and courage. For those who receive this Gift, they will be like a rock in the face of a hurricane. The Great Trials of suffering and the winds of persecution will beat against them, but will not penetrate the Light and Strength of Christ living within their hearts through the power of the Holy Spirit.

And Mary, Spouse of the Holy Spirit, will be nearby, her mantle stretched over her children like an Eagle’s wing over her brood.

I am thinking tonight of the story of Hiroshima, Japan, and the eight Jesuit priests who survived the atomic bomb dropped in their city… only 8 blocks from their home. Half a million people were annihilated around them, but the priests all survived. Even the nearby church was completely destroyed, but the house they were in was minimally damaged.

We believe that we survived because we were living the message of Fatima.  We lived and prayed the Rosary daily in that home. —Fr. Hubert Schiffer, one of the survivors who lived another 33 years in good health with not even any side-effects from radiation;  www.holysouls.com

Yes, the priests were living in the Ark of the New Covenant.

Then there is the story of Anne Caron who was walking alone one night in a long dark tunnel. A man approached her from the opposite end holding a cane in his hand—but not to help him walk; he was just carrying it.

Fear sliced through me, I wanted to drop everything and turn around and run, but almost immediately I seemed to see Mary taking my hand, bags and all, and we just kept walking. We walked right by the man, and he appeared to not even see me. I learned later that my mother couldn’t sleep that night and sat in her rocking chair praying her rosary, especially for me. —101 Inspirational Stories of the Rosary, Sister Patricia Proctor, OSC. p.73

And I think of a dear friend of mine who was studying to become a priest. He was driving his car home, praying the Rosary, when he fell asleep at the wheel. His vehicle clipped a large truck sending his car hurtling across the highway. The impact of the accident left him paralyzed from the chest down… and unable to continue his seminarian training.

Why do I include this story? Because my friend is now offering his present suffering for the salvation of an untold number of souls he will never meet in this life. Despite the continued pain in his lower back, and how it tries his perseverance at times, he has not become bitter nor has he abandoned the Lord. He lives in the present moment, trusting in God that he is exactly where he should be… (Note: this young man has since passed away. I had the honor of singing at his funeral, an occasion of both joy and sorrow since his life was such an inspiration.)

Jesus gives his Mother to be a refuge, an Ark of Safety. But it is not always to protect the body—which is passing away in this life anyway—but to protect above all the soul. Those, then, who are called to live through the Great Trials, will have the graces to persevere in courage and to be protected from—or to confront in the “power and love and self control” of the Holy Spirit—their persecutors.

Which is why now is the time to hold this Mother’s hand—she who is the Spouse of the Holy Spirit. That is, pray the Rosary daily, which is to contemplate and come to know and love Jesus personally. It is to be wrapped in a special mantle of protection granted through God’s providence. It is to be safe in the refuge of her heart… which rests safely in the refuge of her Son, Jesus Christ, Savior of the world.

Let them implore also the powerful intercession of the Immaculate Virgin who, having crushed the head of the serpent of old, remains the sure protectress and invincible “Help of Christians.” —POPE PIUS XI, Divini Redemptoris, n. 59