THE NOW WORD ON MASS READINGS
for April 9th, 2014
Wednesday of the Fifth Week of Lent 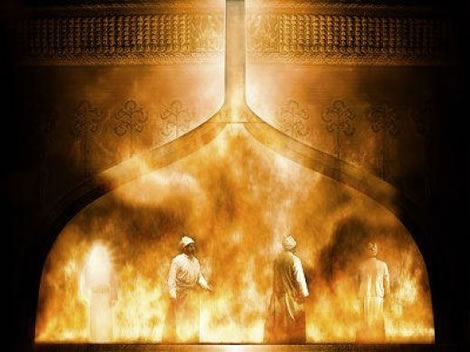 NOT negotiable. That was essentially the reply of Shadrach, Meshach, and Abednego when King Nebuchadnezzar threatened them with death if they did not worship the state god. Our God “can save us”, they said,

But even if he will not, know, O king, that we will not serve your god or worship the golden statue that you set up. (First reading)

Today, believers are once again being forced to bow before the state god, these days under the names of “tolerance” and “diversity.” Those who don’t are being harassed, fined, or forced from their careers.

Not that Christians don’t believe in tolerance and diversity. But for the believer, tolerance does not mean accepting as a “right” immoral behavior, but rather being patient with another’s weakness, blessing those who curse us, and praying for those who do us harm. Diversity to the Christian means celebrating the true differences in gender, culture, and giftedness—not forcing everyone into homologous thinking and colorless uniformity. Indeed, Pope Francis lamented the ‘worldliness’ of those who are engineering the cultural future into only one way of thought.

It is not the beautiful globalization of unity of all Nations, each one with their own customs, instead it is the globalization of hegemonic uniformity, it is the single thought. And this sole thought is the fruit of worldliness. —POPE FRANCIS, Homily, November 18th, 2013; Zenit

The “thought police” today are not only re-writing or ignoring history but redefining the very genesis of mankind, the family, and our anthropological roots. This was especially evident when the European Union deliberately left out any mention of Christianity in its constitution, leading Benedict XVI to say:

It has become fashionable to be amnesiac and to deny historical proofs. To say that Europe has no Christian roots is equivalent to claiming that a human being can live without oxygen and food. —BENEDICT XVI, Address to new ambassador of Croatia, April 11th, 2011, vatican.ca

When you deprive a human of oxygen or food, it can eventually cause brain damage. That is analogous of the “eclipse of reason” in our times that seeks to overturn the natural law—and coercively persuade everyone that it is perfectly rational. But Jesus’ answer to the rationalists of His time was quite simple:

If you remain in my word, you will truly be my disciples, and you will know the truth, and the truth will set you free.

That is, proof of the “truth” of His word would be in a lived experience of freedom that would impact not only the individual soul, but entire cultures. On the other hand, He said…

…everyone who commits sin is a slave of sin. (Today’s Gospel)

That is, sin, by its very nature would seek to dominate and control. Indeed, history has always shown that whenever there is a vacuum of truth, not only is it filled with lies, but when sin becomes institutionalized and socially systemic, it leads to one form or another of totalitarianism.

…democracy is only as good as the moral character of its people. —Michael D. O’Brien, The New Totalitarianism, “hate crime,” and same-sex “marriage”, June, 2005, www.studiobrien.com

Shadrach, Meshach, and Abednego knew this, which is why they would never submit to the state god, even at the cost of their lives: they refused to become a slave to that which they knew to be a lie. So when the king saw one who looked like a “son of man” walking in the furnace with them, it is not that God was suddenly walking with them… they had been walking with the Truth all along.

…blessed is your holy and glorious name, praiseworthy and exalted above all for all ages. (From the canticle of the three men in the furnace, from today’s Psalm)