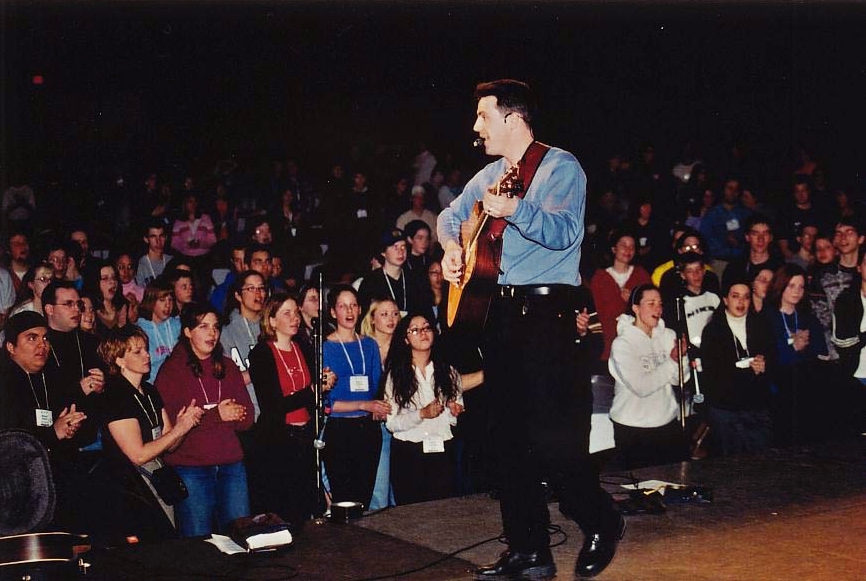 AT the same time that the Lord was setting my heart on fire again for His Church, another man was calling us youth into a “new evangelization.” Pope John Paul II made this a central theme of his pontificate, boldly stating that a “re-evangelization” of once Christian nations was now necessary. “Whole countries and nations where religion and the Christian life were formerly flourishing,” he said, were now, “lived ‘as if God did not exist’.”[1]Christifideles Laici, n. 34; vatican.va

Indeed, everywhere I looked in my own country of Canada, I saw nothing but complacency, secularism, and even a growing apostasy. While what missionaries we had were leaving for Africa, the Caribbean and South America, I saw my own city as missionary territory again. So, as I was learning the deeper truths of my Catholic faith, I also felt the Lord calling me to enter His vineyards—to respond to The Great Vacuum that was sucking my generation into spiritual slavery. And He was speaking most succinctly through His Vicar, John Paul II:

At this moment the lay faithful, in virtue of their participation in the prophetic mission of Christ, are fully part of this work of the Church. —POPE ST. JOHN PAUL II, Christifideles Laici, n. 34; vatican.va

The Pope would also say:

Look to the future with commitment to a New Evangelization, one that is new in its ardor, new in its methods, and new in its expression. — address to the Episcopal Conferences of Latin America, March 9th, 1983; Haiti

MUSIC IS A DOORWAY…

One day, I was discussing with my sister-in-law the crisis of faith and the mass exodus of youth from the Catholic Church. I told her how moving I thought that Baptist music ministry was (see Stay, and Be Light). “Well then, why don’t you start a praise and worship band?” Her words were thunder, a confirmation of the little storm brewing in my heart that wanted to bring refreshing showers to my brothers and sisters. And with that, I heard from within a second pivotal word that came shortly thereafter:

Music is a doorway to evangelize.

This would become the “new method” that the Lord would have me use to “Stay, and be light to my brothers.” It would be using praise and worship music, “new in its expression”, to draw others into God’s presence where He could heal them.

The problem is that I wrote love songs and ballads—not worship songs. For all the beauty of our ancient hymns and chants, the treasury of music in the Catholic Church was short on that new expression of praise and worship music that we were seeing among the Evangelicals. Here, I am not speaking of Kumbaya, but worship songs from the heart, often drawn from Scripture itself. We read in both the Psalms and in Revelation how God wants a “new song” sung before Him.

Even John Paul II invited some Pentecostals to bring this “new song” of the Spirit to the Vatican. [2]cf. The Power of Praise, Terry Law So, we borrowed their music, much of it sublime, personal, and deeply moving.

One of the first youth events my budding ministry helped organize was a “Life in the Spirit Seminar” in Leduc, Alberta, Canada. About 80 youth gathered where we would sing, preach the Gospel, and pray for a new outpouring of the Holy Spirit upon them like a “new Pentecost”… something John Paul II felt was intrinsically tied to the New Evangelization. At the end of our second evening of the retreat, we witnessed many young people, once timid and afraid, suddenly filled with the Spirit and overflowing with light, praise, and the joy of the Lord.

One of the leaders asked if I too wanted to be prayed over. My parents had done this already with my siblings and I many years before. But knowing that God can pour His Spirit upon us over and over again (cf. Acts 4:31), I said, “Sure. Why not.” As the leader stretched forth his hands, I suddenly fell over like a feather — something which had never happened to me before (called “resting in the Spirit”). Unexpectedly, my body was cruciform, my feet crossed, hands outstretched as what felt like “electricity” coursed through my body. After a few minutes, I stood up. My fingertips were tingling and my lips were numb. Only later would it become clear what this meant….

But here’s the thing. From that day on, I began to write praise and worship songs by the dozen, sometimes two or three in an hour. It was crazy. It was like I couldn’t stop the river of song flowing from within.

ONE VOICE IS BORN

With that, I began to piece together a formal band. It was a delightful privilege—perhaps a window into how Jesus chose His Twelve Apostles. Suddenly, the Lord would put men and women before me of whom He would simply say in my heart: “Yes, this one too.” In hindsight, I can see that several, if not all of us were chosen, not so much for our musical abilities or even faithfulness, but because Jesus simply wanted to make disciples of us.

Knowing the spiritual drought of community that I was experiencing in my own parish, the first order of the day was that we would not only sing together, but pray and play together. Christ was forming not only a band, but a community… a family of believers. For five years, we grew to love one another such that our love became the “sacrament” through which Jesus would draw others to our ministry.

By the mid-1990’s, our band, One Voice, was drawing several hundred people on Sunday evenings to our event called “An Encounter With Jesus.” We would simply lead people into God’s presence through music, and then share the Gospel with them. We would close the evening with songs helping people to surrender their hearts more and more to Jesus so He could heal them.

AN ENCOUNTER WITH JESUS

But even before the formal part of the evening began, our ministry team would pray before the Blessed Sacrament in a side chapel, singing and worshiping Jesus in His Real Presence. Ironically, one young Baptist man began to attend our events. He eventually became a Catholic and entered the seminary.[3]Murray Chupka had an extraordinary love for Jesus, and the Lord for him. Murray’s passion for Christ left an indelible mark on all of us. But his journey into the priesthood was cut short. One day while driving home, Murray was praying the Rosary and fell asleep at the wheel. He clipped a semi-truck and became paralyzed from the waist down. Murray spent the next several years confined to a wheelchair as a victim soul for Christ until the Lord called him home. Myself and some members of One Voice sang at his funeral.  He later told me that it was how we prayed and worshipped Jesus before our event that initiated his journey into the Catholic Church.

We became one of the first bands in Canada to lead a group of people in worship before the Blessed Sacrament with praise and worship, something almost unheard of back in the 90’s.[4]We learned this “way” of Adoration through the Franciscan Friars of New York, who came to Canada to give a “Youth 2000” event in preparation for the Jubilee. One Voice was the ministry music that weekend. In the early years, though, we would place a picture of Jesus in the center of the sanctuary…a kind of precursor to  Eucharistic Adoration. It was a hint of where the ministry God gave me was headed. In fact, as I wrote in Stay, and Be Light, it was that Baptist praise and worship group my wife and I saw that really inspired the possibility of this kind of devotion.

Five years after our band was born, I received an unexpected phone call.

“Hi there. I’m one of the assistant pastors from the Baptist assembly. We were wondering if One Voice could lead our next praise and worship service… “

Oh, a full circle we had come!

And how I wanted to. But sadly, I replied, “We would love to come. However, our band is going through some big changes, so I’ll have to say no for now.” In truth, the season of One Voice was coming to a painful end…

Our appeal for support continues this week. Approximately 1-2% of our readership has made a donation, and we are so grateful for your support. If this full-time ministry is a blessing to you, and you are able, please click the Donate button below and help me to continue to “Stay, and be light“ to my brothers and sisters all over the world…

Today, my public ministry continues to lead people in an “Encounter With Jesus”. One stormy night in New Hampshire, I gave a parish mission. Only eleven people turned out because of the snow. We decided to begin rather than end the evening in Adoration. I sat there and quietly began playing guitar. At that moment, I sensed the Lord say, “There is someone here who does not believe in My Eucharistic presence.” Suddenly, He put words to the song I was playing. I was literally writing a song on the fly as He gave me sentence after sentence. The words of the chorus were:

You are the Grain of Wheat, for us your lambs to eat.
Jesus, here You are.

In the disguise of bread, it’s just as You said.
Jesus, here You are.

This is that song…

“Never stop what you are doing for the Lord. You have been and remain a true light in this dark and chaotic world.” —R.S.

“Your writings are a constant reflection for me and I frequently repeat your works, and even print out your blogs for the men in prison that I visit every Monday.” —J.L.

“In this culture in which we live, where God is being “thrown under the bus” at every turn, it is so important to keep a voice like yours heard.” —Deacon A.

A collection of Mark’s praise and worship music: 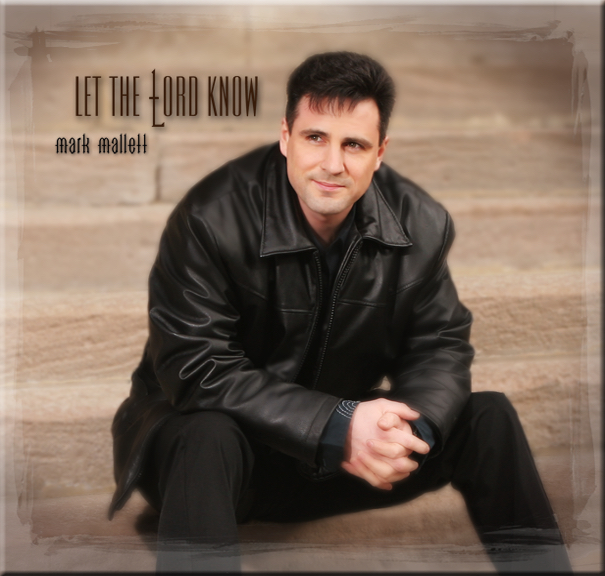