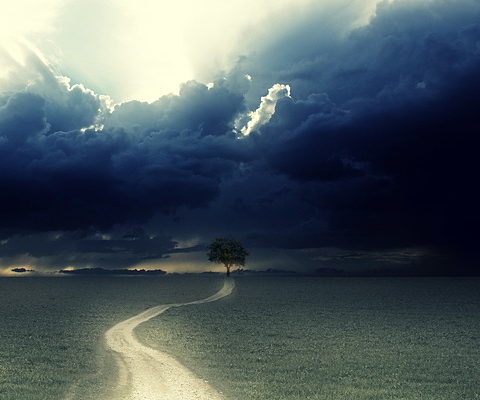 THERE is a far greater plan behind the Lenten Retreat which so many of you just participated in. The call at this hour to intense prayer, the renewal of the mind, and faithfulness to the Word of God is actually a preparation for Reign—the reign of the Kingdom of God on earth as it is in heaven.

DON’T LET THE EVIL DISTRACT YOU

It was around 2002, while driving along a long stretch of highway in northern Canada, that I suddenly heard the words:

I have lifted the restrainer.

I had no idea what this meant. But later that night, I opened my bible straight to 2 Thessalonians Chapter 2 where it speaks about a time of lawlessness that would come, a great apostasy that would reach fruition in the lawless one once God removes a “restrainer.” A Canadian bishop asked me to write about this, so you can read more about that here: Removing the Restrainer.

Since that time, we have watched the virtual explosion of corruption throughout nearly every facet of human society. That is to say that lawlessness, particularly judicial lawlessness, is unrestrained at this hour (see The Hour of Lawlessness).

But listen, dear brothers and sisters, if lawlessness is only going to increase and evil incarnate itself in almost every imaginable form, as it already is… what good is it for us to stare it in the face? For to spend one’s spare time contemplating evil will indeed transform your mind: from one fear to another. No, the sure antidote to the spirit of antichrist is to contemplate Jesus. And that was the substance of our Lenten Retreat.

But now, raise your eyes a bit to the horizon, and see what is coming… the reign of Jesus.

THE ERA OF LOVE

This past century, the veil has been lifting more and more as God sends messengers—prophets, to help us comprehend what has already been revealed in divine Revelation and Sacred Tradition, but which has not been fully understood.

…even if Revelation is already complete, it has not been made completely explicit; it remains for Christian faith gradually to grasp its full significance over the course of the centuries.—Catechism of the Catholic Church, n. 66

One of those souls, Servant of God Luisa Piccarreta, under obedience, wrote volumes of Christ’s words spoken to her, revelations that plumb the depths of His heart and deep love for humanity—a love that will be further actualized in the era to come:

Ah, my daughter, the creature always races more into evil. How many machinations of ruin they are preparing! They will go so far as to exhaust themselves in evil. But while they occupy themselves in going their way, I will occupy Myself with the completion and fulfillment of My Fiat Voluntas Tua (“Thy will be done”) so that My Will reign on earth—but in an all-new manner. Ah yes, I want to confound man in Love! Therefore, be attentive. I want you with Me to prepare this Era of Celestial and Divine Love… —Jesus to Servant of God, Luisa Piccarreta, Manuscripts, Feb 8th, 1921; excerpt from The Splendor of Creation, Rev. Joseph Iannuzzi, p.80

Why would Jesus teach us to pray, “Thy kingdom come, Thy will be done on earth as it is in heaven” if it were not to be so? Yes, each day it can be so… but the Lord also intends that it be so to the ends of the earth.

And this gospel of the kingdom will be preached throughout the world as a witness to all nations, and then the end will come. (Matt 24:14)

For the Divine Will is like a seed that carries within it the creative power that conceived, impelled, and expands the very Universe. Moreover, the Divine Will became incarnate: the Word became flesh so that the fallen world could be drawn up into the Person of Jesus Christ and made wholly new again. Thus, by uniting ourselves to this Word-Made-Flesh, we would each individually become a new creation, and with the transformation of the whole body of Christ, the Church, creation itself would experience the liberating power of the Cross…

…in hope that creation itself would be set free from slavery to corruption and share in the glorious freedom of the children of God. We know that all creation is groaning in labor pains even until now… (Rom 8:21-22)

Thus, what is coming upon the world is not the end; it is not the extinction of life on earth that Satan and his pawns seem determined to bring about. 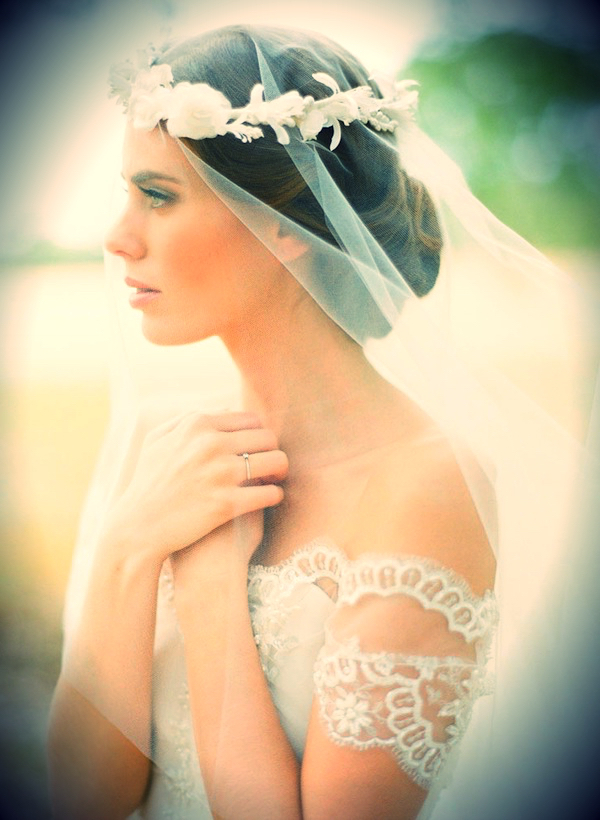 Rather, it is the blossoming of the lily of the Cross, the finally unveiling of the Bride of Christ in preparation for the return of Jesus in glory so “that he might present to himself the church in splendor, without spot or wrinkle or any such thing, that she might be holy and without blemish.” [1]Eph 5:27 St. John Paul II spoke of this coming grace with which the Church would be crowned before the end of time:

Thus, the “labor pains” of this present time, which will distress all the nations, are but a preparation for the reign of Jesus Christ to the ends of the earth when He will become “the heart of the world.” In labor with the body of Christ is also Our Lady, the Mediatrix of grace, the Woman of Revelation 12 who is pregnant and ready to birth the whole Christ, that is, both Gentile and Jew. She labours in this “time of grace” in order that we would receive the “grace of graces”:

It is the grace of incarnating Me, of living and growing in your soul, never to leave it, to possess you and to be possessed by you as in one and the same substance. It is I who communicate it to your soul in a compenetration which cannot be comprehended: it is the grace of graces… It is a union of the same nature as that of the union of heaven, except that in paradise the veil which conceals the Divinity disappears… —Jesus to Venerable Conchita, The Crown and Completion of All Sanctities, by Daniel O’Connor, p. 11-12; nb. Ronda Chervin, Walk with Me, Jesus 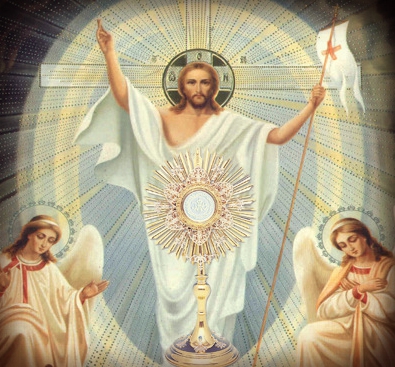 efficacious gifts which He bestowed upon the Church, namely, the Sacraments. This was affirmed by the Magisterium in the Theological Commission of 1952

If before that final end there is to be a period, more or less prolonged, of triumphant sanctity, such a result will be brought about not by the apparition of the person of Christ in Majesty but by the operation of those powers of sanctification which are now at work, the Holy Ghost and the Sacraments of the Church. —The Teaching of the Catholic Church: A Summary of Catholic Doctrine, London Burns Oates & Washbourne, p. 1140, from the Theological Commission of 1952, which is a Magisterial document. [2]Inasmuch as the cited work bears the Church’s seals of approval, i.e., the imprimatur and the nihil obstat, it is an exercise of the Magisterium. When an individual bishop grants the Church’s official imprimatur, and neither the Pope nor the body of bishops oppose the conferral of this seal, it is an exercise of the ordinary Magisterium.

Therefore, if Christ is to become, before the very end of all things, the “heart of the world,” then it is precisely His Heart that will reign to the ends of the earth. The Sacred Heart of Jesus, from which gushed forth the salvation of mankind, is really and truly the Eucharist. In fact, to live in the Divine Will is to live in God’s Word; and Jesus is the Word made flesh, He who said:

I am the living bread that came down from heaven; whoever eats this bread will live forever; and the bread that I will give is my flesh for the life of the world. (John 6:51)

The life of the world is to be the Eucharist, just as the human heart is the life of the body. Recall Christ’s words: “My food is to do the will of the one who sent me and to finish his work.” [3]John 4:34 Since Jesus is the “Father’s Word”, the Eucharist is at once the Divine Will, expressed perfectly in our midst. And thus,

The Eucharist is “the source and summit of the Christian life”… For in the blessed Eucharist is contained the whole spiritual good of the Church, namely Christ himself, our Pasch. —Catechism of the Catholic Church, n. 1324 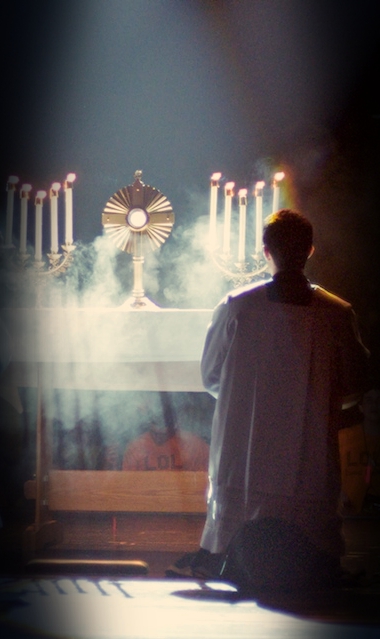 come, look no further than the Tabernacle.

The Eucharist is the efficacious sign and sublime cause of that communion in the divine life and that unity of the People of God by which the Church is kept in being. It is the culmination both of God’s action sanctifying the world in Christ and of the worship men offer to Christ and through him to the Father in the Holy Spirit. —Catechism of the Catholic Church, n. 1325

To prepare then for the Reign of Jesus, which comes after the brief reign of the “lawless one”, according to the early Church Fathers, [4]cf. Rev 20:1-6; see How the Era Was Lost is not a matter of devising new devotions or innovate prayer methods. Rather, it is to turn to Him where He is, there, in the Blessed Sacrament. It is to rekindle a deep and fiery love of Jesus who awaits you each day in your parish. It is to follow the seven paths within the Beatitudes in order to purify the heart and make it ready to receive the King in His fullness. In this regard, our Lenten Retreat’s call to an interior life of prayer is simply the continuation of our love and adoration of Him whom we receive at the altar. It is to commune with Him who was “there” but is now “here” within me. It is to carry Him also, as a living tabernacle, to everyone whom I meet that they may see, know, and experience His love and mercy through me. This love and devotion to the Eucharist, which is the Sacred Heart of Jesus, is the surest means to preparing for His Reign. 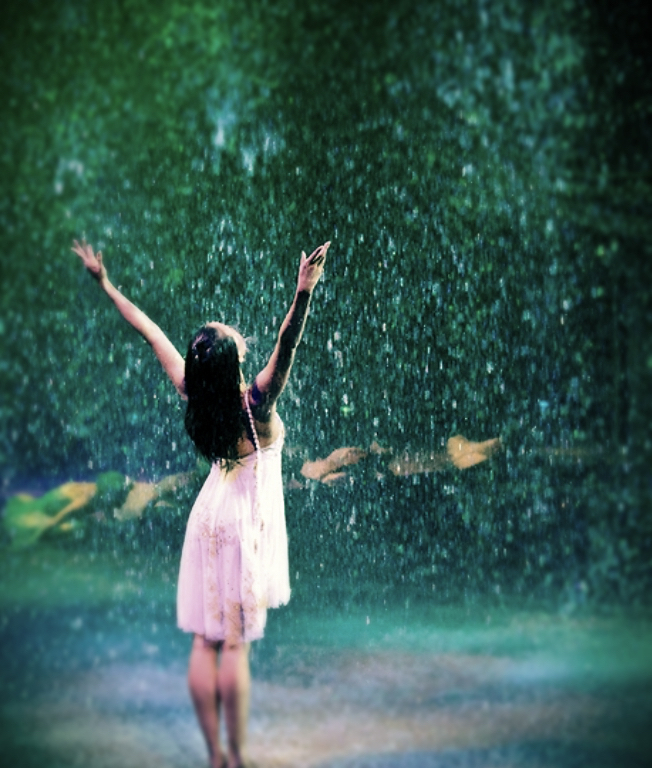 And yet, it is a preparation for something that only a few souls—most especially the Blessed Mother—have already known, but which many more soon will… if they prepare for Reign:

It is the Sanctity not yet known, and which I will make known, which will set in place the last ornament, the most beautiful and brilliant among all the other sanctities, and will be the crown and completion of all the other sanctities. —Jesus to Servant of God, Luisa Piccarreta, Manuscripts, Feb 8th, 1921; excerpt from The Splendor of Creation, Rev. Joseph Iannuzzi, p. 118

…every day in the prayer of the Our Father we ask the Lord: “Thy will be done, on earth as it is in heaven” (Matt 6:10)…. we recognize that “heaven” is where the will of God is done, and that “earth” becomes “heaven”—i.e., the place of the presence of love, of goodness, of truth and of divine beauty—only if on earth the will of God is done.  —POPE BENEDICT XVI, General Audience, February 1st, 2012, Vatican City

Thanks to everyone who has supported
this full-time ministry through
your prayers and gifts.

[+]
Posted in HOME, THE DIVINE WILL, THE ERA OF PEACE.