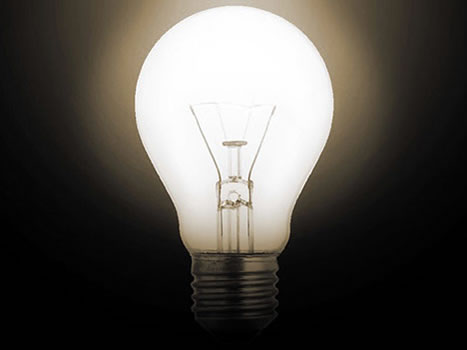 FEAST OF THE BIRTH OF MARY

LATELY, I have been in a near hand-to-hand combat with a terrible temptation that I don’t have time. Don’t have time to pray, to work, to get done what needs to be done, etc. So I want to share some words from prayer that really impacted me this week. For they address not only my situation, but the entire problem affecting, or rather, infecting the Church today.

In astonishing prescience and perception, Pope Pius X nailed the dangers facing the Catholic Church with a boldness and clarity that is rare today. In a single paragraph, he sums up the entire crisis of our times, that over a hundred years later, have shaken the very foundations of Christianity:

That We make no delay in this matter is rendered necessary especially by the fact that the partisans of error are to be sought not only among the Church’s open enemies; they lie hid, a thing to be deeply deplored and feared, in her very bosom and heart, and are the more mischievous, the less conspicuously they
appear. We allude, Venerable Brethren, to many who belong to the Catholic laity, nay, and this is far more lamentable, to the ranks of the priesthood itself, who, feigning a love for the Church, lacking the firm protection of philosophy and theology, nay more, thoroughly imbued with the poisonous doctrines taught by the enemies of the Church, and lost to all sense of modesty, vaunt themselves as reformers of the Church; and, forming more boldly into line of attack, assail all that is most sacred in the work of Christ, not sparing even the person of the Divine Redeemer, whom, with sacrilegious daring, they reduce to a simple, mere man. —POPE PIUS X, Pascendi Dominici Gregis, n. 2, Sept. 8, 1907

Indeed, while the intellectual apostolate is a necessary one in the Church (the formation of head and heart), it is also true that many "theologians" have shipwrecked the faith; that those with Masters and Doctorates have often lost sight of spiritual childhood, and thus, lost their faith at the same time. I’ll never forget the young priest I met in Toronto who told me how many of his friends who went through seminary training at the Pontifical University of St. Thomas Aquinas in Rome entered with zeal to become saints… and left doubting the very existence of God. As Pope Pius X rightly warned, there are those even within the bosom of the Church who have reduced Christ to a "simple, mere man," and thus, reduced her teachings to malleable precepts that can be reshaped, reformed, or reviled at will.

It goes without saying that something has gone terribly wrong in the Church over the past century. At the same time, we see the incredible activity of the Holy Spirit renewing the branches that have been pruned, sending new shoots through dead trunks, and reviving the wiltering fruit. The enemies of Christ will attack Him to the end… but they will never conquer. It remains for us then to recognize that grace is always active; that as individuals, we can become saints in every generation; that the darkness of our age is a cause for us to shine even brighter.

Do everything without grumbling or questioning, that you may be blameless and innocent, children of God without blemish in the midst of a crooked and perverse generation, among whom you shine like lights in the world, as you hold on to the word of life… (Phil 2:14-16)

What then is the antidote to Modernism, which is the sophistry of the spirit of antichrist in our times? Modernism is the attempt to modify beliefs to 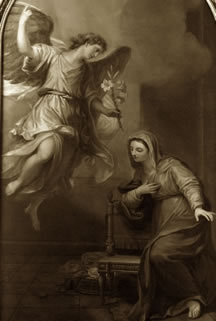 comply with modern ideas and philosophies. In other words, to disregard, and in many cases, disobey the teachings of the Church, often using catch phrases such as "They’re out of touch", "the Church is in the dark ages," or "it’s another patriarchical system holding minds in slavery," etc. etc. The antidote (as we celebrate the birth of Mary, Mother of God today) is to give God our simple, quiet, trusting fiat. As St. Paul wrote, to do God’s will "without grumbling or questioning"; to give our "yes" to all Jesus revealed and taught his Apostles, who in turn have handed these teachings down through their successors to our present day. (This is not the space in which I wish to address such issues as Tradition, authority, and biblical interpretation, so I have provided some links for further reading below. Rather, I want to speak simply, practically, about what you and I must do to defeat and crush that ancient serpent who tempted our first parents into disobedience.)

In prayer the other day, I sensed the Lord say:

My will is a food which satisfies. My will is a balm that heals. My will is a light that illuminates the darkness. My will is a strength that fortifies. My will is a wall that defends. My will is a tower that looks out, and sees all things in a new perspective. Yes, My son, My will is a fortress that no army can penetrate, no evil can devour, no enemy can overcome. So remain in My word always and everywhere, consciously choosing that which is My will. Neglect this, and a breach in the wall is made, or rather, a breach in your heart for every enemy and malice to penetrate. And believe Me child when I tell you that the enemy is prowling around you now looking for any and all cracks. But when you are in My will, then you can ignore the enemy, even should it be an army outside the wall of your heart. He cannot penetrate to devour you, unless you let him.

So you see now, child, how attentive you must be!

Do you not know that if you present yourselves to someone as obedient slaves, you are slaves of the one you obey, either of sin, which leads to death, or of obedience, which leads to righteousness? …For if you live according to the flesh, you will die, but if by the spirit you put to death the deeds of the body, you will live. (Rom 6:16, 7:13)

Struggling with too many things on my plate recently, too many obligations, too many demands, I found myself exhausted and anxious. So I simply said, "Lord, I’m going to get up and do your will, and leave you to worry about whether I get it all done." I began my day as usual with prayer… Ah, all was peaceful! All seemed to be falling into place. But then the kids began to bicker, something else interrupted me, something broke… and before I knew it, I was frustrated and angry.

The next morning, I sat down to pray, broken and defeated. "Lord, even when I set out to do your will, I still find myself at the end of the day without virtue or merit!" And I felt Him say,

From the very beginning, Jesus was obedient, even when it took Him from His Father’s house. Ponder this, child! Even My will trumps holy things! For there is nothing holy or good in disobedience, even should your actions have all the appearance of good.

Apply this to your life, then. Let My holy will interrupt you. Let My will change your course. Let My will direct you like the wind, which you do not know from where it comes or where it blows. Such is My will, and the soul carried by this Divine wind will sail straight into the depths of My awesome holiness and goodness. 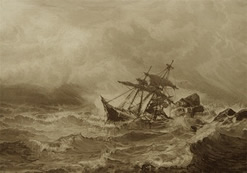 different things. St. Paul "thought" he was going to Italy to evangelize; but he was shipwrecked on the island of Malta. It must have been inconvenient, but Paul’s docility brought the awesome holiness and goodness of God to the Maltese—and one astonished ship crew. [3]

The whole problem in the modern world today is precisely this: we like religion until its demands "interrupt" us! I chuckled when I read some prominent evolutionists explain how they preferred Darwin’s theories of evolution, despite the gaping theoretical holes, because the alternative—belief in God—was unpalatable. Yes, God tends to interrupt things; Calvary was a bit of an intrusion indeed.

The second thing the Lord taught me was that His will is like the socket of a lamp.

In your weakness, I am strong. It is left to you then to constantly seek Me so that My power may shine through you. For weakness left to itself remains weakness, the way a lightbulb without being inserted in the socket remains cold and lifeless. Even when plugged in, it is the external power that helps generate the heat and light that gives the simple bulb its splendid shine… What is your role then? To keep the glass pure and untainted so that the light of Christ may shine through you. Remain unstained by sin, worldly affection, and impure intentions. Be always centered upon the socket of My will, sheltered beneath the shade of My Mother, and ready to broadcast at all times My Divine presence and light.

But there was something else He was telling me. Because you see, I was doing His will for the most part. But I was beginning to treat it like an equation: if I do this, this will be the outcome; if I do God’s will, I will become holy. But there was a missing ingredient in all of this: love. A few days later, I sensed Him say: 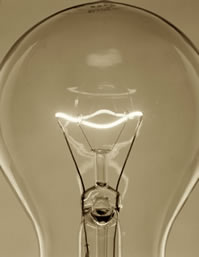 The filament of the lightbulb is like your heart. Even when plugged in, even when screwed into the socket, the bulb cannot glow unless the filament is intact. It must be connected at two points: obedience, and the second, surrender (which is faith). When these two points are contacted, the heart begins to glow with the supernatural gift of Love, which is Me. Then you are bringing your God into each and every moment, whether it is difficult or consoling, the cross or the resurrection.

Just as hydrogen and oxygen combine to make water, so too obedience and faith combine to produce an act of love. Obedience says I will do what you are asking of me Lord, through your Word, through the teachings of the Church, through the duty of the moment. Faith says I trust you, even when in accomplishing your will, I am faced with the utmost difficulties, reverses, delays, interruptions and contradictions. And I will accept it like Our Lady—not in arrogant acquiescence—but in humble, loving surrender.

Without love, I am nothing, said St. Paul.

The antidote to the apostasy in our times is to become like a little child. You may not understand all the teachings of the Church, or struggle with aspects of them; you may not comprehend your present trials and sufferings; it may even feel as though God has abandoned you at times. But your obedience to Him in these moments, in humility and faith, is a sign that the world desperately needs. And it will indeed be your food. Do you feel the immediate affects of eating an apple? No. But assuredly, you are receiving its vitamins and healthy sugars.

The only way to conquer the darkness is for someone to turn on the lights. Through obedience and faith, we can become that light to the world.

On interpreting Scripture: who has the authority? The Fundamental Problem

On Scripture and Oral Tradition: The Unfolding Splendor of Truth

Raising the Sails (Preparing for Chastisement)