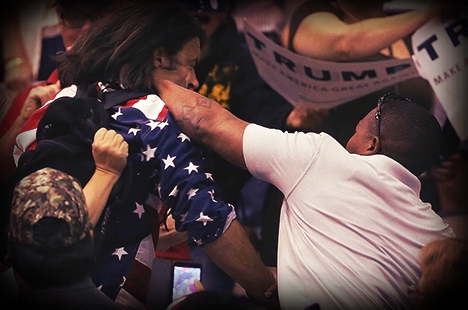 IF “the restrainer” is being lifted at this time, such that lawlessness is spreading throughout society, governments, and the courts, it is no surprise, then, to see what amounts to a collapse in civil discourse. For what is under attack at this hour is the very dignity of the human person, made in the image of God.

In just one single generation, our “intellectuals” have persuaded, what is now a majority, that human life in the womb is disposable; that old-age, depression, and sickness are reasons to end your life; that your biological sex is irrelevant, and that exploration of what was once considered devious and perverted behavior is now “healthy” and “good”. Suicide rates are climbing and considered “epidemic” in many countries, and it is no wonder: we are a generation taught that there is no God, that everything is random evolution, that we ourselves are not only meaningless particles, but the worst enemies of the planet. And perhaps the greatest attack on human dignity and worth is the plague of pornography that, almost single-handedly, is destroying self and mutual respect and the true meaning of beauty in the greater portion of the population. When we hate ourselves, how can we love our neighbour? When the view of one’s own sexuality and meaning is twisted, how can we view others otherwise?

Thus, with such an attack on the value of life, sexuality, and the family—in a word, all that is good—it now makes complete sense why St. Paul penned these words:

Understand this: there will be terrifying times in the last days. People will be self-centered and lovers of money, proud, haughty, abusive, disobedient to their parents, ungrateful, irreligious, callous, implacable, slanderous, licentious, brutal, hating what is good, traitors, reckless, conceited, lovers of pleasure rather than lovers of God, as they make a pretense of religion but deny its power. (2 Tim 3:2-5)

Forget earthquakes, plagues, and famines—the above, to me, is one of the greatest “signs of the times.” Indeed, speaking of the “end times”, Our Lord Himself correlated lawlessness with an accompanying decline in civility:

…because of the increase of evildoing, the love of many will grow cold. (Matt 24:12)

This is all to say that what we are watching and hearing in our cultures, whether it is on television, the internet, or the freeway, is an extension and natural consequence of the “culture of death” that has been institutionalized in nearly every facet of society. Moreover, the abusiveness that we see in the mainstream culture has grievously found its way into Catholic culture as well, where disagreements on the Pope, theology, politics, or analysis of the culture, frequently disintegrate into a smug anathema of the other. From one perspective:

Many of my non-Christian and non-believing friends have remarked to me that we ‘Catholics’ have turned the Internet into a cesspool of hatred, venom and vitriol, all in the name of defending the faith! The character assassination on the Internet by those claiming to be Catholic and Christian has turned it into a graveyard of corpses strewn all around. —Fr. Tom Rosica, PR Aide for the Vatican, Catholic News Service, May 17th, 2016; cf. cruxnow.com

The same could be said for those who attack faithful Catholics.

BEING CHRIST IN THE CRISIS

That is, will He find true faith, which is love in action? Yes, love in our words, love in our actions. Oh, when I find such a soul, one who is “meek and humble of heart,” [1]Matt 11:29 I want to cling to their presence, because there I see Jesus in our midst.

Many use the excuse that Jesus took out a whip in the temple, or denounced the Pharisees as “white-washed tombs”, as a defence for their assault upon the dignity of another. But they quickly forget that Jesus gently taught those same men in the temple when He was only twelve. He preached to them day and night on the hillsides and shores of Galilee. He patiently answered their questions, challenged their perspectives, and praised them when they were right. Only then, after all this, did He raise His voice when He saw them still defiling His Father’s House, or keeping the little ones bound under the yoke of religiosity. Because love is not only merciful but just… but love most always expends itself in mercy before it draws upon justice.

When it was all over, when they refused to repent and listen to Jesus and began to accuse Him of falsehoods… He gave them The Silent Answer.

Brothers and sisters, I believe we are drawing ever closer to the hour when the Church herself will be able to give little more than The Silent Answer.

I recently watched Spotlight, the award-winning movie about the cover-up of clerical sexual abuse in the Boston archdiocese. At the end of the movie, several screens rolled by showing how systemic this abuse is around the world. It is one of the most grievous tragedies in the history of the Church.

As a result, the faith as such becomes unbelievable, and the Church can no longer present herself credibly as the herald of the Lord. —POPE BENEDICT XVI, Light of the World, The Pope, the Church, and the Signs of the Times: A Conversation With Peter Seewald, p. 23-25

But this does not mean that we cannot still be witnesses, men and women who radiate the interior life of Christ, who incarnate the words that the world will not hear. The perfect image of this is the Cross. Jesus took all His preaching, which was God’s-love-revealed, and became it on the Cross. The Cross is love incarnate, in its fullest expression. So too, when we respond to others in silent patience, understanding, listening, presence, and compassion; when we are gentle, merciful, and meek; when we turn the other cheek, pray for ou
r persecutors, and bless those who curse us—we begin to reveal to them the power of the Cross.

If the word has not converted, it will be blood that converts. —POPE JOHN PAUL II, from poem, “Stanislaw”

When the centurion who stood facing him saw how he breathed his last he said, “Truly this man was the Son of God.” (Mark 15:39)

It draws your “blood” when others insult you, when you are misunderstood, when you are not listened to or treated most unfairly. But in these moments, we must look upon our “enemies” with supernatural eyes and a glance that goes beyond the temporal to the eternal. Love is God. God is love. And when you love, you are “bleeding” the presence of He who is Love. We have to start living and acting as men and women of faith who trust in the power of the Gospel, the power of truth, the power of love! For they are the living sword of the Spirit, which can pierce the heart and soul, between bone and marrow. [2]cf. Heb 4:12

Several months ago, I wrote about The Counter-Revolution that you and I must begin, within ourselves, and in the world around us. It begins by the restoration of beauty. Let that beauty begin today, then, with your words.

Take my yoke upon you, and learn from me; for I am gentle and lowly in heart… the wisdom from above is first pure, then peaceable, gentle, open to reason, full of mercy and good fruits, without uncertainty or insincerity… we were gentle among you, as a nursing mother cares for her children. With such affection for you, we were determined to share with you not only the gospel of God, but our very selves as well… live in a manner worthy of the call you have received, with all humility and gentleness, with patience, bearing with one another through love, striving to preserve the unity of the spirit through the bond of peace… Always be ready to give an explanation to anyone who asks you for a reason for your hope, but do it with gentleness and reverence, keeping your conscience clear… Blessed are the meek, for they shall inherit the earth. (Matt 11:29; James 3:17; Matt 5:5; 1 Thess 2:7-8; Eph 4:1-3; 1 Pet 3:15-16)