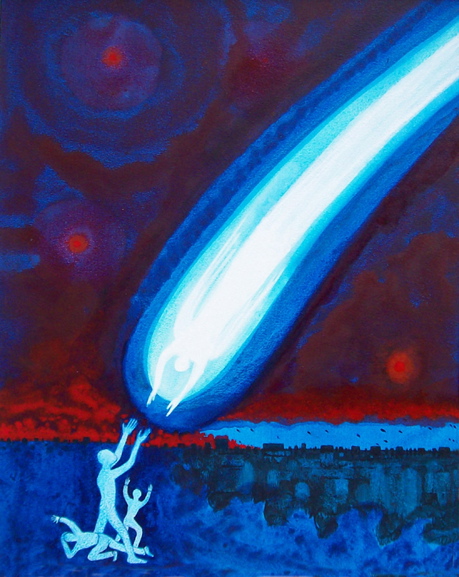 As you read this meditation, remember that God warns us because He loves us, and wishes “all men to be saved” (1 Tim 2:4).

IN the vision of the three seers of Fatima, they saw an angel standing over the earth with a flaming sword. In his commentary on this vision, Cardinal Ratzinger said,

The angel with the flaming sword on the left of the Mother of God recalls similar images in the Book of Revelation. This represents the threat of judgment which looms over the world. Today the prospect that the world might be reduced to ashes by a sea of fire no longer seems pure fantasy: man himself, with his inventions, has forged the flaming sword. —The Message of Fatima, from the Vatican’s website

When he became Pope, he later commented:

I believe that this angel hovers over the earth once again as mankind—in a far worse state of sin than it was in the apparitions of 1917—is reaching the proportions of pride that Satan had before his fall from Heaven.

…the threat of judgment also concerns us, the Church in Europe, Europe and the West in general… Light can also be taken away from us and we do well to let this warning ring out with its full seriousness in our hearts… —Pope Benedict XVI, Opening Homily, Synod of Bishops, October 2nd, 2005, Rome.

The sword of this angel of judgment is double-edged.

That is, the threat of judgment looming over the earth is one comprised both of consequence and cleansing.

“THE BEGINNING OF THE CALAMITIES” (CONSEQUENCE)

That is the subtitle used in the New American Bible to refer to the times that would visit a particular generation that Jesus spoke of:

You will hear of wars and reports of wars… Nations will rise against nation, and kingdom against kingdom; there will be famines and earthquakes from place to place. (Matt 24:6-7)

The first signs that this flaming sword has begun to swing are already in full view. The decline in fish populations around the world, the dramatic fall-off of bird species, the decline in honey-bee populations necessary to pollinate crops, dramatic and bizarre weather… all these sudden changes may throw delicate eco-systems into chaos. Add to that the genetic manipulation of seeds and foods, and the unknown consequences of altering creation itself, and the possibility of famine looms like never before. It will be a result of mankind’s failure to care for and respect God’s creation, putting profit ahead of the common good.

The failure of the wealthy Western nations to help develop food production of Third World countries will come back to haunt them. It will be difficult to find food anywhere…

As Pope Benedict pointed out, there is also the prospect of devastating war. Little is needed to be said here… though I continue to hear the Lord speak of a particular nation, quietly preparing itself. A red dragon.

Blow the trumpet in Tekoa, raise a signal over Beth-haccherem; for evil threatens from the north, and mighty destruction. O lovely and delicate daughter Zion, you are ruined! …”Prepare for war against her, Up! let us rush upon her at midday! Alas! the day is waning, evening shadows lengthen… (Jer 6:1-4)

These chastisements, strictly speaking, are not so much the judgment of God, but the consequences of sin, the principle of sowing and reaping. Man, judging man… condemning himself.

THE JUDGMENT OF GOD (CLEANSING)

According to our Catholic Tradition, a time is a approaching when…

He will come again to judge the living and the dead. —Nicene Creed

But a judgment of the living before the Last Judgment is not without precedent. We have seen God act accordingly whenever the sins of mankind have become grave and blasphemous, and the means and opportunities provided by God to repent are ignored (ie. the great flood, Sodom and Gomorrah etc.) The Blessed Virgin Mary has been appearing in numerous places throughout the world during the past two centuries; in those apparitions which have been given ecclesiastical approval, she provides a message of warning alongside the perpetual message of love:

As I told you, if men do not repent and better themselves, the Father will inflict a terrible punishment on all humanity. It will be a punishment greater than the deluge, such as one will never have seen before. Fire will fall from the sky and will wipe out a great part of humanity, the good as well as the bad, sparing neither priests nor faithful.  —Blessed Virgin Mary at Akita, Japan, October 13th, 1973

This message echoes the words of the prophet Isaiah:

Lo, the LORD empties the land and lays it waste; he turns it upside down, scattering its inhabitants: layman and priest alike… The earth is polluted because of its inhabitants who have transgressed laws, violated statutes, broken the ancient covenant. Therefore a curse devours the earth, and its inhabitants pay for their guilt; Therefore they who dwell on earth turn pale, and few men are left. (Isaiah 24:1-6)

The prophet Zechariah in his “Song of the Sword,” which refers to the apocalyptic great Day of the Lord, gives us a vision of just how many will be left:

In all the land, says the LORD, two thirds of them shall be cut off and perish, and one third shall be left. (Zec 13:8)

< p>The punishment is a judgment of the living, and is intended to remove from the earth all wickedness because the people “did not repent and give [God] glory (Rev 16:9):

“The kings of the earth… will be gathered together like prisoners into a pit; they will be shut up in a dungeon, and after many days they will be punished.” (Isaiah 24:21-22)

Again, Isaiah is not referring to the Final Judgment, but to a judgment of the living, specifically of those—either “layman or priest”—who have refused to repent and gain for themselves a room in the “Father’s house,” having chosen instead a room in the new Tower of Babel.  Their eternal punishment, in body, will come after “many days,” that is, after the “Era of Peace.” In the interim, their souls will have already received their “Particular Judgment,” that is, they will have already been “shut up” in the fires of hell awaiting the resurrection of the dead, and the Final Judgment. (See the Catechism of the Catholic Church, 1020-1021, on the “Particular Judgment” each of us will encounter at our death.)

From an ecclesiastical writer of the third century,

But He, when He shall have destroyed unrighteousness, and executed His great judgment, and shall have recalled to life the righteous who have lived from the beginning, will be engaged among men a thousand years… —Lactantius (250-317 A.D.), The Divine Institutes, Ante-Nicene Fathers, p. 211

This Judgment of Cleansing could come in a number of forms, but what is certain is that it will come from God Himself (Isaiah 24:1). One such scenario, common in both private revelation and in the judgments of the book of Revelation, is the arrival of a comet:

Before the Comet comes, many nations, the good excepted, will be scoured with want and famine [consequences]. The great nation in the ocean that is inhabited by people of different tribes and descent: by an earthquake, storm, and tidal waves will be devastated. It will be divided, and in great part submerged. That nation will also have many misfortunes at sea, and lose its colonies in the east through a Tiger and a Lion. The Comet by its tremendous pressure, will force much out of the ocean and flood many countries, causing much want and many plagues [cleansing]. —St. Hildegard, Catholic Prophecy, p. 79 (1098-1179 A.D.)

At Fatima, during the miracle which was witnessed by tens of thousands, the sun appeared to fall to the earth. Those who were there thought the world was coming to an end. It was a warning to emphasize Our Lady’s call to penance and prayer; it was also a judgment averted by Our Lady’s intercession (see Trumpets of Warning — Part III)

A sharp two-edged sword came out of his mouth, and his face shone like the sun at its brightest. (Rev 1:16)

God is love, and therefore, His judgment is not contrary to the nature of love. One can already see His mercy at work in the present situation of the world. Many souls are beginning to take notice of troubling world conditions, and hopefully, looking at the root cause of much of our sorrows, that is, sin. In that sense too, an “illumination of conscience” may already have begun (see “The Eye of the Storm”).

Through conversion of the heart, prayer, and fasting, perhaps much of what is written here can be lessened, if not altogether delayed. But judgment will come, whether at the end of time or at the end of our lives. For the one who has put his faith in Christ, it will not be an occasion to tremble in terror and despair, but of rejoicing in the immense and unfathomable mercy of God.