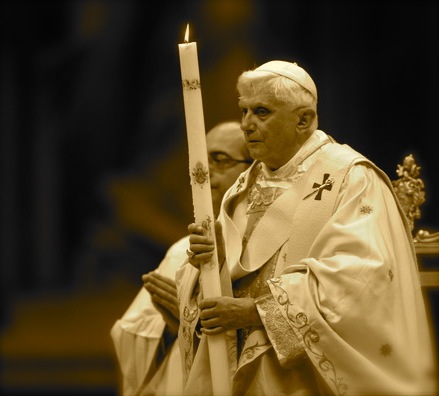 THE ATTACK ON BENEDICT

It is unprecedented in our times to see the kind of criticism leveled against the Holy Father. [1]read the attacks on Pope Benedict since announcing his resignation: www.LifeSiteNews.com Calls for Pope Benedict to step down, to retire, to be impeached, etc., are rising not only in number but in intensity of anger. Newspaper columns, comedians, and regular news shows feature guests and commentaries which are shockingly rude and vulgar. The Holy Father recently commented on the pain which personal attacks have caused him, particularly from those within the Church. Common respect and courtesy are becoming, it seems, a thing of the past—and the “frog” seems oblivious.

There will be terrifying times in the last days. People will be self-centered and lovers of money, proud, haughty, abusive… irreligious, callous, implacable, slanderous, licentious, brutal, hating what is good… as they make a pretense of religion but deny its power. (2 Tim 3:1-5)

Some news services have even cited an anonymous source within the Vatican curia who is calling this papacy “a disaster.” Yes, if you are an apostate, then Pope Benedict is a disaster. If you are a radical feminist, he is an obstacle. If you are a moral relativist, a liberal theologian, or a lukewarm coward, then indeed, this Pope is a big problem. For he continues to shout from the rooftops the truth which sets us free. Whether it is guaranteeing the sanctity of marriage in North America or exposing the condom-lie in Africa, this Pope has been untiring in teaching the truth. But this truth, like a Smoldering Candle, is quickly disappearing:

I was taken to Rome where the Holy Father, plunged in affliction, is still concealed in order to elude dangerous exigencies. His chief reason for lying concealed is because he can trust so few… The little black man in Rome*, whom I often see so often, has many working for him without their clearly knowing for what end. He has his agents in the new black church also. If the Pope leaves Rome, the enemies of the Church will get the upper hand… I saw them intercepting or turning away the roads that led to the Pope. When they did succeed in getting a Bishop according to their liking, I saw that he had been intruded contrary to the will of the Holy Father; consequently, he possessed no legitimate authority… I saw the Holy Father very prayerful and Godfearing, his figure perfect, through worn out by old age and manifold sufferings, his head sunk on his breast as if in sleep. He often fainted away and seemed to be dying. I often saw him supported by apparitions during his prayer, and then his head was upright.   —Blessed Anne Catherine Emmerich (1774–1824 A.D.); The Life and Revelations of Anne Catherine Emmerich; message from April 12th, 1820, Vol II, p. 290, 303, 310; *n.b. “black” here does not mean skin color, per se, but “sinister.”

Blessed Anne seems to have described Pope John Paul II, whose head often leaned on his breast as a symptom of Parkinsons disease. (So too, Pope Benedict has made the extraordinary announcement of his retirement due to his age and health.) If so, her vision of an illegitimately elected leader—”the little black man in Rome” or someone he appoints—may be on the horizon. Her vision continues:

I saw enlightened Protestants, plans formed for the blending of religious creeds, the suppression of papal authority… I saw no Pope, but a bishop prostrate before the High Altar. In this vision I saw the Church bombarded by other vessels… It was threatened on all sides… They built a large, extravagant church which was to embrace all creeds with equal rights… but in place of an altar were only abominations and desolation. Such was the new church to be… —Ibid. Vol. II, p. 346, 349, 353

This dark Revolution in the Church and the world has been prophesied by several saints and proven mystics, in which the Holy Father will go into exile.

Religion shall be persecuted, and priests massacred. Churches shall be closed, but only for a short time. The Holy Father shall be obliged to leave Rome. —Blessed Anna Maria Taigi, Cathol
ic Prophecy, Yves Dupont, Tan Books, p. 45

A direct attack on the papacy was foreseen by his predecessor, Pope Pius X:

I saw one of my successors taking to flight over the bodies of his brethren. He will take refuge in disguise somewhere; after a short retirement he will die a cruel death. The present wickedness of the world is only the beginning of the sorrows which must take place before the end of the world. —POPE PIUS X, Catholic Prophecy, p. 22

The Holy Father knows there are wolves within his ranks. In a statement that was both unexpected and possibly prophetic, Pope Benedict said in his inaugural homily:

As I wrote in A Black Pope?, we will always be guided by “the rock,” Peter. Jesus said the gates of hell would not prevail against him and the Church. But that does not mean that the Church will not be temporarily shepherdless at some point, and that an illegitimately elected bishop could rise in his place. But there will never be a legitimate pontiff who will lead the flock into heresy. That is Christ’s guarantee.

Continue to pray for me, for the Church and for the future pope. The Lord will guide us. —POPE BENEDICT XVI, his final Mass, Ash Wednesday, February 13th, 2013

In the meantime, we can gauge the apostasy in the Church by reading the level of antagonism against the Supreme Pontiff. A moment will come when a pope may well be driven into exile. The precursor to this is clergy who have fallen into apostasy:

Strike the shepherd, that the sheep may be scattered… (Zech 13:7)

So they were scattered, because there was no shepherd… As I live, says the Lord GOD, because my sheep have become a prey, and my sheep have become food for all the wild beasts, since there was no shepherd; and because my shepherds have not searched for my sheep, but the shepherds have fed themselves, and have not fed my sheep; therefore, you shepherds, hear the word of the LORD: Thus says the Lord GOD, behold, I am against the shepherds; and I will require my sheep at their hand, and put a stop to their feeding the sheep; no longer shall the shepherds feed themselves. I will rescue my sheep from their mouths, that they may not be food for them. For thus says the Lord GOD: Behold, I, I myself will search for my sheep, and will seek them out. As a shepherd seeks out his flock when some of his sheep have been scattered abroad, so will I seek out my sheep; and I will rescue them from all places where they have been scattered on a day of clouds and thick darkness. (Ezekiel 34:5, 8-12)

At times one gets the impression that our society needs to have at least one group to which no tolerance may be shown; which one can easily attack and hate. And should someone dare to approach them—in this case the Pope—he too loses any right to tolerance; he too can be treated hatefully, without misgiving or restraint. —Letter of His Holiness Pope Benedict XVI to All the Bishops of the World, March 10, 2009; Catholic Online

Please consider tithing to our apostolate
and our pressing needs this year for evangelization.
Thanks so much.