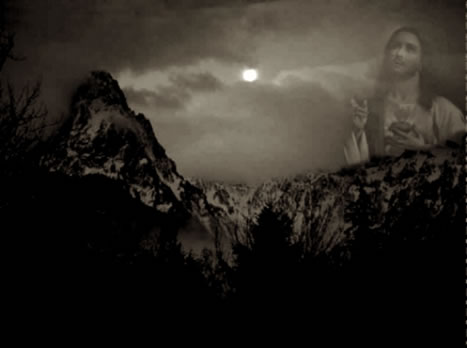 I’ll never forget the day we drove up that mountain where we were led to stay for several days. It was a windy road to the top where a retreat house sits in a large opening in the forest. As our vehicle crawled along the gravel road, Fr. Kyle and I were praying along with my song, Come Holy Spirit (Let the Lord Know album). Suddenly, the Holy Spirit fell upon me so swiftly, so powerfully, that I had to stop on the road! As I knelt there weeping, I saw in my heart a stream of exiles walking up the mountain with nothing but knapsacks and the clothes on their backs. Then, in what seemed some kind of interior vision, I saw the mountain on fire—a spiritual blaze, as though it were a beacon. Instinctively, I sensed that this place would some day be a refuge. That night, someone emailed me an image (see above) of the Sacred Heart of Jesus over the mountains.

Those days are coming. When and where, I do not know.

It was during that time, right after a small group of us entered the retreat house and consecrated ourselves to the Sacred Heart, that I received a “word” before the Blessed Sacrament. It spoke of a time when Christians would congregate into communities… at the same time, others outside the faith would gather as well in “parallel communities” (see The Coming Refuges and Solitudes). It is within these Christian communities that many miracles, healings, and graces will flow as the power of the Holy Spirit is released in a profound way. The powers of darkness will find no place in these refuges of light.

Try to gather together more frequently to give thanks to God and to praise him. For when you come together frequently, Satan’s powers are undermined, and the destruction he threatens is done away with in the unanimity of your faith. Nothing is better than peace, in which all warfare between heaven and earth is brought to an end. —a letter to the Ephesians by Saint Ignatius of Antioch, bishop and martyr, Liturgy of the Hours, Volume I

Those are words worth contemplating for the days ahead…

In and after the devastation of Hurricane Katrina, the world watched as New Orleans descended into a city of chaos. Shopping malls were emptied. Mansions were left vacated. Looters broke into stores. Criminals roamed the streets. Nurses abandoned patients in the hospital. Food, water, and shelter were scarce… it was surreal to watch, since I had been there myself only two weeks before the storm.

Fr. Kyle would often say that Hurricane Katrina was a microcosm of what is going to come upon the earth if we continue down the path we are on. And what is that path? Unbridled hedonism, abortion, sexual experimentation, alternative marriage, greed in the markets, corruption in politics…. in other words, the daily headlines. In fact, he was saying nothing different than Our Lady of Kibeho, who appeared to some children in Rwanda to warn them of the genocide that would come if that country did not turn from its path. What happened in Rwanda was a warning to the world that we need to return to the Lord, according to the messages given the children there, and in other apparitions throughout the world:

…love God, love and be kind to each other, read the Bible, follow God’s commandments, accept the love of Christ, repent for sins, be humble, seek and offer forgiveness, and live the gift of your life how God wants you to—with a clean and open heart and a clear conscience. —Our Lady of Kibeho, Immaculée Ilibagiza with Steve Erwin, p. 62

Instead, the current path of humanity is one that has led Pope Benedict, in his New Year’s message, to warn of the “shadows on the horizon of today’s world.” [1]cf. www.cbc.ca, Jan. 1, 2012 He identified those shadows, in part, in his address to the Vatican’s Ambassadors last week:

I am convinced that legislative measures which not only permit but at times even promote abortion for reasons of convenience or for questionable medical motives compromise the education of young people and, as a result, the future of humanity… the family, based on the marriage of a man and a woman is not a simple social convention, but rather the fundamental cell of every society. Consequently, policies which undermine the family threaten human dignity and the future of humanity itself. The present moment is sadly marked by a profound disquiet and the various crises – economic, political and social – are a dramatic expression of this… Truly the world is dark wherever men and women no longer acknowledge their bond with the Creator and thereby endanger their relation to other creatures and to creation itself. —POPE BENEDICT XVI, annual address to Vatican ambassadors, January 9th, 2012, LifeSiteNews.com

Those words were merely an echo of an address the Pope gave to the Roman Curia a year earlier, when he compared the present state of the world to the collapse of the Roman Empire (see On the Eve).

The overriding sense that both Fr. Kyle and I carried off of the mountain seven years ago was the need to Prepare. There were other words the Lord gave us, some whose fulfillment may not be far off. While we felt the seriousness of the times, we also felt a great anticipation of what Heaven is preparing to do. Hence, the word “Prepare” does not mean only to “brace” oneself for hardship—an inevitable eventuality of a world bent on embracing death as a virtue. But it means, perhaps above all, to prepare oneself to receive the power of the Holy Spirit. Indeed, this time of Our Lady’s apparitions on the earth are really the formation of an “upper room”: the preparation of the Church to be “clothed with power from on high.” [2]cf. Luke 24:49

I want to write more about this. But for now, I’ll leave you with the words of St. Ignatius from today’s Office Reading… a word that calls us back to our first love, to God Himself.

For the Lord received anointing on his head in order that he might breathe incorruptibility on the Church. Do not be anointed with the evil odour of the teachings of the prince of this world, do not let him lead you captive away from the life that is set before you. But why is it that we are not all wise when we have received the knowledge of God, which is Jesus Christ? Why do we perish in our stupidity, not knowing the gift the Lord has truly sent us? My spirit is given over to the humble service of the cross which is a stumbling block to unbelievers but to us salvation and eternal life. —a letter to the Ephesians by Saint Ignatius of Antioch, bishop and martyr, Liturgy of the Hours, Vol I