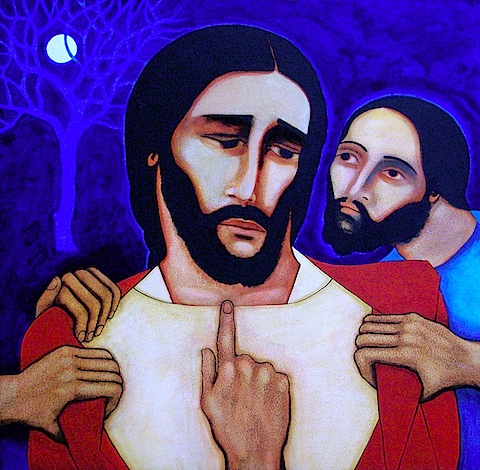 Betrayed By a Kiss, by Michael D. O’Brien

TO enter “the school of love” does not mean one must suddenly enroll in “the school of compromise.” By this I mean that love, if it is genuine, is always truthful.

The world of common sense has been swept away by a wave of political correctness that has attempted to make everyone “nice,” but not necessarily honest. The Archbishop of Denver put it well recently:

I think modern life, including life in the Church, suffers from a phony unwillingness to offend that poses as prudence and good manners, but too often turns out to be cowardice. Human beings owe each other respect and appropriate courtesy. But we also owe each other the truth—which means candor.  —Archbishop Charles J. Chaput, O.F.M. Cap., Rendering Unto Caesar: The Catholic Political Vocation, February 23rd, 2009, Toronto, Canada

Nowhere has this cowardice been more evident than in the battle against the “culture of compromise” in human sexuality. It is due in part to a lack of solid teaching on human sexuality and marriage:

…there’s no easy way to say it. The Church in the United States has done a poor job of forming the faith and conscience of Catholics for more than 40 years. And now we’re harvesting the results—in the public square, in our families and in the confusion of our personal lives. —Ibid.

The same could be said for Canada, if not most of the Western world. And thus, minds are being easily swayed by emotional and seemingly logical statements such as those from the makers of the pro-gay film, Milk. In Sean Penn’s acceptance speech for “Best Actor” at the recent Academy Awards, he lashed out at the “culture of ignorance” for opposing “gay rights”:

I think that these are largely taught limitations and ignorances, this kind of thing, and it’s a really, it’s very sad in a way, because it’s a demonstration of such emotional cowardice to be so afraid to be extending the same rights to a fellow man as you would want for yourself. —www.LifeSiteNews.com, February 23, 2009

If Harvey [the story’s main gay character] had not been taken from us 30 years ago, I think he’d want me to say to all of the gay and lesbian kids out there tonight, who have been told that they are “less than” by their churches, by the government or by their families—that you are beautiful, wonderful creatures of value and that no matter what anyone tells you, God does love you and that very soon, I promise you, you will have equal rights federally, across this great nation of ours. —www.LifeSiteNews.com, February 23, 2009

This sounds nice, and it is true that each individual is a “beautiful, wonderful creature of value” (however, the unborn, aged, and terminally ill are almost never extended this value in the minds of many of these “humans rights” champions.) According to this thinking, why not apply “equal rights” to all of the polygamists who want multiple spouses? Or how about all those who want legal status with their “spouse”… who just happens to be an animal? And then there’s the well-organized groups who feel that pedophilia should be decriminalized. Why would they not be entitled to “marriage”? Because it doesn’t seem right? It doesn’t feel right? But neither did gay marriage 20 years ago, and now it is being enshrined as a universal right by those who are graduating from the School of Compromise. Perhaps those who oppose polygamy and pedophile or animal marriage should cease their feelings of intolerance at once!

Up until this generation, it has been universally recognized that marriage is not a product of a religious group, but a basic human and social principle rooted in natural law itself. For example, if a judge rules that gravity doesn’t exist, regardless of his authority, he will not make a dent in the laws of physics. He may jump off of the top of the Supreme Court building, but he will not fly; he will crash to the ground. Gravity remains now and always a natural law, whether the Supreme Court says so or not. So too, true marriage is based on reality: the union of a man and woman, which forms a unique social and genetic building block for civilization. They alone can naturally beget unique children. They alone form a natural marriage. Unlike the slavery of blacks, which was immoral based on the principles of natural law and inherent human dignity, alternative definitions of marriage flow from an ideology divorced from reason.

But once this logical foundation is destroyed, how do people discern what is moral, and how will they be able to know what ensures a healthy civilization and what will destroy it? Who decides today’s moral code? And when the foundations crumble still further, who will decide tomorrow’s?

Indeed, once morality leaves the orbit of truth, it can gravitate just about anywhere.

History is full of characters who sat on the high seats of power while legitimizing everything from immorality to serious atrocities in the name of “truth.” The only “truth” they would tolerate was their agenda for social reconstruction or revolution. So too at times have evils been committed by “religious.” But the answer is certainly not to annihilate religion, as many propose today, but rather to embrace truth as written in natural law and from which the moral order has been derived. For from this flows the inherent dignity and value of every person, regardless of color or creed. This truth continues to be found in the major religions, but is revealed in its fullness as the “gate of salvation” in the Catholic Church. Thus, the “separation” of Church and state is a bit of a misnomer; the Church is necessary to enlighten the state and to keep her pointed in the direction of true order. The separation should be one of logistics, not a destructive split between faith and reason.

Moral conscience requires that, in every occasion, Christians give witness to the whole moral truth, which is contradicted both by approval of homosexual acts and unjust discrimination against homosexual persons… men and women with homosexual tendencies “must be accepted with respect, compassion and sensitivity. Every sign of unjust discrimination in their regard should be avoided” (John Paul II, Encyclical Letter Evangelium Vitae, 73). They are called, like other Christians, to live the virtue of chastity. The homosexual inclination is however “objectively disordered” and homosexual practices are “sins gravely contrary to chastity”… Those who would move from tolerance to the legitimization of specific rights for cohabiting homosexual persons need to be reminded that the approval or legalization of evil is something far different from the toleration of evil. In those situations where homosexual unions have been legally recognized or have been given the legal status and rights belonging to marriage, clear and emphatic opposition is a duty. —Congregation for the Doctrine of the Faith, Considerations Regarding Proposals to Give Legal Recognition to Unions Between Homosexual Persons; n. 4-6

This statement is clear: Christians today may tolerate evil—that is, that which is not good—to the extent that they respect the free will of others. But genuine tolerance never can mean cooperation with clearly evil choices (either explicitly by our actions, or implicitly by our silence.) As did our Lord, Christians are obliged to speak the truth when fellow human souls are tending toward actions which displace them from the moral order and lead them away from the Creator. To do so is in itself an act of love. For whoever sins is a slave to sin (John 8:34). The truth, however, can set them free (John 8:32).

Sadly, fewer and fewer Christians are proclaiming the truth because, I imagine in part, it is simply uncomfortable to do so. It is “confrontational” to suggest that two persons of the same-sex, or different sex for that matter, should not co-habit, but remain chaste. We have fallen into the habit of trying to be “nice” at the expense of truth.

The cost can be measured in lost souls.

Unless we are willing in this late hour to be “fools for Christ,” we will easily be swept away in the New World Order in which one may belong, so long as he leaves the Christian God in the drawer.

Whoever wishes to save his life will lose it, but whoever loses his life for my sake and that of the gospel will save it. (Mark 8:35)

It is the Divine Judge—not the earthly ones—to whom we will be accountable.

Relativism, that is, letting oneself be tossed and ‛swept along by every wind of teaching’, appears the sole attitude acceptable to today’s standards. —Cardinal Ratzinger (POPE BENEDICT XVI), Pre-conclave Homily, April 18th 2005

Those who challenge this new paganism are faced with a difficult option. Either they conform to this philosophy or they are faced with the prospect of martyrdom. —Fr. John Hardon (1914-2000), How to Be a Loyal Catholic Today? By Being Loyal to the Bishop of Rome; http://www.therealpresence.org/eucharst/intro/loyalty.htm