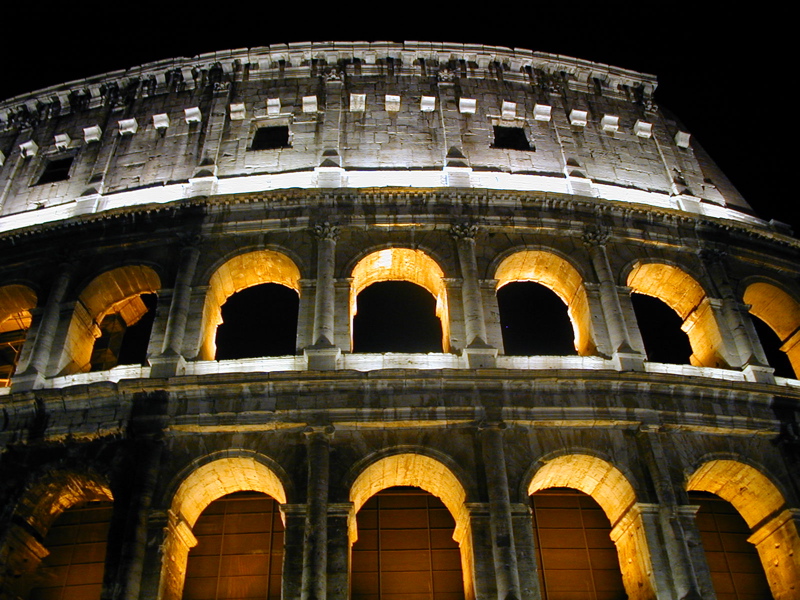 I write you tonight from Bosnia-Hercegovina, formerly Yugoslavia. But I still carry with me thoughts from Rome…

I knelt down and prayed, asking for their intercession: the prayers of the martyrs who shed their blood in this very place centuries ago. The Roman Coliseum, Flavius Ampitheatre, soil of the seed of the Church.

It was another powerful moment, standing in this place where popes have prayed and little layman have aroused their courage. But as the tourists whisked by, cameras clicking and tour guides chattering, other thoughts came to mind…

This place was a form of entertainment for the Roman Citizens—the ancient version of television. Many people might be horrified at the animal and human sacrifices which occurred here over a hundred day period, once or twice a year. And yet, are we really that different today?

Modern man has once again developed a taste for blood. WWF wrestling, graphic blood-spurting movies, ultra-realistic and violent video games, extreme "sports", and "reality television" with its increasing element of gore, are the new ampitheatre of our times. How long, I wondered to myself, before these forms of entertainment become boring, and we need to find new means of stimulation? And just who exactly will be the actors and actresses? I speculate here only, but is the world being desensitized to accept once again the execution of humans as a form of entertainment? (I will also overlook the fact that the last century witnessed more martys for the faith than all the centuries combined before it.)

THE SIN OF THE CENTURY

These manifestations of gore and violence and explicit sexuality are in reality the fruit of a tree gone awry—that is, the human heart. We have become so numb to our interior reality, that collectively we have accepted entertainments that a mere four or five decades ago would have shocked even the most hardened of hearts.

Pope John Paul II summed it up most poignantly:

The sin of the century is the loss of the sense of sin.

This sense of sin, far from a supernatural guilt-trip, is the inner-baromoter which keeps us aligned to the will of God. The will of God, in turn, brings us life. As Jesus said,

If you keep my commandments, you will remain in my love… I have told you this so that my joy may be in you and your joy may be complete. (John 15:10-11)

Do we not know from our own experience that sin brings about a little death within us, whereas, living the commandments of God brings life, joy, and peace?

This loss of the sense of sin is a disaster for our generation. This is plain as we ponder the explosion of teenage suicide, violent crime, alcoholism, drug-use, obesity, addictions, and depression. It means the loss of souls, and as such, this era is quickly drawing to an end.

The time of grace we live in will expire, and the sense of sin, of God, of truth, of all that really matters will come to us as quickly as lightning connects the earth to the heavens. All that this generation has built that is not constructed on God, on the sure foundation of truth which is Christ, will crumble.

Just as the Coliseum now lies in ruins.

But just as the marble that was used to adorn the Coliseum was eventually taken away and used to build many churches, including St. Peter’s Basilica in the Vatican, so too will the "ruins" of this present generation serve to build a new era of peace. For within it will be found those remnants of virtue; those holy men and women who remained faithful to Christ, even unto death. They will become the building blocks of a purified Church, holy, blameless, and radiating the light of Christ until His Final return in glory.

Now is the time, then, to watch and pray as our Lord commanded. That is to say, cultivate the "sense of sin". But do so not in the darkness of self-pity or accusation, but in the light of mercy and love which pours forth from the side of Christ. Yes, this takes faith when "other" voices tell us something else. But trust in Christ, come to Christ, and let Him dress you in virtue, holiness, and purity.

For these are the clothes to be worn at the Banquet of the new era.