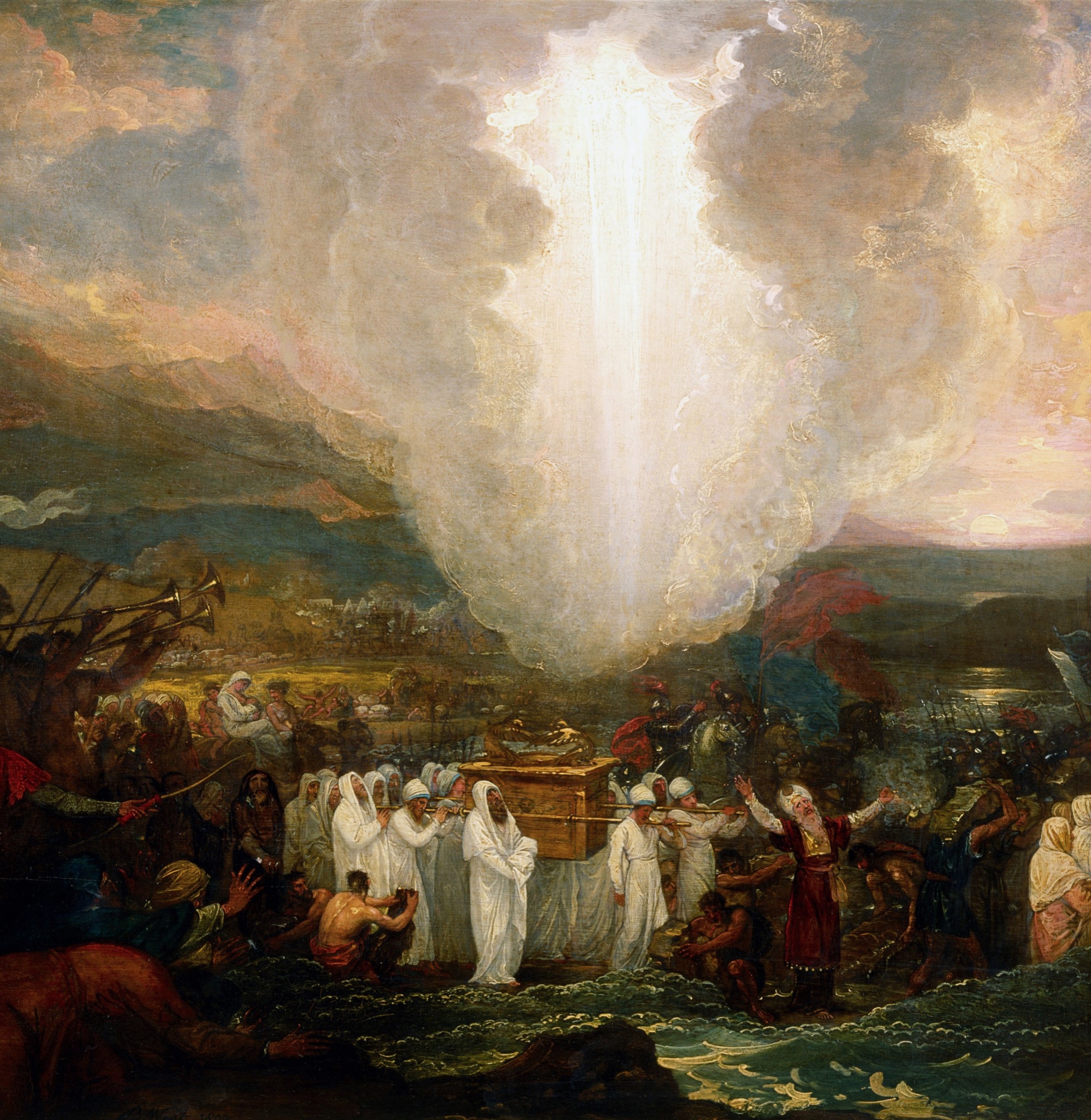 Joshua passing the River Jordan with the Ark of the Covenant by Benjamin West, (1800)

AT the birth of every new era in salvation history, an ark has led the way for the People of God.

When the Lord purged the earth through a flood, establishing a new covenant with Noah, it was an ark that carried his family into the new era.

See, I am now establishing my covenant with you and your descendants after you and with every living creature that was with you:the birds, the tame animals, and all the wild animals that were with you—all that came out of the ark. (Gen 9:9-10)

When the Israelites completed their forty-year journey through the desert, it was the “ark of the covenant” that preceded them into the Promised Land (see today’s first reading).

The priests carrying the ark of the covenant of the Lord stood on dry ground in the Jordan riverbed while all Israel crossed on dry ground, until the whole nation had completed the crossing of the Jordan. (Josh 3:17)

In the “fullness of time,” God established a New Covenant, preceded yet again by an “ark”: the Blessed Virgin Mary.

Mary, in whom the Lord himself has just made his dwelling, is the daughter of Zion in person, the ark of the covenant, the place where the glory of the Lord dwells. She is “the dwelling of God . . . with men.” Full of grace, Mary is wholly given over to him who has come to dwell in her and whom she is about to give to the world. —Catechism of the Catholic Church, n. 2676

And finally, for the new “era of peace” to come, again the People of God will be led by an ark, who is also 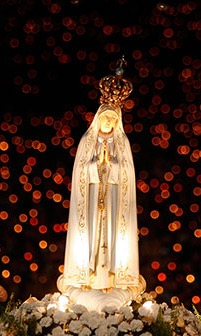 the Blessed Mother. For the act of Redemption, which began with the Incarnation, is to reach its apex when the Woman gives birth to the “whole” body of Christ.

Then God’s temple in heaven was opened, and the ark of his covenant could be seen in the temple. There were flashes of lightning, rumblings, and peals of thunder, an earthquake, and a violent hailstorm. A great sign appeared in the sky, a woman clothed with the sun, with the moon under her feet, and on her head a crown of twelve stars. She was with child and wailed aloud in pain as she labored to give birth. (Rev 11:19-12:2)

In each historic moment above, the ark is at once a refuge for God’s people. Noah’s ark preserved his family from the flood; the ark of the covenant preserved the ten commandments and safeguarded the Israelites’ passage; the “ark of the new covenant” safeguarded the Messiah’s holiness, forming, protecting, and preparing Him for His mission. And at last—because the Son’s mission is completed through the Church—the Ark of the New Covenant is given to safeguard the Church’s purity, forming, protecting, and preparing the Church for her final act before the close of history, which is to become a 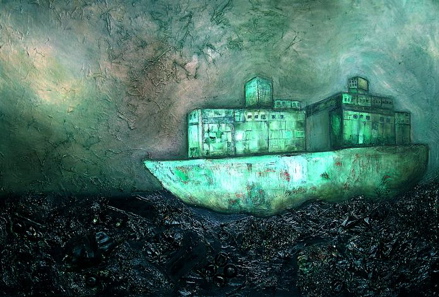 The Church is “the world reconciled.” She is that bark which “in the full sail of the Lord’s cross, by the breath of the Holy Spirit, navigates safely in this world.” According to another image dear to the Church Fathers, she is prefigured by Noah’s ark, which alone saves from the flood. —Catechism of the Catholic Church, n. 845

If an ark was necessary to preserve Noah, to safeguard the Israelites passage, and provide a tabernacle from which the Son of God would take His flesh, what of us? The answer is simple: we too are her children since we are the body of Christ.

And thus, even now, this Woman labours to give birth to a “son”—the whole body of Christ, Jew and Gentile—in order to help her Son bring His plan of Redemption to completion during the “era of peace”, which is the heart of the Day of the Lord.

And I am sure that he who began a good work in you will bring it to completion at the day of Jesus Christ. (Phil 1:6; RSV)

She participates in this “good work” by forming her children to become copies of herself so that we too may “conceive” and give birth to Jesus in the world through an interior life that is His life, His Spirit, His Will. [3]cf. The Coming New and Divine Holiness

In Mary, this work was already completed. She “is the perfect woman in whom even now the divine plan is fulfilled, as a pledge of our resurrection. She is the first fruit of Divine Mercy since she was the first to share in the divine covenant sealed and fully realized in Christ who died and rose for us.” [4]POPE ST. JOHN PAUL II, Angelus, August 15th, 2002; vatican.va

Great and heroic was the obedience of her faith; it was through this faith that Mary was perfectly united to Christ, in death and glory. —POPE ST. JOHN PAUL II, Angelus, August 15th, 2002; vatican.va

Her fiat, then, is the template for The Plan of the Ages.

And only then, when I see man as I created him, will My work be complete… —Jesus to Luisa Picarretta, The Gift of Living in the Divine Will, by Rev. Joseph Iannuzzi, n. 4.1, p. 72

Who better to teach us complete obedience than she who was perfectly obedient?

As St. Irenaeus says, “Being obedient she became the cause of salvation for herself and for the whole human race.” Hence not a few of the early Fathers gladly assert. . .: “The knot of Eve’s disobedience was untied by Mary’s obedience: what the virgin Eve bound through her disbelief, Mary loosened by her faith.” Comparing her with Eve, they call Mary “the Mother of the living” and frequently claim: “Death through Eve, life through Mary.” —Catechism of the Catholic Church, n. 494

Thus, the urgent question remains for us at this hour: will we too enter this Ark, this refuge whom God 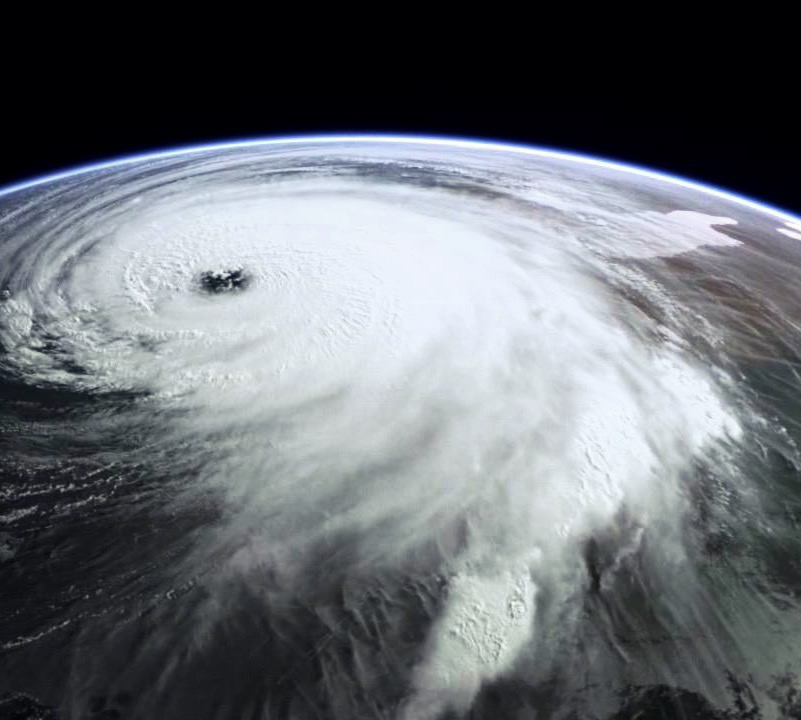 has given to us in the Great Storm to protect us from the deluge of satanic lies and torrents of apostasy that will drown the lukewarm, but which will sail Christ’s flock to an “era of peace”?

My Immaculate Heart will be your refuge and the way that will lead you to God. —Second apparition, June 13, 1917, The Revelation of the Two Hearts in Modern Times, www.ewtn.com

For God has given the Blessed Mother to us as a sure refuge and upper room where we can be formed, prepared, and filled with the Holy Spirit. But like Noah, we must respond to God’s invitation to enter into this Ark with our own fiat.

By faith Noah, warned about what was not yet seen, with reverence built an ark for the salvation of his household. Through this he condemned the world and inherited the righteousness that comes through faith. (Heb 11:7)

A simple way to “enter the Ark” is simply to acknowledge Mary’s motherhood, to give yourself over to it, and thus, give yourself more completely to Jesus who desires that she mother you. In the Church, we call this “consecration to Mary.” For a guide on how to do this, go to: [5]I recommend 33 Days to Morning Glory

The second thing you can do is pray the Rosary everyday, which is to meditate on the life of Jesus. I like to think of the Rosary beads as little “steps” that lead deeper and deeper into the Ark. In this way, walking with Mary and holding her hand, she can show you the safest and quickest paths to union with her Son, since she took it first herself. One can only understand what I mean by this by simply doing it, attentively and faithfully. [6]cf. Time to Get Serious God will do the rest. (It is no coincidence that many of the Church’s greatest saints were also Mary’s most devoted children).

At times when Christianity itself seemed under threat, its deliverance was attributed to the power of this prayer, and Our Lady of the Rosary was acclaimed as the one whose intercession brought salvation.  —POPE JOHN PAUL II, Rosarium Virginis Mariae, n. 39

The third thing is, as a sign of your belonging to Christ through her, is to wear the Brown Scapular [7]or Scapular Medal or 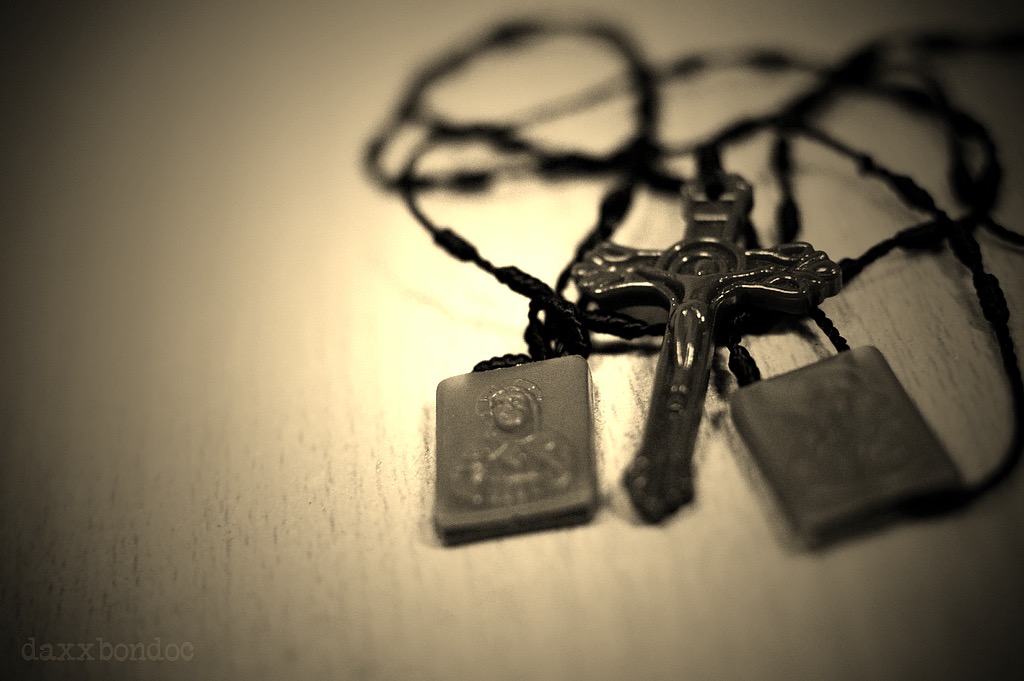 the Miraculous Medal, which promise special graces to those who wear them in fidelity to the Gospel. This is not to be confused with a “charm”, as though the objects themselves have an inherent power. Rather, they are “sacramentals” through which God communicates grace, in a similar way that people were healed by merely touching the tassles of Christ’s cloak in faith. [8]cf. Matt 14:36

There are, of course, other ways in which Our Mother invites us to participate in her Triumph, which is now entering its last stages: from certain prayers and devotions to fasting and communions of reparation. We should respond to these as the Holy Spirit leads us and Heaven requests. The central point is that you get on board the Ark that God has given us in this hour… as the powers of Hell continue to be unleashed in our world (see Hell Unleashed).

Let them implore also the powerful intercession of the Immaculate Virgin who, having crushed the head of the serpent of old, remains the sure protectress and invincible “Help of Christians.” —POPE PIUS XI, Divini Redemptoris, n. 59

A Refuge Has Been Prepared

Understanding the Urgency of Our Times

Posted in HOME, MARY, ALL.