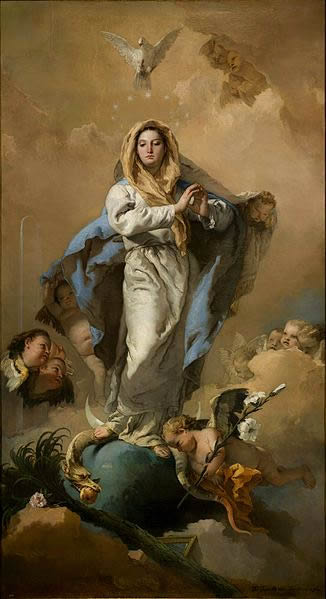 WHAT did you say? That Mary is the refuge that God is giving us in these times? [1]cf. The Rapture, the Ruse, and the Refuge

It sounds like heresy, doesn’t it. After all, isn’t Jesus our refuge? Isn’t He the “mediator” between man and God? Isn’t His the only name by which we are saved? Is He not the Savior of the world? Yes, all this is true. But how the Savior wishes to save us is a completely different matter. How the merits of the Cross are applied is an altogether mysterious, beautiful, and awesome unfolding story. It is within this application of our redemption that Mary finds her place as the crown of God’s masterplan in redemption, after Our Lord Himself.

THE BIG DEAL ABOUT MARY

The feeling of many Evangelical Christians is that Catholics not only make too big a deal out of Mary, but some believe we even worship her. And we must admit, at times, Catholics appear to give more attention to Mary than to her Son. Pope Francis likewise points out the need for proper balance when it comes to matters of our faith so that we do not…

Or more about Mary than Jesus, generally speaking. But it can also go the other way, that the significance of this Woman is harmfully downplayed. For Mary is as big a deal as Our Lord makes her.

Mary is often seen by evangelicals as just another New Testament figure who, although privileged to give birth to Jesus, has no further significance beyond the virgin birth. But this is to overlook not only the powerful symbolism but actual functionality of the Motherhood 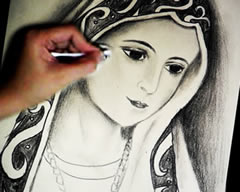 …the masterwork of the mission of the Son and the Spirit in the fullness of time. —Catechism of the Catholic Church (CCC), n. 721

Why is she “the masterwork of the mission” of God? Because Mary is a type and image of the Church herself, which is the Bride of Christ.

In her we contemplate what the Church already is in her mystery on her own “pilgrimage of faith,” and what she will be in the homeland at the end of her journey. —Catechism of the Catholic Church (CCC), n. 972

One could say that she is the incarnation of the Church itself insofar as her person became a literal “sacrament of salvation.” For it was through her that the Savior came into the world. In the same way, it is through the Church that Jesus comes to us in the Sacraments.

Thus [Mary] is a “preeminent and… wholly unique member of the Church”; indeed, she is the “exemplary realization” (typus) of the Church. —CCC, n. 967

But again, she is more than an icon of what the Church is, and is to be; she is, as it were, a parallel vessel of grace, acting beside and with the Church. One could say that, if the “institutional” Church distributes sacramental graces, Our Lady, through her role as mother and intercessor, acts as a distributor of charismatic graces.

The institutional and charismatic aspects are co-essential as it were to the Church’s constitution. They contribute, although differently, to the life, renewal and sanctification of God’s people. —ST. JOHN PAUL II, L’Osservatore Romano, June 3rd, 1998; reprinted in The Urgency of the New Evangelization: Answering the Call, by Ralph Martin, p. 41

I say that Mary is the “distributor” or, what the Catechism calls the “Mediatrix” [2]cf. CCC, n. 969 of these graces, precisely because of her motherhood assigned to her by Christ through her union with the Holy Spirit. [3]cf. John 19:26 Of herself, Mary is a creature. But united to the Spirit, she who is “full of grace” [4]cf. Luke 1:28 has 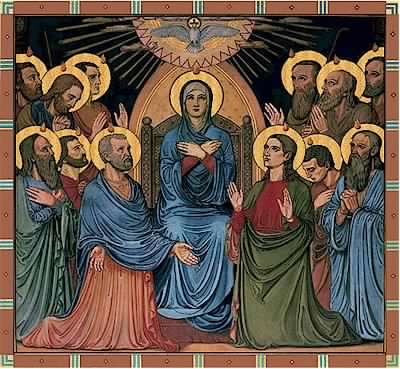 become an Immaculate dispenser of graces, foremost of which is the gift of her Son, Our Lord and Savior. So while “sacramental” graces come to the faithful through the sacramental priesthood, of which the Pope is its pre-eminent head after Christ, “charismatic” graces come about through the mystical priesthood, of which Mary is the pre-eminent head after Christ. She is the first “charismatic”, you could say! Mary was there, interceding for the infant Church at Pentecost.

Taken up to heaven she did not lay aside this saving office but by her manifold intercession continues to bring us the gifts of eternal salvation. —CCC, n. 969

Unity is of the essence of the Church: ‘What an astonishing mystery! There is one Father of the universe, one Logos of the universe, and also one Holy Spirit, everywhere one and the same; there is also one virgin become mother, and I should like to call her “Church.”‘ —St. Clement of Alexandria, cf. CCC, n. 813

IT’S IN THE BIBLE

Again, it is fundamentalism which has really done damage to these truths about Mary and even the Church itself. For the fundamentalist, there can be no glory except to God. This is true insofar as our worship of God alone: Father, Son, and Holy Spirit. But don’t believe the lie that God does not share His glory with the Church, that is, the operation of His saving power—and generously at that. For as St. Paul wrote, we are children of the Most High. And…

…if children, then heirs, heirs of God and joint heirs with Christ, if only we suffer with him so that we may also be glorified with him. (Rom 8:17)

And who suffered more than His own mother whom a “sword will pierce”? [7]Luke 2:35 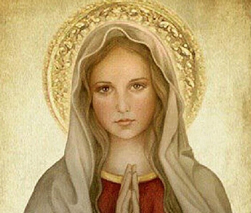 The early Christians began to understand that the Virgin Mary was the “new Eve” whom the book of Genesis called “mother of all the living.” [8]cf. Gen 3:20 As St. Irenaeus said, “Being obedient she became the cause of salvation for herself and for the whole human race,” undoing the disobedience of Eve. Thus, they assigned to Mary the new title: “the Mother of the living” and frequently said: “Death through Eve, life through Mary.” [9]Catechism of the Catholic Church, n. 494

Again, none of this ignores or overshadows the basic truth that the Holy Trinity is the principal source of all of Mary’s, and indeed, the whole Church’s glorious participation in the saving work of Christ. [10]see CCC, n. 970 So “Life through Mary,” yes, but the life we speak of is the life of Jesus Christ. Mary, then, is a privileged participant in bringing this life to the world. And so are we.

For example, St. Paul attributes to his own function as a bishop of the Church a certain “motherhood”:

My children, for whom I am again in labor until Christ be formed in you. (Gal 4:19)

Indeed, the Church has often been called “Mother Church” because of her spiritually maternal role. These words should not surprise us, for Mary and the Church are a mirror of one another, hence, they share in the “motherhood” of bringing the “whole Christ”—Christus totus—into the world. Thus we also read:

…the dragon became angry with the woman and went off to wage war against the rest of her offspring, those who keep God’s commandments and bear witness to Jesus. (Rev 12:17)

And will it surprise you then that both Mary and the Church share in the crushing of Satan’s head—not just Jesus? 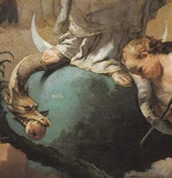 I will put enmity between you [Satan] and the woman… she shall crush thy head… Behold, I have given you the power ‘to tread upon serpents’ and scorpions and upon the full force of the enemy and nothing will harm you. (Gen 3:15 from the Latin; Luke 10:19)

I could go on with other Scriptures, but I have covered much of that ground already (see Related Reading below). The main purpose here is to understand why Mary is the refuge. The answer is because so is the Church. The two mirror each other.

Why then did the Blessed Mother declare at Fatima that her Immaculate Heart is our refuge? Because she mirrors, in her personal role, what the Church is in her motherhood: a refuge and rock. The Church is our refuge because, first of all, in her we find the infallible fullness of truth. Convert and American political advisor, Charlie Johnston, noted:

When I was in RCIA, I read voraciously — in truth, in the early weeks, trying to find the “catch” in Catholicism. I read about 30 dense books of theology and encyclicals and Church fathers in scarcely more than 30 days in this effort. I remember my sense of real wonder to discover that, even with some very miserable men occasionally holding the office of Pope, in 2000 years there had not been a doctrinal contradiction. I worked in politics — I could not name a large organization that had gone 10 years without a significant contradiction. That was a powerful sign to me that this surely was Christ’s vessel, not man’s.

Not only truth, but from the Catholic Church we also receive sanctifying grace in Baptism, forgiveness in Confession, the Holy Spirit in Confirmation, healing in Anointing, and the continual encounter of Jesus Christ in the Eucharist. Mary, as our Mother, also continually leads us in an intimate, personal, and mystical way to He who is the Way, the Truth, and the Life.

But why didn’t Our Mother say her Heart and the Church are to be our refuge in these times? Because the Church this past century since her apparitions in 1917 has undergone a terrible crisis. The faith has 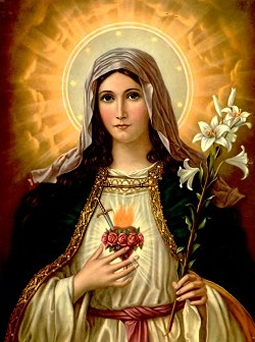 been all but lost in many places. The “smoke of satan” has entered the Church, said Paul VI. Error, apostasy, and confusion have spread everywhere. But curiously, through all of this—and this is only a subjective poll—I have met thousands of Catholics throughout North America, and I find that among souls who have an authentic devotion to Mary, the vast majority of them are faithful servants of Christ, His Church, and her teachings. Why? Because Our Lady is a refuge that protects and leads her children into the Truth and helps them deepen their love of Christ Jesus. I know this by experience. Never have I loved Jesus more than when I have also loved this Mother.

Our Lady is also our refuge in these times precisely because the Church is going to undergo a painful persecution throughout the entire world—and it is well underway in the Middle East. When there are no Sacraments available, when there are no buildings to pray in, when priests are hard to find… she will be our refuge. Likewise, when the Apostles had scattered and were in disarray, was she not the first one standing fast beneath the Cross to whom John and Mary Magdalene drew near? She will also be a refuge beneath the Cross of the Church’s passion. She, whom the Church also calls the “ark of the covenant”, [11]CCC, n. 2676 will also be our ark of safety.

But only so as to sail us into the Great Refuge and Safe Harbour of Christ’s love and mercy.

To also receive The Now Word,
Mark’s meditations on the Mass readings,
click on the banner below to subscribe.
Your email will not be shared with anyone.