THE NOW WORD ON MASS READINGS
for April 30th, 2014
Wednesday of the Second Week of Easter 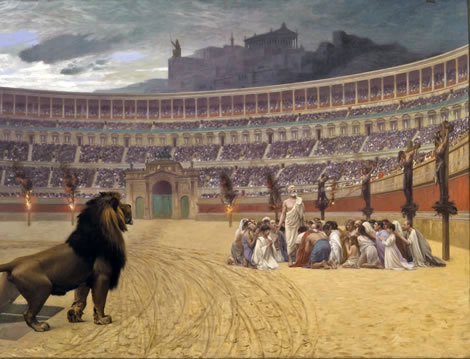 THE same Apostles who fled Gethsemane at the first rattle of chains now, not only defy the religious authorities, but go straight back into hostile territory to witness to the resurrection of Jesus.

The men whom you put in prison are in the temple area and are teaching the people. (First reading)

Chains that once were their shame now begin to weave a glorious crown. Where did this courage suddenly come from?

Of course, we know that the Day of Difference was Pentecost. But what drew down the Holy Spirit was when the body gathered as one, united with Mary, the mother of Jesus.

For where two or three are gathered together in my name, there am I in the midst of them. (Matt 18:20)

Countless times have I experienced this sacramental nature of Christian community, having founded one years ago with several other singers and musicians. Our ministry was to bring people into an encounter with Jesus through music and preaching the word of God, the undiluted Gospel:

God so loved the world that he gave his only-begotten Son, so that everyone who believes in him might not perish but might have eternal life. (Today’s Gospel)

By the grace of God, the Lord showed us that what was most important was not what we did so much, but who we are in Christ; that there are those who sing songs, and then those who become the Song itself. What we found in community, through the exchange of prayer, encouragement, fellowship, meditation on the Word of God, and participation in the Eucharist was a power and grace flowing among us. What we encountered was Jesus in the other.

The Christian faith… is not an ideology but a personal encounter with the Crucified and Risen Christ. From this experience, both individual and communitarian, flows a new way of thinking and acting: an existence marked by love is born. —BENEDICT XVI, Homily at Dio Padre Misericordioso, March 26th, 2006

This encounter of love, in turn, led to new gifts, new horizons, and new ministries being birthed that exist to this various day.

… the individual Christian experiences community and therefore senses that he or she is playing an active role and is encouraged to share in the common task. Thus, these communities become a means of evangelization and of the initial proclamation of the Gospel, and a source of new ministries. —ST. JOHN PAUL II, Redemptoris Missio, n. 51; vatican.va

The courage to face persecution is also birthed in community, for the Apostles knew that not only was the Spirit with them, but they were with each other, and Jesus, therefore, was also in their midst. Community led them to begin living with one foot in the next world, for authentic Christian community is already a taste of the heavenly community..

Taste and see how good the LORD is; blessed the man who takes refuge in him. (Today’s Psalm)

And we will find true refuge in authentic community, because there Christ is, wherever two or three are gathered in His name.