THE NOW WORD ON MASS READINGS
for May 1st, 2014
Thursday of the Second Week of Easter
St. Joseph the Worker 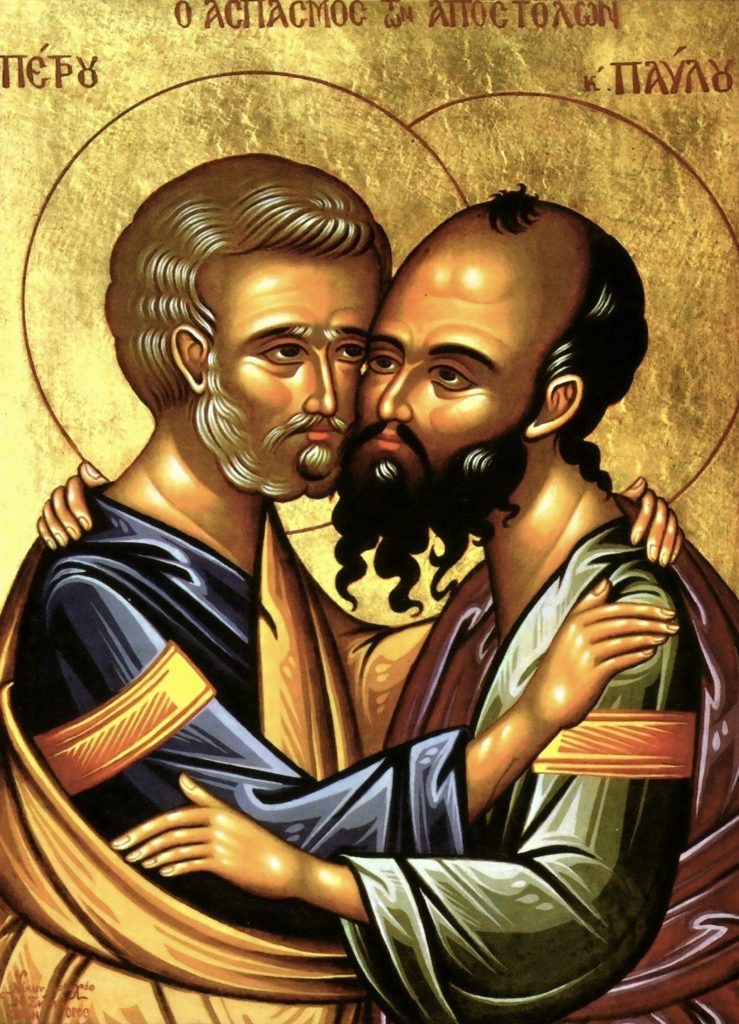 WHEN the Apostles are brought again before the Sanhedrin, they do not answer as individuals, but as a community.

We must obey God rather than men. (First reading)

This one sentence is loaded with implications. First, they say “we,” implying a fundamental unity between them. Second, it reveals that the Apostles were not following human tradition, but the Sacred Tradition that Jesus imparted to them. And last, it supports what we read earlier this week, that the first converts in turn were following the Apostles’ teaching, which was Christ’s.

They devoted themselves to the teaching of the Apostles and to the communal life, to the breaking of the bread and to the prayers. (Acts 2:42)

Likewise, today, authentic community is only authentically Christian insofar as it follows “the teaching of the Apostles.”

Every community, if it is to be Christian, must be founded on Christ and live in him, as it listens to the word of God, focuses its prayer on the Eucharist, lives in a communion marked by oneness of heart and soul, and shares according to the needs of its members (cf. Acts 2:42-47). As Pope Paul VI recalled, every community must live in union with the particular and the universal Church, in heartfelt communion with the Church’s pastors and the Magisterium, with a commitment to missionary outreach and without yielding to isolationism or ideological exploitation. —ST. JOHN PAUL II, Redemptoris Missio, n. 51

As Pope Francis said earlier this year, “It is an absurd dichotomy to love Christ without the Church; to listen to Christ, but not the Church; to be with Christ at the margins of the Church.” [1]cf. Homily, January 30th, 2014; ncr.com

You may recall my writing, The Coming Wave of Unity, in which I shared a word I received in prayer:

From the East, will spread like a wave, My ecumenical movement of unity… I will open doors that no one will shut; I will bring about in the hearts of all those I’m calling a unified witness of love… under one shepherd, one people—the final witness before all the nations.

That was confirmed for me later that day, quite dramatically, by that video in which Episcopal Bishop Tony Palmer plays a taped message of Pope Francis praying for unity. But before that, Palmer speaks to the crowd about returning to apostolic teaching, and goes so far as to say: “We are all Catholic now.” There you see the Holy Spirit at work, even if, for now, imperfectly on both sides of the ecumenical divide. As Jesus says in today’s Gospel:

For the one whom God sent speaks the words of God. He does not ration his gift of the Spirit.

Through the powerful intercession of Our Blessed Mother in these times, there is coming—and is already here—a new unrationed outpouring of the Spirit that will strengthen, purify, and unify the body of Christ. It is coming, an awakening by grace. And it will culminate in what St. John Paul II called ‘a new society based on a “civilization of love.”‘ [2]cf. Redemptoris Missio, n. 51

One Body in Christ, arisen from the last persecutions of this age.

Many are the troubles of the just man, but out of them all the LORD delivers him. (Today’s Psalm)

We implore [Mary’s] maternal intercession that the Church may become a home for many peoples, a mother for all peoples, and that the way may be opened to the birth of a new world. It is the Risen Christ who tells us, with a power that fills us with confidence and unshakeable hope: “Behold, I make all things new” (Rev 21:5). With Mary we advance confidently towards the fulfillment of this promise… —POPE FRANCIS, Evangelii Gaudium, n. 288