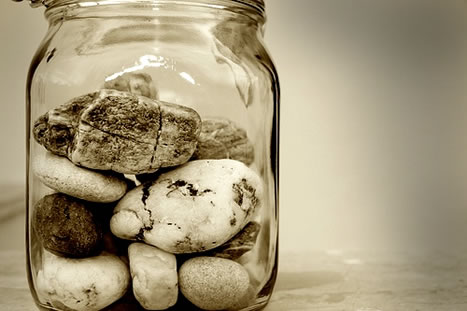 THINK of your heart as a glass jar. Your heart is made to contain the pure liquid of love, of God, who is love. But over time, so many of us fill our hearts with the love of things—inaminate objects that are as cold as stone. They cannot do anything for our hearts except to fill up those places that are reserved for God. And thus, many of us Christians are actually quite miserable… loaded down in debt, inner conflict, sadness… we have little to give because we ourselves are no longer receiving.

So many of us have stone cold hearts because we have filled them with the love of worldly things. And when the world encounters us, longing (whether they know it or not) for the “living water” of the Spirit, instead, we pour on their heads the cold stones of our greed, selfishness, and self-centeredness mixed with a tad of liquid religion. They hear our arguments, but notice our hypocrisy; they appreciate our reasoning, but do not detect our “reason for being”, which is Jesus. This is why the Holy Father has called us Christians to, once again, renounce worldliness, which is…

…the leprosy, the cancer of society and the cancer of the revelation of God and the enemy of Jesus. —POPE FRANCIS, Vatican Radio, October 4th, 2013

NEITHER GOOD NOR BAD

We have to be careful not to demonize material things, as if “not having” is somehow a sign of holiness. St. Francis de Sales once said,

So also you can possess riches without being poisoned by them if you merely keep them in your home and purse and not in your heart. —Introduction to the Devout Life, Part III, Ch. 11, p. 153

As many of you know from my last writing, The Franciscan Revolution, my wife and I, after a long period of discernment, have decided to “sell everything” and begin again in a deeper spirit of poverty and simplicity. To live within our means; to avoid the temptation to have the best, or upgrade to the next, or try and avoid discomfort. But when Jesus says, “sell everything,” we must understand this in the 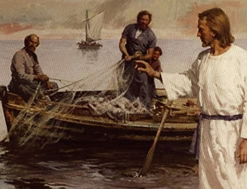 proper context. When he called the apostles to leave everything and follow him, they did not sell absolutely “everything.” They kept their clothes. Peter even kept his boat. That is, those things still necessary to live and to build the Kingdom of God do not necessarily need to be sold, only to turn around and buy them again precisely because they are needed. Common sense is also a gift from God.

Rather, Jesus is calling for a radical renunciation of the world, of worldliness. And neither was He flippant about this. Just as a builder counts the cost before he builds, so too, Jesus said, must his disciples realize that they are called to build His Kingdom—not their own.

In the same way, everyone of you who does not renounce all his possessions cannot be my disciple. (Luke 14:33)

We truly have to get off this horrible rushing train that modern society is, that pushes and pulls us to buy the next best thing, and re-examine our lives. We need to “count the cost”: am I living for and building my own kingdom, or the Kingdom of God?

For whoever wishes to save his life will lose it, but whoever loses his life for my sake and that of the Gospel will save it. What profit is there for one to gain the whole world and forfeit his life. (Mark 8:235-36)

The Church is all of us and we all have to strip ourselves of this worldliness. Worldliness does us harm. It is so sad to find a worldly Christian… Our Lord told us: We cannot serve two masters: either we serve money or we serve God.…We can’t cancel with one hand what we write with another. —POPE FRANCIS, Vatican Radio, October 4th, 2013

A SPIRIT THAT KILLS

Yes, it is no small thing. Many Catholics are upset today because the Holy Father is telling them to focus on the basics as the first priority, rather than the major cultural issues at hand. The reason is quite clear: we no longer hold credibility in the eyes of the world. Who is really listening to the Catholic Church? Our abortion and divorce rates aren’t much different than the world’s; most Catholics use contraception; and we are among the lowest givers in the collection basket in all of Christendom. Even many of our religious orders have shunned the powerful outward sign of their radical choice for Jesus, and exchanged their habits and collars for pant suits and t-shirts. Catholicism at times appears to be another club, another weekly meeting, that really makes little difference in one’s life or the lives of others around them.

What thirsting souls really long for today is an encounter with Jesus, not apologetics or philosophical persuasion. These are necessary, but do not replace the basic truth that every single baptized Christian is 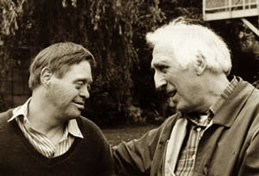 to become a carrier of Christ; a dispenser of the liquid love of God. This means a soul who is on fire for God; who lives for the next world while living in the present; whose heart is not only concerned about the soul of another, but about their happiness and well-being. Ah! When we meet such Christians, we want to drink from their hearts because they offer up a Liquid that is not of this world. They look us in the eye and love us, even though they know our sin! This is the power of love, of God’s love.

Peter looked intently at him, as did John, and said, “Look at us.” …Peter said, “I have neither silver nor gold, but what I do have I give you: in the name of Jesus Christ the Nazorean, rise and walk.” (Acts 3:4-6)

But it is precisely because the Church has become worldly, nearly incapable of offering this Living Water, that our witness is so sterile. We have now become a Church that in many ways is only capable of offering real silver and gold, rather than the precious liquid of God’s love. 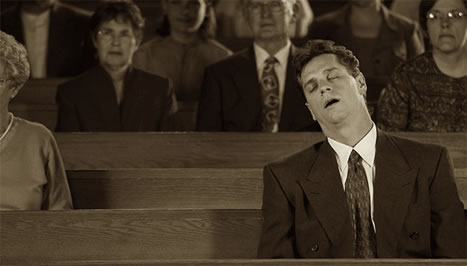 A visit to your average Catholic Church today in the Western world quickly tells the story of congregation after congregation who are comfortable, but joyless; well-off, but really not that well spiritually. We are worried and anxious about many things, just like the rest of the world. And thus, the witness of the Church has become impotent and unbelievable.

St. James explains it this way:

Where do the wars and where do the conflicts among you come from? Is it not from your passions that make war within your members? You covet but do not possess. You kill and envy but you cannot obtain; you fight and wage war. You do not possess because you do not ask. You ask but do not receive, because you ask wrongly, to spend it on your passions. Adulterers! Do you not know that to be a lover of the world means enmity with God? Therefore, whoever wants to be a lover of the world makes himself an enemy of God. (James 4:1)

We ask wrongly, he says. That is, we pursue “stuff” for its own sake, for reasons often, says the Pope, of “vanity, arrogance, and pride.” We turn things into idols. How we laugh at the Israelites for worshipping a golden calf—and then turn around and stare endlessly at LCD screens and smartphones, if not sleep with them. This is the kind of worldliness that must be shunned. However, says St. John of the Cross, it is not a matter of never buying, but never buying into the spirit of the world.

…we are not discussing the mere lack of things; this lack will not divest the soul if it craves for all these objects. We are dealing with the denudation of the soul’s appetites and gratifications. This is what leaves it free and empty of all things, even though it possesses them. —St. John of the Cross, Ascent of Mount Carmel, Book I, Ch. 3, p. 123

Free to be filled with the liquid of God. And thus, said St Paul,

I know indeed how to live in humble circumstances; I know also how to live with abundance. In every circumstance and in all things I have learned the secret of being well fed and of going hungry, of living in abundance and of being in need. I have the strength for everything through him who empowers me. (Phil 4:12-13)

We have to re-learn the secret: to use everything toward bringing ourselves and others to union with God, whether it is a silver fork or plastic. We can only do this by putting childlike trust in the Father that whatevever we need, whether it’s a Cadillac or a compact car, that He will provide it. But also settling for the latter when we don’t need the former.

Let your life be free from love of money but be content with what you have, for he has said, “I will never forsake you or abandon you.” (Heb 13:5)

I want to share with you a song from my new album about trying to see things the way St. Paul did… that essentially, material things “don’t mean nothin'” compared to the love of God, and the love of others. May we, like St. Paul, begin to see things for what they really are.

I even consider everything as a loss because of the supreme good of knowing Christ Jesus my Lord. For his sake I have accepted the loss of all things and I consider them so much rubbish, that I may gain Christ and be found in him… (Phil 3:8-9)

We continue to climb toward the goal of 1000 people donating $10/month and are about 65% of the way there.
Thanks for your support of this full time ministry.