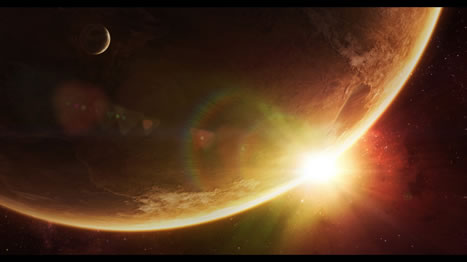 WHAT does the future hold? That’s a question nearly everyone is asking these days as they watch the unprecedented “signs of the times.” This is what Jesus said to St. Faustina:

Speak to the world about My mercy; let all mankind recognize My unfathomable mercy. It is a sign for the end times; after it will come the day of justice. —Jesus to St. Faustina, Divine Mercy in My Soul, Diary, n. 848

And again, He says to her:

You will prepare the world for My final coming. —Jesus to St. Faustina, Divine Mercy in My Soul, Diary, n. 429

At first glance, it would appear that the message of Divine Mercy is preparing us for the imminent return of Jesus in glory and the end of the world. When asked if this is what St. Faustina’s words meant, Pope Benedict XVI answered:

If one took this statement in a chronological sense, as an injunction to get ready, as it were, immediately for the Second Coming, it would be false. —POPE BENEDICT XVI, Light of the World, A Conversation with Peter Seewald, p. 180-181

The answer lies in understanding what is meant by “the day of justice,” or what is commonly referred to as “the Day of the Lord”…

NOT A SOLAR DAY

The Day of the Lord is understood to be the “day” that heralds in Christ’s return. However, this Day is not to be understood as a 24 hour solar day.

…this day of ours, which is bounded by the rising and the setting of the sun, is a representation of that great day to which the circuit of a thousand years affixes its limits. —Lactantius, Fathers of the Church: The Divine Institutes, Book VII, Chapter 14, Catholic Encyclopedia; www.newadvent.org

The early Church Fathers understood the Day of the Lord to be an extended period of time as symbolized by the number “a thousand.” 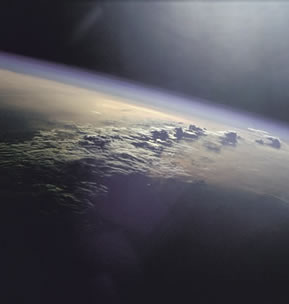 The Church Fathers drew their theology of the Day of the Lord in part from the “six days” of creation. As God rested on the seventh day, they believed that the Church too would have a rest, as St. Paul taught:

…a sabbath rest still remains for the people of God. And whoever enters into God’s rest, rests from his own works as God did from his. (Heb 4:9-10)

Many in apostolic times expected the imminent return of Jesus as well. However, St. Peter, perceiving that God’s patience and plans are much broader than anyone realized, wrote:

The Church Fathers applied this theology to Revelation Chapter 20, when the “beast and false prophet” are slain and cast into the lake of fire, and Satan’s power is chained for a time:

Then I saw an angel come down from heaven, holding in his hand the key to the abyss and a heavy chain. He seized the dragon, the ancient serpent, which is the Devil or Satan, and tied it up for a thousand years… so that it could no longer lead the nations astray until the thousand years are completed. After this, it is to be released for a short time… I also saw the souls of those who… came to life and they reigned with Christ for a thousand years. (Rev 20:1-4)

Both Old and New Testament Scriptures attest to a coming “period of peace” on earth whereby justice would establish God’s kingdom to the ends of the earth, pacifying the nations, and carrying the Gospel to the furthest coastlands. But before that, the earth would 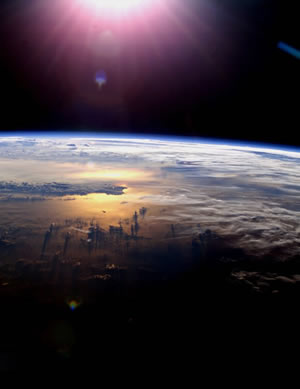 necessarily need to be purified of all wickedness—embodied in the person of Antichrist—and afterward be granted a time of rest, what the Church Fathers referred to as the “seventh day” of rest before the end of the world.

And as God laboured during those six days in creating such great works, so His religion and truth must labour during these six thousand years, while wickedness prevails and bears rule. And again, since God, having finished His works, rested the seventh day and blessed it, at the end of the six thousandth year all wickedness must be abolished from the earth, and righteousness reign for a thousand years; and there must be tranquillity and rest from the labours which the world now has long endured.—Caecilius Firmianus Lactantius (250-317 A.D.; Ecclesiastical writer), The Divine Institutes, Vol 7

The hour has come when the message of Divine Mercy is able to fill hearts with hope and to become the spark of a new civilization: the civilization of love. —POPE JOHN PAUL II, Homily, August 18th, 2002

THE JUDGMENT THAT COMES…

We recite in the Apostle’s Creed:

He will come again to judge the living and the dead.

Thus, we can now better understand what Faustina’s revelations are referring to. What the Church and the world are approaching now is the judgement of the living that takes place before the era of peace. Indeed, we read in Revelation that the Antichrist, and all who take the mark of the beast, are removed from the face of the earth. [1]cf. Rev 19:19-21 This is followed by the reign of Christ in His saints (the “thousand years”). St. John then writes of the judgment of the dead. 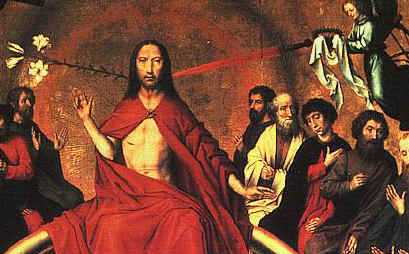 When the thousand years are completed, Satan will be released from his prison. He will go out to deceive the nations at the four corners of the earth, Gog and Magog, to gather them for battle… But fire came down from heaven and consumed them. The Devil who had led them astray was thrown into the pool of fire and sulfur, where the beast and the false prophet were… Next I saw a large white throne and the one who was sitting on it… The dead were judged according to their deeds, by what was written in the scrolls. The sea gave up its dead; then Death and Hades gave up their dead. All the dead were judged according to their deeds. (Rev 20:7-14)

…we understand that a period of one thousand years is indicated in symbolic language… A man among us named John, one of Christ’s Apostles, received and foretold that the followers of Christ would dwell in Jerusalem for a thousand years, and that afterwards the universal and, in short, everlasting resurrection and judgment would take place. —St. Justin Martyr, Dialogue with Trypho, The Fathers of the Church, Christian Heritage

These judgments, then, are really one—it’s just that they occur at different times within the Day of the Lord. Thus, the Day of the Lord leads us to, and prepares us for, the “final coming” of Jesus. How? The purification of the world, the Passion of the Church, and the outpouring of the Holy Spirit that are coming will prepare a “spotless” Bride for Jesus. As St. Paul writes:

Christ loved the church and handed himself over for her to sanctify her, cleansing her by the bath of water with the word, that he might present to himself the church in splendor, without spot or wrinkle or any such thing, that she might be holy and without blemish. (Eph 5:25-27)

In summary, the Day of the Lord, according to the Church Fathers, looks something like this:

The growing period of darkness and apostasy when the light of truth goes out in the world. 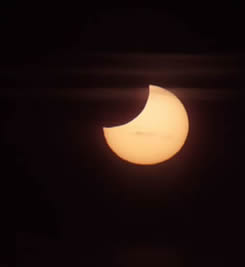 The darkest part of the night when twilight is embodied in the Antichrist, who is also an instrument to purify the world: the judgment, in part, of the living.

The brightness of the dawn [2]“then that wicked one shall be revealed whom the Lord Jesus shall kill with the spirit of his mouth; and shall destroy with the brightness of his coming…” (2 Thess 2:8 scatters the darkness, putting an end to the infernal darkness of Antichrist’s brief reign.

The reign of justice and peace to the ends of the earth. It is the realization of the “Triumph of the Immaculate Heart”, and the fullness of the Eucharistic reign of Jesus throughout the world.

The release of Satan from the abyss, and the last rebellion.

Midnight… beginning of the Eternal Day

Jesus returns in glory to end all wickedness, judge the dead, and establish the everlasting and eternal “eighth day” under a “new heavens and a new earth.”

“And they shall hear my voice, and there shall be one fold and one shepherd.” May God… shortly bring to fulfillment His prophecy for transforming this consoling vision of the future into a present reality… 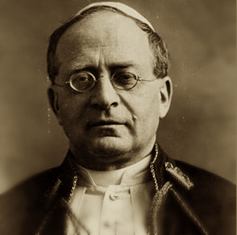 It is God’s task to bring about this happy hour and to make it known to all… When it does arrive, it will turn out to be a solemn hour, one big with consequences not only for the restoration of the Kingdom of Christ, but for the pacification of… the world. We pray most fervently, and ask others likewise to pray for this much-desired pacification of society. —POPE PIUS XI, Ubi Arcani dei Consilioi “On the Peace of Christ in his Kingdom”, December 23, 1922

Wait a minute—is this not the heresy of “millenarianism” above? Read: How the Era was Lost…

Have the popes spoken of an “era of peace?” Read: The Popes, and the Dawning Era

If these are the “end times”, why aren’t the popes saying anything about it? Read: Why Aren’t the Popes Shouting?

Is the “judgment of the living” near or far away? Read: The Seven Seals of Revolution and The Hour of the Sword

What happens after the so-called Illumination or Sixth Seal of Revelation? Read: After the Illumination

Please comment further on this “Illumination.” Read: The Eye of the Storm and Revelation Illumination

Someone said I should be “consecrated to Mary”, and that she is the door to the safe refuge of Jesus’s heart in these times? What does that mean? Read: The Great Gift

If Antichrist devastates the world, how will Christians live in it in during a period of peace? Read: Creation Reborn

Could you explain in more detail the judgment of the “living and the dead”? Read: The Last Judgments and Two More Days.

Is there any truth to the so-called “three days of darkness”? Read: Three Days of Darkness

St. John speaks of a “first resurrection”. Could you explain that? Read: The Coming Resurrection

Could you explain to me more about the “door of mercy” and the “door of justice” that St. Faustina speaks about? Read: The Doors of Faustina

This ministry is experiencing a financial shortfall
in these tough economic times.
Thanks for considering support of our ministry