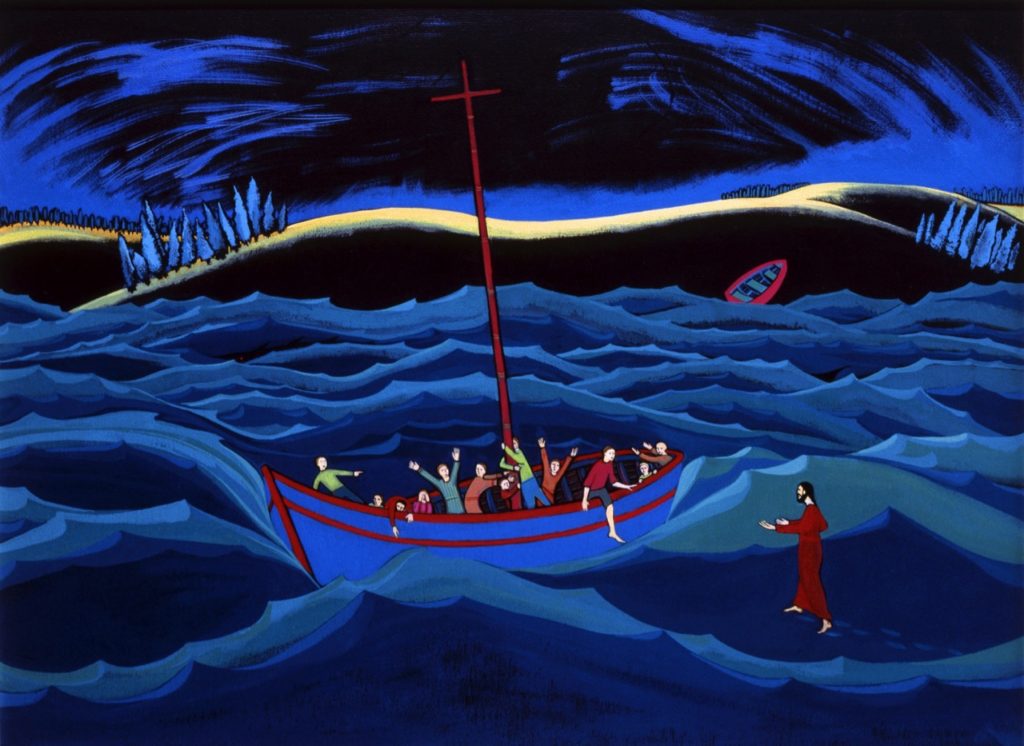 THERE is an underlying theme I try to weave throughout all the aspects of my ministry: Be not afraid! For it carries within it the seeds of both reality and hope:

We cannot hide the fact that many threatening clouds are gathering on the horizon. We must not, however, lose heart, rather we must keep the flame of hope alive in our hearts… —POPE BENEDICT XVI, Catholic News Agency, January 15th, 2009

In terms of my writing apostolate, I have spent the past 12 years striving to help you face this gathering Storm precisely in order that you may not be afraid. I have spoken about the uncomfortable realities of our times rather than pretending that everything is flowers and rainbows. And I have spoken over and over again about God’s plan, a future of hope for the Church after the trials which she now faces. I have not ignored the labor pains while at the same time reminding you of the New Birth coming, as understood in the voice of Tradition. [1]cf. The Popes, and the Dawning Era and What If…? As we read in today’s Psalm:

In the past two years, the “mountains” of confidence have been toppled in some as one alleged prediction after another has failed to come to pass by certain “seers” and “visionaries.” [2]cf.  Turn on the Headlights One such prediction was by an American, Charlie Johnston, who said that, according to his “angel”, the next president of the United States would not come through the normal electoral process and that Obama would remain in power. For my part, I have explicitly warned my readers against banking too much on specific predictions like these, including Charlie’s (see On Discernment of the Details). God’s mercy is fluid and, like a good father, He does not treat us according to our sins, especially when we repent. That can change the course of the future in an instant. Still, if a seer feels in good conscience that God is asking them to make such predictions public, then that’s their business; it’s between them, their spiritual director, and God (and they must also be responsible for the fallout, either way). However, make no mistake: the negative fallout from these sometimes rash predictions affects every one of us in the Church who are trying to promote the authentic revelations that Our Lord and Lady want us to hear in these times. In that regard, I wholeheartedly agree with Archbishop Rino Fisichella who said,

All this said, I have been asked by some readers to clarify my position on Charlie since I not only mentioned him a few times in my writings, but appeared on the same stage with him at an event in Covington, LA in 2015. People have automatically assumed that, as such, I must therefore endorse his prophecies. Rather, what I endorse is the teaching of St. Paul:

Do not despise prophetic utterances. Test everything; retain what is good. (1 Thess 5:20-21)

Charlie’s spiritual director, a priest in good standing, suggested that he contact me three years ago because we were both speaking of a coming “Storm”. This is, after all, what Pope Benedict said above, as well as St. John Paul II:

It is precisely at the end of the second millennium that immense, threatening clouds converge on the horizon of all humanity and darkness descends upon human souls. —POPE JOHN PAUL II, from a speech, December, 1983; www.vatican.va

In the approved revelations of Elizabeth Kindelmann and the writings of Fr. Gobbi, which bear the Imprimatur, they also speak of a coming “Storm” upon humanity. Nothing new here, really. So I agreed with Charlie’s statement that a great “Storm” is coming.

But how that “Storm” unfolds is another matter. At the conference in Covington, I specifically stated that I could not endorse Charlie’s prophecies [3]see 1:16:03 in this video link: https://www.youtube.com/watch?v=723VzPxwMms but that I appreciated his spirit and faithfulness to Sacred Tradition. It was also very interesting to have an open Q & A with those at the Covington event where we shared our respective viewpoints. In Charlie’s own words:

One need not agree with all—or even most—of my supernatural claims to welcome me as a fellow worker in the vineyard. Acknowledge God, take the next right step, and be a sign of hope to those around you. That is the sum of my message. All else is explanatory detail. — “My New Pilgrimage”, August 2nd, 2015; from The Next Right Step

In this case, prediction of the future is of secondary importance. What is essential is the actualization of the definitive Revelation. —Cardinal Ratzinger (POPE BENEDICT XVI), Message of Fatima, Theological Commentary, www.vatican.va

All this said, last May, I began to see that many were still assuming that I endorsed everything Charlie was saying. I might point out, however, that I have shared the podium with several alleged mystics and seers over the years, but none who were condemned by their local ordinary or who taught anything contrary to the Catholic faith. A few years back, I also shared the stage with Michael Coren, a Catholic convert and author who has subsequently apostasized. I think most people understand that I am not responsible for what others say and do simply because I spoke at the same event as them.

Nonetheless, last May in Fear, Fire, and the Rescue?, I pointed out the Archbishop of Denver’s preliminary assessment of Charlie’s messages and his statement that…

…the archdiocese encourages [souls] to seek their security in Jesus Christ, the Sacraments, and the Scriptures. —Archbishop Sam Aquila, statement from the Archdiocese of Denver, March 1st, 2016; www.archden.org

At the same time, I felt obligated to address the significant differences that were emerging between my writings and Charlie’s. In The Coming Judgment, I noted the Archbishop’s warning for “prudence and caution” regarding Charlie’s alleged prophecies, and went on further to reiterate the eschatological vision of the Church Father’s that differs from what Charlie and some other mainstream eschatologists are proposing. In Is Jesus Really Coming?, I pulled together what is a “prophetic consensus” of 2000 years of Tradition and modern prophecy that paints an unmistakable picture of the horizon.

Since Charlie’s failed prediction, the Archdiocese of Denver issued another statement:

The events of 2016/17 have shown that Mr. Johnston’s alleged visions were not accurate and the Archdiocese urges the faithful not to condone or support further attempts to reinterpret them as valid. —Archdiocese of Denver, Press Release, Feb. 15th, 2017; archden.org

That is my position too, of course, and hopefully every faithful Catholics’. Again, I draw my readers’ attention to the wisdom of St. Hannibal:

How many contradictions we see between Saint Brigitte, Mary of Agreda, Catherine Emmerich, etc. We cannot consider the revelations and the locutions as words of Scripture. Some of them must be omitted, and others explained in a right, prudent meaning. —St. Hannibal Maria di Francia, letter to Bishop Liviero of Città di Castello, 1925 (emphasis mine)

…people cannot deal with private revelations as if they were canonical books or decrees of the Holy See. Even the most enlightened persons, especially women, may be greatly mistaken in the visions, revelations, locutions, and inspiration. More than once the divine operation is restrained by human nature… to consider any expression of the private revelations as dogma or propositions near of faith is always imprudent! —a letter to Fr. Peter Bergamaschi

I hope this clarifies for readers where I stand in regards to the specific prophecies of any seer or visionary, no matter how great in stature, level of approval, or otherwise.

I also hope that the “inquistional” bearing of some Catholics would give way to a more merciful, calm, and mature approach to prophecy which—like it or not—is part of the life of the Church. If we follow Church teaching, live by it, and discern prophecy always in this context, there truly is nothing to be afraid of, even when it comes to prophecies that are specific. If they do not pass the test of orthodoxy, they must be disregarded. But if they do, then, we simply watch and pray and get on with the business of being faithful servants in the daily duties of our vocation.

Many are asking me what I think about the confluence of the 100th year anniversary of Fatima and other such “date” markers in 2017. Again, I don’t know! It could be significant… or not at all. I hope people will understand when I say, “Does it really matter?” What matters are two things: that every day, we place ourselves in a state of grace by recourse to God’s mercy and love so that we are always ready to meet Him at any moment. And second, that we co-operate with His will in the salvation of souls by responding to His personal plan for our lives. Neither of these obligations suggests ignorance of the “signs of the times,” but rather, should strengthen our response to them.

Turn on the Headlights

Bless you and thanks to all
for your support of this ministry!