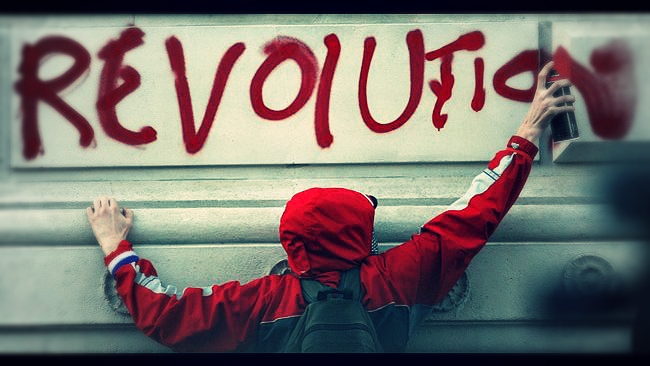 THERE is the equivalent of a socio-political earthquake underway, a Global Revolution that is disturbing the nations and polarizing peoples. To see it unfolding in real-time now speaks of how close the world is to great upheaval.

The polarization of ideologies could not be more stark. In Europe, some politicians have thrown wide open the doors to “refugees,” while other politicians are rising to power to close them just as quickly. In France, the socialist government is moving to penalize with a two year prison sentence and up to 30,000 euros in fines anyone who would “deliberately mislead, intimidate and/or exert psychological or moral pressure to discourage recourse to 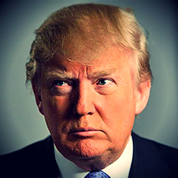 abortion.”  [1]cf. LifeSiteNews, December 1st, 2016 Across the ocean, however, President-Elect Trump has promised to install pro-life Supreme Court judges to repeal Roe vs. Wade (which ushered in the era of abortion and the extermination of hundreds of millions of people in that country). In Canada, Justin Trudeau—who has praised the dictatorships of both China and Cuba—became the first 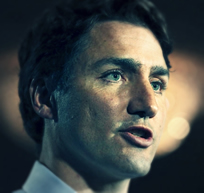 Prime Minister to participate in a gay Pride parade, celebrating the autonomy of the individual over nature and reason… while Poland’s President recently joined the country’s bishops in placing the nation under the reign of Jesus Christ “Immortal King of the Ages.” [2]National Catholic Register, Nov. 25th, 2016

It is a battle for the soul of nations. It is the fulfillment of the prophetic words of John Paul II, spoken shortly before he became Pope:

We are now facing the final confrontation between the Church and the anti-Church, of the Gospel versus the anti-Gospel, Christ versus the antichrist. This confrontation lies within the plans of divine Providence; it is a trial which the whole Church, and the Polish Church in particular, must take up. It is a trial of not only our nation and the Church, but in a sense a test of 2,000 years of culture and Christian civilization, with all of its consequences for human dignity, individual rights, human rights and the rights of nations. —Cardinal Karol Wojtyla (POPE JOHN PAUL II ), at the Eucharistic Congress, Philadelphia, PA; August 13, 1976

As one nation completely abandons its Christian roots and another affirms them; as one throws opens its borders while nationalism rises in another; while one country embraces godless humanism and another rejects it… the ideological divisions between nations are coming to a head as globalization naturally leads toward a global head. [3]cf. Benedict and the New World Order Thus, is also being fulfilled the prophetic warning of Pius XI on March 19th, 1937:

Nor has the ancient tempter ever ceased to deceive mankind with false promises. It is on this account that one convulsion following upon another has marked the passage of the centuries, down to the revolution of our own days. This modern revolution, it may be said, has actually broken out or threatens everywhere, and it exceeds in amplitude and violence anything yet experienced in the preceding persecutions launched against the Church. Entire peoples find themselves in danger of falling back into a barbarism worse than that which oppressed the greater part of the world at the coming of the Redeemer. —On Atheistic Communism, Divini Redemptoris, n. 2, papalencyclcals.net

I want to say again, without hesitation, that with the rapid acceleration of globalization and a United Nations hell-bent on subverting the values of the 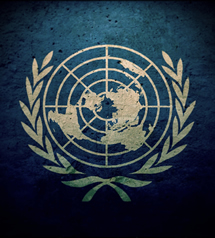 Gospel, there is a real danger today that, with the right crisis and desperate circumstances, many will look toward human systems for spiritual solutions—and this while the Catholic Church is undergoing her own crises. Unfortunately, any talk today of an “antichrist” is met with chuckles or disbelief (see Antichrist in Our Times). Indeed, too many cartoon-like caricatures of the “son of perdition” have made any notion of a diabolical world leader seem far-fetched—that, and a stream of short-sighted and rigid eschatology that dangerously relegates the antichrist to the very end of the world while ignoring the clear warnings and “signs of the times” enunciated by the popes, and confirmed in approved prophetic revelations (see Why Aren’t the Popes Shouting? and Is Jesus Really Coming?).

Far-fetched? Look how many Cubans cried over the death of dictator Fidel Castro! Look how many Venezuelans called socialist leader Chavez “father”! Look how many North Koreans weep as Communist Supreme Leader Kim 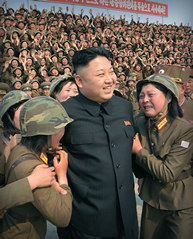 Yong-un walks by! How many wept and declared Obama to be a “savior” and type of “Moses”, even comparing him to “Jesus”? [4]cf. Warnings from the Past In Obama’s first term, long-time Newsweek veteran Evan Thomas said, “In a way, Obama’s standing above the country, above—above the world. He’s sort of God. He’s going to bring all different sides together.” [5]Washington Examiner, Jan. 19th, 2013 How many are now looking to Donald Trump to “make America great again”? Only God can make our nations great when we put Him, and the Gospel, at the center of our hearts. Otherwise, we are left with nothing but shattered dreams.

The persecution that accompanies [the Church’s] pilgrimage on earth will unveil the “mystery of iniquity” in the form of a religious deception offering men an apparent solution to their problems at the price of apostasy from the truth. The supreme religious deception is that of the Antichrist, a pseudo-messianism by which man glorifies himself in place of God and of his Messiah come in the flesh… The Church has rejected even modified forms of this falsification of the kingdom to come under the name of millenarianism, especially the “intrinsically perverse” political form of a secular messianism.—Catechism of the Catholic Church, n. 675-676

A REVOLUTION OF THE HEART

None of what is described above is a surprise to those familiar with the words of Our Lady of Fatima who warned of the degeneration of the nations. Or of Our Lady of Rwanda who warned that the genocide there was not a mere local event, but a warning to a world of the consequences of forgetting her Son (see Warnings in the Wind). Her remedy? For individuals to convert and return to Jesus.

As in all the stormy periods of the history of the Church, the fundamental remedy today lies in a sincere renewal of private and public life according to the principles of the Gospel by all those who belong to the Fold of Christ, that they may be in truth the salt of the earth to preserve human society from total corruption. —POPE PIUS XI, On Atheistic Communism, Divini Redemptoris, n. 41, papalencyclcals.net 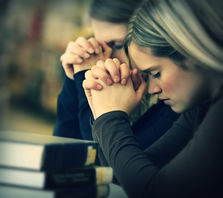 university students, cut to the heart of the matter: what is needed most today is a revolution of the heart.

My sons and daughters, you have pointed out… the sufferings and the contradictions by which a society is seen to be overwhelmed when it moves away from God. The wisdom of Christ makes you capable of pushing on to discover the deepest source of evil existing in the world. And it also stimulates you to proclaim to all men, your companions in study today, and in work tomorrow, the truth you have learned from the Master’s lips, that is, that evil comes “out of the heart of man” (Mk 7:21). So sociological analyses are not enough to bring justice and peace. The root of evil is within man. The remedy, therefore, also starts from the heart. —POPE JOHN PAUL II to an International Congress, April 10th, 1979; vatican.va

Even just one heart, converted totally to God, can be a radiant beacon piercing the darkness of many souls. Just one heart, filled with the Divine life, can be the salt that preserves the life a community. Just one heart, living in the Divine Will, can blind and render powerless the prince of darkness. Satan once said to St. John Vianney: “If there were three such priests as you, my kingdom would be ruined!”

Can we not look to the model of Our Lord who, while speaking at times to multitudes, chose only a handful of men to lay the foundations of the future? This is why Our Lady, though grieved, is not panicking because billions aren’t converting to Jesus. Rather, she speaks to the few who listen—as though she 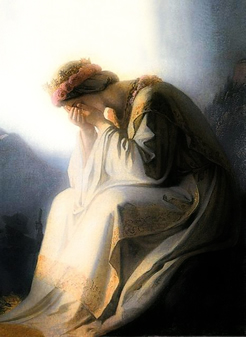 were Gideon leading that tiny army of 300 hundred men. [6]cf. The New Gideon Because, through a handful of genuine apostles, the Flame of her Love can burn until it begins to spread like a wildfire. And so she pleads that the few who are listening, who are still awake, would persevere in this revolution of the heart.

Dear children, my motherly heart is crying as I am looking at what my children are doing. Sins are multiplying, the purity of soul is all the less important; my Son is being forgotten — honored all the less; and my children are being persecuted. That is why, you my children, apostles of my love, with soul and heart invoke the name of my Son. He will have the words of light for you. He manifests Himself to you, He breaks the bread with you and gives you the words of love so that you may transform them into merciful acts and, thus, be witnesses of truth. That is why, my children, do not be afraid. Permit my Son to be in you. He will make use of you to care for the wounded and to convert lost souls. Therefore, my children, return to the prayer of the Rosary. Pray it with feelings of goodness, sacrifice and mercy. Pray, not only with words, but with merciful acts. Pray with love for all people. My Son, by His sacrifice, exalted love. Therefore, live with Him so that you may have strength and hope; that you may have the love which is life and which leads to eternal life. Through God’s love, I am also with you, and will lead you with motherly love. Thank you. —Our Lady allegedly to Medjugorje seer, Mirjana; December 2, 2016

The urgent answer to the rapid degeneration of the nations is not a political one, but spiritual. Even though socialism and communism have proven themselves to be wicked instruments of oppression, capitalism has also shown its gruesome underbelly when the gods of money, comfort, and materialism are raised upon the altars of men’s hearts as the new “golden calves.”

It is this blossoming that Our Lady is calling us to prepare for by a revolution of the heart. In these remaining days of Advent, I pray that Our Lord and Lady will give us the “words of light” necessary to gain not only the wisdom necessary to navigate these turbulent times, but above all, to lead you and I to a deeper and authentic conversion… that Christ may truly reign in our hearts.

Bless you and thank you for your support.