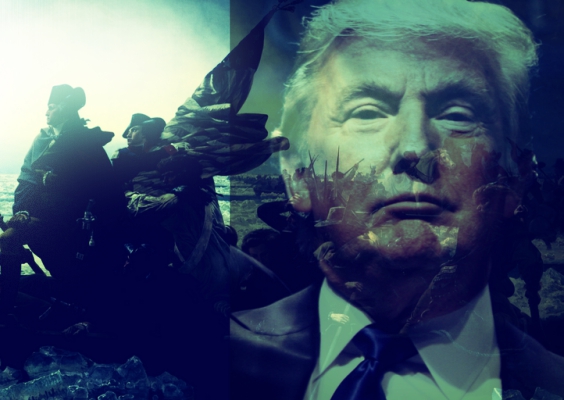 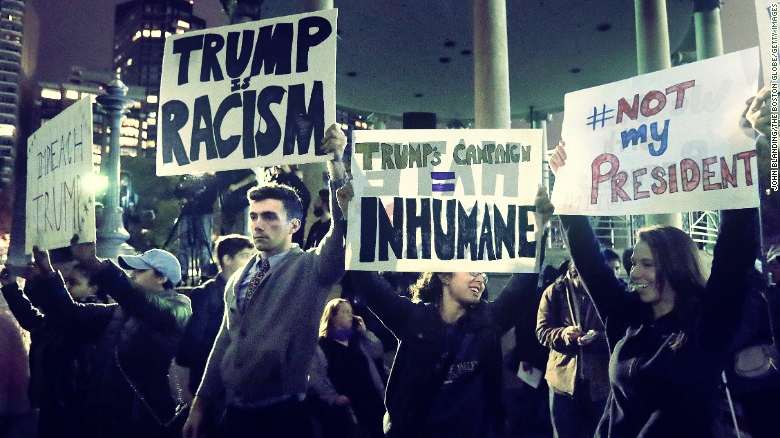 Photo by John Blanding courtesy of The Boston Globe/Getty Images

This wasn’t an election. It was a revolution… Midnight has passed. A new day has come. And everything is about to change.
—Daniel Greenfield from “America Rising”, November 9th, 2016; Israelrisiing.com

OR is it about to change, and for the better?

Many Christians in the United States are celebrating today, celebrating as if the “midnight has passed” and a new day has come. I pray with all my heart that, in America at least, this would be true. That the Christian roots of that nation would have a chance to flourish once again. That all women will be respected, including those in the womb. That religious freedom will be restored, and that peace will fill her borders.

But without Jesus Christ and His Gospel as the source of the country’s liberty, it will be but a false peace and a false security.

As political pundits hash and rehash the American election, I pray that we will have the wisdom to perceive the bigger picture unfolding in our world. We have to step back, even beyond our own generation, to understand what is taking place at this time. A revolutionary spirit has been unleashed, and has been for some time. As Pope Leo XIII said, it is…

…the spirit of revolutionary change which has long been disturbing the nations of the world… there are not a few who are imbued with evil principles and eager for revolutionary change, whose main purpose is to stir up disorder and incite their fellows to acts of violence. —POPE LEO XIII, Encyclical Letter Rerum Novarum, n. 1, 38; vatican.va

That prophetic warning was followed by the Italian, Spanish, Communist, and Nazi revolutions. But while the wall fell in the Soviet Union, this revolutionary spirit has not. Rather, subtly, quietly, it has spread its errors throughout the world, namely, atheistic materialism driven by moral relativism.

This is to say that Britain’s “Brexit” vote to reject the EU, America’s recent election that repudiated the establishment, the rise of the far right in Europe… are not an indication that the nations are moving toward repentance, but nationalism and self-preservation. To overthrow governments, even corrupt governments, is not a bad thing, of course. But what fills the vacuum afterward?

The majority of countries in the West are rapidly moving away from moral absolutes with no sign of serious conversion in sight. What are people most worried about? It’s not the loss of faith in God, but according to polls, the “economy”, “peace” and “security”.  In fact, organized religion is being perceived more and more as part of the establishment that needs to be overthrown, particularly as sexual and financial scandals undermine the mainstream denominations, most especially, the Catholic Church.

This is all to say that the revolutionary spirit of our day has a name: the spirit of antichrist.

To deny that Jesus is the Messiah, the Savior, does not necessarily mean to intellectually reject His historical role. Rather, it is to reject what it implies: that I need Him to save me. The spirit of antichrist, therefore, places oneself at the center of the universe, rather than God. And from my place on the watchman’s wall, I do not see this spirit receding, even with America’s election results. Rather, within Christianity itself, there is a growing…

I am not saying this to be pessimistic. But the reality is that Catholicism in the West is in a free-fall, save for a remnant of souls clinging to the true faith. The reason is that this spirit of revolution has its teeth dug deeply into this wounded generation.

In the fight for the family, the very notion of being – of what being human really means – is being called into question… The question of the family … is the question of what it means to be a man, and what it is necessary to do to be true men… The profound falsehood of this theory [that sex is no longer an element of nature but a social role people choose for themselves] and of the anthropological revolution contained within it is obvious… —POPE BENEDICT XVI, December 21st, 2012

It means that man is losing the very essence of his nature: created “in the image of God.” As such, our reason for existence, the meaning and value of suffering, and the goal of life… is reduced to mere fleeting pleasure and gain. This is why, in this present global revolution, we are seeing a mass turning away from the faith—putting trust, rather, in our own resources.

Progress and science have given us the power to dominate the forces of nature, to manipulate the elements, to reproduce living things, almost to the point of manufacturing humans themselves. In this situation, praying to God appears outmoded, pointless, because we can build and create whatever we want. We don’t realise we are reliving the same experience as Babel. —POPE BENEDICT XVI, Pentecost Homily, May 27th, 2102

Is this just another way of saying what is taught in the Catechism?

The supreme religious deception is that of the Antichrist, a pseudo-messianism by which man glorifies himself in the place of God and his Messiah who has come in the flesh. —Catechism of the Catholic Church, n. 675

As the election results turned in Donald Trumps favor, the words of St. Paul flashed through my mind:

When people are saying, “Peace and security,” then sudden disaster comes upon them, like labor pains upon a pregnant woman, and they will not escape. (1 Thessalonians 5:3)

The Paris Climate Agreement was more than a treaty on climate change; it was a step toward the re-ordering of nations’ sovereignty and global governance. With America’s economy on life support, the future of that country may already lie far beyond the hands of Donald Trump.

We think of the great powers of the present day, of the anonymous financial interests which turn men into slaves, which are no longer human things, but are an anonymous power which men serve, by which men are tormented and even slaughtered. They are a destructive power, a power that menaces the world. —POPE BENEDICT XVI, Reflection after the reading of the office for the Third Hour this morning in the Synod Aula, Vatican City, October 11, 2010

[the] New Age shares with a number of internationally influential groups, the goal of superseding or transcending particular religions in order to create space for a universal religion which could unite humanity. Closely related to this is a very concerted effort on the part of many institutions to invent a Global Ethic. —Jesus Christ, The Bearer of the Water of Life, n. 2.5 , Pontifical Councils for Culture and Inter-religious Dialogue

Has Trump’s election quashed their well-known goals to reduce the population of the world in favor of a more “perfect” race? [6]cf. The Great Culling If anything, it has likely reinforced their diabolical mission to reduce what Clinton referred to as a “basket of deplorables.” In his essay on globalization, author Michael D. O’Brien writes:

The New Age which is dawning will be peopled by perfect, androgynous beings who are totally in command of the cosmic laws of nature. In this scenario, Christianity has to be eliminated and give way to a global religion and a new world order.  —‚Jesus Christ, The Bearer of the Water of Life, n. 4, Pontifical Councils for Culture and Inter-religious Dialogue

What is clear from the U.S. election is that the battle between light and darkness is on full display. Given the riots and protests, it is equally clear that the confrontation is far from over.

We are now facing the final confrontation between the Church and the anti-Church, of the Gospel and the anti-Gospel, between Christ and the Antichrist. —Cardinal Karol Wojtyla (JOHN PAUL II ), at the Eucharistic Congress, Philadelphia, PA; August 13, 1976; Deacon Keith Fournier, an attendee at the Congress, reported the words as above; cf. Catholic Online

I submit that this is the reason Our Lady continues to appear, continues to beckon humanity to return to her Son, continues to weep in her images and statues throughout the world. Her Immaculate Heart will triumph… but before what cost?

That can be decided, in part, through our fasting, prayers, and conversion…

On the Eve of Revolution

Heart of the New Revolution

Thank you for your tithes and prayers—
both very much needed.