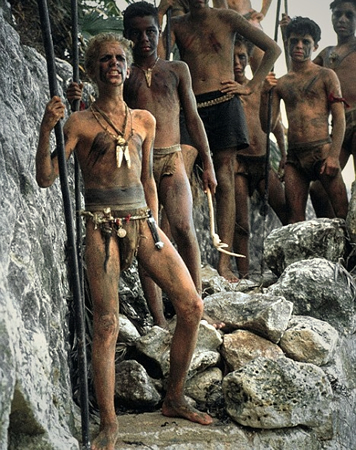 Scene from “Lord of the Flies”, Nelson Entertainment

IT is perhaps one of the most augury and revealing movies in recent times. The Lord of the Flies (1989) is the story of a group of boys who are the survivors of a shipwreck. As they settle in to their island surroundings, power struggles ensue until the boys devolve into essentially a totalitarian state where the powerful control the weak—and eliminate the elements that don’t “fit in.” It is, in fact, a parable of what has happened over and over again in the history of mankind, and is repeating itself again today before our very eyes as the nations reject the vision of the Gospel put forth by the Church.

Societies not recognizing this vision or rejecting it in the name of their independence from God are brought to seek their criteria and goal in themselves or to borrow them from some ideology. Since they do not admit that one can defend an objective criterion of good and evil, they arrogate to themselves an explicit or implicit totalitarian power over man and his destiny, as history shows. —POPE JOHN PAUL II, Centesimus annus, n. 45, 46

In the final scenes, the island descends into chaos and fear as the dissidents are hunted. The boys run out onto the beach… and all of a sudden find themselves at the feet of Marines who had just landed by boat. One soldier stares down in disbelief at the savage kids and asks, “What are you doing?” It was a moment of illumination. Suddenly, these barbarous tyrants became little boys again who began to weep as they remembered who they truly were.

It is the same kind of moment experienced by Job as the Lord put his “wisdom” in place:

The Lord addressed Job out of the storm… Have you ever in your lifetime commanded the morning and shown the dawn its place… Have you entered into the sources of the sea… Have the gates of death been shown to you… Have you comprehended the breadth of the earth? (First reading)

Humbled, Job responds, “What can I answer you? I put my hand over my mouth.”

O LORD, you have probed me and you know me; you know when I sit and when I stand; you understand my thoughts from afar. (Today’s P salm)

Such a moment is coming for the world before it is going to be purified. [1]see The Eye of the Storm and Revelation Illumination The Book of Revelation speaks of “seals” being broken that plunge the entire world into war, plagues, famine, economic distress, and persecution. [2]cf. Rev 6:3-11; cf. The Seven Seals of Revolution And then will come a moment of illumination in which “The kings of the earth, the nobles, the military officers, the rich, the powerful, and every slave and free person.” [3]cf. Rev 6:12-17 will be asked the question:

The Lord’s question: “What have you done?”, which Cain cannot escape, is addressed also to the people of today, to make them realize the extent and gravity of the attacks against life which continue to mark human history… —POPE JOHN PAUL II, Evangelium Vitae; n. 10

This question will come as a light that will expose to every person their sins, even the smallest. [4]“Suddenly I saw the complete condition of my soul as God sees it. I could clearly see all that is displeasing to God. I did not know that even the smallest transgressions will have to be accounted for. What a moment! Who can describe it? To stand before the Thrice-Holy-God!”—St. Faustina; Divine Mercy in My Soul, Diary, n. 36 Like the Psalmist today, we may cry out, “Where can I go from your spirit? From your presence where can I flee?”

They cried out to the mountains and the rocks, “Fall on us and hide us from the face of the one who sits on the throne and from the wrath of the Lamb, because the great day of their wrath has come and who can withstand it.” (Rev 6:16-17)

It will be a warning. It will be a gift, actually. Because the Lord desires that no one be lost. But He also tells us that those who refuse to humble themselves as Job did will find themselves standing in the just path of the “wrath of the Lamb” as the Day of the Lord dawns.

Woe to you, Chorazin! Woe to you, Bethsaida! For if the mighty deeds done in your midst had been done in Tyre and Sidon, they would long ago have repented, sitting in sackcloth and ashes. (Today’s Gospel)

The Tree is an exceptionally promising work of fiction from a young, gifted writer, filled with Christian imagination focusing on the struggle between light and darkness.
—Bishop Don Bolen, Diocese of Saskatoon, Saskatchewan

For a limited time, we have capped shipping to only $7 per book.
NOTE: Free shipping on all orders over $75. Buy 2, get 1 Free!