THE NOW WORD ON MASS READINGS
for April 2nd, 2014
Wednesday of the Fourth Week of Lent 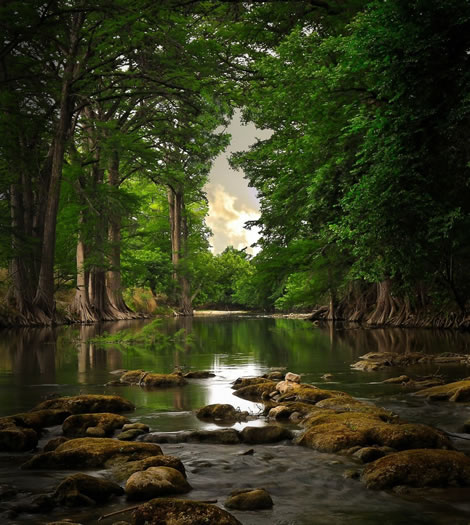 IN yesterday’s first reading, when an angel took Ezekiel to the trickle of water that was flowing to the east, he measured four distances from the temple from where the small river began. With each measurement, the water became deeper and deeper until it could not be crossed. This is symbolic, one could say, of the “four ages of grace”… and we are on the threshold of the third.

In the very beginning, a river flowed from the Garden of Eden, and then branched off into four rivers—symbolically surrounding all of mankind with the grace and love of the Holy Trinity. [1]cf. Gen 2:10 But original sin dammed the River of Life, choking off grace, and forcing Adam and Eve from paradise.

Sin had entered the world. But God had a plan… and the river of grace began to run again, cleansing the face of the earth of all wickedness in Noah’s time. This began the Age of the Father when He would begin to enter into covenants with His people.

The trickle of this living water would carry the chosen people forward from one covenant to the next as the river of grace became deeper and deeper until it burst through the very heart of the Son of God in a new and everlasting covenant (indeed, it always flowed from His heart). This began the Age of the Son.

In a time of favor I answer you, on the day of salvation I help you; and I have kept you and given you as a covenant to the people… (First reading)

Jesus came to continue the work of the Father:

My Father is at work until now, so I am at work. (Today’s Gospel)

In this present age, the River of Life has flowed through the Church, teaching, expanding, and equipping her to bring the Good News of salvation to the ends of the earth. She has learned the profound message in Isaiah’s prophecy that we are not orphaned or forgotten, but through Christ, we are adopted sons and daughters of the Father.

And now, the River of Life is carrying the Church into the third age, the Age of the Holy Spirit when all the nations will be “baptized in the Spirit,” for Jesus said “this gospel will be preached throughout the world as a witness to all nations, and then the end will come.” [2]cf. Matt 24:14 The Son continues the work of the Father, the Spirit continues the work of the Son.

The time has come to exalt the Holy Spirit in the world… I desire that this last epoch be consecrated in a very special way to this Holy Spirit…It is his turn, it is his epoch, it is the triumph of love in My Church, in the whole universe.—Jesus to Venerable María Concepción Cabrera de Armida; Fr. Marie-Michel Philipon, Conchita: A Mother’s Spiritual Diary, p. 195-196

Afterward, will come the fourth and eternal age in which “all who are in the tombs will hear his voice and will come out, those who have done good deeds to the resurrection of life, but those who have done wicked deeds to the resurrection of condemnation.” That is, the River of Life will be too deep to cross without one having received the gift of salvation that comes by faith, expressed in good works.

And those who do cross will, as in the days of the Garden of Eden, drink forever from “the river of life-giving water, sparkling like crystal, flowing from the throne of God and of the Lamb”… [3]cf. Rev 22:1

…in that fourth, and Eternal Age of the Holy Trinity.