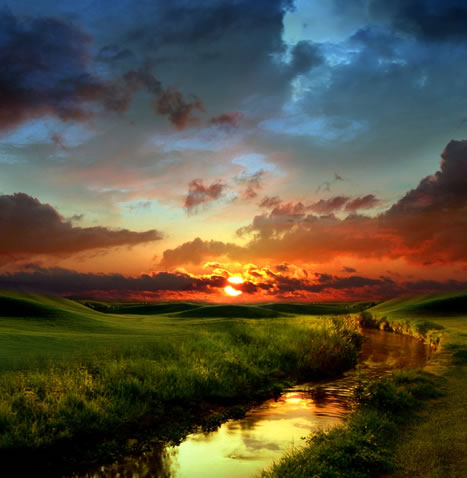 ISAIAH gives such a consoling vision of the future that one could be forgiven for suggesting it is a mere “pipe dream.” After the purification of the earth by “the rod of [the Lord’s] mouth, and the breath of his lips,” Isaiah writes:

Then the wolf shall be a guest of the lamb, and the leopard shall down with the kid… There shall be no more harm or ruin on all my holy mountain; for the earth shall be filled with the knowledge of the Lord, as water covers the sea. (Isaiah 11)

This is symbolic language to describe his vision, whereby the Lord establishes a reign of peace on earth, such that men literally throw down their arms and creation enters into a renewed harmony. Not only the early Church Fathers, but the modern popes have all stood by Isaiah’s vision with “unshakeable faith” (see Related Reading below). And what of Pope Francis?Yes, he too, in communion with his predecessors, is pointing us to a “horizon of hope” precisely because it is “the Lord himself who guides our journey” and…

…[the] pilgrimage of all of the People of God; and by its light even the other peoples can walk towards the Kingdom of justice, towards the Kingdom of peace. What a great day it will be, when the weapons will be dismantled in order to be transformed into instruments of work! And this is possible! We bet on hope, on the hope of peace, and it will be possible. —POPE FRANCIS, Sunday Angelus, December 1st, 2013; Catholic News Agency, Dec. 2nd, 2013

It is possible because the One who comes riding on a white horse to purify the earth is described by St. John as “Faithful and True.” [1]Rev 19:11 Jesus is the faithful one. He is the one guiding human history. He has not forgotten us! He has not forgotten you… even though you may feel as John Paul II did when he lamented in 2003:

The difficulties on the world horizon, present at the start of this new millennium, lead us to believe only an act from on high can make us hope in a future that is less bleak. —Reuters News Agency, February 2003

And how would this “act from on high” be made possible to bring about a brighter future?

The grave challenges confronting the world at the start of the new Millennium lead us to think that only an intervention from on high, capable of guiding the hearts of those living in situations of conflict and those governing the destinies of nations, can give reason to hope for a brighter future. The Rosary by its nature is a prayer for peace.—BLESSED JOHN PAUL II, Rosarium Virginis Mariae, n. 40

And why are we surprised that the Holy Father would turn to Our Blessed Mother in these days of tribulation, when the very Word of God testifies that the woman shall crush the serpent with her heel? [2]cf. Gen 3:15 And how will she do this? By raising an army who are so in love with Jesus, so loyal to Him, so ready to love their neighbour, that the power of His light and love shining through them will scatter the kingdom of darkness by their witness and word.

The armies of heaven followed him, mounted on white horses and wearing clean white linen… They conquered [the dragon] by the blood of the Lamb and by the word of their testimony; love for life did not deter them from death. (Rev 12:11)

And now, brothers and sisters, I pray you understand better what this new Pope is about, what task he has been given in our times. His new Apostolic Exhortation, Evangelii Gaudium, is essentially a blueprint for battle to prepare the Church to enter into the world with renewed simplicity and authenticity:

—A renewed simplicity by returning again to the very essence of the Gospel, which is the love and mercy of Jesus;

—a renewed authenticity whereby we bring others, especially the poor, to a true encounter with Jesus by letting them encounter Him in us.

This can only happen if we ourselves have encountered Jesus, and in turn, says the Holy Father, let Jesus encounter us.

Letting ourselves be encountered by God means just this: to let ourselves be loved by the Lord! —POPE FRANCIS, Homily, Monday, December 2nd, 2013; Catholic News Agency

This is why I recently wrote Give Me Hope! because it is precisely when I fall in love with Jesus, I mean, really fall in love with Him and let Him love me—that “perfect love drives out all fear.” To the one who looks upon the world and our times with the eyes of fear, the eyes of the flesh… the future does indeed look bleak. Yes, we need to look at the signs of the times, but in the right way!

It is the Holy Spirit, the Pope said, who “gives us this present, a gift: the intelligence to understand.” But this wisdom is not of this world. As Jesus says in the Gospel today:

…for although you have hidden these things from the wise and the learned you have revealed them to the childlike. (Luke 10)

Brother and sisters, we are approaching what early Church Father St. Irenaeus of Lyons called, “the time of His Kingdom” when, as the Psalm says today, “Justice shall flower in his days and profound peace…” But Jesus said that, unless we become like a little child, we cannot enter the Kingdom. Many of you are frustrated; you are afraid as you see the world closing in on you, your security evaporating, and prophecies remaining unfulfilled. You are tempted to fall asleep. The antitdote to this despair is the faith of a child that abandons oneself to God’s will like Jesus did on the Cross.

Let us once again fix our eyes upon the horizon of hope, and get ready. For Jesus—and Mary—have a mission for you.