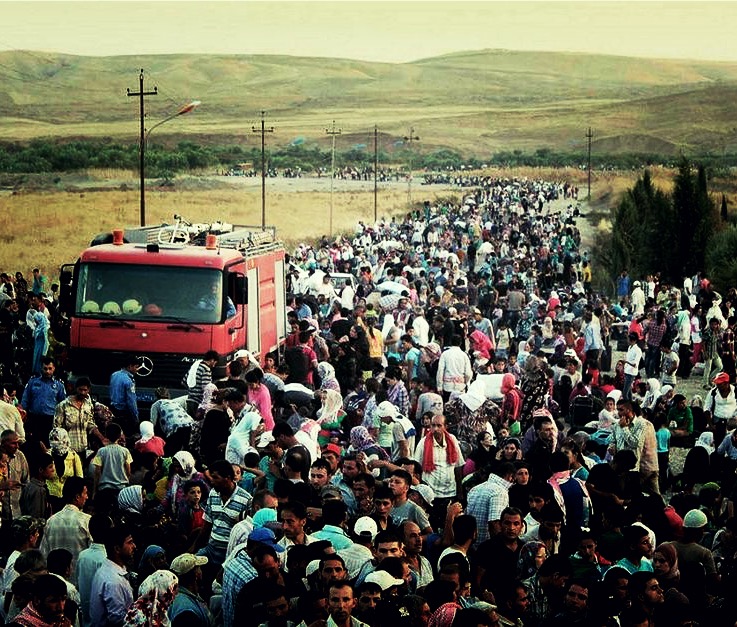 “A MORAL tsunami has swept through the world,” I said ten years ago to the parishioners of Our Lady of Lourdes parish in Violet, Louisiana. “But there is another wave coming—a spiritual tsunami, which will sweep many people out of these pews.” Two weeks later, a 35 foot wall of water swept through that church as Hurricane Katrina roared ashore.

As I continue my speaking tour in Louisiana this week, I continue to meet souls who never forgot that message; men and women who were literally exiled from their homes and whom have never returned. One of them is Fr. Kyle Dave, the priest who invited me then to Violet. In fact, it was exactly ten years ago today that Fr. Kyle fled to Canada to remain in exile with me, as he had lost everything in the storm. What we didn’t expect, however, was a visitation from the Lord…

I took Fr. Kyle to several Canadian parishes, who raised funds to send back with Fr. to help repair their church and community. During that time, our hearts were stirring; we felt the Lord calling us to the mountains for a retreat.

It was there, at the base of the Rockies, that the Mass Readings, Liturgy of the Hours, and our devotional reading converged in what can only be described as a supernatural encounter with the Word of God. We were literally exhausted each night as the Lord gave what seemed to be unmistakable and powerful prophetic words concerning our times, and the times to come.

As the years have gone by, we have both watched as these words have quickly come to pass, while others remain to be fulfilled. As I spoke in F 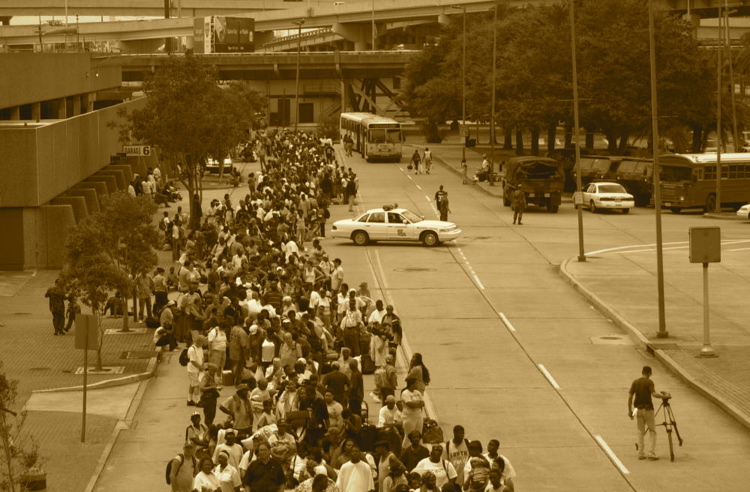 r. Kyle’s parish last night on my speaking tour here in Louisiana, words that I felt compelled to share with my readers in 2006 from our retreat, were in the back of my mind:

“New Orleans was a microcosm of what is to come… you are now in the calm before the Storm.” When Hurricane Katrina struck, many residents found themselves in exile. It did not matter if you were rich or poor, white or black, clergy or layman —if you were in its path, you had to move now. There is a global “shake up” coming, and it will produce in certain regions exiles. (see The Coming Refuges and Solitudes)

See! The Lord is about to empty the earth and lay it waste; he will twist its surface,and scatter its inhabitants: People and priest shall fare alike: servant and master, Maid and mistress, buyer and seller, Lender and borrower, creditor and debtor. (Isaiah 24:1-2)

As I write these words, millions of Syrians and other middle eastern peoples are fleeing their countries as Islamic extremists continue their demonic campaigns of terror. Suddenly, the entire world is faced with massive population shifts and all the problems this poses. But, dear brothers and sisters, this is only the beginning. T 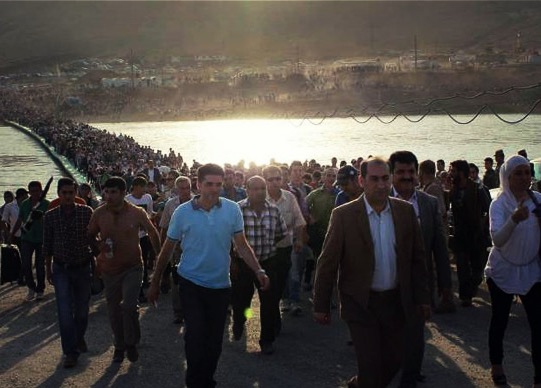 he Great Storm has hardly begun.

My purpose today is not to enter the political debate on how we should handle this situation. For I think the time is coming when no one will have an answer—except God. Yes, I think that is the whole point of this mostly man-made Storm that has come upon the world like a hurricane: to bring humanity to its knees; to make us realize, once again that God exists, and that we cannot exist without Him.

I am thinking again of those prophetic words spoken in Rome in the presence of Pope Paul VI in St. Peter’s Square (which I examined in a video series to show how it follows the teachings of the Church Fathers; see links below):

Because I love you, I want to show you what I am doing in the world today. I want to prepare you for what is to come. Days of darkness are coming on the world, days of tribulation… Buildings that are now standing will not be standing. Supports that are there for My people now will not be there. I want you to be prepared, My people, to know only Me and to cleave to Me and to have Me in a way deeper than ever before. I will lead you into the desert… I will strip you of everything that you are depending on now, so you depend just on Me. A time of darkness is coming on the world, but a time of glory is coming for My Church, a time of glory is coming for My people. I will pour out on you all the gifts of My Spirit. I will prepare you for spiritual combat; I will prepare you for a time of evangelism that the world has never seen…. And when you have nothing but Me, you will have everything: land, fields, homes, and brothers and sisters and love and joy and peace more than ever before. Be ready, My people, I want to prepare you… —Pentecost Monday, May, 1975; given by Dr. Ralph Martin

The stripping that is here and coming, that many of us are already experiencing interiorly, is not a passive process. That is, we are being called by the New Gideon to join God’s army to bring souls back to Him. When the Eye of the Storm finally lands after tremendous labor pains, of which exiles are one of them—there will be a lot of work to do. The Exorcism of the Dragon, as I wrote in The Triumphs in Scripture, is going to be a process: one of praying with, accompanying, teaching, and facilitating healing in broken, confused, and stunned souls. The Eye of the Storm is a both a warning and a reprieve, a time of decision for humanity. As Servant of God Maria Esperanza prophesied:

A great moment is approaching, a great day of light… it is the hour of decision for mankind. —Servant of God, Maria Esperanza (1928-2004), The Antichrist and the End Times, Rev. Joseph Iannuzzi, P. 37

In a word, we are called to become an Army of Love. And that means to love all our neighbours, including those exiles who are suddenly upon our doorsteps. For we too may become those exiles tomorrow.

We must resolve now to live as nobly and as justly as possible, as we educate new generations not to turn their back on our “neighbors” and everything around us… Our wor 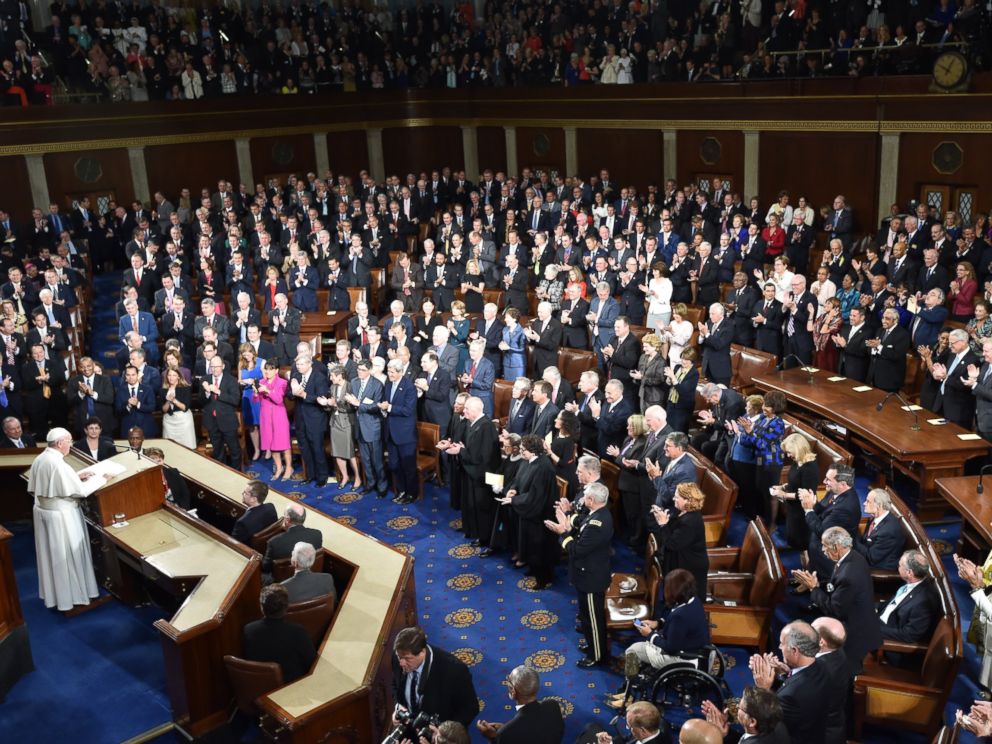 ld is facing a refugee crisis of a magnitude not seen since the Second World War… We must not be taken aback by their numbers, but rather view them as persons, seeing their faces and listening to their stories, trying to respond as best we can to their situation. To respond in a way which is always humane, just and fraternal. We need to avoid a common temptation nowadays: to discard whatever proves troublesome. Let us remember the Golden Rule: “Do unto others as you would have them do unto you” (Mt 7:12). —POPE FRANCIS, Address to U.S. Congress, September 24th, 2015 (italics my emphasis); Zenit.org

I am reminded of St. John Paul II’s cry during his pontificate:

Do not be afraid! Open, open all doors to Christ. Open borders of countries, economic and political systems… —ST. JOHN PAUL II: A Life in Pictures, TIME, p. 172

While some have wrongly interpreted this statement and those of Benedict XVI and Francis to imply a complicity of the pontificate with an evil New World Order, [1]cf. Benedict, and the New World Order it really is a Gospel call to an authentic unity of peoples that Christ Himself prayed for:

This is why I have urged you frequently, dear friends, to pray for wisdom—wisdom to differentiate between what is the move of the Spirit toward a true era of peace and justice, and what is The Parallel Deception of Satan to implement what Pope Francis called today, “new global forms of slavery.” [2]POPE FRANCIS, Address to U.S. Congress, September 24th, 2015; Zenit.org This battle between two kingdoms is the apex of the final confrontation between the Woman clothed with the Sun and the Dragon.

At the dawn of the new Millennium, we wish to propose once more the message of hope which comes from the stable of Bethlehem: God loves all men and women on earth and gives them the hope of a new era, an era of peace. His love, fully revealed in the Incarnate Son, is the foundation of universal peace. When welcomed in the depths of the human heart, this love reconciles people with God and with themselves, renews human 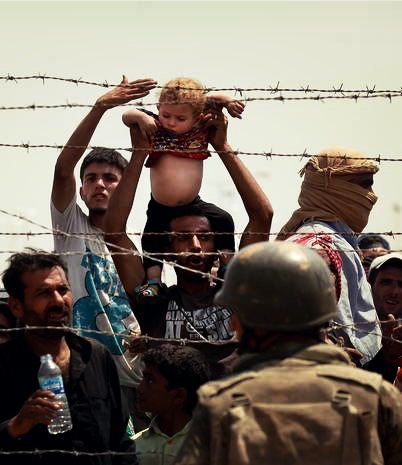 relationships and stirs that desire for brotherhood capable of banishing the temptation of violence and war. The Great Jubilee is inseparably linked to this message of love and reconciliation, a message which gives voice to the truest aspirations of humanity today. —POPE JOHN PAUL II, Message of Pope John Paul II for the Celebration of the World Day of Peace, January 1, 2000

It is the work of Our Blessed Mother in these times, to help us to become copies of herself—docile, obedient, and humble—so that the life of Jesus may be reproduced in us once again. That is, so the Morning Star may rise in us to become the heralds and beginning, the dawning of this new era.

I said the “triumph” will draw closer [by 2017]. This is equivalent in meaning to our praying for the coming of God’s Kingdom… the power of evil is restrained again and again, that again and again the power of God himself is shown in the Mother’s power and keeps it alive. The Church is always called upon to do what God asked of Abraham, which is to see to it that there are enough righteous men to repress evil and destruction. I understood my words as a prayer that the energies of the good might regain their vigor. So you could say the triumph of God, the triumph of Mary, are quiet, they are real nonetheless. —POPE BENEDICT, XVI, Light of the World, p. 166, A Conversation With Peter Seewald

The Prophecy at Rome — Video Series 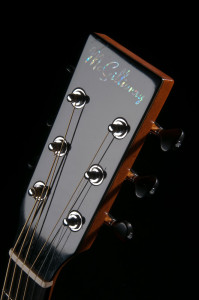