THE NOW WORD ON MASS READINGS
for September 15th, 2014
Memorial of Our Lady of Sorrows 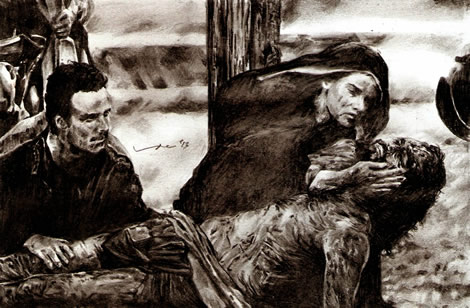 I stood and watched as tears welled in her eyes. They ran down her cheek and formed drops on her chin. She looked as though her heart could break. Only a day before, she had appeared peaceful, even joyful… but now her face seemed to betray the deep sorrow in her heart. I could only ask “Why…?”, but there was no answer in the rose-scented air, since the Woman I was looking at was a statue of Our Lady of Fatima.

The statue remains in the home of a Californian couple whom I have come to know and love over the years (I mentioned the husband in my recent reflection, Fatima, and the Great Shaking.) She wrote me this morning to say that today, on this memorial of Our Lady of Sorrows, her face is once again “covered in tears.” The tears are in fact a fragrant oil that inexplicably flows from her eyes—like so many other icons and statues throughout the world that have been investigated and found to be miraculous. Because statues normally don’t cry.

My dear friend Michael D. O’Brien wrote a moving meditation on Our Lady’s sorrow beneath the foot of the Cross:

When they take the lacerated body down and put its stiff, distorted limbs into her lap she sees the baby she once held in her arms. [His humanity] had been created for love and now he lies here again, covered with the filth of the world, battered by its malice, torn into pieces by its diseased soul. Then, through the gash in her heart, all the anguish of mothers pours out and the night is filled with cries… they are cries like no other in the history of mankind, before or to come. The angel had rescued her and Joseph and the child from the slaughter of the innocents. Now, at last, she too is called to weep the unbearable tears of Rachel weeping for her children, because they are no more. —Waiting: Stories for Advent, wordincarnate.wordpress.com

The reason that Our Lady is weeping today is that, once again, the body of her Son—His mystical body, the Church—is ‘covered with the filth of the world, battered by malice, torn into pieces by its diseased soul.’

…you yourself [Mary] a sword will pierce so that the thoughts of many hearts may be revealed. (Today’s Gospel)

Growing up, I remember a time when my brother and I were fighting in the basement. We didn’t realize that our mom upstairs could hear. Suddenly, we heard her voice crying out, “Stop it! Stop it!” We froze in the face of her tears, the heart of a mother torn by the anger tearing us apart. Her sorrow was like a light that pierced the “divisions among” [1]cf. first reading us, revealing our hearts in a split second.

There is a moment coming to our world, so torn apart by divisions, when “many hearts may be revealed”—an “illumination of conscience.” [2]cf. The Eye of the Storm We will see the Cross of Christ in the sky, say some of the mystics and saints. [3]cf. Revelation Illumination And if we do, I do not doubt that we will also see a Mother standing beneath it again, weeping not only for a wounded Son, but for a humanity so ambivalent to such a love as His… a Mother and Son’s tears co-mingling to form a single drop of light falling to the earth to reveal the hearts of many.

Yet, there is one way for us to assuage her bitter tears today. As it says in the Psalm today:

Sacrifice or oblation you wished not, but ears open to obedience you gave me.

By our obedience to her Son in even the smallest things, which Our Lord Himself said is proof of our love, [4]cf. John 14:15 we begin to wipe away the tears of Our Mother… and those too of a Son.