THE NOW WORD ON MASS READINGS
for Monday of the Ninth Week of Ordinary Time, June 1st, 2015
Memorial of St. Justin 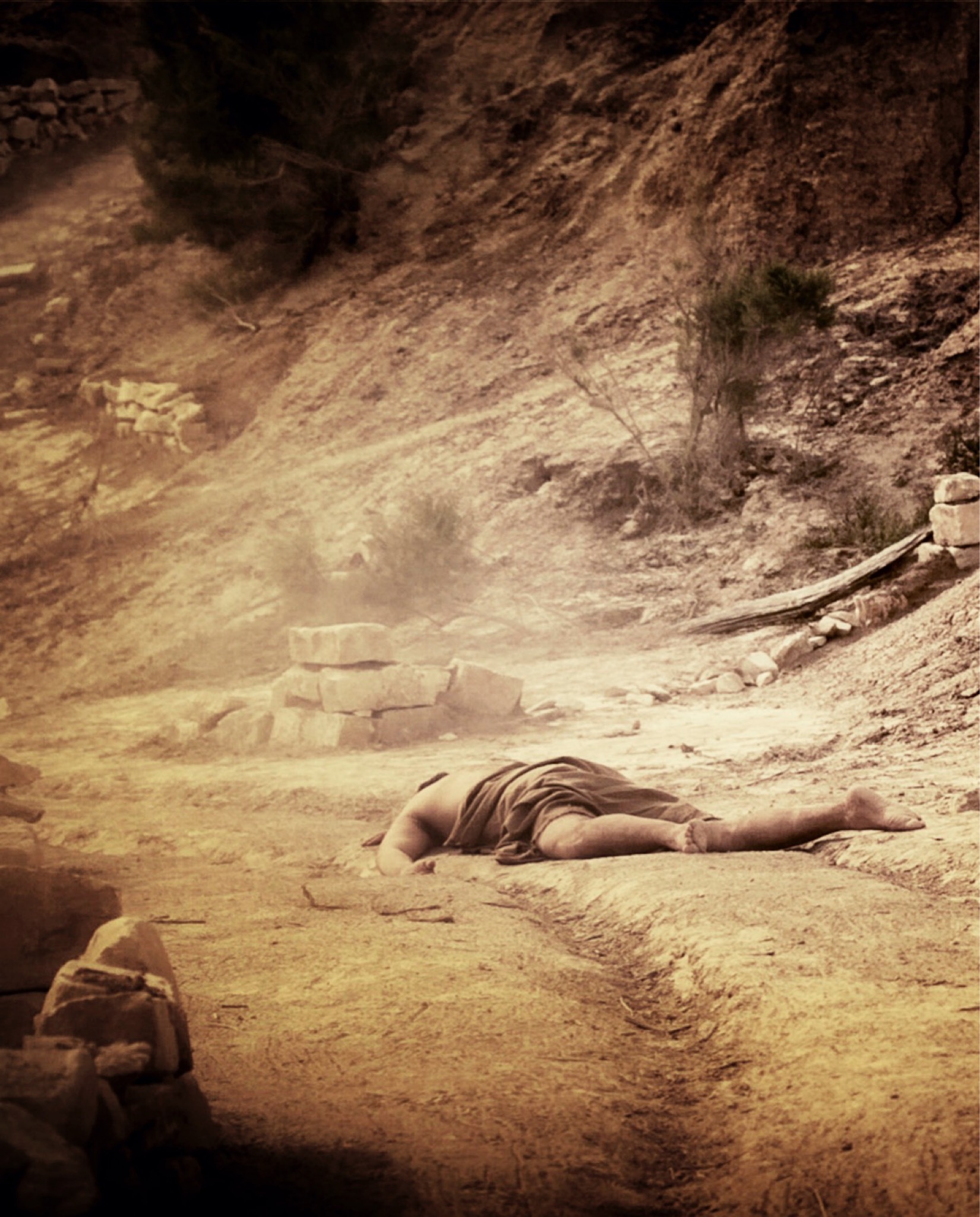 FEAR, brothers and sisters, is silencing the Church in many places and thus imprisoning truth. The cost of our trepidation can be counted in souls: men and women left to suffer and die in their sin. Do we even think in this way anymore, think of the spiritual health of one another? No, in many parishes we do not because we are more concerned with the status quo than quoting the state of our souls.

In today’s first reading, Tobit prepares to celebrate the festival of Pentecost with a feast. He says,

…a fine dinner was prepared for me… the table was set for me.

But Tobit was aware that the blessings he received were meant to be shared. And so he asks his son Tobiah to “go out and try to find a poor man” to share his meal.

As Catholics, we have been given a veritable feast of truth, entrusted with the fullness of Revelation, the “whole” truth, so to speak, on matters of faith and morals. But it is not a feast for just “me.”

How could the idea have developed that Jesus’s message is narrowly individualistic and aimed only at each person singly? How did we arrive at this interpretation of the “salvation of the soul” as a flight from responsibility for the whole, and how did we come to conceive the Christian project as a selfish search for salvation which rejects the idea of serving others? —POPE BENEDICT XVI, Spe Salvi (Saved In Hope), n. 16

Tobit asks his son to bring “a sincere worshiper of God” to share his meal. That is, our mission as a Church is not to force the truth upon those who don’t want it, to wield the Word of God like a bludgeon. But through our timidity, even those who are open to truth today are being deprived and starved of that “food.” They are being deprived because we are afraid to be rejected and persecuted, and thus we seal our lips. “A person in fear,” says Pope Francis,

…does nothing, doesn’t know what to do: is fearful, frightened, focused on herself so that something harmful or bad won’t happen to her… fear leads to selfish egocentrism and it paralyzes us. —POPE FRANCIS, Morning Meditation, L’Osservatore Romano, Weekly ed. in English, n. 21, 22 May 2015

Tobit was not afraid to open his heart to the poor. But his son Tobiah returns and says,

Father, one of our people has been murdered! His body lies in the market place where he was just strangled!

Without hesitation, Tobit sprang to his feet, carried the dead man from the street, and put him in one of his own rooms in order to bury him the next morning. He then ate his meal “in sorrow.” But you see, Tobit did not do this without cost. For his neighbours mocked him saying,

He is still not afraid! Once before he was hunted down for execution because of this very thing; yet now that he has scarcely escaped, here he is again burying the dead!

All around us are the spiritually poor and “dead” today, particularly the casualties of sexual immorality. The constant promotion of alternative forms of marriage, lust, sexual abberations, graphic sex education, pornography and the like are “killing” the soul of man, most alarmingly the youth. And yet, fear, political correctness, and the desire to be approved are neutering and silencing the Body of Christ. Homilies often placate our egos, stop short of calling us to repent, and avoid the “hot button” issues that would stir controversy if not persecution. Bishops issue sweeping and elegant statements from behind their gates that are mostly ignored by the media and rarely 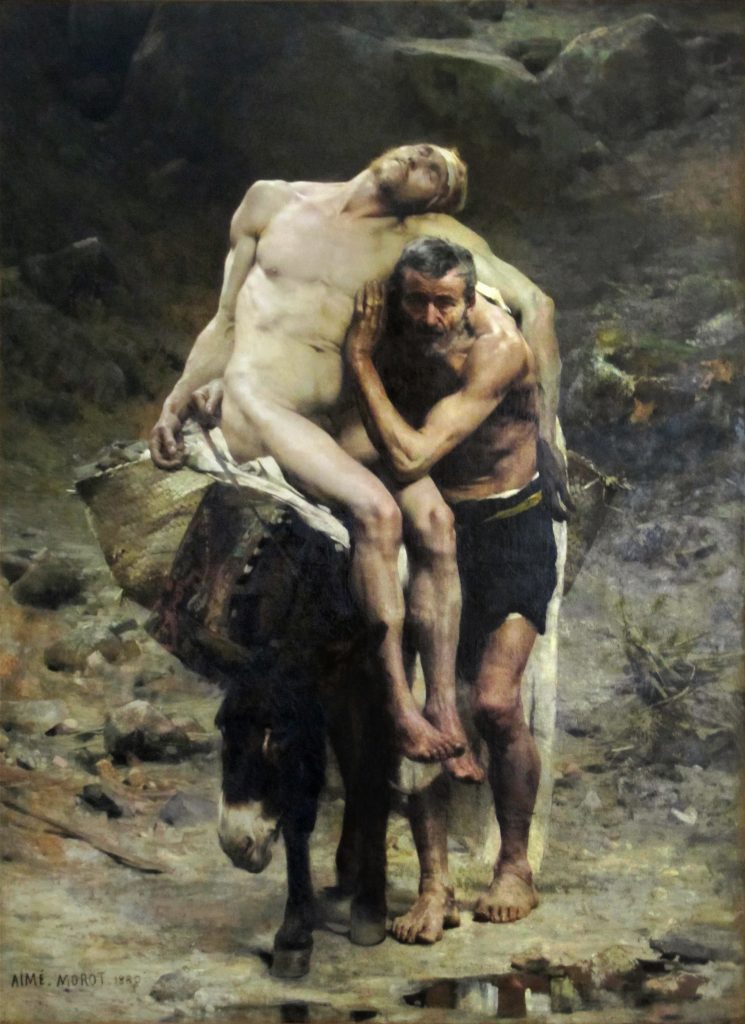 read by the laity. And laymen close their mouths in the workplace, schools, and marketplace in order to “keep the peace.”

My God, are we not like the priest and Levite in the parable of the Good Samaritan, walking once again on the “opposite-side” of the road in order to avoid personally confronting, dressing, and healing the wounds of our dying brothers and sisters? We have forgotten what it means to “weep with those who weep.” [1]cf. Rom 12:15 Like Tobit, are we weeping over the brokenness of this generation? And if so, are we weeping because the world has become “so bad” or weeping out of compassion for others who are in bondage? The words of St. Paul come rushing to mind:

I tell you, brothers, the time is running out. From now on, let those having wives act as not having them, those weeping as not weeping, those rejoicing as not rejoicing, those buying as not owning, those using the world as not using it fully. For the world in its present form is passing away. (1 Cor 7:29-31)

Yes, time is running out on this generation—nearly every authentic prophet in the world is blowing this trumpet (for those with ears to hear). Pope Benedict called the Church to awaken to the evil that surrounds us:

It’s our very sleepiness to the presence of God that renders us insensitive to evil: we don’t hear God because we don’t want to be disturbed, and so we remain indifferent to evil.”…such a disposition leads to “a certain callousness of the soul towards the power of evil… the disciples’ sleepiness is not a problem of that one moment, rather of the whole of history, ‘the sleepiness’ is ours, of those of us who do not want to see the full force of evil and do not want to enter into his Passion.” —POPE BENEDICT XVI, Catholic News Agency, Vatican City, Apr 20, 2011, General Audience

Thus, more than truth, the world needs truth in love. That is, like Tobit, bruised and hurting souls are waiting for us to welcome them into a “room” of our heart where we can bring them to life. Only when souls know they are loved by us are they really open to receive the medicine of truth we offer.

Have we forgotten that the truth sets us free? Today, more and more Catholics are buying the lie that tolerance, rather, is the path to peace. And hence, our generation has come to tolerate, with the exception of a few brave souls, nearly every abberation that humankind can possibly conceive. “Who am I to judge?”, we say—twisting the meaning of Pope Francis’s trendy statement. And so we keep the peace, but a false peace, because if the truth sets us f
ree, then falsehood enslaves. False peace is a seed of destruction that sooner or later will rob our souls, families, towns, and nations of authentic peace if we let it sprout, grow, and take root among us “because the one who sows for his flesh will reap corruption from the flesh” [2]cf. Gal 6:8.

Christian, you and I are called to courage, not comfort. I sense the Lord weeping today, asking us:

Are you going to leave my brothers and sisters for dead?

Or like Tobit, will we run to them with the Gospel of Life—despite the mockery and persecution we risk bringing upon ourselves?

In light of today’s readings, I want to begin a bold series of writings this week On Human Sexuality and Freedom in order to speak light into the utter darkness that has invaded, in our times, this most precious gift of our sexuality. It is in hopes that someone, somewhere, will find the spiritual food they need in order to begin healing the wounds of their hearts.

I prefer a Church which is bruised, hurting and dirty because it has been out on the streets, rather than a Church which is unhealthy from being confined and from clinging to its own security… If something should rightly disturb us and trouble our consciences, it is the fact that so many of our brothers and sisters are living without the strength, light and consolation born of friendship with Jesus Christ, without a community of faith to support them, without meaning and a goal in life. More than by fear of going astray, my hope is that we will be moved by the fear of remaining shut up within structures which give us a false sense of security, within rules which make us harsh judges, within habits which make us feel safe, while at our door people are starving and Jesus does not tire of saying to us: “Give them something to eat” (Mk 6:37). —POPE FRANCIS, Evangelii Gaudium, n. 49