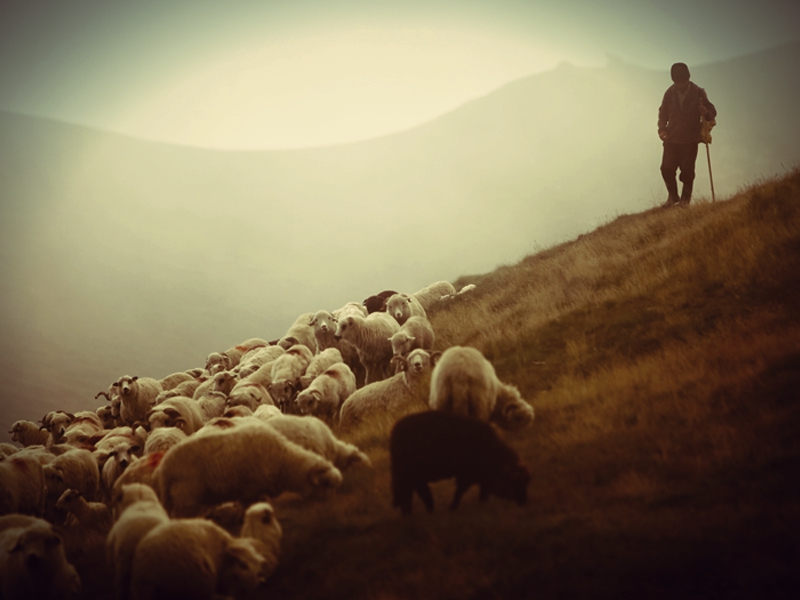 While writing about the Storm of Fear, Temptation, Division, and Confusion recently, the writing below was lingering in the back of my mind. In today’s Gospel, Jesus says to the Apostles, “Come away by yourselves to a deserted place and rest a while.” [1]Mark 6:31 There is so much happening, so fast in our world as we approach the Eye of the Storm, that we risk getting disoriented and “lost” if we don’t heed our Master’s words… and enter into the solitude of prayer where He can, as the Psalmist says, give “me repose beside restful waters”.

A couple of weeks before Easter, I began to hear a soft and irresistible word in my heart:

There is a gentle urgency to this invitation, as though “it is time” to enter a new place of intimacy with the Lord, if not something much more…

The “desert” is, biblically speaking, the place where God takes His people to speak to them, refine them, and prepare them for the next phase of their journey. Two examples that immediately come to mind are the Israelites forty year trek through the desert to the Promised Land, and then Jesus’ forty days of solitude that were a prelude to His public ministry.

For the Israelites, the desert was the place where God dealt with the people’s idols and flippant hearts; for Jesus, it was a further deepening of the union of His human will with the Divine. For us now, it is to be both. This invocation to the desert is a time when we must smash any remaining idols once and for all; it is the time of stripping our human will and taking on the Divine Will. As Jesus said in the desert:

One does not live by bread alone, but by every word that comes forth from the mouth of God. (Matt 4:4) 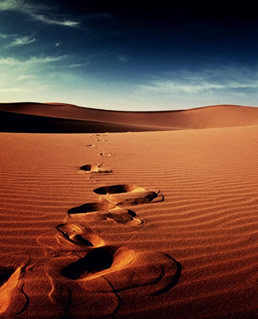 And so the Lord, seeing that we, His Bride, have bedecked ourselves with worldliness, wants to strip us of ungodly compromise and clothe us again in the simplicity and innocence that is already the beginning of an “era of peace”.

…she decked herself out with her rings and her jewelry, and went after her lovers—but me she forgot… Therefore, I will allure her now; I will lead her into the wilderness and speak persuasively to her. Then I will give her the vineyards she had, and the valley of Achor as a door of hope. (Hos 2:15-17)

The valley of Achor means “valley of trouble.” Yes, the Good Shepherd leads His people through the valley of the shadow of death in order to bring to death that which is not of Him. It is also the place where the sheep learn to hear His voice and learn absolute trust in the Good Shepherd. And for this reason, the enemy of our souls is coming at the Bride of Christ with a torrent of temptation in order to dissuade and discourage her, to keep her from the desert. Because there, the dragon knows she will be safe…

…the woman was given the two wings of the great eagle, so that she could fly to her place in the desert, where, far from the serpent, she was taken care of for a year, two years, and a half. (Rev 12:14)

THE BATTLE BEFORE THE DESERT

Before the Israelites entered the desert, they faced a moment of great despair: Pharoah’s armies pursued them such that they were now backed against the Red Sea with nowhere to go. Many despaired… just as many of you may feel tempted to despair today. But now is the hour of faith. Can you hear Jesus calling you?

And you might say, “Yes Lord, but I am attacked from every side. I see nothing but an army of temptations to my back, and nowhere to go in front of me. Where are you Lord? Why have you abandoned me?” How this is expressed will vary between readers. For some of you, it will be health problems, others financial, others relational, and yet others a struggle with addiction, etc. But the response is to be the same for all of us, summarized in five words:

Jesus, I trust in You.

It is essentially the direction Moses gave the people as they cried out in despair:

Do not fear! Stand your ground and see the victory the Lord will win for you today… The Lord will fight for you; you have only to keep still. (Exodus 14:13-14)

Well, we know what happened next: God parted the Red Sea, and 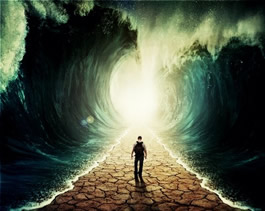 out of impossibility, God made the possible. So too, we are being tested at this moment. Will we trust or flee “back to Egypt”, back to the old place of comfort, the old addictions and Temptation to be Normal? But here is what Scripture says of “Egypt”, of the new Babylon that has surrounded us like an army:

Come out of her, my people, lest you take part in her sins, lest you share in her plagues; for her sins are heaped high as heaven, and God has remembered her iniquities. (Rev 18:4-5)

God is going to judge Babylon, and thus He is beckoning His Bride to leave her immediately. Therefore, the serpent stands at Babylon’s gates to prevent you from entering the desert in three ways:

A thousand distractions. If you are feeling bombarded by distraction after distraction, then this is a sure sign that the enemy is trying to keep you from hearing the voice of the Good Shepherd calling…

I have personally never felt such a constant bombardment against my soul as I have in recent months, to the point where writing at times becomes impossible. At the same time, the Lord has taught me that when I “seek first the Kingdom of God”, He always parts the sea of distraction enough to help me find my way to the refuge of His Heart. I seek first His Kingdom in two ways: by beginning my day in prayer, and then doing the duty of the moment with determination and love (see The Desert Path). When I fail in either of these, the torrents of distraction overwhelm me.

Thus it is also time to make some hard choices. We are living at an hour when one can easily enter into dissipated living, expending hour upon hour in meaningless entertainments from cruising “Facebook”, to playing video games, watching YouTube, surfing cable, etc. The call to the desert is a call to mortification. In this regard, I want to introduce you to my daughter Denise’s blog (the author of The Tree). She wrote a beautiful short meditation on fasting called Not Made for Tea.

As Pharoah’s armies closed in, there was great confusion and fear. The people turned on Moses and turned on the Lord.

After Pope Benedict resigned, I remember a warning ringing in my heart for several weeks that we 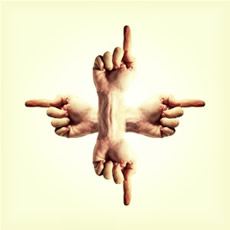 were going to enter into dangerous and confusing times.

And here we are.

We see the armies of a false church gathering in boldness and determination. In the midst of this, Pope Francis—rather than quoting the law and barring the doors against heretics—has, like Moses, led the “enemy” right to our doorstep. He has done so by repeating the same “scandalous” behavior of Christ who likewise invited tax collectors and prostitutes to dine with Him. And this has created confusion in those who wish to put the law first before love, who have created a walled city of comfort behind canons and catechisms.

We still have a great need to pray for our bishops and the Pope. There are many dangerous pitfalls directly ahead, such as the global elites’ push to control populations via an ideological “climate change” agenda. And yet, confusion will evaporate when we realize that it is Jesus, not Pope Francis, who is building His Church. What comes will come, and therefore is permitted by the Lord. But we have to be “wise as serpents” to recognize that this confusion is only a ruse to bring about further division.

People today are acting and reacting out of fear. So whether it is financial, emotional or spiritual insecurity, they lash out at others. This is only going to increase as the world unravels in the days and months ahead. The Israelites were brutally enslaved by Egypt, and yet, look at what they began to say as panic set in:

They wanted to return to pitiful subservience rather than trust the Lord! What is going to happen when the riots in Baltimore become the riots of North America because suddenly people do no know where their next meal will come from? Indeed, this has been one of the 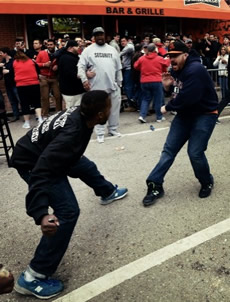 warnings I have given here over the years: that we have been “set up” for chaos so that, like the Israelites, we will be more than happy to be enslaved to a system that feeds and protects us rather than be free. [2]cf. The Great Deception – Part II We have seen this time and again in communist and socialist countries like Russia, North Korea, and Venezuela where the people saw their dictators like “fathers”, weeping and wailing when their often brutal captors died.

Well, the “errors of Russia” have spread throughout the world fostering and fomenting what is now a Global Revolution.

This modern revolution, it may be said, has actually broken out or threatens everywhere, and it exceeds in amplitude and violence anything yet experienced in the preceding persecutions launched against the Church. Entire peoples find themselves in danger of falling back into a barbarism worse than that which oppressed the greater part of the world at the coming of the Redeemer. —POPE PIUS XI, Divini Redemptoris, Encyclical on Atheistic Communism, n. 2; vatican.va

This Great Revolution is the Storm [3]cf. Seven Seals of Revolution I and others have been warning about—not the least, Benedict XVI:

…without the guidance of charity in truth, this global force could cause unprecedented damage and create new divisions within the human family… humanity runs new risks of enslavement and manipulation. —POPE BENEDICT XVI, Caritas in Veritate, n.33, 26

Don’t give in to this temptation to turn on your neighbour, whether it is the one next door or the one living in the Vatican. Instead, quiet your soul and come out of Babylon into the desert, because the Lord wishes to “speak persuasively” to your heart.

If the way is not yet clear, if the path forward is not certain, if you feel assailed by doubts, confusion, and divisions, then simply wait—wait for the Good Shepherd to come and lead you.

Do not fear! Stand your ground and see the victory the Lord will win for you today… The Lord will fight for you; you have only to keep still. (Exodus 14:13-14)

Be still so you can hear His voice…