THE NOW WORD ON MASS READINGS
for January 6th, 2014 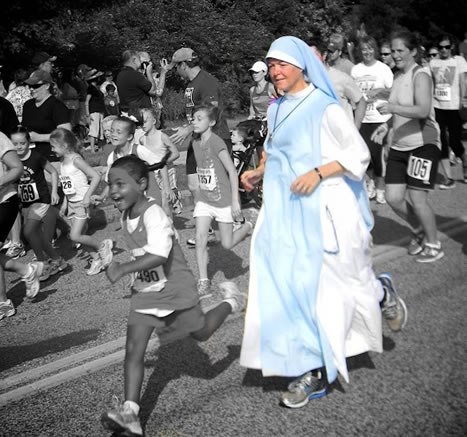 “The Running Nuns”, Daughters of Mary Mother of Healing Love

THERE is much talk among the “remnant” of refuges and safe havens—places where God will protect His people during coming persecutions. Such an idea is firmly rooted in the Scriptures and Sacred Tradition. I addressed this subject in The Coming Refuges and Solitudes, and as I reread it today, it strikes me as more prophetic and relevant than ever. For yes, there are times to hide. St. Joseph, Mary and the Christ child fled to Egypt while Herod hunted them; [1]cf. Matt 2;13 Jesus hid from the Jewish leaders who sought to stone Him; [2]cf. Jn 8:59 and St. Paul was concealed from his persecutors by his disciples, who lowered him to freedom in a basket through an opening in the city wall. [3]cf. Acts 9:25

But this is not the time to hide our light beneath a bushel basket! [4]cf. Lk 11:33 As the world descends into deeper darkness, it is the time for Christians to shine like stars [5]cf. Phil 2:15 and, as Pope Francis said recently, “Wake up the world!” [6]www.zenit.org

The ghost to fight against is the image of religious life understood as an escape or hiding place in face of an ‘external’ difficult and complex world. —POPE FRANCIS, Conversation with the Union of Superiors General of Men, Nov. 29th, 2013; nbcnews.com, Jan. 3, 2014

We know that the spirit of antichrist that St. John speaks of in the first reading is indeed “here, in the world.” That spirit, which rejects the divinity of Christ, has found a voice in many “false prophets,” [7]cf. Deluge of False Prophets Part I and Part II perhaps as in no other time in the Church’s history. As a result, we are witnessing the “removing of the restrainer,” [8]cf. Removing the Restrainer an unmitigated lawlessness spreading throughout the world. And so, we are disturbed. We want to run away and hide from it all. But St. John reminds us:

Children, you have already overcome these false prophets, because you are from God and you have in you one who is greater than anyone in this world.

We are co-heirs with Christ [9]cf. Rom 8:17 by virtue of our adoption through baptism. So to us, also, the Psalm applies: “Ask and I shall bequeath you the nations.” The nations are our inheritance—not lands, lakes and boundaries, per se, but the peoples of nations. It has been given to us the great, noble, and fulfilling task of making “disciples of all nations.” [10]cf. Matt 28:19 Thus, we can turn to today’s Gospel and see how we should respond in these times through Jesus’ example, and become true prophets through our witness.

John the Baptist had just been arrested—there was danger in the air. But rather than go into hiding, Jesus began his preaching with the message, “Repent, for the Kingdom of heaven is close at hand.” He began preaching the very message that had John the Baptist arrested in the first place! [11]cf. Mk 1:4 No, He did not run. Rather, Jesus began to walk among the suffering, diseased, and possessed “and he cured them.”

Jesus wants us to touch human misery, to touch the suffering flesh of others. He hopes that we will stop looking for those personal or communal niches which shelter us from the maelstrom of human misfortune and instead enter into the reality of other people’s lives and know the power of tenderness. —POPE FRANCIS, Evangelii Gaudium, n. 270

It is so easy to remain in those comfortable niches that can falsely give one the impression that he is really doing something for the Kingdom: going to daily Mass, [12]Of course, attending daily Mass and joining oneself to the Sacrifice of Jesus is a powerful intercession for the world. But we can also attend Mass, and never look our brother in the eye in the pew beside us…. attending cenacles, bouncing from conference to conference, prayer meeting to meeting… all the while remaining insulated from those who truly need the light of the Gospel. Yes, we need community—and I’m going to write more about this. But community is not an end, but a means to bring others to Jesus, and in fact, into the community itself. Too often, the Upper Room is mistaken as a refuge rather than an incubator to renew us and fill us with the Holy Spirit so that we can emerge as a true light in the marketplace.

We do not live better when we flee, hide, refuse to share, stop giving and lock ourselves up in own comforts. Such a life is nothing less than slow suicide. —POPE FRANCIS, Evangelii Gaudium, n. 272

St. John tells us how to differentiate between the spirits of God and those who live by the spirit of antichrist.

But even the devil admits this, yet he is not from God. What St. John means then is that, if we believe in Jesus, then we will do what he says: “love one another as he told us to.” This means not keeping hidden our life of faith, but incarnating the Gospel, giving it flesh for others to “taste and see the goodness of the Lord.” [13]cf. Ps 34:8 It means running alongside others; walking with them; suffering with them; weeping with those who weep; laughing with those who laugh; being the face of Christ that they have never seen before. It means touching their suffering flesh through our presence, concern, and spiritual and material resources. It means leaving our comfort zones and risking rejection… but also achieving miracles that otherwise will never happen without our “yes” to God.

…every person is worthy of our giving…. Consequently, if I can help at least one person to have a better life, that already justifies the offering of my life. It is a wonderful thing to be God’s faithful people. We achieve fulfillment when we break down walls and our heart is filled with faces and names! —POPE FRANCIS, Evangelii Gaudium, n. 274

The Church is being called into a “new phase of evangelization.” [14]cf. Evangelii Gaudium, n. 287 It is one where she must leave behind her comfort—leave behind her very self—and lay down her life for her neighbour in practical, tangible, living ways. Because it is only such saints, such holy men and women walking among us, that can possibly become the seed of a “new world.” [15]cf. Evangelii Gaudium, n. 269

Before we can battle against the spirit of antichrist, we must first fight the ghost of comfort.

The witness that can really attract is that associated with attitudes which are uncommon: generosity, detachment, sacrifice, self-forgetfulness in order to care for others… The Church must be attractive. Wake up the world! Be witnesses of a different way of doing things, of acting, of living! —POPE FRANCIS, Conversation with the Union of Superiors General of Men, Nov. 29th, 2013; ZENIT.org, Jan. 3, 2014