THE NOW WORD ON MASS READINGS
for January 7th, 2014 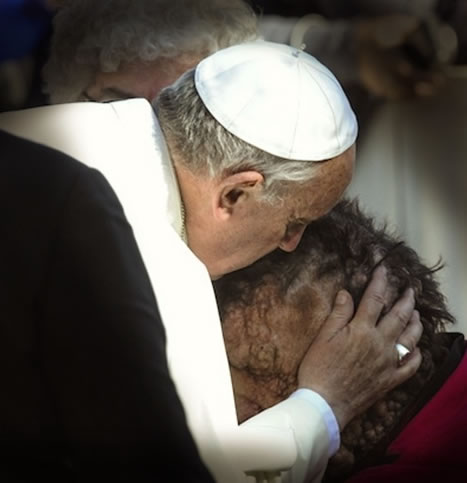 RECENTLY, someone wrote asking advice for what to do in situations with people who reject the Faith:

I know we are to be ministering and helping our family in Christ, but when people tell me they don’t go to Mass anymore or hate the Church…I am so shocked, my mind goes blank! I beg the Holy Spirit to come upon me…but I don’t receive anything…I have no words of comfort or evangelization. —G.S.

How as Catholics are we to respond to unbelievers? To atheists? To fundamentalists? To those who disturb us? To people living in mortal sin, within and without our families? These are questions I get asked quite often. The answer to all these is to love beyond the surface.

If we are to share our lives with others and generously give of ourselves, we also have to realize that every person is worthy of our giving. Not for their physical appearance, their abilities, their language, their way of thinking, or for any satisfaction that we might receive, but rather because they are God’s handiwork, his creation. God created that person in his image, and he or she reflects something of God’s glory. Every human being is the object of God’s infinite tenderness, and he himself is present in their lives. Jesus offered his precious blood on the cross for that person. Appearances notwithstanding, every person is immensely holy and deserves our love. —POPE FRANCIS, Evangelii Gaudium, n. 274

You might ask, “But how is someone living in sin “holy”? How is a crook, a murderer, a pornographer, or pedophile deserving of our love?” The answer is to look beyond the surface, beyond the cocoon of sin and weakness that distorts and hides the image in which each person is created. When Blessed Mother Teresa picked emaciated souls literally out of the sewage gutters of Calcutta, she did not poll them as to whether they were Catholic, Hindu, or Muslim. She did not ask if they faithfully attended Mass, had sex before marriage, used contraception, or were homeschooled. She simply loved beyond the surface of their condition, their religion, their “gender identity,” and so forth.

The Lord does not proselytize; He gives love. And this love seeks you and waits for you, you who at this moment do not believe or are far away. And this is the love of God. —POPE FRANCIS, Angelus, St. Peter’s Square, January 6th, 2014; Independent Catholic News

Could you walk into a hospital room and be Christ to a homosexual dying of AIDS who spent his life sleeping around with other men? You see, this is what St. John means in the first reading today:

Whoever is without love does not know God, for God is love.

And he clarifies what kind of love it is when he says:

In this is love: not that we have loved God, but that he loved us.

Jesus did not wait to come into the world until we were holy. He did not enter time when everyone was churched and saintly. He became one of us when we least deserved His love. And what did He do? He dined in the sinner’s house, reached out to the prostitute, conversed with the tax collector. Yes, we know this… so why do we turn green when the sinner, prostitute and tax collector stand in our doorway? We have to love beyond the surface, which is what Jesus did. What He saw in Zacchaeus’, Mary Magdalene’s, and Matthew’s eyes was the image in which they were created. That image, though distorted by sin, did not lessen their inherent dignity, a dignity which is holy, awesome, and unparalled in creation.

I have a dogmatic certainty: God is in every person’s life. God is in everyone’s life. Even if the life of a person has been a disaster, even if it is destroyed by vices, drugs or anything else—God is in this person’s life. You can, you must try to seek God in every human life. Although the life of a person is a land full of thorns and weeds, there is always a space in which the good seed can grow. You have to trust God. —POPE FRANCIS, Interview, americamagazine.org, September, 2013

So when the Psalmist says, “He shall defend the afflicted among the people, save the children of the poor,” this is what it means: Jesus comes to defend the dignity of each and every person (and of course, the highest defense of a soul is to attain its salvation. Therefore, the call out of sin is intrinsic to love. But the “first proclamation” our presence and actions must transmit to another is that they are loved. Then, says Pope Francis, “It is from this proposition that the moral consequences then flow…” [1]americamagazine.org, September 2013 ) And so when you stand before someone who is an antagonist, who is troubled, rebellious, vile, angry, hurting, lonely, lost… they are the afflicted and poor who need the love of Christ. They need to be received, as they are, in that moment, with unconditional love. How? Give the beggar a coin. Listen to the atheist’s arguments with patience. Extend hospitality to the one who is naked, hungry, and in the prison of sin.

The ministers of the Gospel must be people who can warm the hearts of the people, who walk through the dark night with them, who know how to dialogue and to descend themselves into their people’s night, into the darkness, but without getting lost. —POPE FRANCIS, americamagazine.org, September 2013

As Jesus says in today’s Gospel when the Apostles told Him that the thousands were hungry:

Give them some food yourselves.

“But give them what?”, the Apostles ask—the same question as my reader above. Remarkably, Jesus feeds the people from what they gave Him: five loaves and two fish. So too, when you are with others, do not be so concerned that they are on the same page as you so much as you are on the same page with them. That is, identify with their hurt; listen to their sorrow; understand their anger. Recognize that what you are hearing and seeing is often the mask and wounded heart that obscures the child of God within. Take what they give you in the moment: the five loaves and two fish of their spiritual and physical poverty, and by your love and intercession, present it to the Lord. He then, in His own time, will multiply your act of love in His own way.

We may be sure that none of our acts of love will be lost, nor any of our acts of sincere concern for others. No single act of love for God will be lost, no generous effort is meaningless, no painful endurance is wasted… It may be that the Lord uses our sacrifices to shower blessings in another part of the world which we will never visit. The Holy Spirit works as he wills, when he wills and where he wills; we entrust ourselves without pretending to see striking results. —POPE FRANCIS, Evangelii Gaudium, n. 279

When people realize they are loved, walls begin to fall—maybe not right away; maybe not ever in your presence… But no love is ever wasted or lost because “God is love.” And if we are made in the image of Love, then beneath the surface of our wounded hearts, therein lies God. It is He whom we must seek to see and love in the other, most especially the “least of our brothers.”