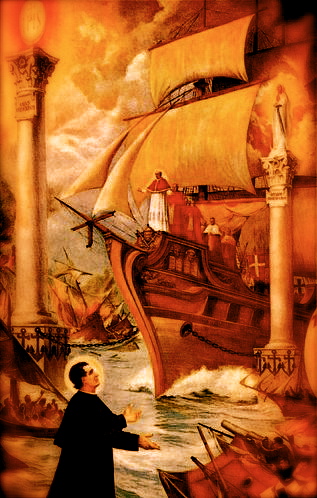 AS I mentioned recently, the word remains strong on my heart, “You are entering dangerous days.” Yesterday, with an “intensity” and “eyes which seemed filled with shadows and concern,” a Cardinal turned to a Vatican blogger and said, “It is a dangerous time. Pray for us.” [1]March 11th, 2013, www.themoynihanletters.com

Yes, there is a sense that the Church is entering unchartered waters. She has faced many trials, some very grave, in her two thousand years of history. But our times are different…

…ours has a darkness different in kind from any that has been before it. The special peril of the time before us is the spread of that plague of infidelity, that the Apostles and our Lord Himself have predicted as the worst calamity of the last times of the Church. And at least a shadow, a typical image of the last times is coming over the world. —Blessed John Henry Cardinal Newman (1801-1890), sermon at opening of St. Bernard’s Seminary, October 2, 1873, The Infidelity of the Future

And yet, there is an excitement rising up in my soul, a sense of the anticipation of Our Lady and Our Lord. For we are on the cusp of the greatest trials and the greatest victories of the Church.

I think again of a powerful letter a friend sent me several years ago, along with a picture of St. John Bosco’s Dream of the Holy Father steering the Barque of Peter through treacherous waters, amid venemous enemies, into an period of peace. She said that my ministry would help to anchor souls to the Two Pillars of the Eucharist and Mary in Bosco’s dream. I remember weeping from the core of my soul as I read her unexpected letter.

As I look back now at the Rosary CD I produced, the Divine Mercy Chaplet, and the evenings of Eucharistic Adoration I have been priviledged to lead with many holy priests, as I will again tonight, I can’t help but smile as I ponder Bosco’s dream. Moreover, this ministry has been one of repeating the prophetic and powerful words of the Holy Fathers that seem to cut through the fog of apostasy like a blaring beacon of light on the harbor’s edge.

The new Pope, putting the enemy to rout and overcoming every obstacle, guides the ship right up to the two columns and comes to rest between them; he makes it fast with a light chain that hangs from the bow to an anchor of the column on which stands the Host; and with another light chain which hangs from the stern, he fastens it at the opposite end to another anchor hanging from the column on which stands the Immaculate Virgin.—https://www.markmallett.com/blog/2009/01/pope-benedict-and-the-two-columns/ 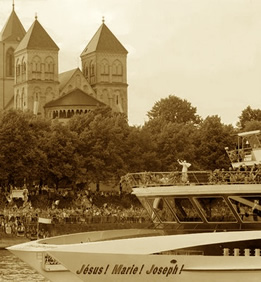 Shortly before he died, John Paul II declared the Year of the Rosary (2002-03). This was followed by the Year of the Eucharist (2004-05) with his documents on the Eucharist and the Liturgy. Indeed, John Paul II’s “last will and testament” to the Church was to steer the Church firmly between the the Two Pillars. Pope Benedict did not miss a beat, saying shortly after he was elected, that he would mostly continue the legacy of John Paul II. He stunned many of us as he rode into Sydney’s harbour for World Youth Day, standing at the bow of a ship, coincidentally dressed like the popular painting of Bosco’s dream! 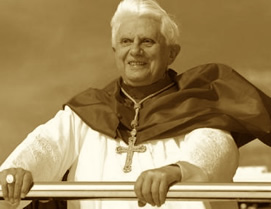 The enemy ships attack with everything they’ve got: bombs, canons, firearms, and even books and pamphlets are hurled at the Pope’s ship. At times, it is gashed open by the formidable ram of an enemy vessel. But a breeze from the two pillars blows over the broken hull, sealing the gash. —Dream of the Two Pillars

And now, as the Cardinals begin their voting, we pray for the next successor of Peter to be raised to the helm with divine strength and courage to continue to guide the Church through stormy waters toward an Era of Peace.

John Bosco’s dream is not of one pope, but several over a period of time since the Vatican Councils, it would seem (read Pope Benedict and the Two Columns). At one point, Bosco even sees one of the Pope’s killed. But yet, another rises in his place.

…And a great calm comes over the sea.

The Church will suffer. She is going to be persecuted. We are heading into the greatest of trials… but the greatest of victories. For the Barque of Peter will not be thwarted. Jesus Christ will prevail as He crushes, through and with Our Lady, the powers of darkness that will, in the end, collapse upon themselves.

You are Peter, and upon this rock I will build my church, and the gates of the netherworld shall not prevail against it. (Matt 16:18)

Please consider tithing to this full-time apostolate.
We are always in need. Thanks so much.